Day #1 of a two-day CODHy 2018 has wrapped up here in Tel Aviv, and we’re bringing you our top six highlights from the day, with commentary from Drs. Mikhail Kosiborod, Ralph DeFronzo, Jaakko Tuomilehto, and many more!

In case you missed it, here’s our CODHy preview for a look at what we’ll be seeing tomorrow – highlights include Dr. Simon Heller on hypoglycemia, Prof. Moshe Philip on progress toward an artificial pancreas, and a serious presence of digital therapy on the agenda.

Dr. Mikhail Kosiborod presented a new diabetes management paradigm, where treatment is determined based on a patient’s status of CV disease – see the image below for an overview. He arrived at this algorithm based on findings from CVOTs of GLP-1 agonists, SGLT-2 inhibitors, DPP-4 inhibitors, and TZD pioglitazone. For people with CV risk factors only, Dr. Kosiborod suggested that GLP-1s and SGLT-2s are appropriate. Individuals with recent stroke should take pioglitazone, per his guidelines, while GLP-1s and SGLT-2s are also ideal for diabetes patients with a history of stroke/MI or with established coronary disease. Why should therapy be chosen according to the CV disease spectrum? As Dr. Kosiborod put it, CV disease remains the leading cause of death for people with type 2 diabetes, and it’s well-accepted that a diabetes diagnosis leads to residual CV risk. While comorbidities, contraindications, and A1c/glycemic targets should also be factored into treatment decisions, Dr. Kosiborod pointed out happily that the agents we now know to reduce CV risk are also some of the more effective glucose-lowering drugs. This paradigm shift in diabetes care, with cardioprotection at the center, is starting to take hold: The ADA’s 2018 Standards of Care contains a formal recommendation for cardioprotective drugs (SGLT-2 empagliflozin and GLP-1 liraglutide are specifically called out) in people with established CV disease. Despite the fact that better glucose control has not been empirically linked to improved CV outcomes or lower all-cause mortality, we do see value in the two-for-one combination of glucose-lowering and cardioprotection, especially when it comes to convincing regulators, payers, and diverse HCPs of the utility of these newer agents. As Dr. Kosiborod explained, the way you lower glucose is extremely important: DPP-4 inhibitors don’t improve CV outcomes, but GLP-1 agonists and SGLT-2 inhibitors do. 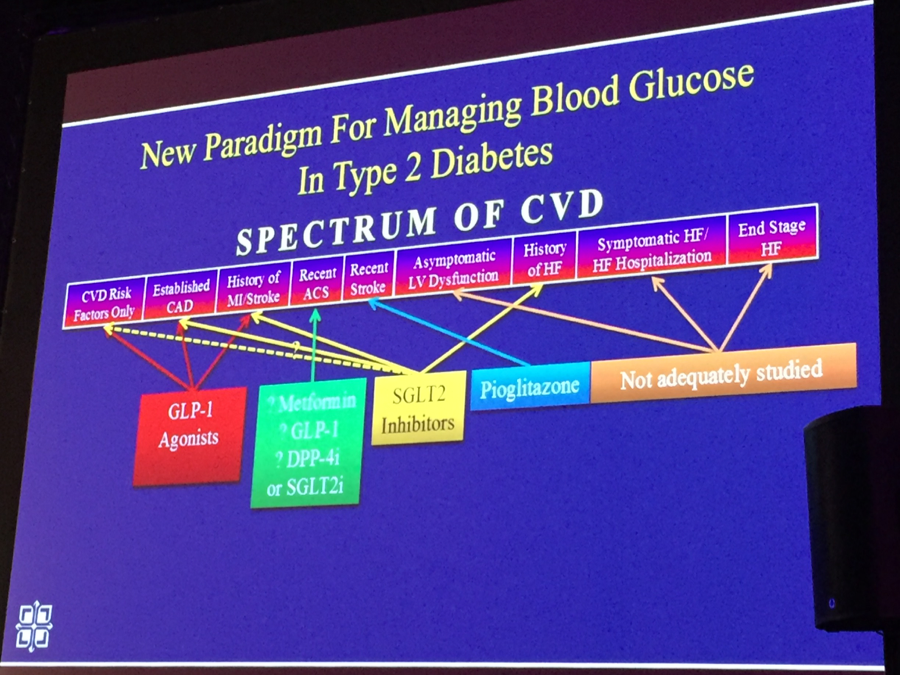 Dr. Ralph DeFronzo challenged diabetes treatment algorithms and current prescription habits by introducing his “Fab Four” of therapy – SGLT-2 inhibitors, GLP-1 agonists, TZD pioglitazone, and metformin. He particularly praised GLP-1 agonists: “Why would you not use this as first-line therapy in every single one of your patients?” While this line of thinking isn’t new from Dr. DeFronzo (read about his ringing endorsements of GLP-1s, SGLT-2s, and pioglitazone at last year’s CODHy gathering in Buenos Aires and at the WCTD conference in Berlin), this was the debut of the term “Fab Four.” We have to say: The name is catchy, highlighting the superior effectiveness of more advanced drug classes (GLP-1s, SGLT-2s), as well as the growing importance of cardioprotection in diabetes care. As Dr. DeFronzo pointed out, gut peptides GLP-1 and GIP account for 60%-70% of the insulin secreted after a meal, making them absolutely essential for normal glucose tolerance. Moreover, they counteract beta cell failure, which is an important role of anti-hyperglycemic therapy and is all but necessary for sustained A1c reduction. Dr. DeFronzo pointed to a 2003 study showing that liraglutide (Novo Nordisk’s GLP-1 agonist Victoza) returns beta cell function to the levels expected of someone without diabetes. He expressed distinct enthusiasm for Novo Nordisk’s oral semaglutide as well as Intarcia’s ITCA 650 (implantable exenatide mini pump). While we think most patients (and providers) would be resistant to first-line therapy with an injectable, we also fully appreciate and endorse the ethos of earlier, more aggressive treatment to fight diabetes progression. Oral semaglutide and an implantable mini pump that lasts for three-six months (initiation phase and maintenance phase, respectively) could very well increase the number of patients who start on GLP-1 earlier in the course of disease, if not first-line, given the reduced or eliminated injection burden. That said, before we get too far ahead of ourselves, we note that awareness of and reimbursement for GLP-1s will have to improve remarkably to increase prescription volume. According to a Diabetes Care article published last year, only 7% of second-line diabetes prescriptions in the US go to a GLP-1 agonist; the majority (46%) still go to an SU, and only 7% go to an SGLT-2 inhibitor.

During an afternoon panel, Drs. John Wilding, Agostino Consoli, and Baptist Gallwitz discussed the plausibility of using SGLT-2 inhibitors, GLP-1 agonists, and DPP-4 inhibitors to treat prediabetes. Said Dr. Wilding: “This is an evidence-free zone, but that doesn’t prevent any of us from having something to talk about.” We love this perspective, and we agree that productive conversation should continue around possible prediabetes drugs, despite resistance from regulators to consider a prediabetes indication (to be sure, there are challenges here, but many thought leaders have criticized FDA’s hesitation to approve metformin for prediabetes). Outlining the case for SGLT-2 inhibitors, Dr. Wilding cited compelling reductions in A1c and body weight (a key risk factor for type 2) with these agents in the diabetes population, though there are no published trials to-date on the use of SGLT-2s in prediabetes. Additionally, Dr. Wilding pointed to the much-discussed CV benefit of two SGLT-2 inhibitors – Lilly/BI’s Jardiance (empagliflozin) and J&J’s Invokana (canagliflozin) – as seen in EMPA-REG OUTCOME and CANVAS. He suggested that these benefits for people with diabetes at high CV risk could very well extend to the prediabetes population. Risk reduction for atherosclerotic CV events might be somewhat muted if prediabetes patients face lower CV risk to start; then again, prediabetes is a known risk factor for CV disease, and these individuals may already have significant atherosclerosis. Moreover, there have been some hints that SGLT-2s may exhibit a heart failure benefit entirely independent of glycemia: A post-hoc of CANVAS found significant risk reduction for heart failure in the primary prevention cohort (whereas three-point MACE was not significantly reduced among these lower-risk patients), and Dr. David Fitchett shared data from EMPA-REG OUTCOME attributing empagliflozin’s heart failure benefit to volume effects, which apply outside the context of diabetes. Dr. Subodh Verma has explained that diastolic dysfunction (a precursor to heart failure) appears earlier in the course of diabetes progression than does atherosclerosis, defending earlier use of SGLT-2 inhibitors – possibly even in prediabetes. All this said, Dr. Wilding returned to the issue of plausibility. He noted that SGLT-2s for prediabetes is a milestone “unlikely to happen in the foreseeable future,” given the time it would take to complete a large-scale trial in prediabetes and the steep cost of SGLT-2 inhibitors relative to other candidate drugs for prevention, namely metformin. There may be some opportunity to investigate the impact of SGLT-2 therapy in prediabetes within the EMPEROR and Dapa-HF trials, of course, and we very much hope this is happening. These studies are recruiting participants with chronic heart failure, with or without type 2 diabetes, so presumably, there will be a cohort of patients with prediabetes at baseline randomized to SGLT-2 inhibitor (Jardiance or Farxiga) or to placebo. We’re eager to find out how these advanced oral agents perform as heart failure treatment distinct from diabetes and glucose-lowering, and to probe for effects in the prediabetes population. We’ll have to wait until June 2020 for the EMPEROR program to wrap up, while Dapa-HF is expected to complete in December 2019. We are counting the months …

4. CV/Renal Benefits Should Dictate Therapy Selection in Diabetes, According to Dr. Enzo Bonora; Uncertainty Abounds in How to Treat Primary CV Prevention Patients (Until DECLARE and REWIND Report?)

Echoing earlier sentiments from Dr. Mikhail Kosiborod, Dr. Enzo Bonora argued that the number of different therapy classes now available enables genuine personalization of diabetes care, but that CV and renal benefits should dominate therapy selection (as below). Dr. Bonora called this “treat to benefit” rather than “treat to target,” which we love and will be repeating. He drew the most significant distinction in therapy choice between primary and secondary prevention of CV disease. Evidence for secondary prevention (i.e. those with established CV disease) is quite robust given positive SGLT-2 and GLP-1 CVOTs, despite the fact that this reflects only ~25% of patients with type 2 diabetes in the real world. Nevertheless, Dr. Bonora characterized the evidence as quite strong for adding SGLT-2 inhibitors, GLP-1 liraglutide (Novo Nordisk’s Victoza), or TZD pioglitazone to metformin (unless not indicated/contraindicated) to prevent subsequent CV events in these patients with a prior history. In contrast, he suggested that there’s a relative dearth of CVOT evidence when it comes to patients without established CV disease: While there are many options to choose from, there are few certainties and few head-to-head comparisons to inform decision-making. By our count, all reported CVOTs of GLP-1 agonists and SGLT-2 inhibitors enrolled 66%-100% secondary prevention cohorts, with most enrolling >80% in secondary prevention. As such, choosing therapy for primary prevention is complicated and less evidence-based right now (studies like DECLARE for AZ’s SGLT-2 dapagliflozin and REWIND for Lilly’s GLP-1 dulaglutide could start to change this, as both CVOTs – reporting this year – have recruited a majority primary prevention population). For the primary prevention patient today, an HCP might balance various benefits (glucose-lowering, CV risk factor improvement, microvascular disease prevention) and risks (hypoglycemia, other adverse effects) – there’s room for more personalization here, but also more room for interpretation. 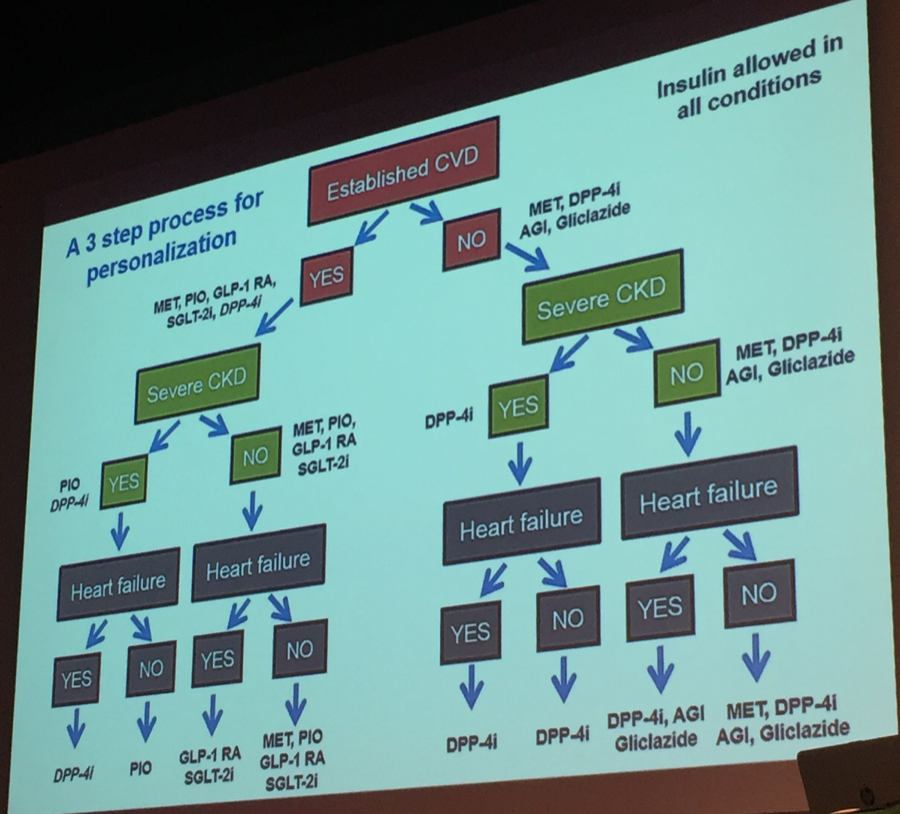 5. Dr. Jaakko Tuomilehto on Diabetes Screening: “It Sounds Simple, But It’s Not”

In a compelling session on diabetes prevention, Dr. Jaakko Tuomilehto discussed the surprising controversy that surrounds diabetes screening and its potential benefits. As the lead investigator on the first-ever diabetes prevention RCT, the Finnish Diabetes Prevention Study, Dr. Tuomilehto is an esteemed expert on prevention, a field that is still very much emerging. When it comes to screening for hyperglycemia, Dr. Tuomilehto highlighted several unresolved questions: What measure or combination of measures should be used as the basis of diabetes screening? Should we screen for prediabetes as well as overt diabetes? How often should screening take place within a population, or for an individual? Perhaps most importantly, does screening actually produce long-term improvements in health outcomes?

6. NASH: The Epitome of “Controversies to Consensus” at CODHy

Israeli gastroenterologist Dr. Ran Oren outlined the numerous disputes surrounding NAFLD/NASH (fitting for a conference on “controversies to consensus”). As a relatively uncharted and under-recognized disease state, NAFLD/NASH is riddled with controversy at every level – from screening to diagnosis to management to recommended health systems approaches to the growing epidemic of fatty liver disease. Dr. Oren hit on the following key issues: