In our interpretation, these results are highly positive, confirming Invokana’s renal-protective capacity and impact on both heart failure and MACE outcomes, while also supporting safety – including amputation risk – in a high-risk population.

Here are the topline results of the trial in one table: 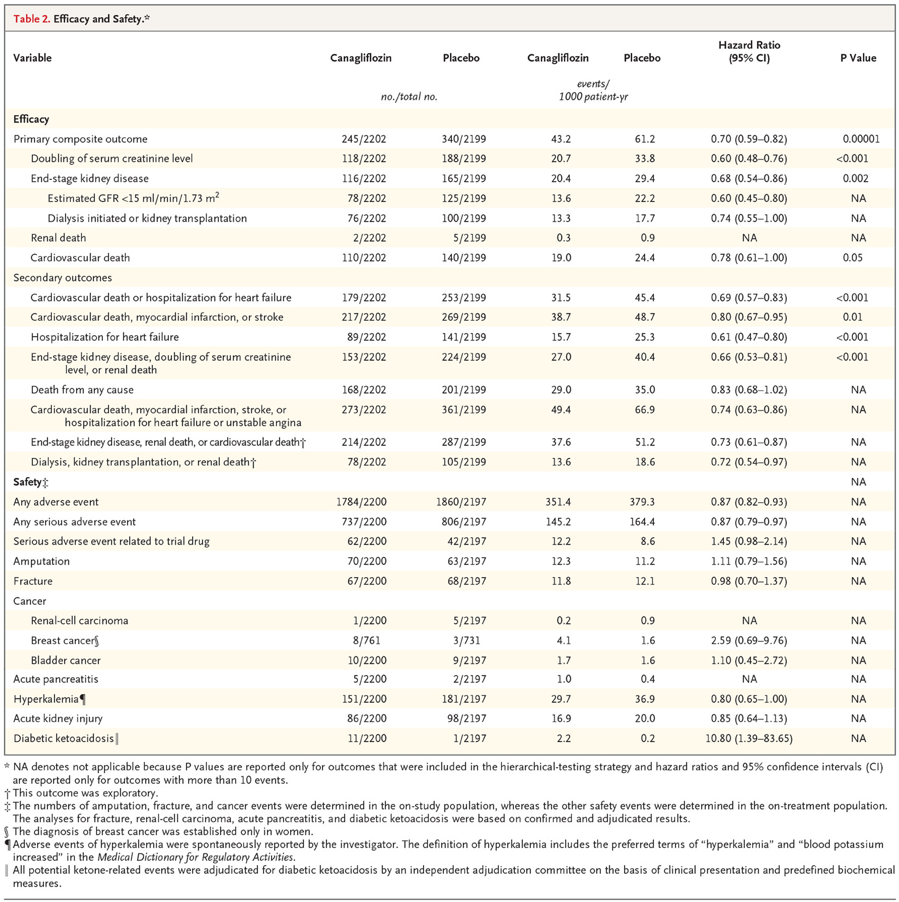 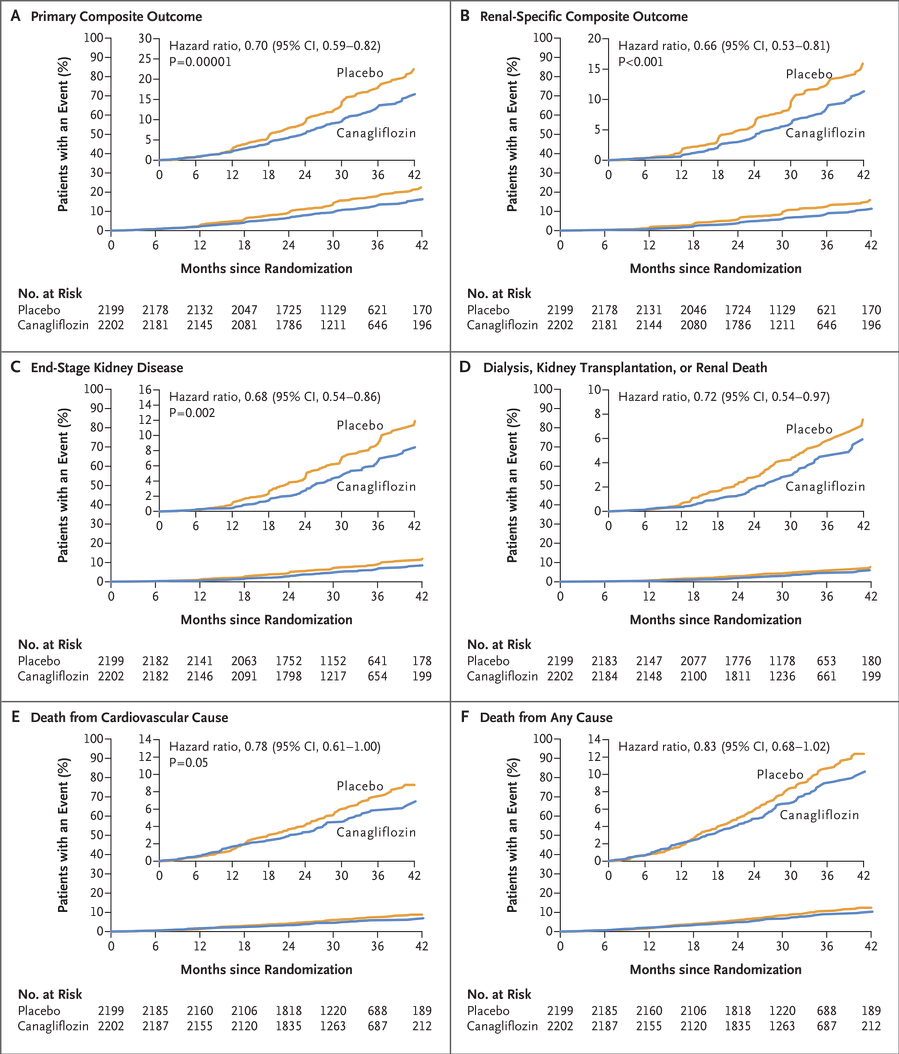 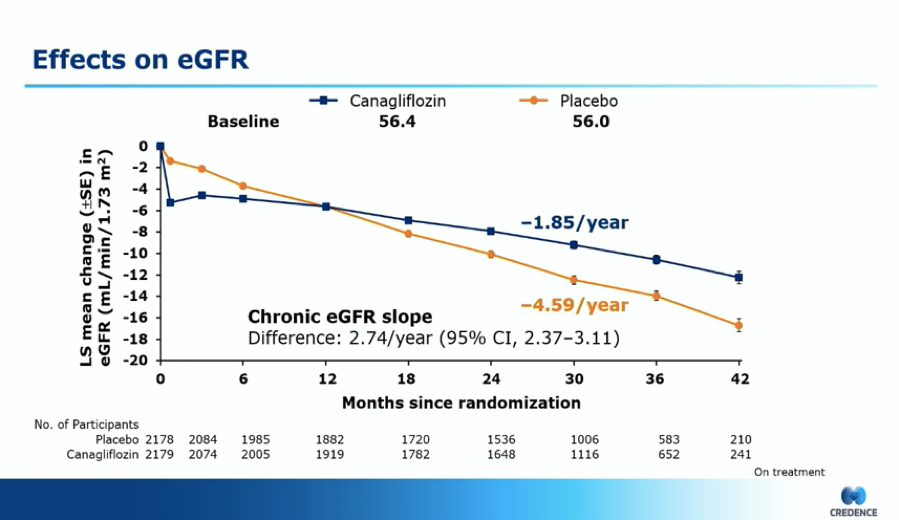 There were no significant between-group differences for any renal event in CREDENCE, suggesting similar benefit regardless of baseline eGFR or UACR. While there did seem to be a trend toward greater benefit in those with a baseline UACR ≤1,000 (a lower risk population) compared to those >1,000 (see below), the same trend did not exist with eGFR (see below). Most importantly, the renal benefit remained in those with an eGFR between 30 and 45 ml, a population for which Invokana 100 mg (the dose investigated) is not yet recommended. This makes a compelling case for the indicated population of Invokana to be broadened to this population as part of any potential renal indication (see more below). 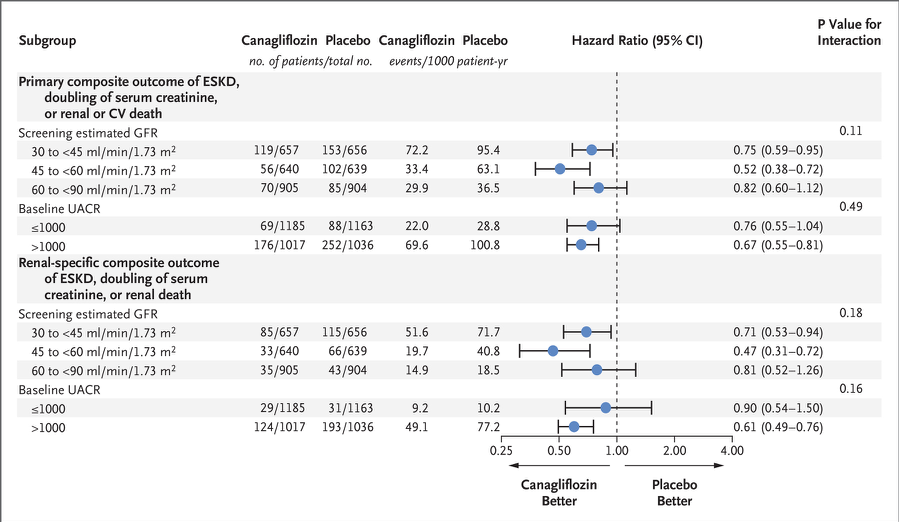 As a reminder, all 4,401 CREDENCE participants had type 2 diabetes, Stage 2 or 3 CKD (eGFR ≥30 to <90 ml/min/1.73 m2), and macroalbuminuria (UACR >300 to ≤5,000 mg/g). All were receiving maximum-tolerated ACE inhibitors or ARBs – meaning the risk reduction was on top of standard-of-care for CKD. In a conversation with our team, Dr. James List (Global Therapeutic Area Head, CVM, Janssen R&D) emphasized the renal effect with Invokana is “as large if not larger” than that seen with these antihypertensives. At baseline, mean eGFR was 56 ml, UACR 927 mg/g, BP 140/78, and A1c 8.3%; 50% had established CV disease, 15% known heart failure, and 5% prior amputations. This compares to ~66% with CVD (compared to 50% with CVD in CREDENCE) and a mean eGFR of 77 ml in CANVAS – so, overall a sicker population in CREDENCE. See the study design and baseline characteristics paper for more, and check out the figure below used to develop this point by several speakers at the presentation. 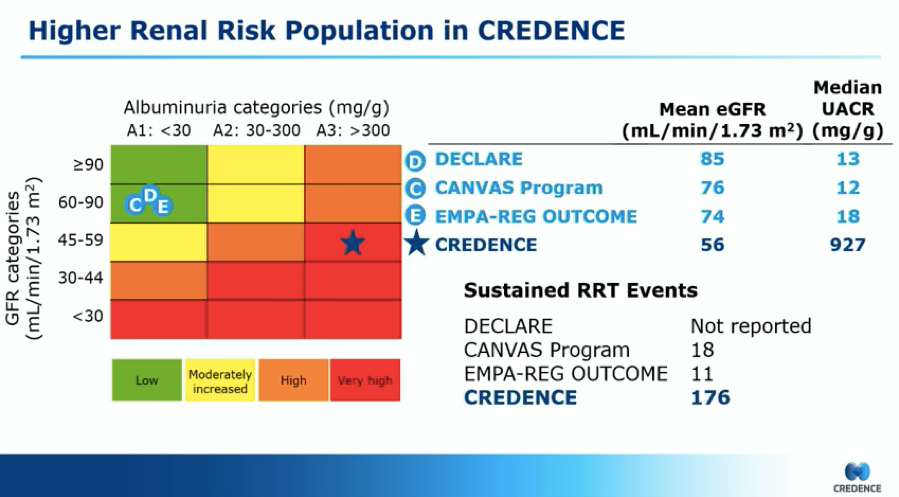 It’s difficult to understate the importance of these findings for people with diabetes, particularly those with diabetes that has progressed beyond what current interventions can provide. As thought leaders have pointed out, SGLT-2 inhibitors represent the first innovation in CKD in ~20 years. Slowing the progression of kidney disease is a tremendous win for patients and providers, particularly as data show the burden of CKD is increasing, with diabetes as the primary cause of renal failure. Per the CDC, CKD prevalence among adults with diabetes rose from 4.1% in 2006 to 7.2% in 2015 – we are uncertain if the 2006 rate was not properly assessed or if the growth is actually hypergrowth (nearly doubling in nine years is not normal growth). 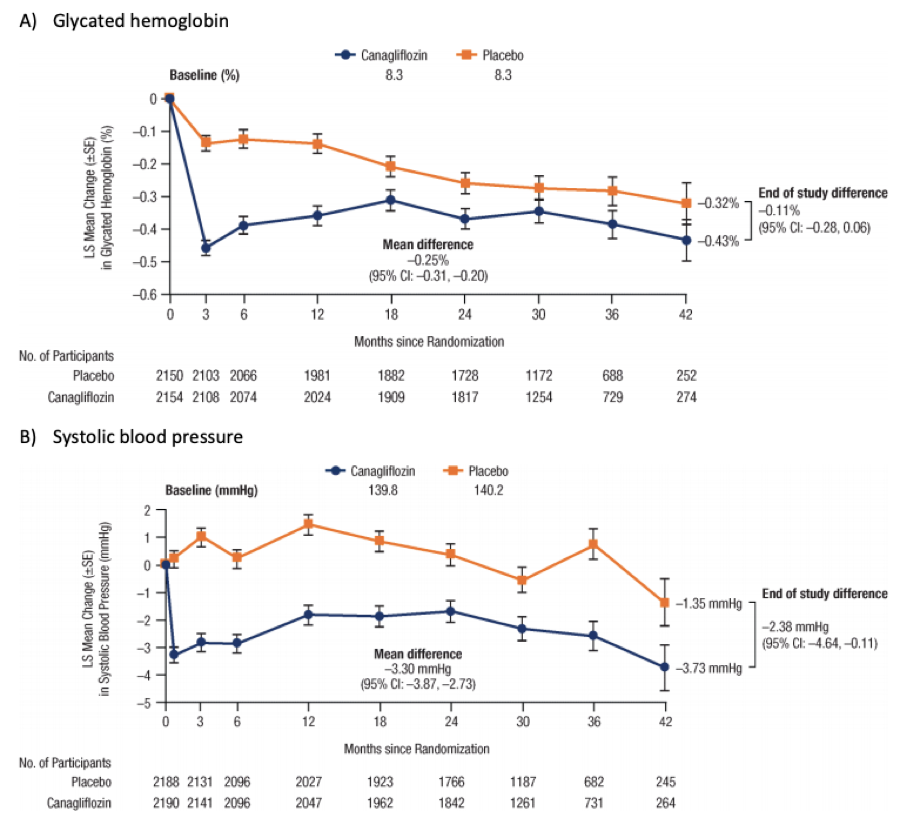 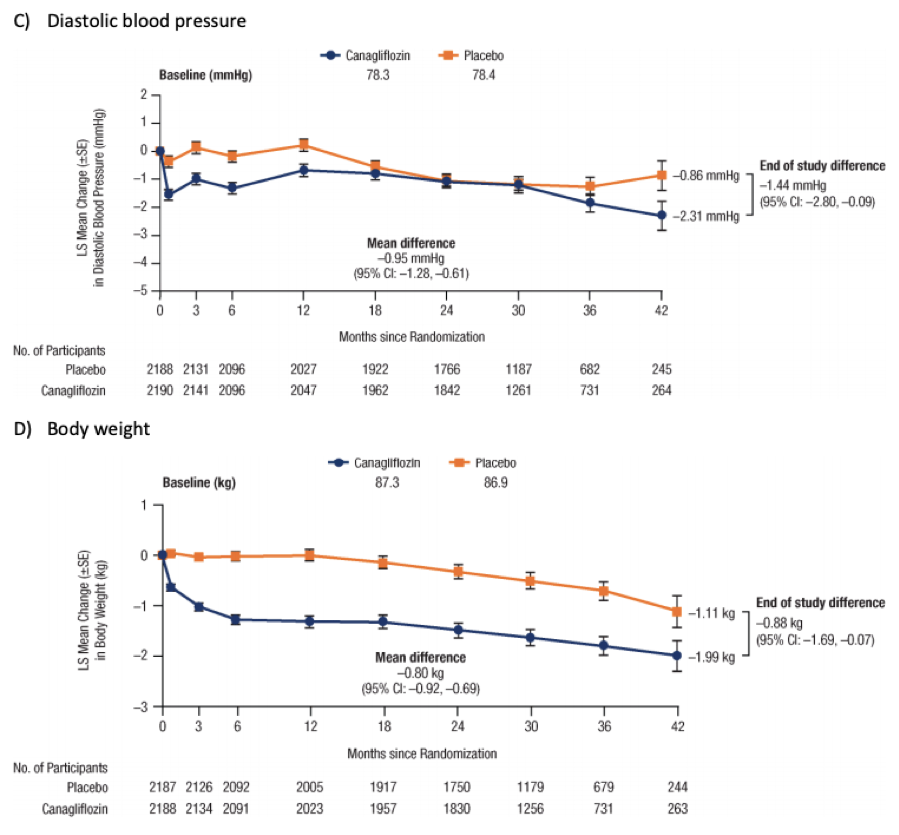 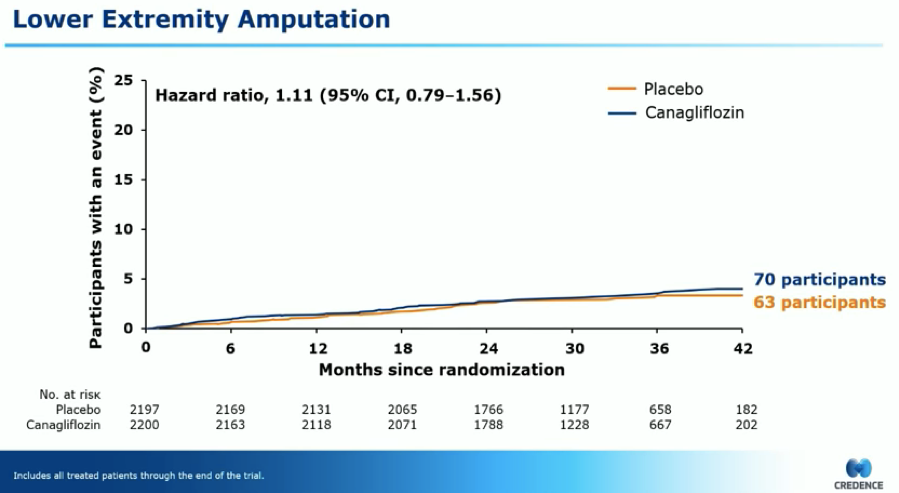 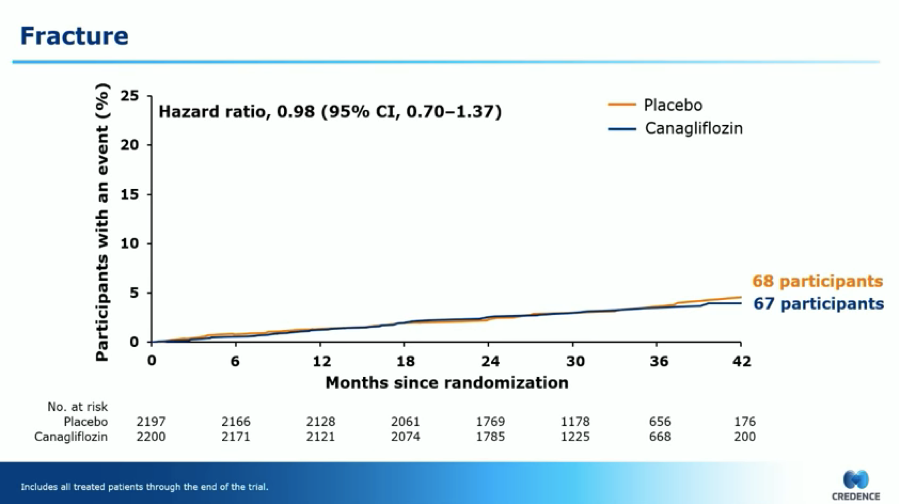 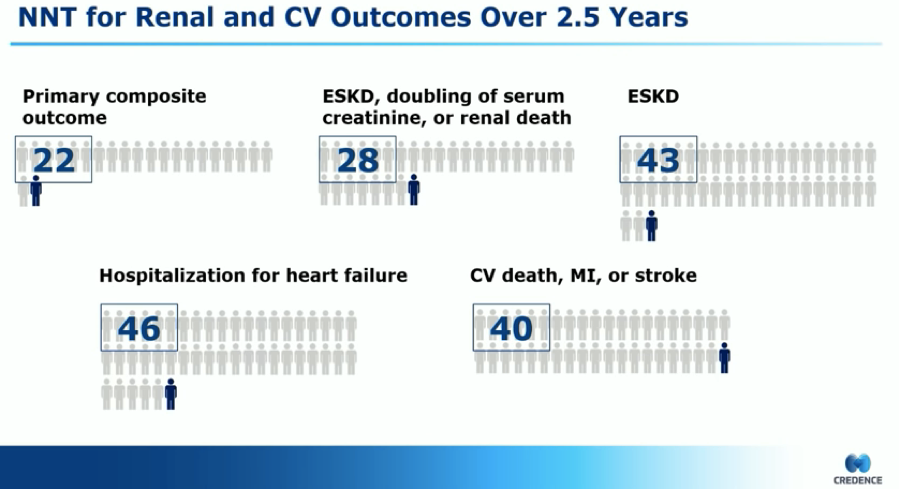