Medtronic reported its 4Q20 (F3Q21) financial results this morning on a call led by CEO Geoff Martha and CFO Karen Parkhill. Diabetes and Cardiovascular President Sean Salmon also joined the call for Q&A. We love it by the way what a big job he has and is moving through it so well. Diabetes is on slide 11 and see our top highlights below. 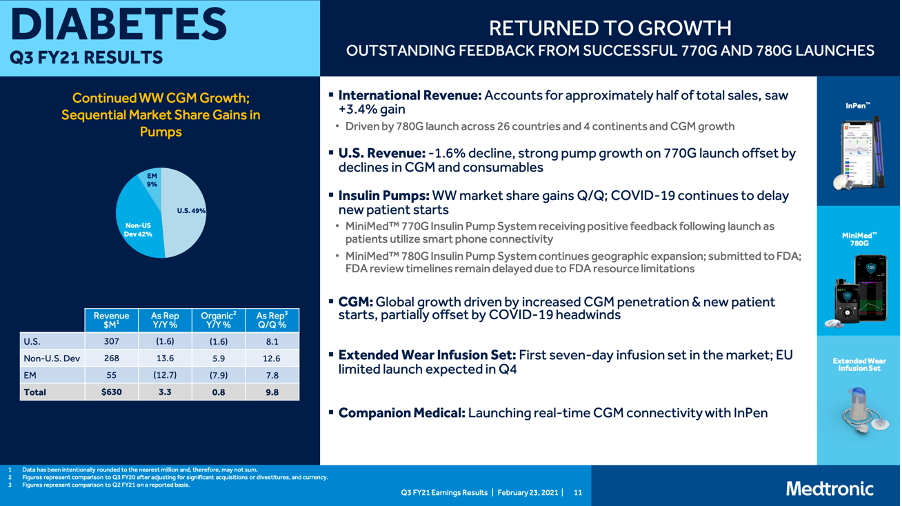 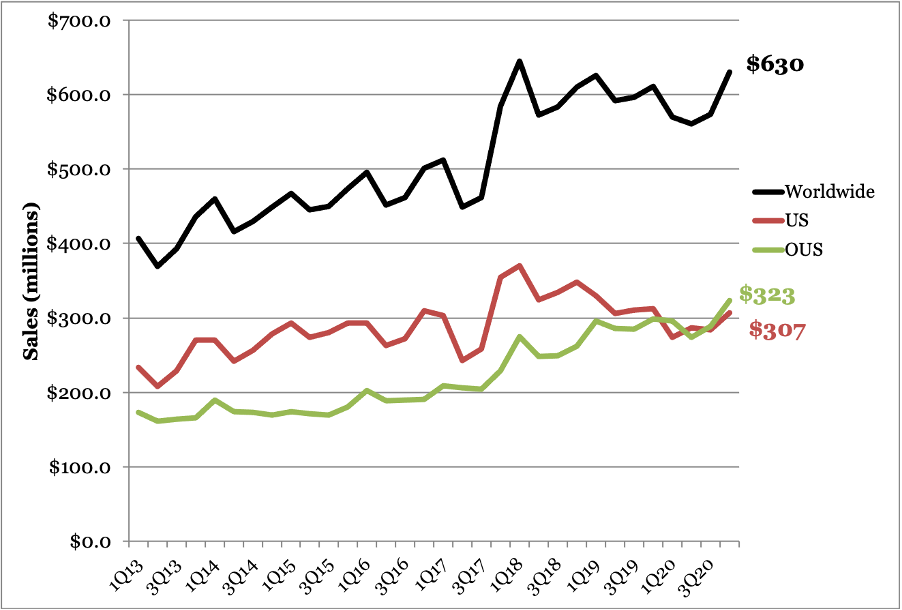 Medtronic reported 4Q20 (F3Q21) total Diabetes revenue of $630 million, its highest quarterly revenue in Diabetes since 1Q18 ($645 million) and second highest ever. This fourth calendar quarter also represented Medtronic’s first and only quarter of YOY growth in 2020, with revenue rising 3% as reported YOY in 4Q20. Sequentially, revenue grew an impressive 10% from 3Q20. The strong 4Q20 results come well above 3Q20 expectations for Diabetes to decline in “the low single digits” in 4Q20. While CEO Geoff Martha acknowledged that Medtronic is still not growing at the same pace as the larger diabetes device market (see Abbott 4Q20 and Dexcom 4Q20 and Insulet 4Q20; we’ll hear from Tandem later this week), the return to growth is promising with momentum being driven by “successful launches of [Medtronic’s] 770G system in the US and the 780G, which is now available in 26 countries.”

Note that the number of countries in which 780G is available more than doubled from calendar 3Q20, when it was merely a dozen. 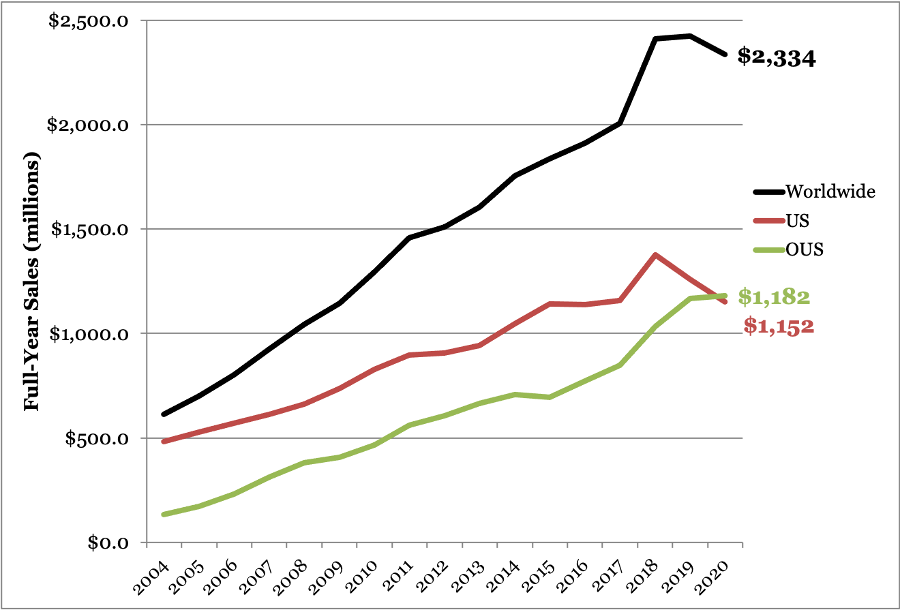 2. No traditional guidance provided, but broader commentary on COVID-19 recovery; Diabetes expected to grow in “high single digits” in 1Q21

As has been the case for the last three quarters, Medtronic again chose not to share guidance with the COVID-19 pandemic continuing to linger – we think that’s smart. According to CFO Karen Parkhill, the pandemic continued to pressure sales “in the first couple weeks of February,” but trends are improving. Looking at 1Q21 (F4Q21), Medtronic expects April to be stronger than March and March to be stronger than February. If recovery trends as expected, Ms. Parkhill estimated organic revenue growth of 30%-34% YOY for the entire company. For context, Medtronic saw a 25% YOY decline in 1Q20 due to COVID-19 impact. Diabetes is expected to grow much slower than the broader company with YOY growth expected in the “high single digits.” The slower growth in Diabetes is to be expected – again using 1Q20 for reference, Diabetes declined just 1% YOY, while the overall company declined 25% YOY.

Likewise, Medtronic includes representative patient perspectives early on in the product development process and ensures that marketing representation matches the diversity of patients: “We are looking at the entire journey from market research, product development, clinical research to marketing commercialization assets making sure that we are being inclusive and representative throughout.” We applaud this mindset and feel strongly that it can drive actionable change moving forward, particularly with leaders like Sean Salmon and Julie Foster at the top, along with many others in addition to Grant, Farkas, Dianaty, Baker, and others.

At CES 2021, we attended a talk on addressing racial and gender bias in the development and testing of AI, and we believe that the lessons of that talk apply everywhere in product development and particularly in diabetes technology, which has seen marked disparities in who accesses and uses products. Looking ahead, Medtronic will refine its broad efforts as it learns from its first year executing on its health equity strategy, for example, by working with community health workers to implement training and education on diabetes management, technology, and access programs. 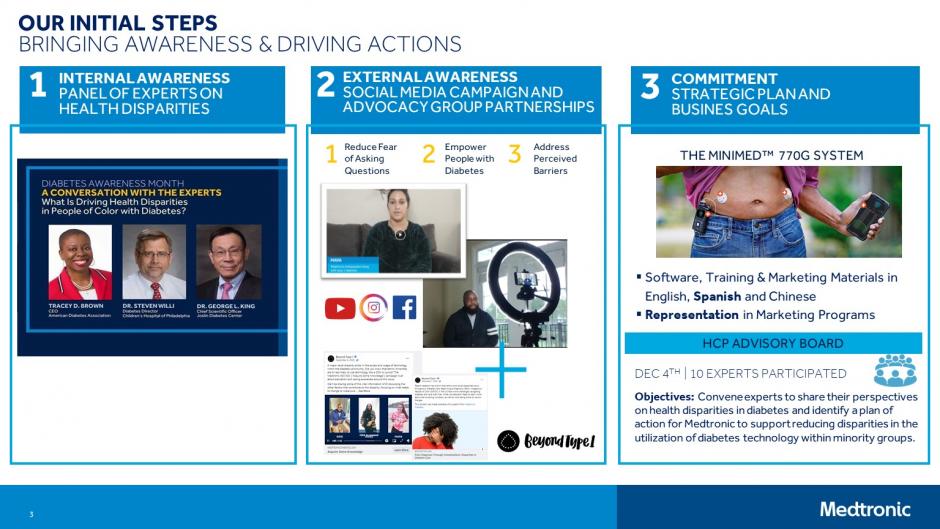 MiniMed 780G is now available “in 26 countries across four continents,” marking a significant expansion from “twelve countries” in 3Q20. As a reminder, we first learned that MiniMed 780G had launched in Europe during Medtronic’s 2020 Analyst Day in October 2020, four months after receiving CE-marking in June. During Q&A, Mr. Salmon expressed that Medtronic continues to receive positive feedback on the system highlighting that patients are “getting to stay in Auto Mode a lot longer” leading to better glycemic control. Additionally, in “early reports,” Mr. Salmon claimed many real-world users reaching “kind of 90s” Time in Range with MiniMed 780G. For reference, mean Time in Range in the MiniMed 780G pivotal study reached ~75%, though the earliest adopters of diabetes technologies usually have much better glycemic control than the general population. Mr. Salmon also touched on the reduced number of calibrations needed to keep the 780G system in Auto Mode (about “half” as many calibrations as MiniMed 670G); of course, this is still a disadvantage compared to Tandem’s Control-IQ, which does not require CGM calibration. According to Mr. Salmon, the Net Promoter Score for MiniMed 780G is “up about ten-fold” compared to 670G. According to dQ&A data, the NPS for MiniMed 670G was about +7, suggesting an NPS of +70 for MiniMed 780G. This would put the NPS for MiniMed 780G right between those for Abbott’s FreeStyle Libre (+67) and Dexcom’s G6 (+83) – an incredibly high score compared to the 670G, for which Medtronic receives great kudos for having brought to the field – the first “real” closed loop.

2. Synergy and Zeus CGM data to “hopefully” be presented at ADA 2021; Synergy pivotal completed with FDA submission to come in “summer”

Medtronic continues to make progress with its CGM pipeline, which the company recognized in the past and on today’s call as the weakest link in its AID systems. According to Mr. Martha, Medtronic is aiming to share accuracy data from both Synergy and Zeus CGMs at ADA 2021, which is currently slated for June: “With regard to Synergy data, we will be filing an abstract with that, as well the Zeus data hopefully for an ADA presentation. So, you’ll see the data when it becomes available in that abstract gets accepted.” 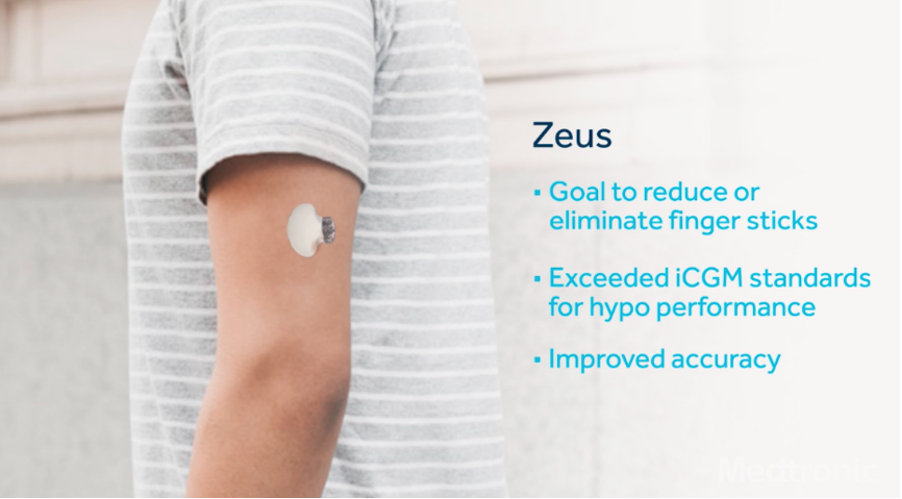 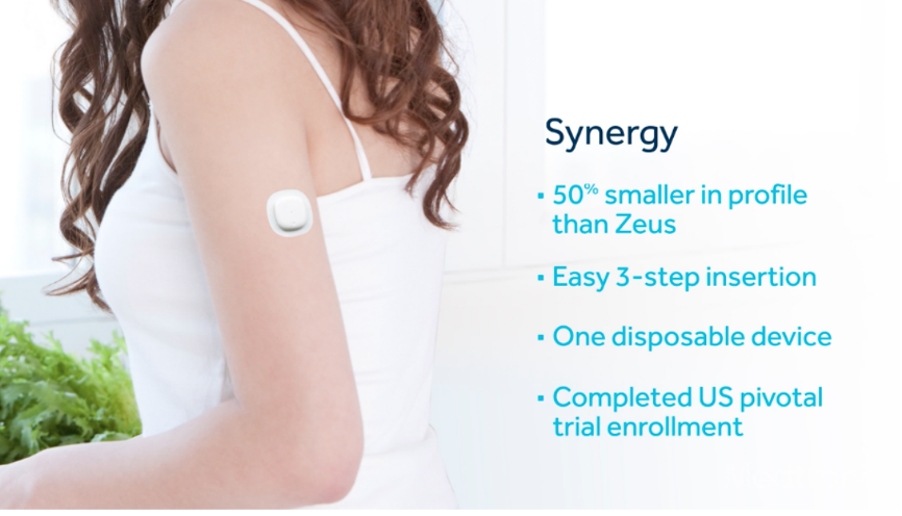 Q (David Lewis, Morgan Stanley): Sean, the Diabetes business obviously was the standout versus the Street models here this quarter. I just wonder if you can talk about what you're seeing in 780G relative to what we had seen historically with 670G. The guidance for next quarter probably doesn't seem as strong as I would expect given the momentum in Diabetes this quarter. So is there anything to think about there? And then just any sense of kind of Zeus versus Synergy in terms of relative timeline? Does it make sense to launch those products independently if they're going to be sort of right on top of each other from a filing strategy? So just a general Diabetes update would be very helpful. Thanks so much.

Sean Salmon: Thanks, David. So, I would say with 780G what people are really enjoying about that is getting to stay in Auto Mode a lot longer. That leads to better control. With the early  reports, people are in the kind of 90s in the post market realm for glycemic control. But ,more importantly, they're not getting interrupted to take blood sugars. That's cut down in half. They're able to sleep through the night with really good blood sugar control. And we measure things like net promoter score on a product level as well, and it's up about ten-fold from what we saw from the experience of the 670G. So, a very, very big improvement. And we're also seeing on the 670G I think the transmitter which connects the CGM to the pump seems to function better than the way we used to connect that on 670G, so it's more reliable. And that coupled with being able to see your numbers on the phone has led to a better experience as well. And, of course, that pipeline is upgradeable to not just the 780G but also the new sensor pipeline you asked about and the extended wear infusion set.

With regard to the Synergy, we've already filed Zeus. That was filed in November. Synergy will be filed upon the completion of the manufacturing validation in the summertime. So they will be separated by probably enough to make a difference from where we're going to want to have both products in the market but we'll sort that out. We don't need to launch it if we don't need to launch it but I think we'll have a period of time where Zeus will precede Synergy for both pump integration as well as stand-alone use.

Q (Vijay Kumar, Evercore): I guess you look at the timelines here on 780. That's subject to the FDA. But based on, I guess, how the 780 launch has gone in Europe, do you now feel more confident of getting back to market growth just with 780? And I'm curious on Synergy. You said the trial is complete. Have you seen the data? Do you think the product can get iCGM approval?

Sean Salmon: Hi, Vijay. So, 780, yes. The device is very competitive and we'll do well with it when we get into the marketplace. But the sensor experience continue to be what we need to improve and of course we have the pipeline working through that. With regard to Synergy data, we will be filing an abstract with that as well as the Zeus data hopefully for an ADA presentation. So, you'll see the data when it becomes available if that abstract gets accepted.