Today, Medtronic Diabetes formally announced one-year topline results from its value-based “preferred” agreement with UnitedHealthcare. This follows more specific mentions a month ago at its 2018 Analyst Meeting and two weeks ago at an ADA analyst briefing.

In over 6,000 members with diabetes on the MiniMed 630G and previous generation insulin pumps, Medtronic/UHC observed 27% fewer preventable hospital admissions vs. plan participants who were on MDI. This occurred over one year (July 2016-June 2017). The press release does not mention Medtronic’s rise in pump market share amongst UHC members (70% -> 92%), nor the accompanying “up to 14% reduction in total medical costs” – both stats were shared in the analyst slide decks (see picture below from ADA). The announcement does not include the baseline number of events in each group (i.e., what was the absolute reduction in events?) nor the demographics/baseline characteristics in each group.

That said, these data could be an underestimate of future cost savings: none of these >6,000 members were on the MiniMed 670G hybrid closed loop, and the group includes a mix of pumpers on CGM and not on CGM. We assume outcomes for severe hypoglycemia ER visits/hospitalizations would be even stronger on 670G, though we’ll have to wait for future analyses as part of the “multiyear” agreement.

This “preferred” pump partnership with UnitedHealthcare was first announced in May 2016 and took effect on July 1, 2016. The deal economics aren’t shared, though the analyst briefing said Medtronic’s revenue and profitability have both gone up, and UHC has clearly saved money too.

Tandem was hard hit by this preferred deal in 2016, while Insulet persevered and secured direct in-network coverage for Omnipod with UHC as of three months ago. Dexcom has its own work ongoing with UHC on using CGM+coaching in type 2 diabetes; the 10,000-person pilot had enrolled 1,000 patients as of 1Q18, with more updates expected by the end of 2018/early 2019.

Overall, these encouraging outcomes reflect a bigger Medtronic Diabetes push on the payer front, quickly following the new MiniMed 670G performance guarantee announced two weeks ago: if there is a diabetes-related hospitalization or ER visit for a patient on the 670G, Medtronic will reimburse it up to a cap of $25,000 over a four-year period. Assuming payers go for this attractive deal (what do they have to lose?), Medtronic will also be highly incentivized to keep patients out of the hospital, possibly putting more emphasis on strong upfront training, remote monitoring (not yet available in 670G), and potentially coaching and other outreach. Will we see more preferred arrangements like the UHC/Medtronic deal? Could this form a competitive moat that other companies will have to match? 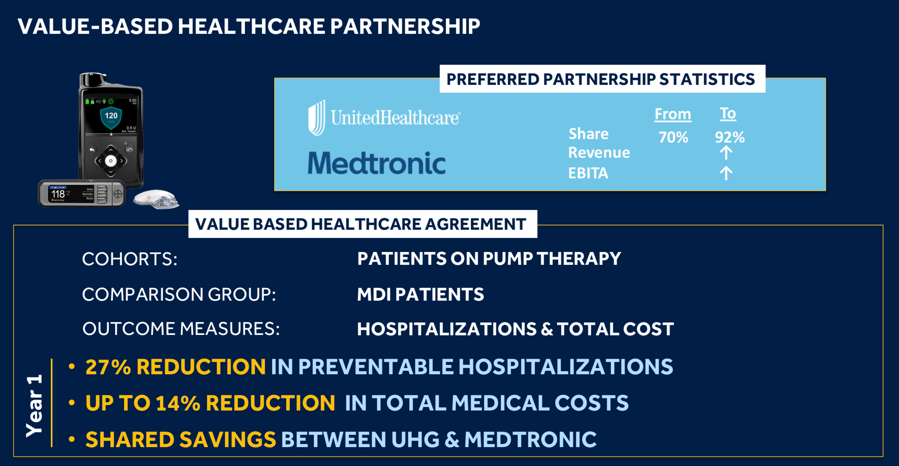