1. Global Diabetes Care revenue totaled $263 million in F3Q17, rising 2% as reported and 3% operationally year-over-year (YOY). This performance came on a very difficult YOY comparison to 7% operational growth one year ago, and now marks an incredible 32 consecutive quarters of operational growth.

2. US Diabetes Care sales totaled $132 million in F3Q17, rising 4% YOY against a difficult comparison to F3Q16, when sales climbed 7% YOY. Sequentially, US revenue rose 7% from a slightly weaker F2Q17.

4. Medical Segment President Mr. Thomas Polen mentioned in Q&A that the MiniMed Pro infusion set with FlowSmart technology is now slated for a FY18 launch (October 2017-September 2018). In the meantime, BD is in the process of running a clinical trial to ensure that the training provided in the set’s packaging is optimized for user experience. This is a very wide window and we look forward to greater clarity from BD and Medtronic on this.

5. There was no mention of the disposable type 2 patch pump, slated for a 2H18 launch as of F2Q17. We had hoped to receive an update on the progress of a clinical trial for the pump, originally scheduled to begin this summer. There was also no comment on the smart pen needle project, which was also expected to launch in 2H18, per JPM. Competition for both devices is heating up.

6. BD did not provide updates on an infusion set user preference and claims study and a lipohypertrophy study (both completed, but no results posted).

Global Diabetes Care sales grew 2% as reported and 3% operationally YOY to $263 million on a difficult comparison (up 7% operationally a year ago). This now marks an incredible 32 consecutive quarters (eight full years!) of operational growth. F2Q17 sales were hurt by earlier-than-expected customer orders in F1Q17 (just barely breaking into positive YOY growth), but as Mr. Forlenza forecasted in F2Q17, growth is back on track. The press release notes that the solid performance in Diabetes Care was a driver of growth in the Medical segment. Sales climbed a strong 8% sequentially. 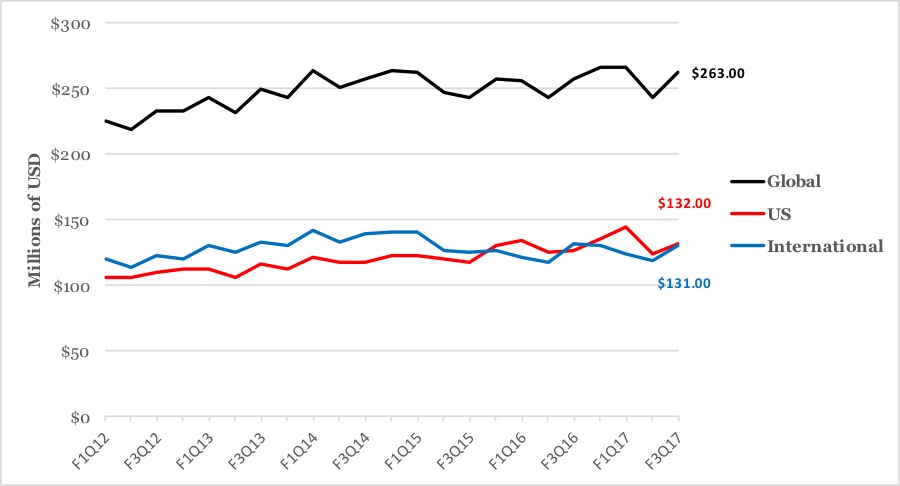 US Diabetes Care quarterly revenue totaled $132 million, climbing 4% YOY on a difficult comparison to F3Q16’s 7% growth. Sequentially, sales were up 7% from F2Q16, when the US business saw its first YOY decline in a near-six-year long stretch. We assume stateside growth was driven by pen needles and syringes per usual, but no official comments were provided. These products have served and will continue to serve the company well – injectables aren’t going anywhere soon – but we wonder how BD’s business model might need to evolve, particularly in a future value-based climate and if pumps see significant expansion. As announced in November, the type 2 patch pump, smart pen needle technology, and greater push into digital (~500 programmers in the Medical segment alone) should hopefully accelerate the business’ growth?

Relative to an international revenue of $132 million in F3Q16, sales remained fairly flat this quarter, falling 1% as reported and growing 1% operationally YOY to $131 million. This performance comes against an easy comparison of 6% YOY operational growth in F3Q16. CFO Mr. Christopher Reidy mentioned that Diabetes Care revenue reflects strength in emerging markets, partially offset by softness in Europe. He specifically pointed to pressure in the UK due to the impacts of austerity measures and government payers, which he expects to continue. Sequentially, sales grew 10% from a tough F2Q17, the first positive sequential growth following three straight quarter-to-quarter declines. This quarter is the sixth consecutive of low-to-mid single digit growth.

During Q&A, Medical Segment President Mr. Thomas Polen shared that a launch of the Medtronic/BD MiniMed Pro-set with FlowSmart will resume in FY18 (a broad window of October 2017-September 2018). In the meantime, a clinical trial to optimize the training materials provided in the set’s packaging is underway and “going exactly as planned.” Medtronic initiated a limited launch in September 2016, but plans for a full launch in January-March 2017 (guidance from BD’s November Analyst Meeting) were foiled due to a higher-than-anticipated rate of complaints associated with kinked cannulas and elevated blood glucose levels (see our coverage of the notification). Adam used the set early in the limited launch (see his test drive here) and had a mostly-positive experience, though did notice some issues with cannula kinking/bending and some needed improvements to the instructions. This saga underlines the importance of performing in-depth of human factors and training studies before launch, and then proceeding with a limited launch to gather real-world feedback.

There was no mention of the disposable type 2 patch pump, nor the smart pen needle technology, both slated for 2H18 launches (pump update as of F2Q17; pen needle update as of JPM). We had hoped to receive an update on the progress of a clinical trial for the pump – which Mr. Polen introduced at JPM, suggesting it would begin this summer – but it was not mentioned, and we cannot find anything on Clinicaltrials.gov.

BD did not provide updates on an infusion set user preference and claims study nor a lipohypertrophy study, both of which are marked as completed on CT.gov, but with no results posted. The user preference study (n=75) was last verified in April and investigated whether insulin pump users preferred the BD MiniMed Pro set over their current set with primary outcomes of insertion pain and wear comfort. We expect positive outcomes from this randomized, crossover study, given our own experience inserting the set. We’d of course love to see a study demonstrating superior glycemic control via the dual-ported cannula, although we recognize this is near impossible to measure with an A1c endpoint. Perhaps CGM data could be utilized to show a benefit here, especially on days one and three of wear. The lipohypertrophy study (n=50) was last verified in January, evaluating the effect of optimized injection technique on glycemic control, consumption of insulin, hypoglycemic rates, healthcare costs, and the use of health services in patients with diabetes who have clinical lipohypertrophy. Lipohypertrophy doesn’t receive the attention it deserves, and we’ll look forward to reading the results once they are provided.

Q: Do you have a read on whether you see any bounce back in the fourth quarter?

Mr. Christopher Reidy (CFO): We see Diabetes Care rebounding, primarily driven by the US, as we do think that the UK pressure will continue.

Q: What is the status of the diabetes infusion set rollout?

Mr. Thomas Polen (President, Medical segment): On the infusion set, as I think we had shared in the past, we've gotten some complaints during the initial launch. We were in the process of running a clinical trial to confirm that some of the new training tools that we've included in the packaging optimized the patient's ability to start using this set. That clinical trial is going exactly as planned and our guidance assumes we resume the launch in FY 2018.