Tandem reported 3Q17 results this afternoon in a call led by CEO Kim Blickenstaff. In one of its most eventful (and arguably highest pressure) quarters ever, the company delivered encouraging results on multiple fronts – 15% YOY sales growth, launch of the long-awaited t:slim X2/G5 integration, a successful rollout of t:lock, enrollment starting in its PLGS pivotal trial, and Animas’ exit driving “overwhelming” call volume – all should help drive a big Q4.

To our surprise, full-year revenue guidance was reduced, and cash still remains a near-term concern – Tandem has enough resources for a couple quarters, with some upside from recent warrants. There are plans to raise more money in 2018.

On the competitive front, the 670G feels like less of a threat than a year ago (even if it were widely available, which it is not), and we expect Animas’ exit to drive additional t:slim X2 shipments, particularly due to the decision not to offer all Animas users the 670G  (or Guardian 3 sensor, at least near-term). We expect strong 4Q17 growth and sales, assuming Tandem can compete effectively with both Medtronic and Insulet in the year’s final months.

Tandem’s sales (non-GAAP) rebounded in 3Q17, rising 15% year-over-year (YOY) to $23.7 million. Sales grew a strong 11% sequentially from 2Q17, the strongest Q2-to-Q3 gain Tandem has seen since 2014. This represented Tandem’s third highest sales ever, and the 15% growth broke a string of three straight quarters with YOY declines. That said, this was the easiest YOY comparison Tandem has had in 2017, as t:slim sales started to slow one year ago in 3Q16 (32% growth) following the 670G approval noise. Still, we interpret this as a strong quarter, since Tandem actually did not have much tailwind from the t:slim X2/G5 approval in late August – management said it typically takes at least 30 days to verify insurance and ship, meaning a lot of the upside from t:slim X2/G5 shipments will come in Q4 (more on this below). From a sales perspective, the business continues to hold steady in the face of a dynamic and competitive environment, though Tandem will need another big Q4 to instill confidence and pave the way for fundraising in 2018. (As a reminder, Tandem’s non-GAAP sales exclude the impact of the new technology upgrade program, which gives a better sense of the underlying business.) 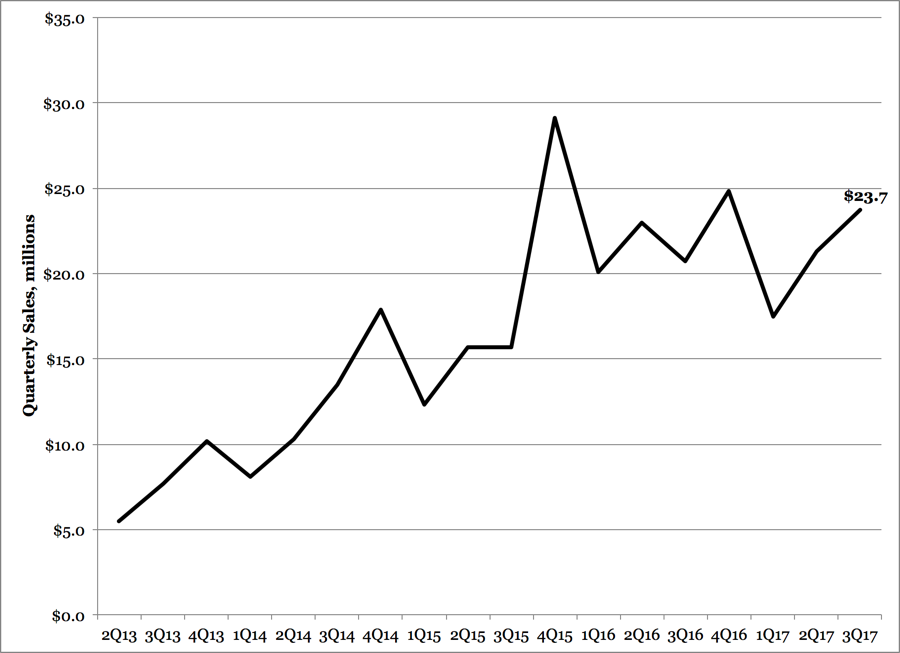 Pump shipments of 3,868 declined 0.7% YOY in 3Q17, but rose 13% sequentially from 2Q17. The user base is now over ~60,000 customers, though this milestone was not specifically mentioned today. There was also no mention of the percentage of patients coming from MDI – recently it has been ~60% – which could mean that more pumps in 3Q17 were shipped to current pumpers (i.e., more of a 50%/50% split). This would align with the t:slim X2/G5 approval, as we assume many early adopters on pumps were waiting for that approval. 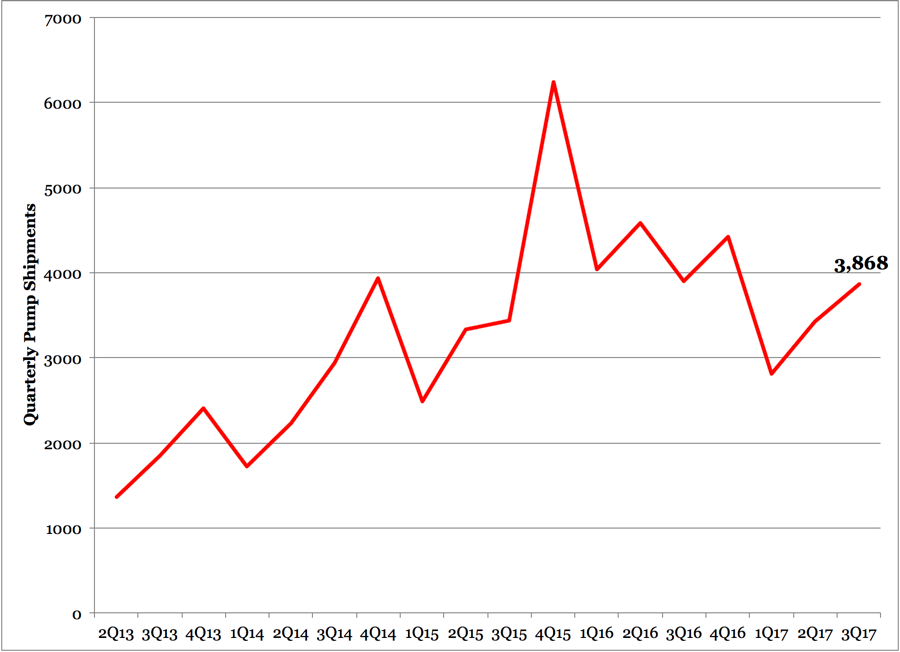 Tandem has $23 million in cash on hand, reflecting net cash use of $19 million in 3Q17. Combined with an October raise (~$15 million in net proceeds), Tandem’s runway will extend into 2018 (quarter not specified). Tandem plans to raise additional capital in 2018 – we assume this might happen early in the year, as current resources will last ~two quarters at the current burn rate. On the plus side, October’s raise also included two series of warrants, which would provide Tandem up to an additional $16 million each, assuming they are exercised before their expiration dates (April 2018 and October 2023). The nearer-term warrants expiring in April would be a nice win for Tandem near-term. Tandem did have a couple adverse cash factors in 3Q17 – building t:lock inventory, new pumps shipped late in Q3 where cash has not been collected – implying (to us) that burn should improve in 4Q17. Of course, higher sales will also help in Q4. The call was vague on potential fundraising vehicles, only saying “different financing alternatives” are being explored and a “stair step approach may be pursued.” A big Q4 will go a long way towards instilling investor confidence.

Immediately following FDA approval, the t:slim X2 with Dexcom G5 integration launched in late August – both to new customers and as a free remote software update to existing t:slim X2 users. The response has been “fantastic” and “overwhelmingly positive.” Within the first month, one-third of t:slim X2 users updated their pumps software at home (via the Tandem Device Updater) to add G5 integration – an exciting new paradigm for rolling out pump innovations. Of those who updated, 85% said they were “satisfied” or “extremely satisfied,” which does not surprise us – the demo we saw at ADA revealed a very strong user experience. Notably, most upgrades happened just 2.5 weeks post announcement, remarkably fast. In Q&A, management said the upgrade rate was in line with expectations – Tandem estimates that roughly ~30-35% of its pump users are on CGM. (“We never thought it would be 50%” upgrading.)

Following Animas’ decision to exit the insulin pump market (three weeks ago), Tandem’s sales pipeline trajectory has “increased dramatically” relative to earlier in the year. The call center has seen a “pretty overwhelming” number of inquiries – this should be a positive for 4Q17 results, assuming many of these leads turn into actual shipments. As a reminder, Tandem announced earlier this week an expanded welcome program – Animas users with ~two years left on their pump warranties can get on the t:slim X2 for a fully refundable deposit of $999 (i.e., a free upgrade, assuming they stay on t:slim X2). Insulet’s program is slightly more generous in terms of upfront cash, as it offers a free switch to the Omnipod AND 10 free pods. However, Tandem’s program extends to March 31, 2018, while Insulet’s program expires two months earlier. Both companies have partnered with Dexcom to offer a $200 cash gift card (from Dexcom) for those completing a “patient survey” and upgrading to G5 (i.e., new to CGM or currently on G4). We’ll have to see how Tandem and Insulet both do in 4Q17; we’ll hear Insulet’s take on the competitive landscape in next week’s call.

7. t:lock Launches as Expected, Helping Increase Set Revenue from $5M to $13M Year-to-Date; Sets Bought Direct from Tandem Up to 66%

As expected, Tandem began shipping t:lock in 3Q17, its new custom infusion set connector. Impressively, it’s already helping drive gains in revenue: year-to-date sales of infusion sets are ~$13 million, nearly tripling the ~$5 million at this point in 2016. There’s also been a “substantial” increase in the percentage of sets purchased directly from Tandem, up to 66% in 3Q17 – this is a bump from 61% in 2Q17, more than doubles the 27% one year ago (3Q16), and more than triples the 18% two year ago (2015). Management said it is “pleased with the progress,” and the percentage is expected rise to nearly 100% by year-end – patients with Luer Lock supplies will need time to use them up and switch over to t:lock.

In line with 2Q17’s announcement, Tandem is on track to file for CE Mark by the end of 2017, enabling international sales to commence in 2018 in “select geographies.” Canada is the #1 priority, a strategic move given the Animas exit. (We’re not sure how many Animas users are in Canada, but assume it is a meaningful number.) Health Canada filing timing was not shared, though it sounds like there is a lot of work to be done – French translation was specifically mentioned. More timing is expected by the next call.

Launch of Tandem’s predictive low glucose suspend (PLGS) device with Dexcom G5 integration is still expected in summer 2018 (in line with the 2Q17 update). The pivotal trial (PROLOG) began enrolling in August and is on track to complete by the “end of the year.” ClinicalTrials.gov specifically says “November,” though “end of year” was used today – we’re not sure if that means things are ramping up slower than expected, or if management was being less specific.

Launch timing has been delayed on the treat-to-target AID device with TypeZero – launch is now expected in the first half of 2019, back ~6 months from the previous “end of 2018” expectation. This is not too surprising, as the NIH-funded international diabetes closed loop (IDCL) study has been extremely slow to get off the ground – the three-month pivotal for Tandem/Dexcom/TypeZero is now expected to start in 1H18. As a reminder, it was nearly one year ago that Tandem shared IDCL would serve as its pivotal – at the time, an FDA submission was expected by the end of 2017! Clearly, it has taken longer than expected to get all the hardware and software and trial sites ramped up. The trial will use Tandem’s t:slim X2 pump, Dexcom’s G6 sensor, and the TypeZero treat-to-range algorithm built into the pump. It is obviously a major plus that this trial is NIH-funded, and Tandem may still be second-to-market in the US with a hybrid closed loop – Insulet expects a launch in 2019 (pivotal in 2018), Bigfoot expects a 2020 launch (pivotal in 2018), and Beta Bionics expects an insulin-only launch in the first half of 2020 (pivotal in 1H19). We would not be surprised to see some timeline estimates shift.