Stay tuned for a second installment of highlights coming your way soon, including CARMELINA and CAMELLIA late breakers, a look at the future of SGLT-2s and heart failure, exhibit hall coverage, and more.

Dr. Stephen Wiviott presented full results from the DECLARE CVOT to a standing-room-only crowd: AZ’s SGLT-2 inhibitor Farxiga (dapagliflozin) reduced risk for the co-primary endpoint of hospitalization for heart failure/CV death by 17% vs. placebo (HR=0.83, 95% CI: 0.73-0.95, p=0.005 for superiority), making it the first SGLT-2 to show significant benefit on heart failure. Dapagliflozin was non-inferior to placebo on three-point MACE (the other co-primary endpoint), though results trended in favor of the SGLT-2 inhibitor (HR=0.93, 95% CI: 0.84-1.03, p<0.001 for non-inferiority, p=0.17 for superiority). DECLARE is unlike any other SGLT-2 CVOT to date and carries significant implications for the class and for patients. Most pertinently, DECLARE solidifies the heart failure benefit of dapagliflozin specifically and SGLT-2 inhibitors broadly – if there was any question before – by including HHF in a primary endpoint (heart failure was only assessed as a secondary endpoint in Lilly/BI’s EMPA-REG and J&J’s CANVAS). In an interview with our team, AZ management underscored heart failure as the most prevalent and important CV endpoint for patients with type 2 diabetes. Indeed, patients with type 2 are at a 2.5-times greater risk of developing heart failure compared to a background population, and heart failure is just as costly to the healthcare system as cancer, according to AZ CEO Mr. Pascal Soriot.

DECLARE’s large (~60%) primary prevention cohort also makes the CVOT unique, and piques our curiosity about the potential for a CV indication that applies to the entire type 2 diabetes population rather than only to those patients with established CVD. Importantly, HHF/CV death was significantly reduced in both primary (HR=0.83, 95% CI: 0.71-0.98) and secondary prevention participants (HR=0.84, 95% CI=0.67-1.04). This consistency across primary and secondary prevention cohorts should support a new indication for reducing risk of heart failure (and possibly CV death) in a much broader population than ever before. To this end, AZ management reiterated to us that they plan to submit the data to regulatory agencies as soon as possible, likely in 1H19. Our biggest question, perhaps, is whether FDA will grant a dual HHF/CV death indication because this was the primary endpoint, or an indication for HHF only, the outcome which drove superiority. An indication solely for heart failure would parallel Jardiance’s indication solely for CV death, which drove overall MACE results in EMPA-REG. For context, AZ management explained that the decision to pair CV death with HHF in the study design was based (very rationally in our opinion) on the compelling results from the EMPA-REG trial indicating Jardiance’s reduction of CV death. AZ hypothesized that heart failure may be the driver of CV death improvements (as opposed to atherosclerotic events like stroke or MI), making HHF and CV death a natural primary endpoint pairing.

On a similar note, AZ emphasized to us that because the results of the trial are much more generalizable, it should give PCPs and HCPs greater confidence in prescribing Farxiga: They won’t have to spend as much time thinking about how to determine which patients may benefit from Farxiga, given the broad population studied. AZ management acknowledged the immense educational opportunity ahead of them with prescribers, both with respect to raising awareness of heart failure as the most prevalent CV complication of diabetes, as well as the general benefit of Farxiga for a wide variety of patients. Looking forward, the Dapa-HF (n=4,500 with established heart failure with reduced ejection fraction; results expected 2020) and DELIVER (n=4,700 with established heart failure with preserved ejection fraction; results expected 2020+) trials have the potential to extend Farxiga’s now-known benefit on heart failure to even more patients, namely those with established heart failure and without type 2 diabetes.

Simultaneous to Dr. Wiviott’s presentation, results from DECLARE were published in NEJM: “Dapagliflozin and Cardiovascular Outcomes in Type 2 Diabetes.” Key findings are summarized as follows:

As a reminder, DECLARE is the longest (median 4.2 years follow-up) and largest (n=17,160) SGLT-2 CVOT to date. The primary prevention cohort (multiple CV risk factors but no established CV disease at baseline) alone (n=10,189) is bigger than the total enrolled populations of both EMPA-REG OUTCOME (n=7,020, <1% primary prevention) and CANVAS (n=10,142, 34% primary prevention). We hope that annual follow-up on these patients, even at a basic level, will be possible. A few other points for consideration include:

Comparison of Relevant Results from CANVAS (for Invokana) vs. EMPA-REG OUTCOME (for Jardiance)

This chart is for illustrative purposes only, as differences in enrolled population and trial design make it inherently impossible to draw comparisons between molecules. We continue to believe that a large outcomes trial examining SGLT-2 inhibitors and GLP-1 agonists in comparison to each other would be immensely valuable to patients, clinicians, and payers.

In his discussant following the DECLARE presentation, Dr. Javed Butler asserted that SGLT-2 inhibitors should be used in type 2 diabetes patients to reduce heart failure risk, irrespective of their effect on the classic three-point MACE. Supporting this claim was compelling data from a recent Swedish cohort study: Controlling A1c, smoking, LDL, blood pressure, and albuminuria attenuated risk for MI (HR=0.84, 95% CI: 0.75-0.93) and, non-significantly, stroke (HR=0.95, 95% CI: 0.84-1.07) relative to matched controls without diabetes. However, the hazard ratio for heart failure hospitalizations remained elevated (HR=1.45, 95% CI: 1.34-1.57) even after managing these other risk factors, suggesting that type 2 diabetes confers heart failure risk independent of A1c, smoking, LDL, blood pressure, and albuminuria. Moreover, once patients with type 2 diabetes develop heart failure, their mortality risk skyrockets and fewer than 10% survive five years, compared to ~80% of those with type 2 diabetes without heart failure. With this in mind, Dr. Butler stated that any therapy indicated for improving heart failure outcomes (as dapagliflozin likely will be, based on DECLARE results) should be a welcome addition to the diabetes care armamentarium. We couldn’t agree more, and we hope that as medications prove their efficacy on heart failure, they will be better utilized in diabetes care alongside lifestyle modification.

3. Lilly/BI’s Real-World EMPRISE Study Confirms Benefit on Hospitalization for Heart Failure with Jardiance, SGLT-2 Class in US Cohort; Balanced Across Both Primary and Secondary Prevention

Following the release of topline results ~one week ago, Lilly/BI presented a jam-packed poster on the EMPRISE study, examining the real-world impact of Jardiance on heart failure hospitalizations. Importantly, two definitions of hospitalization for heart failure were used: HHF-specific refers to a primary HF discharge diagnosis, while HHF-broad refers to a HF discharge diagnosis in any position. Among people with type 2 diabetes starting Jardiance (n=17,539) or a DPP-4 inhibitor (n=17,539), those receiving Jardiance saw a 53% relative risk reduction (HR=0.47, 95% CI: 0.26-0.85) for HHF-specific over a brief mean follow-up of 5.4 months. HHF-broad was reduced by 44% (HR=0.56, 95% CI: 0.43-0.73) with Jardiance vs. DPP-4s. The 44% risk reduction was reported by Lilly/BI is the recent press release on EMPRISE. Very notably, these results were consistent between patients with (n=4,217) and without (n=13,243) established CVD at baseline, inasmuch as the confidence intervals overlapped; the HHF-broad risk reduction was 47% (HR=0.53, 95% CI: 0.39-0.72) among those with a history of CVD, compared to 65% among those without prior CVD (HR=0.35, 95% CI: 0.20-0.61). We would expect risk reduction to be greater in secondary prevention patients vs. their primary prevention counterparts, though in this case, we attribute the discrepancy to short follow-up time and the fact that this was an observational study. There was very little difference based on 10 mg vs. 25 mg dose of Jardiance, which gave 47% vs. 54% risk reductions, respectively. The specific event rate (IR/1,000 person-years) was 5.4 in the DPP-4 group vs. 2.1 in the Jardiance group (broad rates were 19.9 vs. 10.5, respectively). See the full table of results below.

After weeks of buildup following a splashy release of positive topline results, the full presentation of REDUCE-IT CVOT (n=8,175) results did not disappoint, demonstrating highly significant results for Vascepa (4 g/day icosapent ethyl) vs. placebo on both primary and key secondary endpoints. Following the presentation, full results were also published in NEJM: “Cardiovascular Risk Reduction with Icosapent Ethyl for Hypertriglyceridemia.” Dr. Deepak Bhatt (Brigham and Women’s Hospital) took the stage to present these full results in front of a packed-beyond-capacity room. As a reminder, the study’s primary prevention cohort was comprised entirely people with type 2 diabetes over age 50 with ≥1 CV risk factor, so these results are highly relevant to people with diabetes, and somewhat lower CV risk at that; overall, ~58% of participants had type 2 diabetes. The secondary prevention cohort included those over age 45 with established CVD and comprised ~70% of the study population. Read on below for key takeaways on Vascepa’s impressive benefits on primary and secondary endpoints, effects on primary and secondary prevention cohorts, safety data, and a brewing controversy surrounding the use of mineral oil in REDUCE-IT’s placebo arm, which may have contributed to a higher rate of CV events: 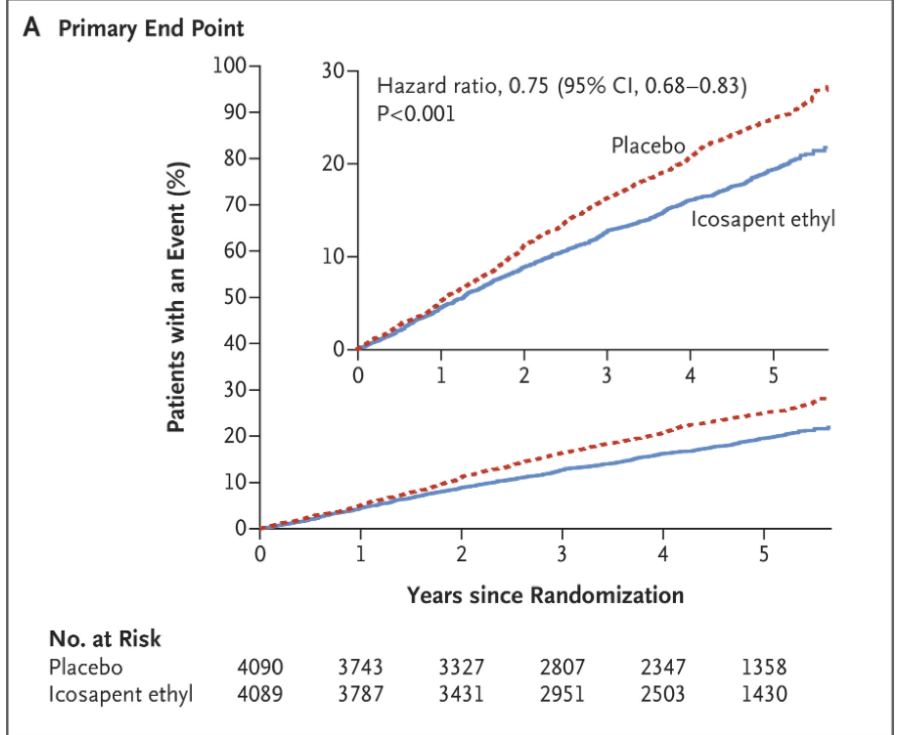 5. Drs. Will Cefalu and Eduardo Sanchez Kick Off ADA/AHA’s “Know Diabetes by Heart” Initiative; Why and How the Partnership Plans to Reduce MACE + HF Events in Diabetes; Abstracts Discuss Role of Stress, Mental Health, Eating Schedules in CVD/Type 2 Link

ADA’s Chief Scientific, Medical, and Mission Officer Dr. Will Cefalu and AHA’s Chief Medical Officer for Prevention Dr. Eduardo Sanchez officially launched AHA/ADA’s multi-year partnership, “Know Diabetes by Heart,” offering details on the what, why, and how of the initiative during two events on Saturday. The partnership’s dedicated website already has a plethora of resources and educational materials devoted to the critical link between diabetes and CV disease. The initiative is funded by Novo Nordisk, Lilly/BI, and Sanofi.

In his second Saturday late-breaker, Dr. Deepak Bhatt presented results from the ODYSSEY Outcomes Economics Study of Sanofi/Regeneron’s PCSK9 inhibitor Praluent (alirocumab), demonstrating greater cost-effectiveness for the agent when used in those with baseline LDL-C >100 mg/dl. In the overall intention-to-treat population from Odyssey Outcomes, the maximum annual price of alirocumab to achieve cost-effectiveness at $100,000 per QALY (quality-adjusted life year) would be $6,319. However, that number climbed to $13,357 when considering those with baseline LDL-C ≥100 mg/dl and plummeted to $2,083 when considering those with baseline LDL-C <100 mg/dl – indicating that Praluent use is most cost effective in patients with higher baseline LDL-C. In other words, “The higher the baseline LDL-C, the higher the value of alirocumab…” These data led Dr. Bhatt to conclude that, considering the absolute clinical benefit and cost-effectiveness analyses, Praluent might offer good value in patients with recent ACS and baseline LDL-C of at least 100 mg/dl. This is the most robust cost-effectiveness analysis we’ve seen on PCSK9s to date, and it offers significant insight on which patients stand to benefit most efficiently from the class. Our sense has very much been that, despite strong thought leader enthusiasm for the LDL-lowering benefits of the two-member class, clinical enthusiasm and uptake have been hampered by cost barriers and utilization management procedures. Moreover, we’ve observed that the field simply isn’t sure which patients should receive PCSK9s, and physicians are wary of prescribing such costly agents to the “wrong” patients. To this end, we’re interested to see what more can be done to characterize patients who garnered the most benefit from Praluent in ODYSSEY Outcomes and also in FOURIER for Amgen’s Repatha. 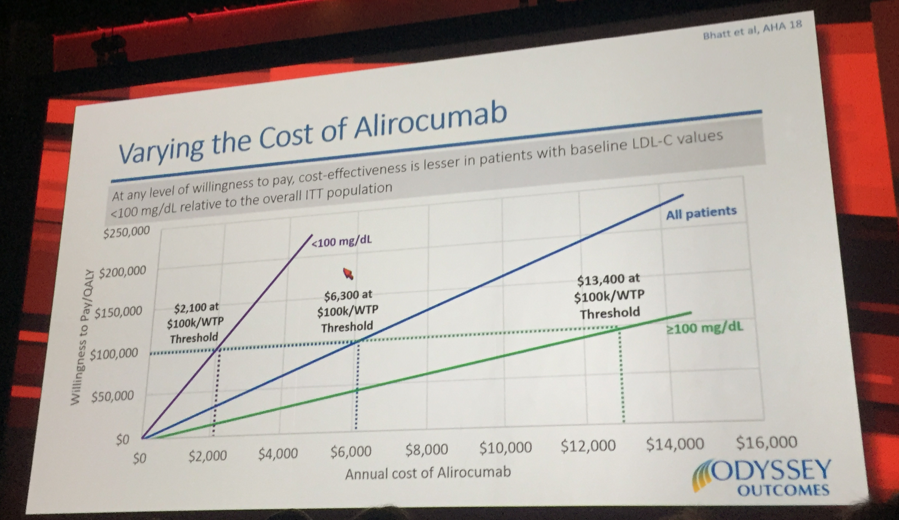