1. Virta’s launch was timed with 10-week results from its first study published in JMIR Diabetes. The program produced a mean 1% reduction in A1c (baseline 7.6%) in 262 people with type 2 diabetes in a non-randomized trial. 56% of those with type 2 diabetes at baseline went into remission (A1c <6.5%), and 97% of that group did so without an increase in the number or dosage of medication. Average body weight loss was a strong 7%. An impressive 87% of those using insulin either decreased their dose or eliminated their use of insulin altogether. Study retention was strong at 91%, and the patient testimonials are encouraging. In preliminary six-month data on the company’s website, average weight loss has increased to 12%.

2. Virta is currently available to people with type 2 diabetes and prediabetes as a covered benefit through some self-insured employers/health plans (none specified), and to individuals able to pay out of pocket. The cash-pay cost is roughly $400 per month for the first year – quite pricey for the average person– though presumably some of this would be offset by medication reductions. Patients can apply directly to receive a free consultation. Physicians can also refer patients directly to Virta. In these early days, we assume payer coverage is limited, but will expand with these early outcomes and further commitment to publishing data.

3. Virta Health was co-founded by Sami Inkinen (CEO; former President of Trulia) and two very well known ketogenic diet and metabolism researchers: UC Davis’ Dr. Stephen Phinney (Chief Medical Officer) and Ohio State University’s Dr. Jeff Volek (Chief Science Officer). Highly regarded Dr. Peter Attia is also on Virta’s healthcare industry advisory board and shared an enthusiastic post on these results: “Is Type 2 Diabetes Reversible at Scale?” His best quote: “Clearly we need to look at the long-term success, and see many more patients succeed safely, but this is more promising than anything I have ever seen.”

5. Virta’s highly ambitious goal is to reverse type 2 diabetes in 100 million people by 2025. This would be moonshot-level impressive and require achieving some enormous scale in the next eight years. Since only half of those with diabetes globally are diagnosed (~200 million), this means Virta must reach roughly 50% of the entire global diagnosed population – a tall order. Obviously, even treating hundreds of thousands or millions of patients with Virta’s model rests on longer-term and sustained outcomes; scalable technology and coaching efficiency; and an attractive cost-saving business model for payers, health systems, and countries.

6. A promising aspect of Virta’s program is the potential for cost savings. Unlike therapeutic approaches of comparable efficacy, Virta involves no additional medication in the vast majority of patients. Given the high price of newer diabetes drugs, especially insulin, perhaps the program can pay for itself short-term.

7. The extremely low-carb (<30 g/day), high-fat ketogenic diet at the cornerstone of Virta’s program stands in contrast to the ADA’s historic dietary approach, where the recommended diet is usually moderate in carbs (~40% of total calories) and low in fat. The ADA has somewhat relaxed its stance on dietary fat in recent years (“individualized” approach, per its 2014 recommendations), but the organization has not been a staunch advocate for low-carb, high-fat approaches in the past– despite their proven value for improving glycemia, insulin dosing safety, weight, diabetes hassle, and more (read Adam’s diaTribe columns here, see Virta’s citations here, and a 2015 review article here). We can’t wait to see longer-term data.

Virta Health’s debut comes on the heels of publication of its first major study (JMIR Diabetes), offering evidence that nutritional ketosis coupled with on-site or remote education/coaching produces a trifecta of benefits: A1c improvements (-1% from a 7.6% baseline), 7% body weight loss, and substantial reductions in diabetes medications (especially in insulin, SU, SGLT-2, and TZD users). The non-randomized study involved 262 people with type 2 diabetes (mean BMI of 41 kg/m2 and mean age of 54 years) medicated with at least one anti-hyperglycemic drug (30% on insulin). Ten weeks of Virta’s program reduced mean A1c across all participants by 1% (p<0.001), bringing 56% of those with type 2 diabetes at baseline into remission with an A1c <6.5%. Of the individuals who achieved diabetes remission, 97% did so without an increase in the number or dosage of their medications. The study is open access and definitely worth a read; we dig into some of the outcomes below. 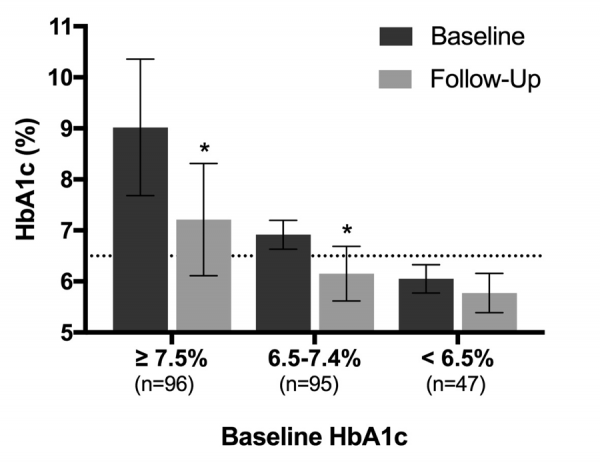 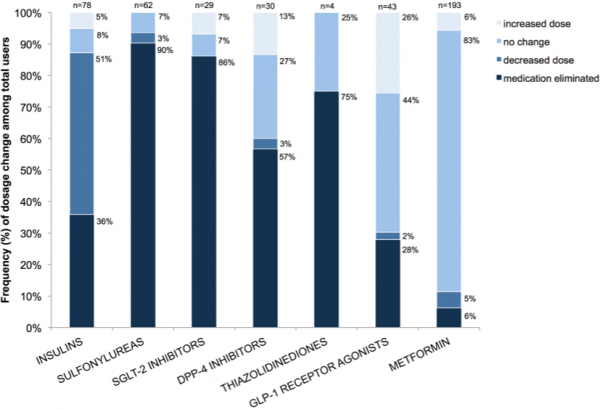 2. the Virta Program Is Currently Available Through Some Self-Insured Employers and Out-of-Pocket to Patients at ~$400/month for the first year

The Virta program is now available through self-insured employers, payers, health systems, and people with type 2 diabetes able to pay out of pocket (~$400 per month for the first year). Patients can apply directly to receive a free consultation with the Virta care team, and physicians can consult with the care team to discuss patient referrals. It is not clear which payers or employers are covering Virta now (we assume only a few), but the company told us most come through employer-sponsored health plans (none specified). Notably, some employers are even offering Virta to people with prediabetes – great to hear. Monthly and yearly payment options exist for those paying out of pocket, and Virta also offers a patient assistance program based on the ability to pay. We wonder how widely Virta will be covered among traditional insurers and how quickly.

Virta Health was co-founded by Sami Inkinen (CEO; former President of Trulia) and two very well known ketogenic diet and metabolism researchers: UC Davis’ Dr. Stephen Phinney (Chief Medical Officer) and Ohio State University’s Dr. Jeff Volek (Chief Science Officer). Both Drs. Phinney and Volek have had impressive careers in academia. Dr. Phinney has an MD from Stanford, a PhD in Nutritional Biochemistry from MIT, and did his fellowship at Harvard. Dr. Volek has published over 300 peer-reviewed papers and received his PhD from Penn State (some of his lectures on YouTube, like this one, have over 100,000 views – wow!). Mr. Inkinen, a very big-deal guy, co-founded Trulia, helped oversee its multi-billion sale (for $3.5 billion – see compelling NYT story here) and is an alum of McKinsey, Nokia, and Microsoft. The Virta Health team is already 54 employees, ranging from clinical experts to design and engineering. It is a highly compelling group – we recently visited the offices and were extremely impressed by the focus and drive of this entrepreneur and the entire team that we met in their downtown San Francisco offices.

Impressively, Virta is backed by $37 million in funding from notable technology and healthcare investors, including Venrock, Allen & Company, Obvious Ventures, Redmile Group, and Scifi VC. This investor group’s technology experience is impressive – see Venrock’s portfolio here (includes Apple and Intel, among many others); Allen & Company here (includes Zagat, Pandora, Flatiron Health, among others); Obvious Ventures here (started by Twitter co-founder and former CEO Evan Williams); Redmile Group here (an investor in Xeris and One Medical, among others); and Scifi VC here (started by former Payal founder Max Levchin). We see this group as a vote of confidence in Virta’s business model and go-to market strategy. However, the technology experience in this investor group is definitely deeper than the healthcare experience.

The press release announcing Virta’s debut highlights the company’s highly ambitious goal: reverse type 2 diabetes in 100 million people by 2025. This would be moonshot-level impressive and require achieving some enormous scale in the next eight years. Assuming only half of those with diabetes globally are diagnosed (~200 million), this means Virta must reach roughly 50% of the global diagnosed population in eight years. Obviously, even treating hundreds of thousands or millions of patients rests on longer-term and sustained outcomes, highly scalable technology and coaching efficiency, and an attractive business model for payers, health systems, and countries. Treating hundreds of thousands is itself a real accomplishment at a population level; it was very interesting to us and perhaps the only major misstep we saw to set a goal of such awesome proportions before proving diabetes reversal in even a thousand patients. Still – a goal is a goal and the company can certainly create the goal that it likes!

A promising aspect of the Virta program (besides its early efficacy) is the potential for cost savings, especially those with longstanding diabetes. Unlike diabetes drug approaches of comparable efficacy, to date, in this small trial, Virta reduces medication load in the vast majority of patients. Public outrage over the price of drugs (insulin in particular) continues, and Virta could provide a possibly less costly avenue for individuals to achieve a lower A1c, weight loss, and better cardiometabolic health, though the pricing certainly is not, vs. costly drugs alone, inexpensive. We’re not sure if the pricing of $400 per person per month is consistent for direct-to-patient vs. self-insured employers/insurers. We also don’t know how low that price can go once Virta achieves more scale and experience – could it get to $50 per month? It’s unclear, but from Mr. Inkinen’s comments above, this seems to be part of the plan. The benefit of Virta’s virtual model is it could be quite scalable with technology, but reaching millions or tens of millions of patients is obviously a serious step function change. How many patients can Virta’s current clinical team manage? What is the company’s ultimate goal for coach/physician productivity? Assuming Virta can ultimately handle an ambitious 500-1,000 patients per team (we assume at least one coach paired with one physician), caring for 1 million patients would require 1,000-2,000 teams (2,000-4,000 employees).

The extremely low-carb (<30 g/day), high-fat ketogenic diet at the cornerstone of Virta’s program stands in contrast to the ADA’s historic dietary recommendations, where the recommended diet is usually moderate in carbs (~40% of total calories) and low in fat. The ADA has somewhat relaxed its stance on dietary fat in recent years (“individualized” approach, per its 2014 recommendations), but historically, the organization has not staunchly advocated for low-carb, high-fat approaches – despite their proven value for improving glycemia, insulin dosing safety, weight, diabetes hassle, and more (see Virta’s citations here and read Adam’s diaTribe columns here).

Q: As the study continues, will one-year and two-year data confirm these promising early results? How would results look if the same technology was deployed with “standard” low-fat diet advice? Will results be maintained

Q: Can Virta participants sustain the ketogenic diet (<30 grams of carbs per day) over a longer period of time? How would results vary with slightly higher levels of carb intake (e.g., 60 or 100 grams of carbs per day)? What degree of ketosis is the minimum effective dose for improving glycemia and metabolic health? How much individual variation is there?

Q: Are there plans to use this program as an effort toward diabetes prevention? Could this be deployed in type 1 diabetes? Will the study’s success in a type 2 population bode well for other populations?

Q: How did the outcomes compare between the majority of participants who had diabetes (i.e., A1c > 6.5%) at baseline versus the minority without diabetes but who were taking anti-diabetic medications?

Q: Who were the responders and non-responders in this study? Did the same cohort of participants experience the trifecta of A1c reduction, weight loss, and medication elimination, or did participants instead experienced mixed results in achieving a subset of these different outcomes?

Q: What will payers think of these data? How cost-effective and scalable is Virta’s approach – how many patients can one team (e.g., coach + physician) handle? How will Virta’s pricing and business model change over time? How much consumer demand will it see initially ($400 per month for the first year)?