Based on financial results from the nearly 30 public companies that we regularly track, this diabetes/obesity industry roundup provides a bird’s eye view of important trends in 1Q17 and 2Q17 (“1H17”), as well as key details on each major drug class and device category.

This report is divided into four sections for overall industry highlights, diabetes therapy, diabetes technology, and obesity, which you can navigate through the table of contents. We analyze each therapeutic area’s sales performance and provide graphs with current and historical trends. Please note that in many cases, the data we’ve used for our analysis reflects our best estimates, since a number of companies don’t disclose financial information in great detail. We’ve made the basis of our assumptions clear in the sections below, but recognize a number of the estimates may be wrong in magnitude and direction. If you have opinions on how an estimate could be improved, please reach out and let us know!

Now onto the industry highlights…

3. The GLP-1 agonist class grew substantially in both 1Q17 and 2Q17, with sales rising 35% YOY to $1.4 billion and then 29% YOY to $1.6 billion. This class accounted for 54% of industry growth in 1Q17, despite comprising only 12% of total industry revenue. Similarly, the class accounted for 57% of industry growth but only 13% of industry revenue in 2Q17. Notably, pooled GLP-1 revenue is growing faster from a higher base vs. pooled SGLT-2 inhibitor revenue, despite the latter drug class being newer to the commercial market. GLP-1 agonists are on track to hit $6 billion for the full-year 2017, after narrowly missing the $5 billion mark in 2016.

4. The SGLT-2 inhibitor market grew 18% YOY in 1Q17 to $715 million, followed by 20% YOY growth in 2Q17 to $857 million. SGLT-2 inhibitors drove 16% and 22% of overall diabetes industry growth in 1Q17 and 2Q17, respectively, meanwhile capturing 6% and 7% of total industry revenue. Within this class, it seems that Lilly/BI’s Jardiance (bolstered by positive CVOT data and a new CV indication) is “stealing” share from J&J’s Invokana in terms of volume/sales, while sales of AZ’s Farxiga rise steadily.

5. The DPP-4 inhibitor market fell 3% YOY in 1Q17 and fell 4% YOY in 2Q17, to $2.2 billion and $2.5 billion, respectively. Pooled quarterly revenue has hovered ~$2.4 billion for several consecutive years – this is still a sizeable market, despite minimal growth of late.

6. In BGM, we estimate the “Big Three” (Roche, J&J, and Abbott) pulled in ~$1.0 billion in 1Q17 (down 2% YOY) and ~$1.1 billion in 2Q17 (down 7% YOY) – this excludes our estimates for their pump and CGM revenues, meaning true sales trajectory could look better or worse. This is the first time in our roundup that we have excluded our estimates of FreeStyle Libre sales from Abbott’s revenue.

7. The worldwide CGM market grew to an estimated ~$361 million in 1Q17 (up ~50% YOY) and a record-high ~$399 million in 2Q17 (up ~49% YOY). This includes Dexcom, our best estimates for Medtronic and now Abbott’s FreeStyle Libre, and Senseonics. International momentum is driving the field – we estimate a record-high ~49% of global CGM sales came from outside the US in 2Q17, driving an impressive ~81% of the category’s estimated growth. By our estimates, FreeStyle Libre contributed nearly 60% of the category’s growth in 1H17. Assumptions below!

8. We estimate the insulin pump/delivery devices market fell ~4% YOY in 1Q17 (~$557 million) and ~9% in 2Q17 (~$513 million). Insulet drove all of the industry’s growth (by our estimates) in both quarters, driven by strong 26%-28% YOY worldwide OmniPod growth. We estimate Medtronic pumps saw ~3% and ~7% YOY declines in the two quarters, given that CGM sales have now risen to ~25% of its overall sales (i.e., pumps are becoming a smaller fraction of revenue). Given the recent closing of J&J’s Animas, we’ve estimated sharp ~50% YOY declines in Animas sales in 1H17 – this played a large role in our estimate of the category’s decline. 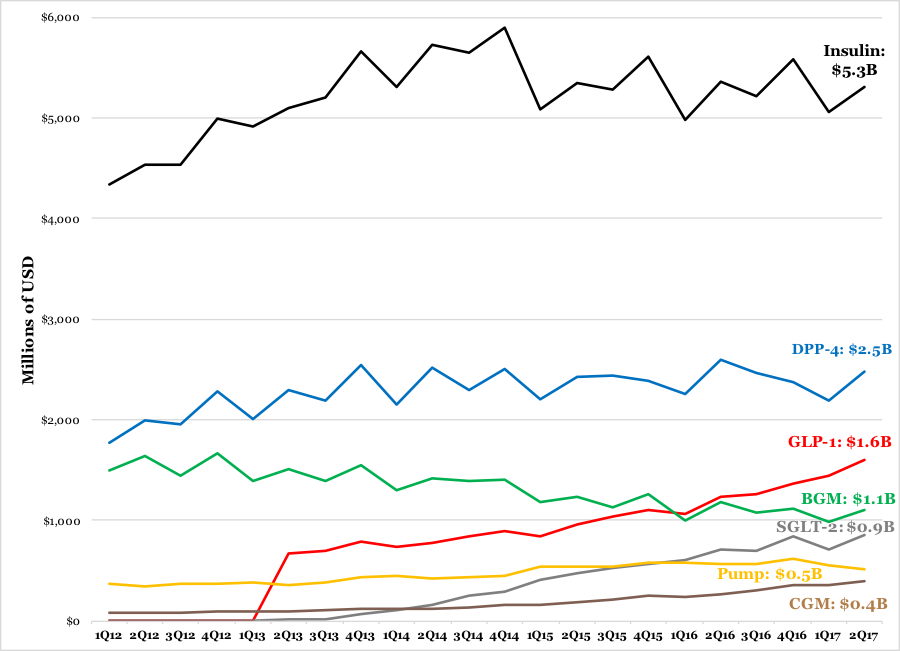 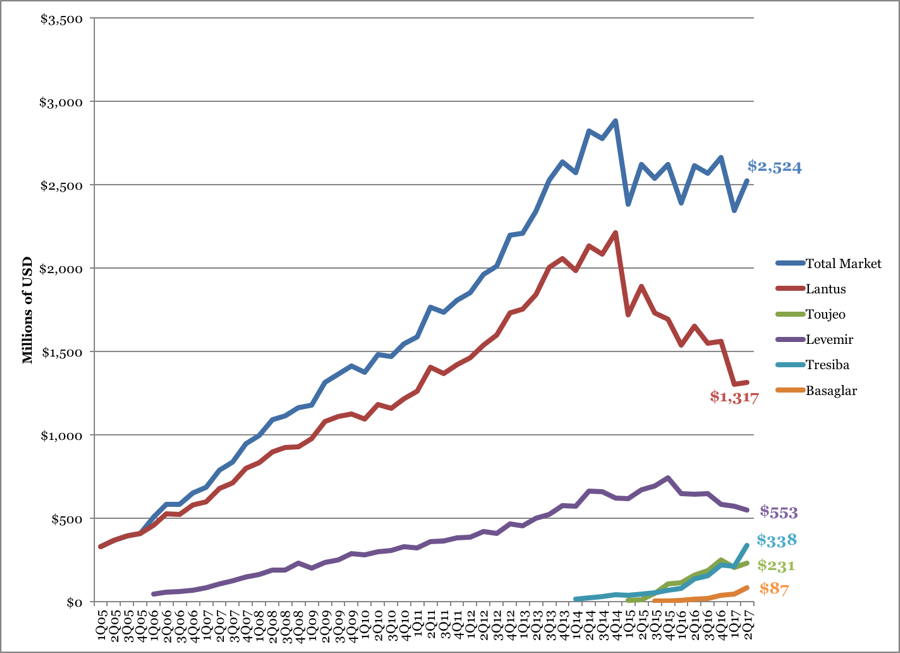 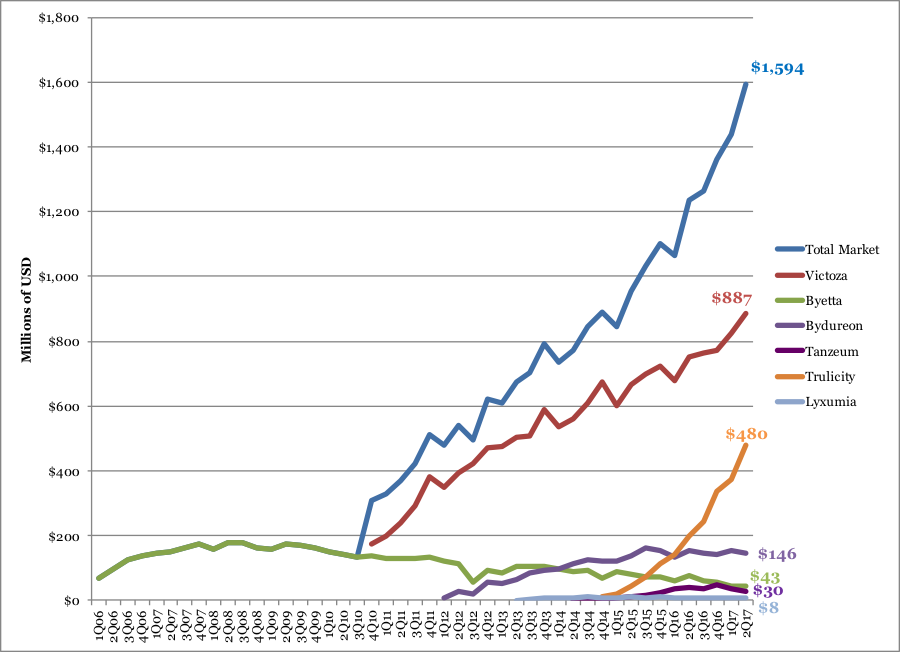 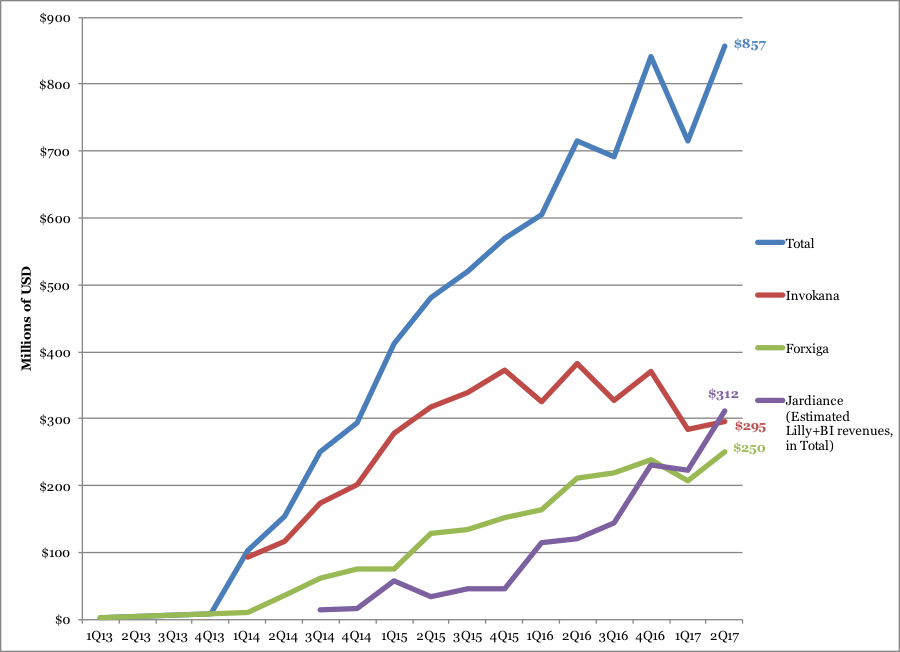 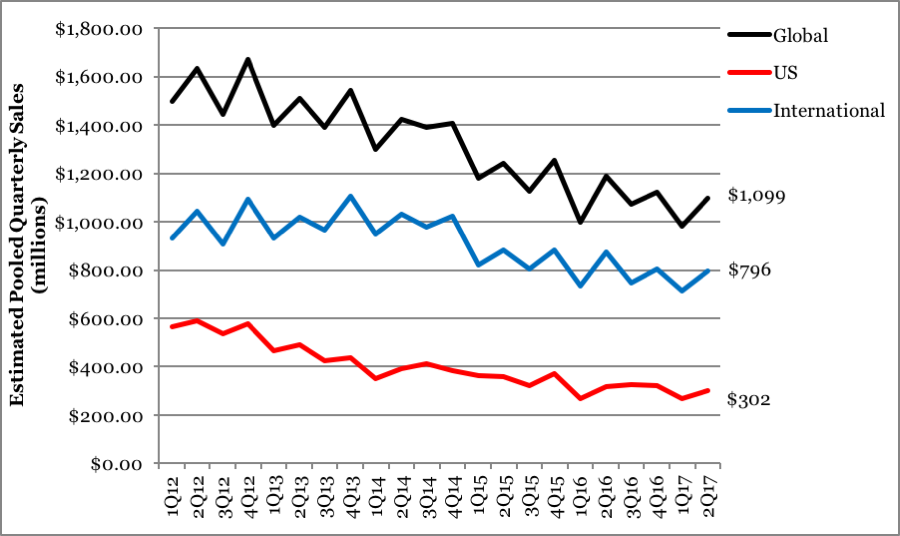 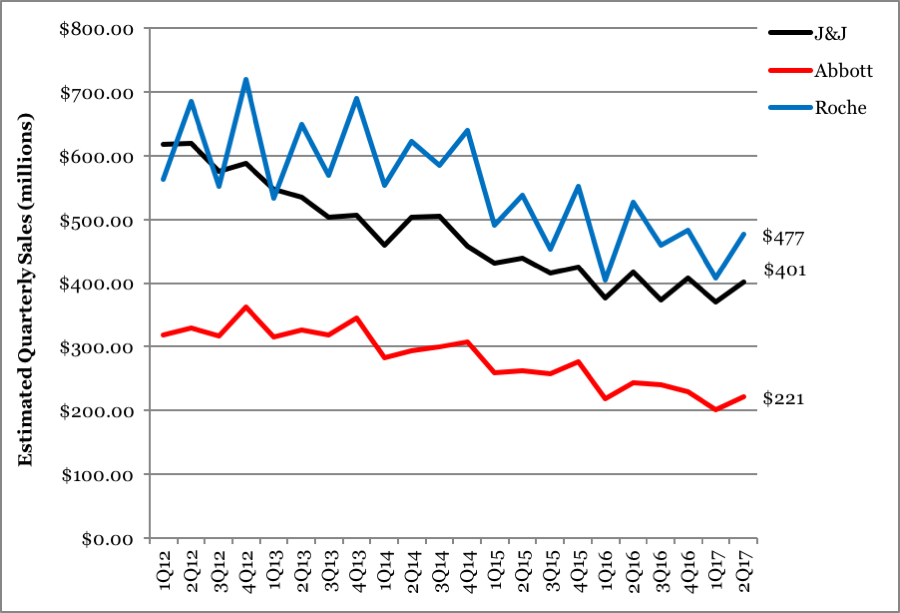 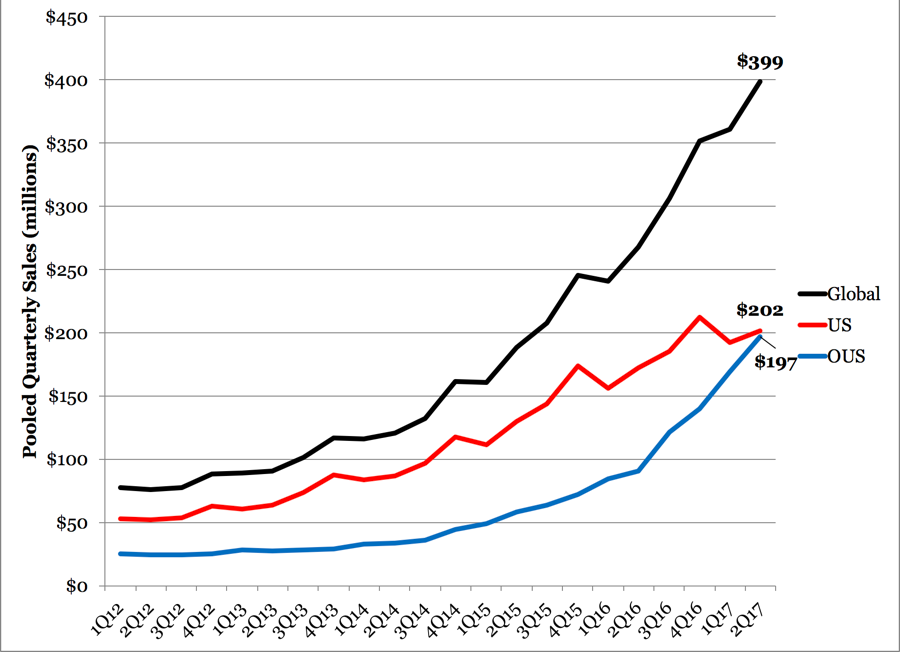 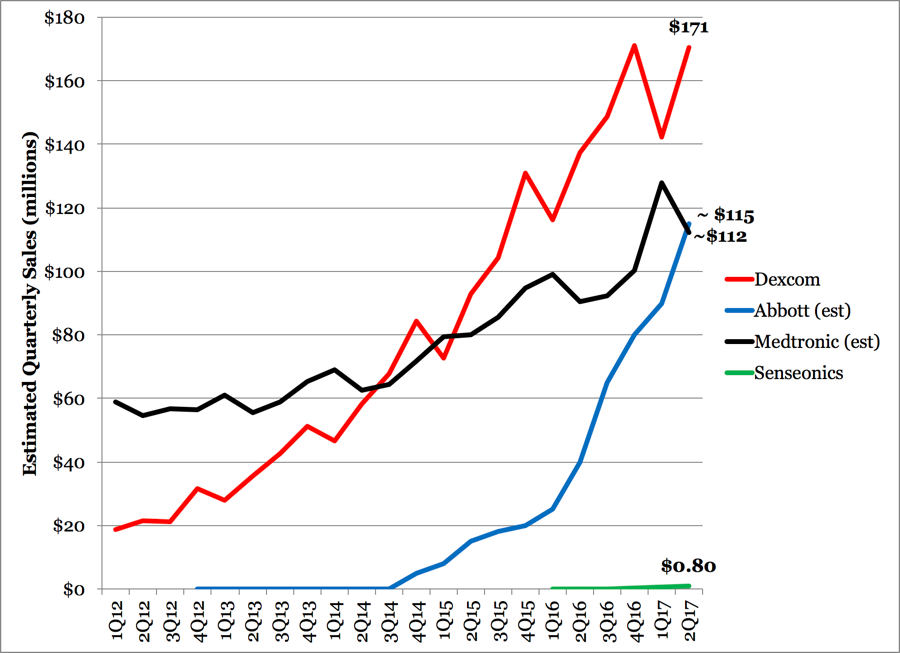 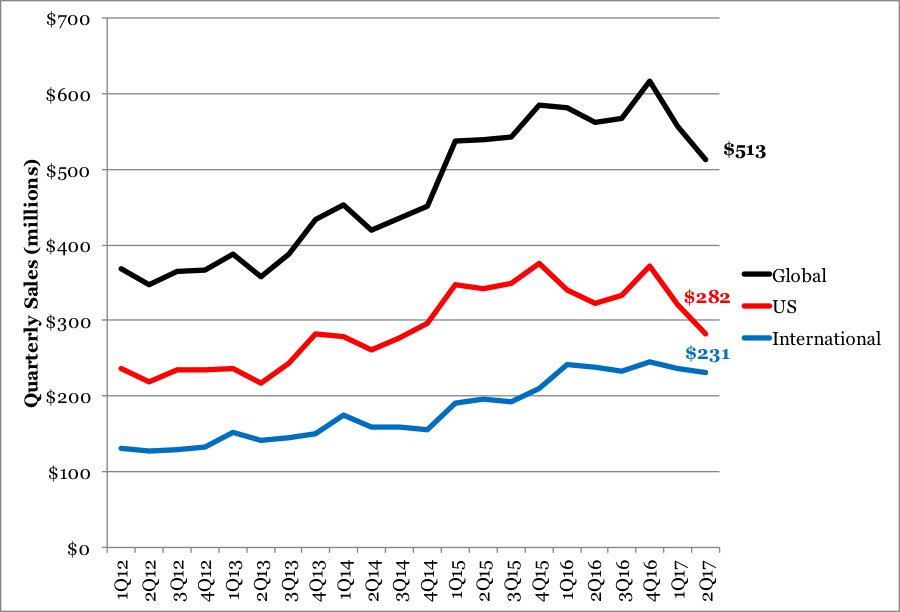 9. Sales Rise ~66% in 1H17, with Majority of Growth Coming from Novo Nordisk’s Saxenda 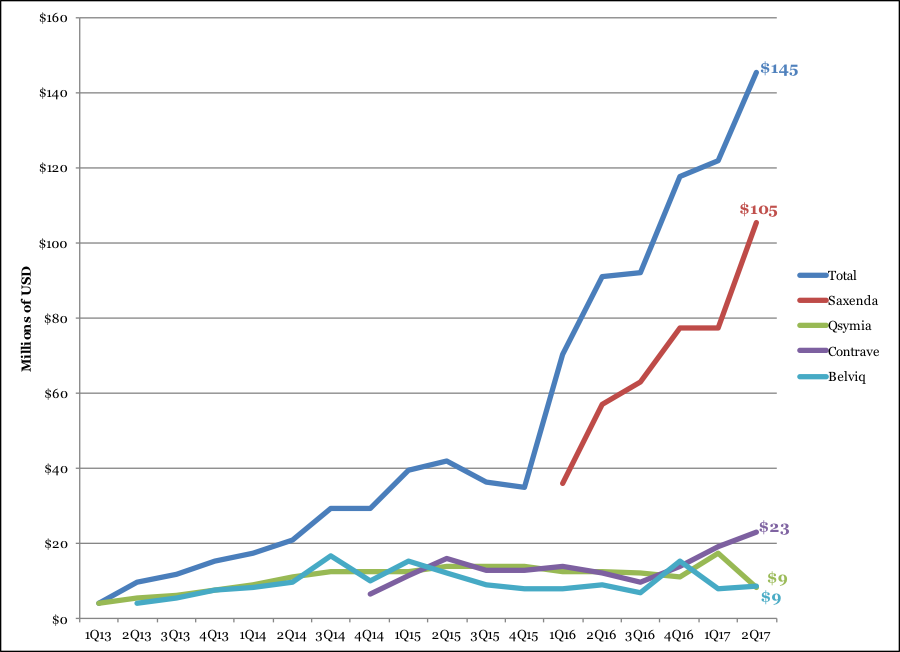