1. Global Diabetes Care revenue totaled 595 million CHF (~$601 million) in 4Q15, declining 11% as reported and 3% operationally year-over-year (YOY); 4Q sales did not break 600 million CHF for the first time this decade. Remarkably, management optimistically characterized the business as a “tale of two cities,” alluding to some positive indicators despite the broader negative picture: 5% BGM volume growth in the US, 8% operational growth in insulin delivery.

4. Pooled global revenue for J&J, Roche, and Abbott totaled ~$1.4 billion, falling 10% relative to pooled revenue in 4Q14 (~$1.5 billion). Abbott had the strongest operational performance in the quarter (up 2% YOY) vs. J&J (down 2%) and Roche (down 3%). YOY pooled sales for the three companies have now fallen for 15 (!) consecutive quarters.

5. Roche confirmed the 2016 EU launch timeline for its novel CGM – now called the “Accu-Chek Insight CGM” – though there were no updates on commercialization, accuracy, or form factor. We love the name. The new name does make us wonder whether it will actually be a sensor-integrated pump, since Roche already markets the “Accu-Check Insight” pump system. The competition is fierce in glucose sensors in Europe, with Abbott’s FreeStyle Libre, Dexcom’s G5, and Medtronic’s MiniMed 640G but the penetration remains low and we expect a good product will add to and hopefully help create a thriving commercial market – penetration remains very low due to reimbursement. How will Roche’s device stand out?

6. Roche’s supplementary materials projected a 2016 EU launch for a new smartphone/cloud-connected BGM, the Accu-Chek Guide. This is the first we have heard of this new BGM, which will pair with the bolus advisor on the Accu-Chek Connect app.

7. There were no updates on the Solo MicroPump (Roche’s patch pump). At this point, we assume this product is not likely coming to market, though the company was working on it as of a few quarters ago.

8. Supplementary materials also called out the 2015 EU launch of Roche’s next-gen cobas c 513 A1c analyzer, characterizing it as a key pipeline development in 2015. This is great from our view – A1c has helped substantially with better diagnosis rates and we’re happy to see progress on this front as early diagnosis is so key to patients getting in optimal control and staying there.

10. Roche’s presentation slides noted that the company expects a moderate decline in Lucentis sales in 2016.

1. Global Diabetes Care revenue totaled 595 million CHF (~$601 million) in 4Q15, declining 11% as reported and 3% operationally year-over-year (YOY). The performances comes against a relatively easy comparison to 4Q14 when sales fell 1% as reported and grew 1% operationally. The performance does mark the highest quarterly revenue in 2015 and a striking sequential increase of 25% vs. 3Q15, though we would position this “silver lining” very conservatively since it’s been such a tough market. Sequential gains between 3Q-4Q have been in the ~16-26% range over the past four years and the numbers are not surprising when considering the very low base in 3Q15 (when sales of 476 million CHF marked an all-time low). Indeed, a closer look at the numbers tells the true story as this is the first year in our Roche model (which goes back to 2004) that 4Q sales have not broken 600 million CHF – a testament to just how challenging this business has been. [For context, 4Q sales peaked at 904 million CHF in 2007.]

2. In North America, Diabetes Care revenue totaled 121 million CHF (~$122 million) in 4Q15, with flat growth YOY against an easy comparison to 4Q14 (sales fell 8% YOY). Management did not comment on the North American business though supplementary materials did allude to a “challenging US market” due to spillover effect of Medicare prices on private sector. This was no surprise though – on a positive note – we would point out that 4Q15 does mark the first non-negative YOY performance since 1Q14. That said, it’s far to early to forget how tough this region has been for Roche – especially in light of the full year numbers (see below). For context, in the past eight years (since 1Q08), Roche has recorded only four quarters of positive YOY reported growth in North America. Sequentially, revenue was up a whopping 75% from a very, very low base in 3Q15 (sales of 69 CHF million marked an all-time low). The seasonality of the BGM business means that sales pretty much always pick up in 4Q (positive/flat sequential growth every year since 2006).

3. Outside North America, Diabetes Care sales totaled 474 million CHF (~$479 million) in 4Q15, falling 14% as reported YOY against growth of 1% YOY in 4Q14. The performance marks four consecutive quarters of YOY declines following a string of two straight quarters of YOY growth for the business. Though this is not promising, we assume some of this weakness is currency driven. It is tough to say for sure since Roche does not report operational sales for the overall international business. Sequentially, sales grew 16% against a very low base in 3Q15 (407 million CHF). As a reminder, Roche breaks out its non-North America revenue into two groups – Europe, Middle East, and Africa (EMEA) and Latin America, Asia-Pacific, and Japan (RoW):

4. Pooled global revenue for J&J, Roche, and Abbott totaled ~$1.4 billion, falling 10% relative to pooled revenue in 4Q14 (~$1.5 billion). This comes against an easy comparison, as combined revenue declined 8% a year ago. While some of the weakness comes from currency headwinds, it cannot explain the entire drop – YOY pooled sales for the three companies have now fallen for 15 (!) consecutive quarters, going far beyond the recent strengthening of the dollar. Pooled sales broken out by region (see below) support this explanation, as both US and international markets have seen declines. On a sequential basis, pooled sales grew 11%, though this growth is a regular cyclical pattern between 3Q and 4Q. 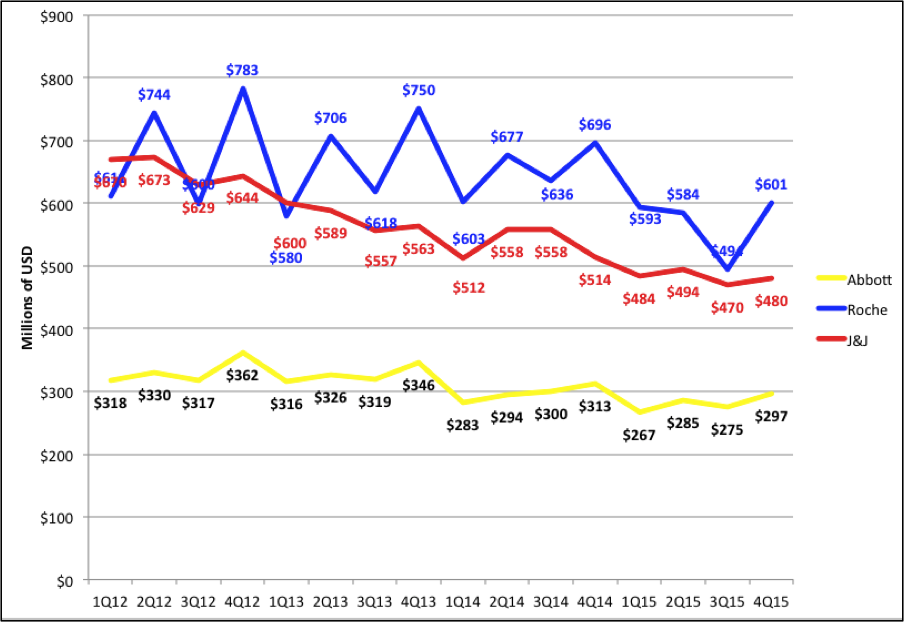 5. Management confirmed the 2016 EU launch timeline for its novel CGM – now being called the “Accu-Chek Insight CGM” – though there were no updates on commercialization, accuracy, or form factor. We found it encouraging to see supplementary materials characterize the CGM as a “key” 2016 launch and even more promising to hear Mr. Diggelman express enthusiasm for the product in his prepared remarks – the transparency seems to speak to significant internal confidence in the timeline. That said, we still think that Roche has an uphill battle ahead given the greater experience and next-gen innovation happening at Abbott (FreeStyle Libre), Dexcom (G5, G6), and Medtronic (Enlite 3). What will set Roche’s CGM apart?

6. Roche’s supplementary materials projected a 2016 EU launch for the Accu-Chek Guide (a next-gen BGM system with smartphone connectivity). This is the first we have heard of this new BGM. The slide deck provided few details on the specific timeline or meter features though management has informed us that the device will talk to the Accu-Chek Connect app (Android and iOS). In addition to the FDA-approved bolus advisor built into the current Accu-Chek Connect app, the next-gen app will contain a 3-day profile (from the STEP study) to facilitate patient motivation. The new system will also work with the online platform to enable intuitive data sharing with caregivers and healthcare providers. Further, the new system will feature on-board pattern detection and an entirely new, more accurate test strip that performs on a wide temperature and hematocrit range.

7. There were no updates on the Solo MicroPump (Roche’s patch pump). We heard several quarters ago that the company is still working on the Solo MicroPump internally, though we’re not sure if this is still the case – we can’t imagine this is the place it most wants to put resources as this pump was sort of behind Insulet awhile back and Insulet is moving ahead. The patch pump business model is challenging (even though overall they have traditionally collected more funds than the traditional pump players over four years), and the slow movement on this product is not surprising. The main competitors in full-featured patch pumps are Insulet (total revenue reached a record high $87 million in 3Q15) and Cellnovo in Europe (early days, as 4Q15 saw 102 systems shipped).

8. Supplementary materials also called out the 2015 EU launch of its next-gen cobas c 513 A1c analyzer as a key pipeline development in 2015. The next-gen, “market leading” product boasts increased efficiency by doubling the throughout from 200 to 400 patients per hour that Roche’s 3Q15 slide deck stated is “five times faster than its closest competition.” [The competition in the point-of-care A1c market is harder to track … Alere and Abbott both have A1c analyzers, and we assume there are others.] Roche has previously estimated the target market for A1c testing at ~520 million CHF. We think this is great news since so much more work needs to be done on diagnosing patients earlier, across the globe, and this helps enable that.

9. US sales of Lucentis (intravitreal ranibizumab) declined 14% YOY as reported and 17% in constant currencies to 378 million CHF (~$382 million) in 4Q15, while full-year 2015 sales declined 15% operationally to 1.5 billion CHF (~$1.6 billion). The drug did retain its position at #4 on Roche’s “Top 20” Pharma Division products list – a testament to the relatively high base. As in previous updates, management attributed weakness to increased competition for Lucentis in diabetic macular edema (DME) and age-related macular degeneration. Sequentially, sales grew 16% against a very low base in 3Q15 (sales of 327 million CHF, $339 million).

10. Roche’s presentation slides noted that the company expects a moderate decline in Lucentis sales in 2016. We wonder whether sales will continue to be negatively impacted by the results of a recent comparative effectiveness study showing greater gains in visual acuity with Eylea vs. Lucentis in patients with worse than ~20/50 vision at baseline. Off-label use of Genentech’s Avastin (bevacizumab), which offers a significant price discount compared to the two approved options, is also likely cutting into sales for both Lucentis and Eylea.