Our first conference of 2020 is underway as more than 170,000 people and 4,400 exhibiting companies have descended on “America’s Playground,” Las Vegas, NV, for CES 2020. The conference spans across eleven convention centers and hotels and 2.9 million square feet, but we focused on the Digital Health Summit in The Venetian during days #1-2. See below for our top six highlights!

1. CDRH Director Dr. Jeff Shuren on the Future of Device Regulation: “If We Don’t Allow for Iterations to Occur Quickly, We Put Patients at Risk”

In a brief, but dynamic, presentation, the FDA’s Center for Devices and Radiological Health (CDRH) Director Dr. Jeff Shuren shared the Agency’s bold and progressive “Grand Vision” for the future of device regulation. Throughout his presentation, Dr. Shuren came out against the idea that advancing device innovation comes at the expense of patient safety. Instead, Dr. Shuren said, “If [the FDA] can advance innovation to have safer and more effective technologies, technologies that address a patient’s unmet needs and mitigate harm from their disease, that’s about safety. In the case of [software as a medical device (SaMD)], if we don’t allow for certain iterations to occur quickly, we put patients at risk, such as cybersecurity.” We have seen the effect of CDRH’s forward-thinking approach to device regulation close-up in diabetes, with creation of brand new, interoperable iCGM, ACE pump, and iController designations all created during a ~20-month period. Not only do these make interoperability of automated insulin delivery components much easier, they also created lower-risk class II pathways for CGM and controllers (insulin pumps were already class II devices). Altogether, the changes are a huge win for both patients and manufacturers, enabling faster innovation, less regulatory burden, and more patient choice. Throughout days #1-2 of CES 2020, we heard multiple panelists express the view that healthcare was risk-averse and conservative in its approach to technology. While this can be true, especially in comparison to the incredibly fast-moving world of consumer technology, it’s incredibly encouraging to see ambitious, modern thinking and action from CDRH, starting with its leadership.

Cooley LP’s Geoffrey Starr provided an update on digital health funding in 2019, characterizing it as “the year of the digital health IPO.” Last year saw a total of nine (!) digital health companies go public, kickstarted by Livongo’s ~$350+ million IPO in July. Before those nine IPOs (Change Healthcare, Phreesia, Livongo, 10X Genomics, Freenome, Peloton, HealthCatalyst, Progyny, and Smile Direct Club), no digital health companies had gone public since 2016. This IPO momentum may continue into 2020, with One Medical filing its S-1 earlier this week. Impressively, digital health made up “almost one in three” of all healthcare deals in 2019, including more than 100 mergers and acquisitions, including Alphabet’s $2.1 billion acquisition of Fitbit. Mr. Starr made a few predictions for digital health in 2020:

Citing the freshly released Rock Health 2019 Digital Health funding report, Mr. Starr shared that digital health funding totaled $7.4 billion in 2019 across 374 deals (average deal size ~$19.8 million). Both numbers are slightly short of the records set in 2018 ($8.1 billion across 380 deals) and while they are larger than the $7.3 billion across 349 deals that were forecast by Rock Health in October, the average deal size forecast was lower than the $20.9 million forecast last fall. Diabetes-related digital health fund raises in 2019 included Beta Bionics’ $126 million Series B, Omada’s $73 million Series D, One Drop’s $40 million Series B, and more.

Day #1 of CES included a valuable panel, “C:Space Storyteller: AARP,” which featured AARP CEO JoAnn Jenkins and Samsung VP of Digital Health Natalie Schneider, with Forbes’ Marty Swant as moderator. (Check out the 32-minute conversation here.) Ms. Jenkins kicked off the panel by urging the audience to reconsider stereotypes about technology and the aging population, emphasizing that “global aging is the greatest opportunity of our lifetime.” The entire 30-minute panel was full of captivating discussion that touched on current tech opportunities ripe for business, effective marketing, and emerging trends with implications for diabetes, chronic conditions, and healthcare innovation among the 50+ age demographic. This discussion reminds of Consumer Electronics Show Unveils the Newest in Aging Tech from CES 2019.

Technology and Chronic Disease Care for the 50+ Population

Economic Contributions of the 50 + Age Group

At last year’s CES, Omron revealed the first-ever wrist-worn blood pressure monitor, HeartGuide, and its companion HeartAdvisor app (App Store; Google Play). The $500, class II, 510(k) wearable made a splash in 2019, winning multiple awards (e.g., the prestigious Red Dot award, Time’s Best Inventions 2019) with uptake beyond CEO Ranndy Kellogg’s “biggest expectations.” According to Mr. Kellogg, users have used the device to drive behavior change, as they can see the effects of certain behaviors on their blood pressure. Importantly, as Mr. Kellogg noted, these insights don’t need to be surprising to be compelling: for example, users who can see their blood pressure rise after they drink coffee are likely to reduce their coffee consumption, even though that effect is intuitive. Of course, we couldn’t help but think of the countless stories we’ve heard about CGM. Seeing one’s CGM trace spike after eating a certain meal or dip when walking, many people have been able to identify positive (“Bright Spot”) and negative (“Landmine”) behaviors and create remarkable changes. Omron also launched its HeartAdvisor app alongside HeartGuide, which records blood pressure, activity, and sleep data for users, allowing them to make connections that may not be intuitive. The data can also be uploaded to the cloud and shared with physicians. Looking at the HeartAdvisor app display (picture below), the blood pressure readings look strikingly similar to CGM traces. Of course, many diabetes digital health companies have been moving beyond glucose monitoring, adding in blood pressure monitoring, activity trackers, and more (e.g., Dario, Livongo, One Drop, Omada). Given the high comorbidity of hypertension and type 2 diabetes, these sorts of horizontal expansions seem natural. Could insights from HeartAdvisor and HeartGuide be combined with CGM apps, e.g., Dexcom Clarity, and vice versa? 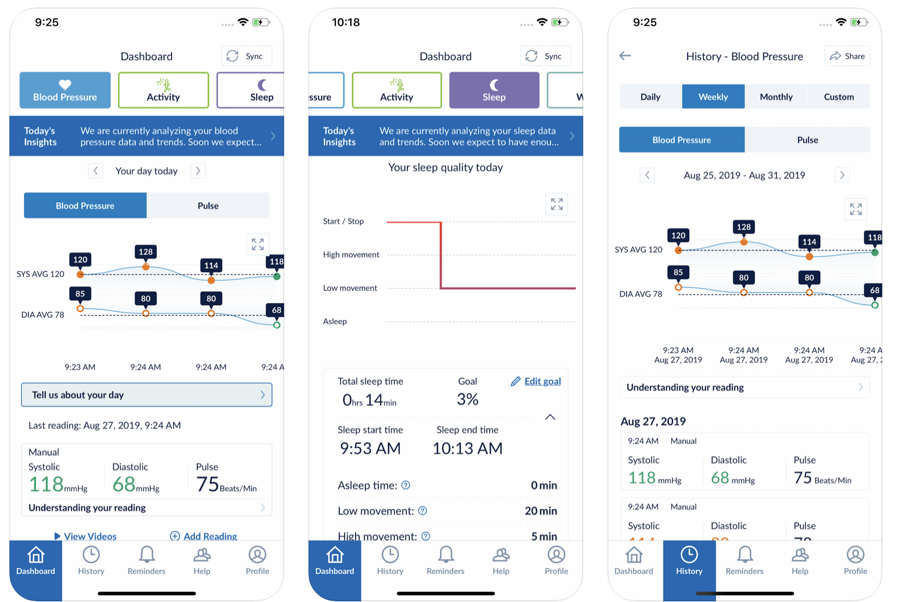 In a panel hosted by Emmy-winning television host Katie Couric, employer-sponsored wellness benefits were a recurring theme. Of course, this comes as no surprise, given that self-insured employers are a natural place for digital health companies to find clients. Metlife Vice President HR Global Health Tom Ferraro noted that nearly every single company has employee health insurance as a “major budget item” and employees with chronic conditions are a significant part of that. At Metlife, employees with diabetes cost “two times more” than those without diabetes. According to Mr. Ferraro, traditional approaches (e.g., “lunch and learn” about wellness) were labor-intensive and costly, and did not provide personalized care. With digital programs, the interventions can be personal and flexible. Mr. Ferraro shared a few promising statistics on some of its digital health programs. Metlife now offers cellular-enabled BGMs to its employees with diabetes with data push to nurses who can alert employees should about any concerns. With this simple program, Metlife observed a 23% (relative) reduction in hospital admissions due to diabetes and a 12% reduction in related total healthcare costs. Last year, Metlife implemented a virtual weight loss program, which included a WiFi-connected scale, a virtual nutritionist, and exercise specialists. Fifteen hundred employees took part in the program, losing a collective 5,500 pounds (~3.7 pounds/person).

6. CES 2020 Potpourri: Top Tweets and Facts Shared Throughout the Day