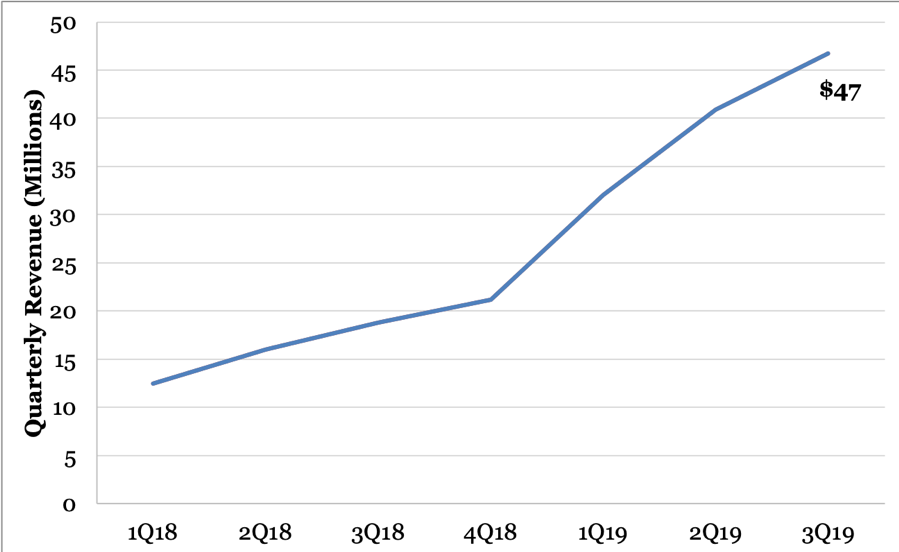 Livongo reported 3Q19 revenue of $47 million, rising 149% YOY and 14% sequentially from 2Q19. Most of the revenue growth continues to be driven by Livongo for Diabetes, which offers the cellular-enabled BGM, unlimited strips, and digital and human coaching. Management noted new and existing clients. CEO Zane Burke did share that “over 20%” of “estimated value of agreements” (i.e., future revenue committed over the coming years) came from Livongo’s newer offerings: hypertension, prediabetes/weight management, and behavioral health. Assuming pricing for Livongo for Diabetes is still ~$68 per member per month (“pricing has remained consistent”), Diabetes generated ~89% of Livongo’s overall revenue in 3Q19 (~$42 million). We estimated Diabetes revenue at ~95% of overall company revenue in 2Q19 (~$39 million in 2Q19), so it seems that Livongo’s other offerings are growing faster than Diabetes (albeit from a much, much lower base). 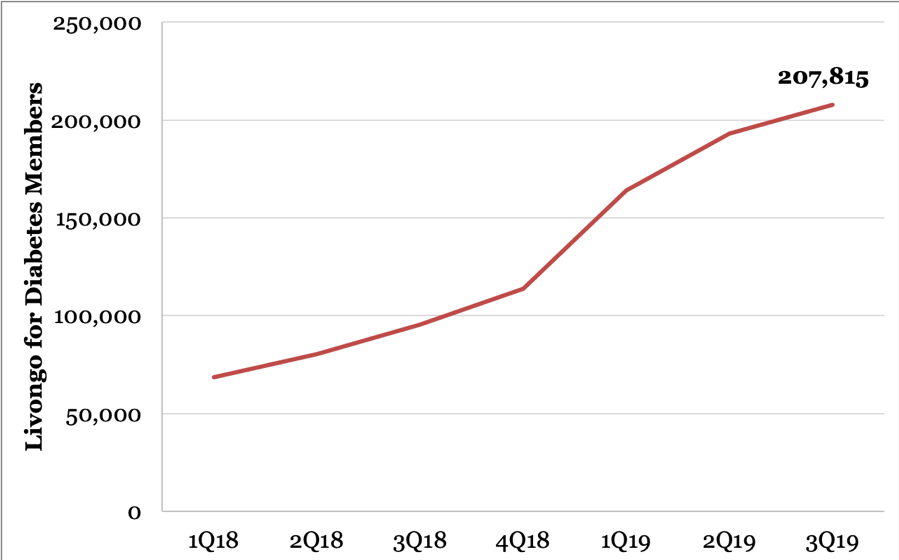 Livongo raised full-year revenue guidance to $168.5 to $169 million, an increase of $7 million at the low end and $9.5 million at the high end from 2Q19 guidance. Full-year revenue of $169 million would represent a 149% jump from $68 million in revenue in 2018 – a very strong start as a public company. 4Q19 revenue is guided for $49 million to $49.5 million, which would represent a 4%-5% sequential increase. The very tight guidance range likely stems from clear visibility on the business (recurring subscription model), the known pacing of client contract starts, good estimates on enrollment, and just seven weeks left in the year. Continued growth opportunities include driving higher enrollment at existing clients, cross-selling the new programs to existing clients, and expanding to reach new clients. Outlook for 2020 will be shared on the 4Q19 call.

Gross margin in 3Q19 was an impressive ~74%, up meaningfully from ~69% in 2Q19 and ~70% in 3Q18. Mr. Shapiro attributed the margin improvement to investment in its “AI+AI” (Aggregate, Interpret, Apply, and Iterate) engine, which improved coaching efficiency, and higher incremental margins from members added in prior periods, as the upfront device costs (e.g., cellular BGM) from previously added members were accounted for in the quarter they were added. Going into 4Q19, Livongo is expecting to maintain gross margins “consistent” with 3Q19.

Livongo saw more momentum for its non-diabetes programs: hypertension, prediabetes/weight management, and behavioral health. Livongo for Hypertension has now been fully integrated into Livongo’s platform and the “first phase” of Behavioral Health integration will complete by the end of this year, following Livongo’s myStrength acquisition in February. Integration into Livongo’s platform will mean a smoother experience for members, and easier reporting and billing for members across multiple programs. Livongo for Hypertension (cellular-enabled BP cuff) saw “particularly strong” pickup in 3Q19, and CVS Health, one of the largest PBMs in the country, expanded its contract with Livongo to include the hypertension and diabetes prevention programs. According to Mr. Burke, Livongo saw a “more than 500% year-over-year increase in recruitable people with hypertension” in 3Q19. Whether Livongo can actually convert these into members is an open question, but its strength in Diabetes should help drive uptake as a large share of its users with type 2 diabetes also have hypertension.

2. Telehealth Integrations Will Begin with Behavioral Health in January 2020, “Soon Expanding” to Diabetes and Hypertension

Late last month, Livongo announced partnerships with telehealth companies MDLive and Doctor on Demand to integrate telehealth into Livongo’s platform. “Virtual acute and primary care services” will be available through Livongo’s platform starting in January 2020, initially rolling out to Livongo for Behavioral Health and “soon expanding” to diabetes and hypertension. Live video calls add another layer of personal touch to Livongo’s care model, which includes cellular-enabled devices (BGM, BP Monitor), insights and “nudges,” the Livongo app, and remote 1:1 coaching. Management didn’t share any additional details on the partnerships in today’s call, but did express excitement about continuing to build out various care formats for members. See our report for a list of questions we have about the integration.

Also announced last month and briefly mentioned on today’s call, Livongo will now integrate data from wearable trackers from Apple, Fitbit, and Samsung. There weren’t any details on the data that is shared, but presumably it will start with steps, heart rate, and sleep. (An electrocardiogram (ECG) would also be possible with newer Apple Watches.) This data will be valuable for Livongo coaches, who will have more context to offer advice.