Tandem’s 1Q18 sales of $27 million rose a strong ~42% year-over-year (YOY) on a GAAP basis, albeit against an easy comparison to a 5% decline in sales in 1Q17. On a non-GAAP basis, sales were up a more robust ~54% YOY, as this excludes $1.5 million in deferred revenue recognized in 1Q17 (new technology program). This was the strongest Q1 performance in Tandem’s history, handily beating the previous Q1 record's $20 million when the t:slim G4 launch was ramping up (1Q16). Sequentially, 1Q18 sales fell ~32% from the blowout record in 4Q17 – this seems steep but is actually on par with the typical Q4-Q1 seasonality in Tandem’s business. 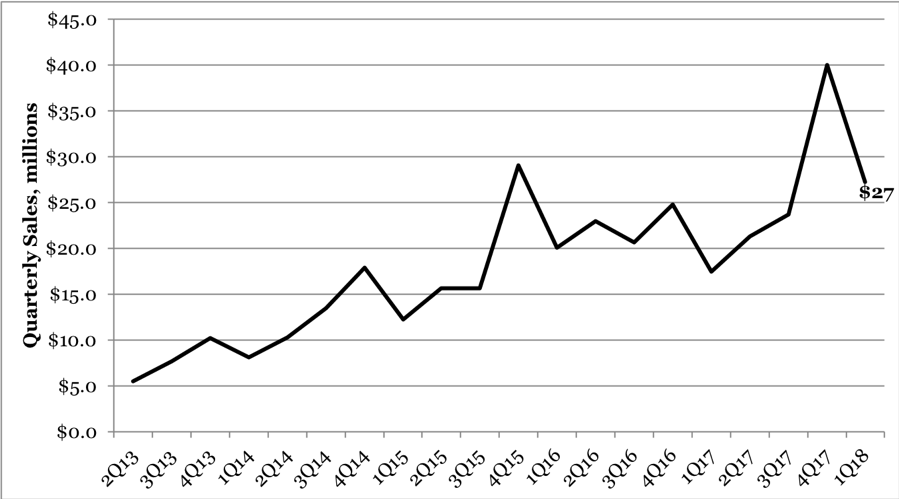 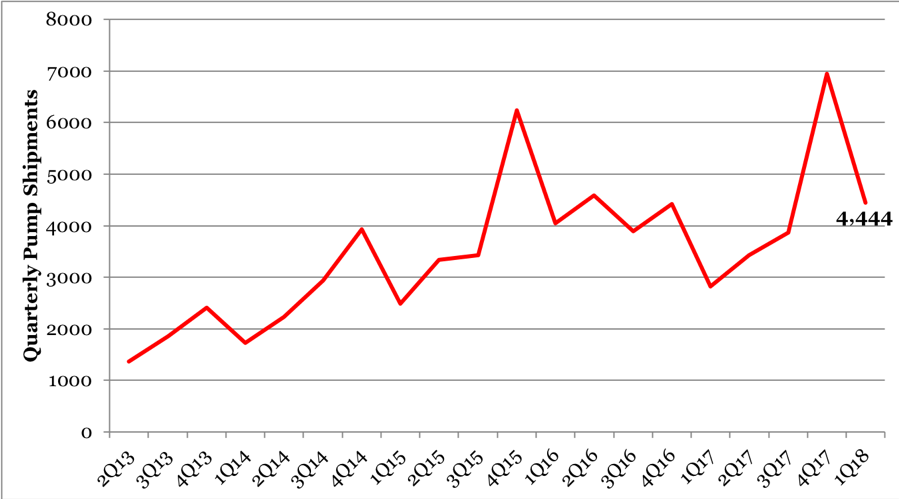 Management maintained the 2018 revenue guidance range – $132-$140 million, +26% YOY – but now expects to be on the “mid-to-upper end” of the range. This reflects optimism leaving Q1. CFO Leigh Vosseller again highlighted the five key drivers mentioned in 4Q17, three of which were evident in 1Q18 (renewals, Animas, infusion set sales): (i) launch of Basal-IQ this summer (currently under FDA review; see below); (ii) executing on renewals, with the goal of retaining 70% of existing customers (Tandem shipped 10,800 pumps in 2014, giving ~40% more renewal opportunities in 2018 than the 6,472 available in 2017); (iii) capturing more revenue from infusion sets, given a full year of the t:lock connector; (iv) Animas’ exit from the market, providing incremental patient opportunities; and (v) international market entry in 2H18.

Tandem’s cash position is the best it has been in years: as of March 31, the company had ~$82 million in cash and equivalents, reflecting: (i) ~$64 million in net proceeds from the equity financing completed in February 2018; and (ii) an additional ~$7 million in net proceeds raised from warrants exercised in 1Q18. The company believes current resources will take it to cash-flow breakeven in 2H19, assuming: (i) an installed base of >80,000 users ordering supplies consistently; and (ii) gross margins of 55%. Gross margin was 42% in 1Q18, up notably from 36% in 1Q17 – the second straight quarter with an improvement in the 5-6 percentage-point range. While the next 18 months will need to see significant gross margin improvement, Tandem could very well achieve the installed base number in 2018 – especially if it executes on the pipeline. Investor confidence has certainly been restored: Tandem’s market cap is now at ~$357 million, its highest point in two years.

Tandem’s international plans have not changed since Q4: the t:slim X2 with Dexcom G5 integration has been submitted to Health Canada and a CE Mark is expected in 2Q18. The first international sales are still expected in 2H18. Sales outside the US are not expected to meaningfully drive revenue in 2018 (“a year of building”), but will contribute more in 2019 and beyond. CEO Kim Blickenstaff said in Q&A that international could represent 10%-15% of company sales over time – that seems reasonable to us (and possibly conservative). Tandem will go direct in Canada, while other countries will launch via experienced distributors. Animas’ exit is really driving Tandem’s prioritization, and management emphasized it is not taking the focus off the US. Tandem has announced three distribution agreements so far:

Tandem is “confident” for a summer 2018 launch of the under-FDA-review t:slim X2 with Basal-IQ (predictive low glucose suspend) and Dexcom’s G5. In major new news, an update to add Dexcom’s G6 (under the new iCGM pathway) is expected to launch before the end of 2018. Tandem has already spoken to the FDA regarding the latter and has a plan in place to quickly update Basal.IQ to add G6. Wow – this is impressively fast execution following the late March clearance of G6 under the surprise lower-classification 510(k) iCGM pathway. It’s also quite impressive for Tandem, who only filed the G5 version in January – getting that version approved and then updating to G6 within the same calendar year would be remarkable. (G6 is expected to launch this quarter, 2Q18. We’ll hear more specific timing next week.) 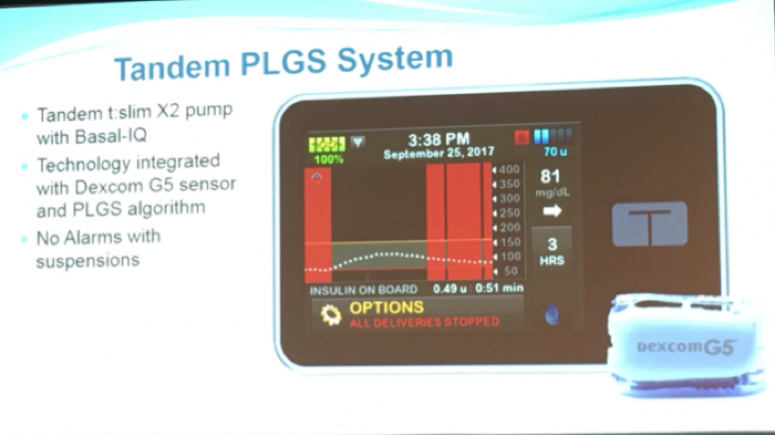 Tandem’s second-generation hybrid closed loop with TypeZero and Dexcom’s G6 (Control-IQ), is still expected to enter its pivotal trial (IDCL) in 2Q18, enabling a “rolling” (“modular”) FDA PMA submission in 2H18 and a US launch in 1H19. This timing is unchanged since 4Q17; we’ll be interested to see if the pivotal actually gets underway this quarter, as it has been quite delayed. On the plus side, the earlier-than-expected G6 clearance should certainly help. This system will also pursue iCGM compatibility, meaning other iCGMs could presumably be integrated over time. Mr. Blickenstaff emphasized Control.IQ will “leapfrog” the competition (670G) by adding automatic correction boluses for high blood sugars – we agree this is a compelling feature, especially when combined with a no-calibration sensor. We do not believe Insulet or Bigfoot plan to have automatic correction boluses; Beta Bionics and Lilly might, but we’re not positive.

Tandem has decided to discontinue the 480-unit :flex Insulin Pump, which features an industry-leading 480-unit insulin cartridge for people with greater insulin needs. Demand has simply been low: in 1Q18, for instance, Tandem shipped less than 100 t:flex pumps compared to more than 4,000 t:slim X2 pumps. Most quarters recently have not even mentioned t:flex. Management said ~3,000-4,000 have been sold to date, reflecting less than 5% of Tandem’s installed base. Current t:flex customers will remain fully supported, including manufacturing of t:flex cartridges and 24x7 customer support for the remaining time left in warranties. We think this is a prudent decision, particularly with stiffer competition coming from Insulet’s U500/U200 Omnipods with Lilly and BD’s Swatch pump.