As expected following its 1Q17 (F4Q17) update two weeks ago, Medtronic initiated the MiniMed 670G US launch today, starting with over 20,000 Priority Access Program participants (current 630G users). Orders to these customers will start shipping next week and continue to be fulfilled “over the next few months” into fall 2017. In parallel, Medtronic will now take new orders from other customers (e.g., 530G users, other pump companies’ customers) that want to get on the MiniMed 670G. It’s not clear when these systems will ship, though we might guess sometime in the fall.

This long-awaited  launch comes ~8 months following the earlier-than-expected September FDA approval of the world’s first hybrid closed loop. Medtronic has been very careful to proceed cautiously with this launch, given the need for careful hands-on training and expectations management.

The Guardian Sensor 3 reported an MARD of 10.6% vs. fingersticks in the Customer Training Phase, right in line with the labeled MARD of 10.6% vs. YSI (two calibrations per day at minimum, though 3-4 are recommended). The press release repeatedly emphasizes that the new Guardian Sensor 3 is more accurate and “the only continuous glucose monitor trusted and approved by the FDA to power a hybrid closed loop system.” This is a clear note to: (i) potential users worried about Medtronic’s CGM accuracy; and (ii) a competitive nod to Dexcom’s G5 marketing as the only CGM FDA approved for non-adjunctive use. As a reminder, Guardian Sensor 3 is approved for adjunctive use (e.g., a confirmatory fingerstick is needed for a bolus), even though the pump can modulate basal insulin delivery automatically (within bounds) based on CGM values. The sensor will be a major focus of Medtronic’s exhibit hall booth, including a virtual reality demonstration.

As noted two weeks ago, the MiniMed 670G marketing places a big focus on less diabetes burden and spending more time-in-range. Medtronic is still using similar language as we heard after the September FDA approval – “hybrid closed loop” and “automated delivery of basal insulin” – though the tone is noticeably more excited and emphatic about less diabetes burden. As the launch expands beyond early adopters jumping to get on the system, we wonder if this broader group will have similar experiences as customer training phase users.

Perhaps the biggest question of all is whether the 670G – and upcoming products like it – will expand the pump and CGM markets. How many patients in each of these groups will make the leap to get on hybrid closed loop devices:

We can’t wait to see how this plays out and how different competitive closed-loop products stack up (see our landscape here). MDI dosing decision support is also fast coming market via connected pens combined with CGM and titration software (see our landscape here). How will the market segment and what products will provide the best outcomes:cost ratio for payers and the best benefit:hassle ratio for patients and HCPs? 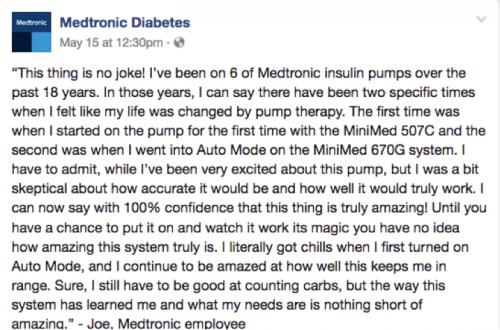 Q: When will the 670G ship to non-priority access program participants?

Q: To what extent is the MiniMed 670G/Guardian Sensor 3 a threat to other pump players (Animas, Tandem, Roche, Insulet), Dexcom, and Abbott?

Q: Who will be second-to-market in the US with a hybrid closed loop? (See our competitive landscape here.)

Q: Will the MiniMed 670G and other closed-loop devices expand the pump and CGM markets? Where will penetration be in five years?