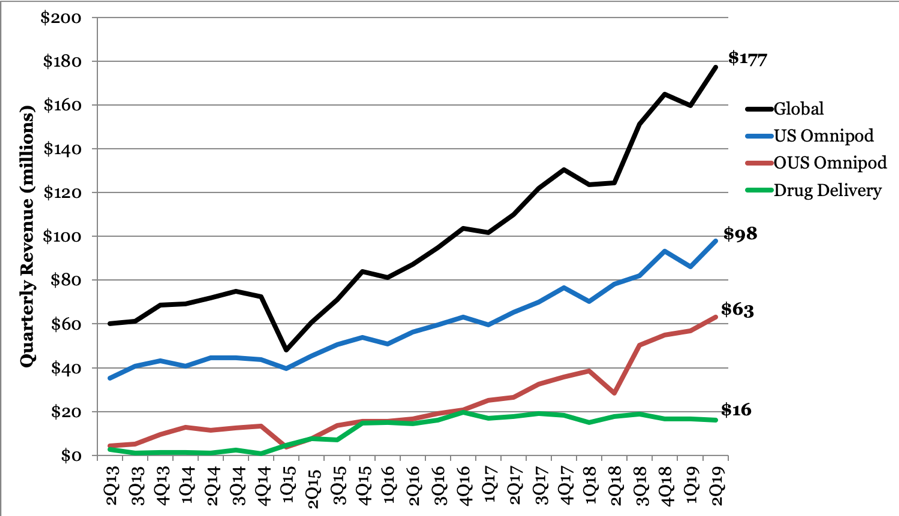 Insulet reported record global revenue of $177 million, rising 43% YOY on an easy comparison to 13% growth in 2Q18. Sequentially, revenue rose a strong 11% from $160 million in 1Q19. Sales surpassed the record $165 million set in 4Q18 – quite impressive for Insulet to beat a fourth quarter this early in the year. 2Q19 sales blasted ~$15 million past the expectation for $160-$165 million in sales, driven mostly by higher-than-expected US Omnipod revenue ($8 million over guidance) with a meaningful contribution from OUS Omnipod (~$5 million over guidance). From a growth perspective, OUS Omnipod sales still drove nearly two-thirds of 2Q19 company growth, benefitting from: (i) the fourth quarter with a pricing lift after going direct in Europe in mid-2018 (i.e., this benefit has now anniversaried); and (ii) a very easy YOY comparison to 2Q18 OUS (see below). In sum, Omnipod is firing on all cylinders globally, and we’d expect a strong 2H19. Insulet also continues to expand the pump market, with “approximately 80%” of new Omnipod users converting from MDI – similar to 1Q19 and well ahead of Tandem’s “approximately half.”

For the fourth straight quarter, Insulet reported positive net income, even with sizeable investments in US manufacturing. Net income was $1.4 million in 2Q19, compared to a net loss of $1.7 million in 2Q18, but down from $4.4 million in 1Q19 and $9.9 million in 4Q18. Gross margin was 66% for the quarter, pretty flat from 67% in 1Q19 and even with 2Q18. This small sequential decline in gross margin was expected, given the impact of Insulet’s investment in a new highly automated US manufacturing line. Insulet ended 2Q19 with $372 million in cash, down slightly from $393 million in 1Q19. The business is generating positive operational cash flow.

4. Production Begins on First US Automated Manufacturing Line; Second Line to be Installed Later This year

Production has begun at Insulet’s new highly-automated US manufacturing line in Acton, MA – see a video here. The new production line is part of a $200+ million investment to move Insulet’s global headquarters to Acton, MA. The investment presents a headwind to short-term gross margin, but will generate huge gains in efficiency, costs, capacity, redundancy, and co-location with the innovation team. Installation of a second Omnipod manufacturing line is planned for 2H19 with production beginning in 2020. No time to rest given this growth! In 1Q19, we heard that this production line would be able to produce half the output of Insulet’s Chinese manufacturing operation with one-tenth the headcount! In preparation for the US manufacturing transition, Insulet has built up pod inventory to ensure a smooth transition.

Notably, coverage for Omnipod Dash was expanded to “approximately 50%” of all US covered lives, up from ~one-third in 1Q19 – that translates to an additional ~60 million covered lives in one quarter! As coverage builds over the year, Insulet will be able to transition more of the user base over to Dash and increase Dash uptake in new users. In addition, “greater than 50% of all Medicare lives” are now covered for Omnipod, up from “over one-third” in 1Q19 – wow! Medicaid coverage has also continued the upward trajectory, now at “approximately 60%” covered – up from “over half” in 1Q19. Insulet is making remarkable strides on access, and we’d guess the no-upfront-cost for pump therapy is highly appealing to payers vs. the competition.

1. Horizon on Track for Pivotal Start in 4Q19; 2H20 US Launch; Committed to Smartphone Control, Ease of Use for MDI, Pediatric Indication

A pivotal trial of the Omnipod Horizon hybrid closed loop is still expected to start in 4Q19, keeping it on track for a US launch in 2H20 – no change in timing for several quarters now. Between now and then, Insulet will “complete commercial development” of the product. Mr. Petrovic emphasized the three areas of focus for Horizon: (i) “breakthrough ease of use” – building a system that MDI users can transition to; (ii) personal smartphone control – “all market research indicates that’s a gamechanger”; and (iii) launching with a pediatric indication (presumably 2+ years). She emphasized the system’s highly differentiated “on-body-ecosystem” design, embedding the algorithm in the tubeless pod itself, talking directly to the Dexcom G6 CGM, and allowing users to remain in closed loop when the phone is out of range, when in the shower or water, etc. “This is a crucial differentiator from tubed pumps. The pod is always talking to the CGM. Our system architecture is designed for more time-in-loop and more time-in-range.” (What a catchy phrase, “time-in-loop”! We’d love to see “TIL” catch on as shorter version of “time spent in closed loop.”) Ms. Petrovic again reminded listeners that Horizon has an FDA breakthrough device designation, meaning Insulet has been in close contact with FDA and expects an “accelerated” review. We’ll be eager to see how long it takes the FDA to review Tandem’s Control-IQ; it was just submitted ahead of a planned 4Q19 launch. Control-IQ does not have a breakthrough designation, so it might represent an upper-end estimate of Horizon’s FDA review. Medtronic’s next-gen MiniMed 780G is currently in its pivotal, slated for a launch by ADA 2020 – ahead of Horizon. 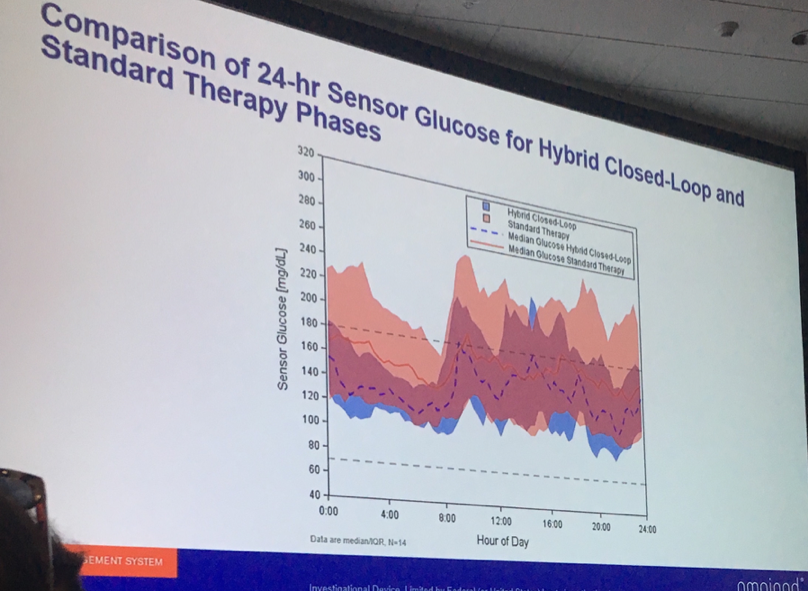 2. Tidepool Loop: “Additive To Horizon”; Plans for ACE Pump designation: “We fully expect our system to be interoperable”

Echoing 4Q18 and 1Q19, Ms. Petrovic reiterated support for Tidepool Loop, plans to eventually file for an ACE pump designation (timing unclear), and a clear focus on enabling interoperability and patient choice. Omnipod was added to the DIY version of Loop in April and has received positive anecdotal reviews and certainly expanded the number of DIY Loopers. As of ADA, Tidepool/Jaeb’s Loop observational study had 550 people actively sharing Loop data, with ~80% of the cohort of new Loopers in the study using an Omnipod. We conservatively estimated over 2,500 people were using the DIY Loop iPhone app globally, with either an Insulet or Medtronic pump. 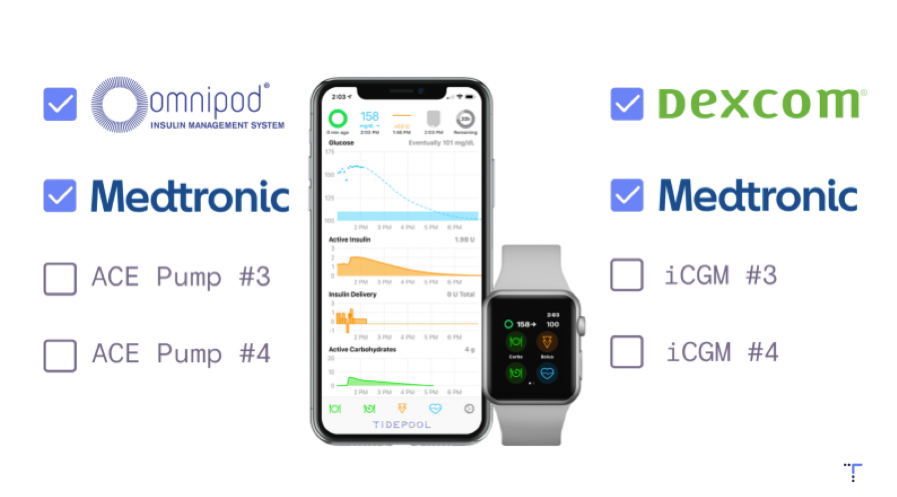 3. Lilly U500 Omnipod Submitted to FDA (“Niche” product); No Update on U200; Type 2 Opportunity is Already Accessible Today with Dash

In Q&A, Ms. Petrovic confirmed that the Lilly U500 Omnipod has been submitted to FDA – on par with 1Q19 and reiterating comments from ADA. No launch timing was given today, but January’s JPM talk expected a launch by the “end of 2019/early 2020.” Comments once again positioned this as a “niche” product that was “never intended to have a major contribution to revenue.” There was no update on the U200 Omnipod, which has “more potential” but is still going to be incremental to Insulet’s type 2 play. Said Ms. Petrovic: “Market research is showing us that concentrated insulin will be helpful, but it’s not required to see significant growth in the type 2 insulin-dependent patient population. With the pod’s ability to reduce total daily dose, and how appealing the product is – simplicity, discretion – we probably already have access to the majority of insulin-dependent type 2s. We’re making an effort today (with Dash), rather than waiting for concentrated insulin.” We’re glad to see Insulet pushing ahead into type 2, especially given how lengthy the drug-device development process has been for U500.