Latest example of the differing philosophies to DKA risk mitigation between EMA and FD; Farxiga has already been approved as an adjunct type 1 therapy in both Europe and Japan

1Q19 data from dQ&A showed that individuals with type 1 diabetes who use SGLT-2s off-label saw benefits to their A1c, general well-being, and ease of diabetes management

The result does not necessarily come as a surprise, as Sanofi/Lexicon similarly received a CRL from the FDA in response to their NDA for SGLT-1/2 dual inhibitor Zynquista (sotagliflozin) following a deadlocked 8-8 FDA Advisory Committee ruling in January. Zynquista’s CRL was ostensibly based on concern over DKA risk and, to our observation, dissatisfaction at the sponsors’ risk mitigation strategy. We would not be surprised if the FDA cited similar concerns with Farxiga, as DKA risk for SGLT inhibitors continues to be an extremely active point of conversation, and we have yet to hear AZ’s proposed risk mitigation and education plans – this is speculation.

In March, Farxiga was approved as an adjunct type 1 therapy in both Europe (5 mg) and Japan (5 mg with potential up-titration to 10 mg) under the name Forxiga. Approval of SGLTs in the United States, however, has proven more challenging near-term.

Notably, Europe’s Forxiga approval was restricted to individuals with a BMI ³27 kg/m2. The FDA seems to be taking a different approach and ruling the drug class to be too risky across the board, despite evidence that those with a BMI ³27 kg/m2 are significantly less at risk for DKA.

and other drugs across the diabetes and obesity landscape.

1Q19 data from diabetes market research group dQ&A showed that individuals with type 1 diabetes who use SGLT-2s off-label saw benefits to their A1c, general well-being, and ease of diabetes management. These individuals also saw decreases in their total daily insulin and fasting blood glucose. We anticipate that the incidence of off-label usage will only continue to grow and hope that companies and the FDA can move forward together as quickly as possible to prevent DKA while also affording the proven benefits of SGLT use. 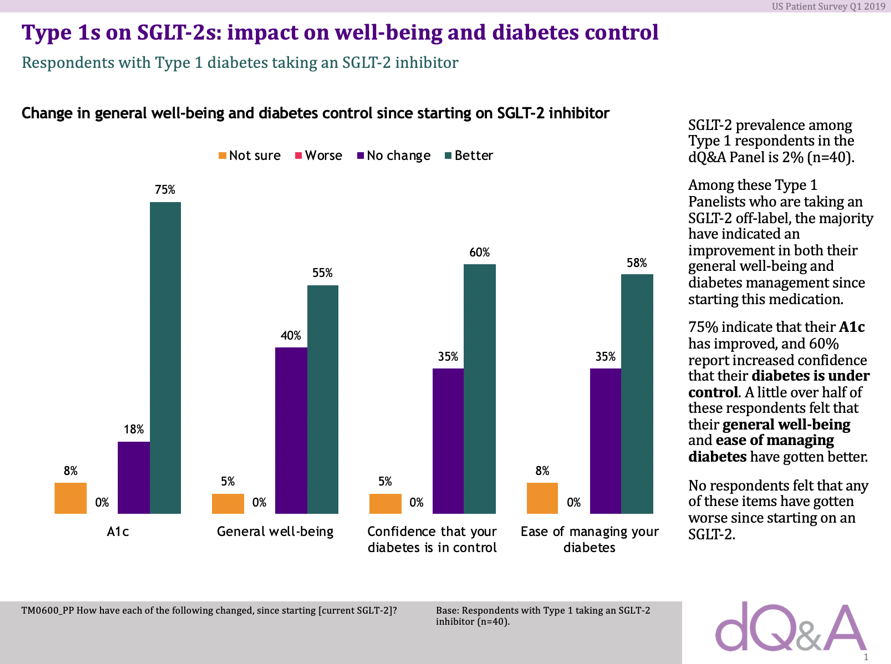 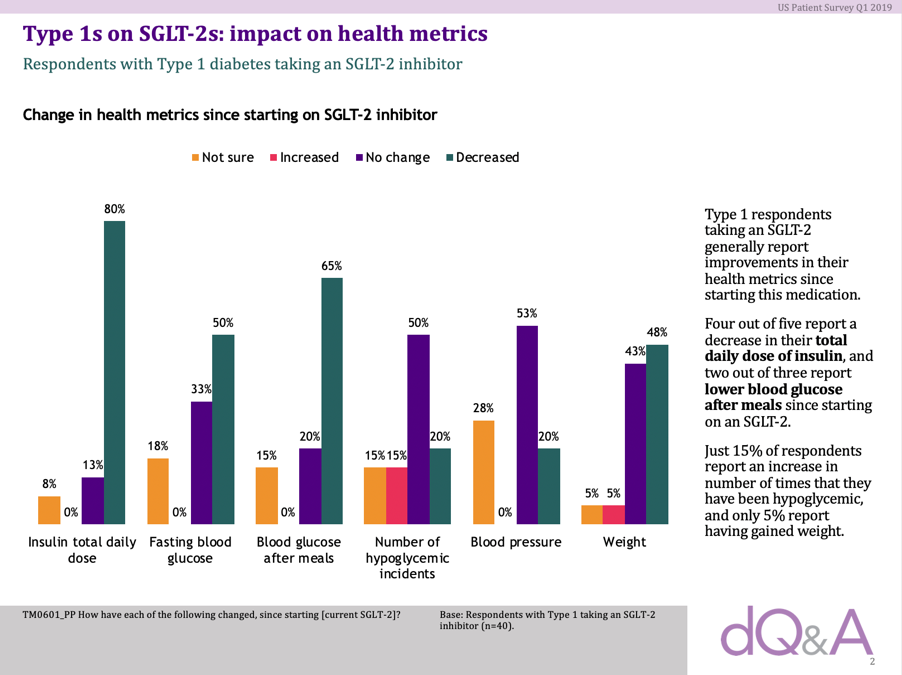 To learn more about these findings, please contact Richard Wood.

“It is my understanding that the US FDA has declined the approval of dapagliflozin as an adjunctive treatment of type 1 diabetes. In contrast, the EMA has approved use this drug for the same indication. I strongly believe that the EMA made the correct decision; whereas the decision by the FDA is misguided and presumably due to the so-called increased risk of diabetic ketoacidosis when an SGLT-2 inhibitor is used in combination with insulin in patients with type 1 diabetes. We have already studied this question, and our findings have demonstrated that use of an SGLT-2 inhibitor does not accelerate the rate of ketogenesis following interruption of basal insulin infusions in type 1 diabetes. Rather, the failure of patients to promptly recognize early metabolic decompensation relates to a blunted and much more gradual rise in blood glucose levels. In order to promptly recognize and abort early metabolic decompensation, type 1 diabetes patients treated with an SGLT-2 inhibitor need to be instructed to monitor blood beta hydroxy-butyrate levels regularly rather than to depend on marked increases in blood glucose levels to trigger concerns about DKA. Failure to properly educate patients to monitor blood beta hydroxy-butyrate levels regularly should not be a reason to deny availability of these drugs to other patients who are willing to measure ketone levels carefully.” -Dr. Bill Tamborlane (Yale, New Haven, CT)

"It is a strange timing for this negative response as exactly now NHS, the British health care system has introduced reimbursement of dapagliflozin in specific patients with T1D as adjunctive therapy. It is sad that US T1D patients cannot get access to this promising therapy. For the right patient, accompanied by the right medical team, this approach is very appealing" -Dr. Chantal Mathieu (KU Leuven, Leuven, Belgium)

"I am not quite so enthusiastic about the use of these agents in type 1 as some of my colleagues at present. They have great promise and if they show renal protection in type 1 diabetes we will have to find a way to use them.  But in clinical trials (where patients are treated to protocol) there were episodes of DKA and even a death.  If this treatment was rolled out and unsuitable people were started on the medication then there is a potential for more events which would bring the medication into disrepute.  So I would want to be more cautious as we roll this treatment out; clearly the FDA agrees." -Prof. Simon Heller (The University of Sheffield, Sheffield, UK)