It has been “imminent” since July, and now it’s official: The FDA has approved the Professional version of Abbott’s FreeStyle Libre, a long-time coming following the submission in 2Q15. The approval brings HCPs a dramatically better professional CGM in a less expensive package. And in major news, Abbott shared that the consumer, real-time version of FreeStyle Libre is under FDA review (submitted in 3Q16!). We’re excited about what this means for the future of diabetes technology in the US, which is still inaccessible for too many people with diabetes or too hard to use and prescribe. We see this announcement as very positive for the entire field and believe it will expand CGM use dramatically. See our top highlights from the announcement below, followed by our questions on what it means for the field.

1. Abbott announced that the FDA has finally approved FreeStyle Libre Pro, the retrospective (blinded), 14-day wear, factory calibrated sensor and HCP-owned reader device. The professional CGM will be made available to US healthcare professionals in the coming weeks (www.FreeStyleLibrePro.us). Pro is going to be a dramatic improvement for HCPs currently using professional CGM devices; those miffed by inconsistent and unreliable fingerstick data; and especially HCPs using A1c alone to guide care.

2. FreeStyle Libre Pro has outstanding pricing: each 14-day sensor will cost just $60 (fully disposable), while each HCP-owned reader device will cost only $65. Notably, a reader is compatible with multiple sensors, meaning a practice could own just one reader and have hundreds of patients running sensor sessions simultaneously. Wow! FreeStyle Libre Pro will be reimbursed under existing professional CGM codes. Patients will just have a co-pay to see their provider.

3. In major news, Abbott revealed that it filed the real-time version of FreeStyle Libre (consumer) with the FDA in 3Q16! Per the 2Q16 financial update (which occurred before submission), it could be approved as early as 1Q17. We wonder if the Agency’s longer-than-expected review for the Pro version was forward-looking – the FDA knew that it would have to review the consumer version, which has a lot of similarities. Will today’s approval speed up review of the real-time consumer version? We always remind ourselves how incredibly under-resourced the FDA is given all it is working on – kudos to them for making this happen, which has tremendously positive implications for public health in our view.

4. FreeStyle Libre Pro has been approved in India since early April 2015. Sales have never been disclosed, but providers from India in Abbott’s recent symposia have been major fans (including the legendary Dr. Viswanathan Mohan, who used Pro in over 1,000 patients in nine months).

5. We see Libre Pro as a critical companion diagnostic for titrating medications in type 2 diabetes; adjusting insulin in those not willing/able to wear a sensor 24/7/365; and as an ideal tool for use in clinical trials (going beyond A1c to hypoglycemia, time-in-range, variability).

7. FreeStyle Libre Pro has a number of benefits compared to the current professional CGM competition (Dexcom and Medtronic): less expensive, less HCP and patient time to train, easier startup and maintenance, longer wear, and far more scalable for HCPs. How will the professional CGM competitive landscape change in the coming years? To date, it has been very exciting to see Dexcom and Medtronic forge a path – this approval will expand the market dramatically if all goes right. (In a smart, perfect world, we would see public/private funding for the most underserved patients to wear this and funding for their HCPs to analyze the results and help individualize diabetes management.)

1. This morning, Abbott announced that the FDA has finally approved FreeStyle Libre Pro, the retrospective (blinded), 14-day wear, factory calibrated sensor and HCP-owned reader device. The professional CGM will be made available to US healthcare professionals in the coming weeks (www.FreeStyleLibrePro.us). As with traditional professional CGM (e.g., Medtronic’s iPro2), a healthcare provider owns FreeStyle Libre Pro and places the sensor on a patient in the office. The patient wears the sensor at home (in this case for 14 days) and doesn’t need to take any fingersticks or carry around a reader device (factory calibration is a big advantage relative to Medtronic and Dexcom for patients who will not use traditional SMBG). FreeStyle Libre Pro stores 14 days of data right on the fully disposable patch (one glucose data point every 15 minutes), after which the healthcare provider can download the data in a return office visit (as little as five seconds to download). Libre Pro collects data in a blinded fashion (no real-time readings are available), enabling unbiased capture of patients’ glycemic patterns. 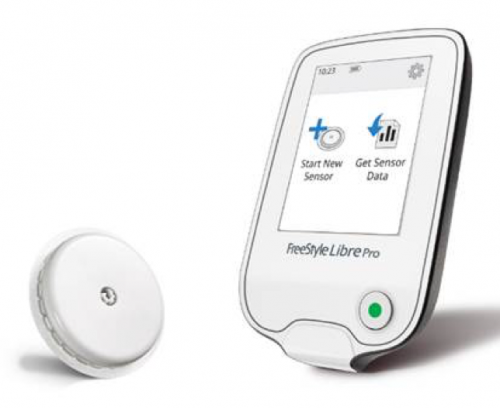 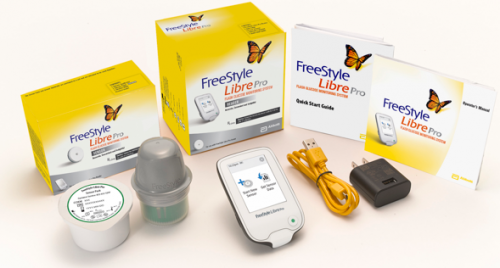 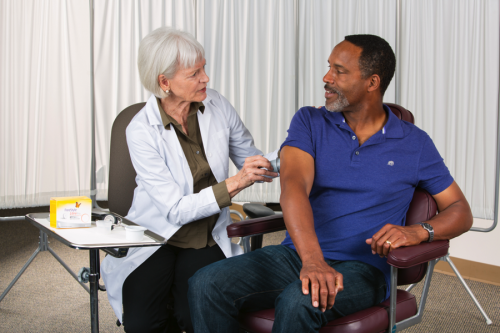 2. Abbott has outstanding pricing for FreeStyle Libre Pro: each 14-day sensor will cost just $60 (fully disposable), while each HCP-owned reader device will cost only $65. A reader is compatible with multiple sensors, meaning a practice could own just one reader and have hundreds of patients running sensor sessions simultaneously. Wow! This design makes the system “significantly less expensive” and far more usable for HCPs than current professional CGMs from Medtronic and Dexcom – both have expensive reusable transmitter and receiver/recorder devices and can only be used on one patient at a time. While the sensor costs among competitors is comparable, FreeStyle Libre Pro's sensor has a wear time of 14 days vs. competitors’ wear time of 6-7 days, meaning more data and a better sense of trends from Pro for a similar cost. Of course, for best use, it will be helpful for patients to watch what they are doing during this period – although for many patients, just the “first pass” of understanding when they have high and low blood glucose will be so valuable. We can imagine follow up uses when they track what they are eating, etc – this is more of a “hassle” for sure but the value has multiple levels depending on the degree to which patients and HCPs are engaged.

3. In big news, Abbott also revealed that it filed the real-time version of FreeStyle Libre (consumer) with the FDA in 3Q16! This was very upfront in the press release and we applaud the company for answering this openly. According to Abbott CEO Mr. Miles White in the company’s July financial update (which occurred before submission), the consumer version could be approved as early as 1Q17. At the time, given the uncertainty, we felt that this timing was extremely ambitious, but the approval of the professional version is very good news and makes 1Q17 seem possible.

4. FreeStyle Libre Pro has been approved in India since early April 2015. Sales have never been disclosed, but providers in Abbott’s recent symposia have been major fans. We heard glowing praise at ADA in June (Dr. KM Prasanna Kumar) and at IDF in December (the legendary Dr. Viswanathan Mohan). Dr. Mohan floored us with an estimate that he had already used the blinded 14-day sensor in ~1,000 patients in just nine months (at the time). He spoke in glowing terms about the pattern recognition in Abbott’s Ambulatory Glucose Profile, the value in optimizing patients’ therapy by helping providers feel more successful, and – most importantly – making the invisibility of diabetes more tangible to patients. It sounded like the device had been used far more often in type 2s, though Dr. Mohan suggested that the device holds value for anyone on insulin. Dr. Kumar also spoke positively on the value of Pro, reminding attendees that 89% of the Indian population has no insurance coverage. As a result, the average person with diabetes in India spends only ~$120 on diabetes medication and monitoring annually – enough, Dr. Kumar continued, to buy one SMBG per week, one venous blood test per three months, and one A1c test per six months. In this climate, he typically uses the Pro in his patients once every three months to calibrate and assess the prescribed treatment.

5. We see Libre Pro as a critical companion diagnostic for titrating medications in type 2 diabetes; adjusting insulin in those not willing/able to wear a sensor 24/7/365; and as an ideal tool for use in clinical trials. The factory calibration, 14-day wear, glucose data point every 15 minutes (including overnight), excellent form factor, blinded wear, no need to carry a receiver, and ability to start multiple sensors with one reader make Pro highly appealing for patients in any kind of trial ­­­(particularly drug trials)– post-insertion, there is no daily maintenance, but investigators get two weeks of in-depth glycemic information in the form of AGP. Patients could presumably even mail the used sensor in after two weeks. Libre Pro could help better characterize glycemic responses beyond A1c, particularly showing unbiased changes in hypoglycemia (especially overnight) – this will be key for differentiating new therapies that improve time-in-range but may not change A1c.

6. We also see high potential for Libre Pro to be used in new business models and novel diabetes care models. Will Abbott go this route? For instance, could Libre Pro sensors be placed in the pharmacy? Could sensors be placed in HCP offices but mailed back to Abbott for analysis? Could Abbott add a premium data analysis or coaching service on top of Libre Pro? The product is so easy to use that lower-level providers could insert and even analyze the data – we love the scalable potential and how it could really change diabetes care with better data.

7. FreeStyle Libre Pro is substantially better than the current competition (Dexcom and Medtronic) in professional CGM: less expensive, less HCP and patient hassle, easier startup and maintenance, longer wear, and far more scalable for HCPs. But how will the professional CGM competitive landscape change in the coming years?

Q: What does this approval mean for the FDA review of the real-time, consumer version of FreeStyle Libre? Will it be approved by 1Q17? Will it have an insulin-dosing claim? Will intermittent Libre Pro use drive uptake of the consumer version?

Q: Could professional CGM sales become as large one day as personal CGM? How long will that take?

Q: Which physicians will Abbott target in their marketing: PCPs or endocrinologists?

Q: How will different physicians deploy this technology in different patient populations? How will patients differ in Libre Pro wear frequency (e.g., 1 vs. 4 times per year)?

Q: How many providers are prescribing Libre Pro in India? How many patients have used it?

Q: Which factor will drive uptake of Libre Pro (and professional CGM in general) to a greater degree: cost, ease of use, analytics, etc.?