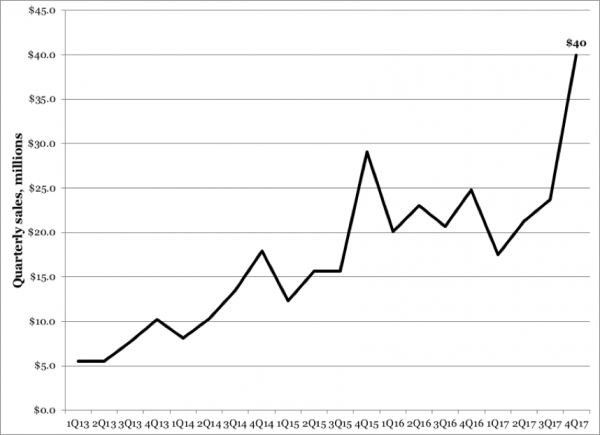 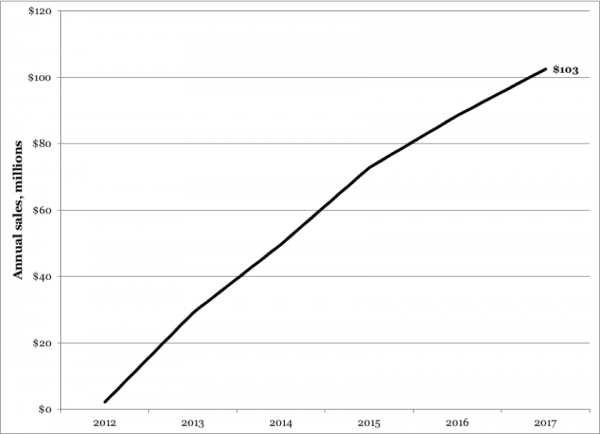 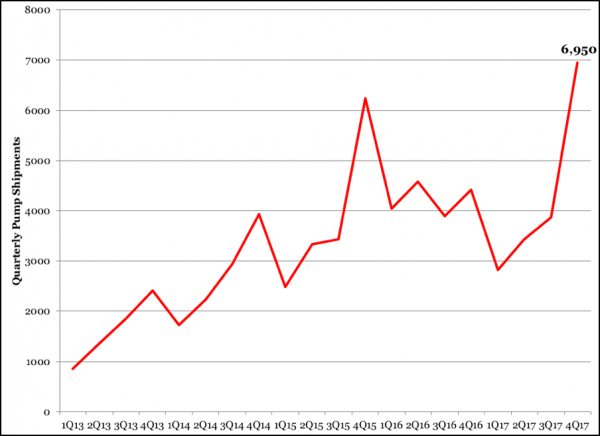 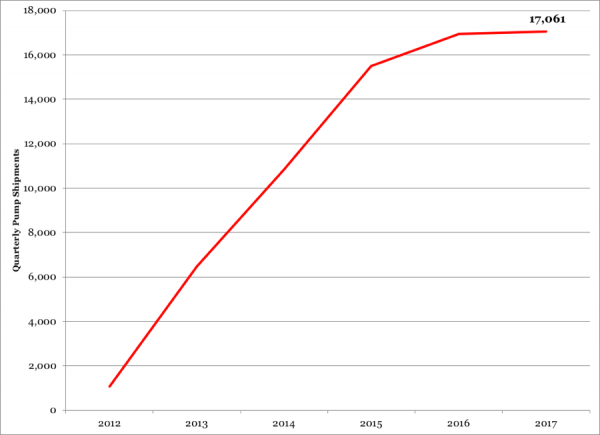 In a clear sign of confidence, management guided for 2018 sales of $132-$140 million, implying accelerated 26% YOY growth at the midpoint. In line with seasonal trends, 1Q18 sales are expected to be ~18%-19% of sales. This reflects some 1Q18 optimism over 2017, as only 17% of 2017 sales came in 1Q17. CFO Leigh Vosseller highlighted five key drivers: (i) launch of Basal-IQ this summer (currently under FDA review; see below); (ii) executing on renewals, with the goal of retaining 70% of existing customers (Tandem shipped 10,800 pumps in 2014, giving ~40% more renewal opportunities than the 6,472 available in 2017); (iii) capturing more revenue from infusion sets, given a full year of the t:lock connector; (iv) Animas’ exit from the market, providing incremental patient opportunities; and (v) international market entry in 2H18, starting in Canada.

Following a successful and better-than-expected $69 million fundraise in mid-February, Tandem believes it has enough financial resources to get to cash-flow breakeven in 2H19. The latter rests on two main assumptions: (i) Tandem has an installed base of at least 80,000 customers ordering supplies on a consistent basis; and (ii) gross margins get to 55%. The installed base number seems very doable, given the outstanding pipeline (see below), the current base of >60,000 customers, and ~15,000 new customers added in 2017. Gross margins stood at 43% in 4Q17 and 41% in 2017, meaning they need to rise notably on the higher volume of sales. Fortunately, Tandem’s gross margins are on a great trajectory: full-year 2017 gross margin was 41%, up from 28% in 2016; 4Q17 gross margin was 43%, up from 35% in 4Q16. If Tandem can do the same in 2017, it will be at nearly 50% starting 2019. Tandem also just doubled its manufacturing capacity (new facility) without increasing fixed costs, which will provide a big margin win as volumes expand. Indeed, CFO Leigh Vosseller was very confident: “Volume is now the biggest factor in improving gross margins.”

Tandem’s international plans were in line with the announcement last week – the t:slim X2 with Dexcom G5 integration has been submitted to Health Canada, with a launch expected in 2H18. A CE Mark is also expected in 1H18, with EU commercialization expected to start in 2H18. International sales are not expected to meaningfully drive revenue in 2018. Canada is clearly the priority, as Tandem can leverage its existing US infrastructure. EU commercialization will happen via distributors, and the first agreement has been signed with Rubin Medical for distribution in Sweden, Norway and Denmark. Rubin Medical will perform all sales, marketing, customer training, and support for Tandem’s products. There were no specifics offered on the EU launch or other agreements being discussed.

Tandem’s new CFO Leigh Vosseller took over on January 1. We thought she was confidence-inspiring and impressive in her first call, tackling every investor question with a mix of poise and data. She clearly knows the business well, now in her fifth year at Tandem. Ms. Vosseller previously served as SVP of Finance from August 2017, and joined Tandem in August 2013 as VP of Finance. Prior to Tandem, she served in various senior finance positions in the healthcare industry, most recently as VP/CFO of Genoptix, Inc. (a Novartis company). Tandem’s previous CFO John Cajigas retired as of December 31, having served ten years in the role. The December press release announcing the change noted, “Mr. Cajigas’ retirement is not related to any disagreement with, or inaccuracy or omission in, the Company's accounting systems or financial reporting”

In impressive execution, Tandem has already filed a PMA for FDA approval of the t:slim X2 with Basal-IQ (predictive low glucose suspend) and Dexcom’s G5. The company continues to anticipate a summer 2018 launch, with a free software upgrade for current users – the timing is exactly on par with the 3Q17 and ATTD updates. The FDA submission was previously pegged for “1Q18,” so this is on the earlier side of guidance. Indeed, we’d emphasize how quickly Tandem moved this product development ahead – feasibility data was presented at ADA last June; the pivotal trial began enrolling last August and wrapped earlier this year; we saw positive pivotal results at ATTD two weeks ago (pasted below), and the FDA submission is already in. We continue to see this as a low-risk regulatory path – it is safer and more effective than the MiniMed 530G’s low glucose suspend – and it will provide immediate benefit to Tandem users and add some automation to compete with Medtronic’s MiniMed 670G hybrid closed loop. (How users will choose between them remains to be seen, but certainly Basal-IQ is more competitive than the current no-automation X2 device.) The user experience (see below), especially no alarms for suspension, looks strong. Assuming it is approved and launched by mid-year, Basal-IQ will provide a nice boost to Tandem’s 2H18. Competition-wise, Basal-IQ will bring Tandem automation well ahead of Insulet, and give Tandem valuable experience commercializing AID before the bigger launch next year with TypeZero’s Control-IQ. One analyst asked about incorporating G6 into Basal-IQ, which remains an open regulatory questions. Given the quickly-following 1H19 launch of the TypeZero/Dexcom G6/t:slim X2 Control-IQ system (hybrid closed loop), we’d assume Basal-IQ will stick with G5. 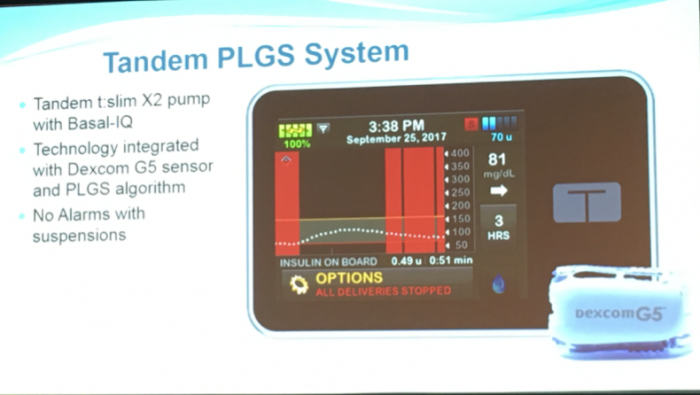 Tandem’s second-generation hybrid closed loop with TypeZero and Dexcom’s G6 (Control-IQ), will enter its pivotal trial (IDCL) in 2Q18, enabling a “rolling” (“modular”) FDA PMA submission in 2H18 and a US launch in 1H19. This pivotal timing is right on par with the 3Q17 update (“1H18”), but this is the first management has indicated plans for a “rolling” PMA submission – presumably this would allow the FDA to look at the submission in pieces, presumably prior to the pivotal data. This sounds like a great regulatory path, especially because FDA will just have reviewed (and likely approved) the t:slim X2 with Basal-IQ. At ATTD, Dr. Boris Kovatchev shared that the international closed loop (IDCL) pivotal trial testing this fully integrated system will enroll 150 participants, randomized 2:1 to closed loop vs. sensor-augmented pump. The main efficacy outcomes is time-in-range (70-180 mg/dl). As of a January update from Tandem, a smaller two-week, at-home study at seven sites was expected to start enrollment this quarter (1Q18), followed by the aforementioned pivotal trial starting in 2Q18. The overall timing is tight and execution will need to be strong, but the pieces seem to be coming into place and the timing is clearer than ever. It is a major win for Tandem that this pivotal study is NIH funded and the system is using TypeZero’s algorithm, which has been tested for over 14,500 days in over 450 clinical trial participants (30 clinical trials) at 15 research sites on four continents. Also in a win, the product will again allow for a software update at home, meaning t:slim X2 users (with or without Basal-IQ) won’t need a brand new pump – they’ll simply add Control-IQ with the Tandem Device updater. 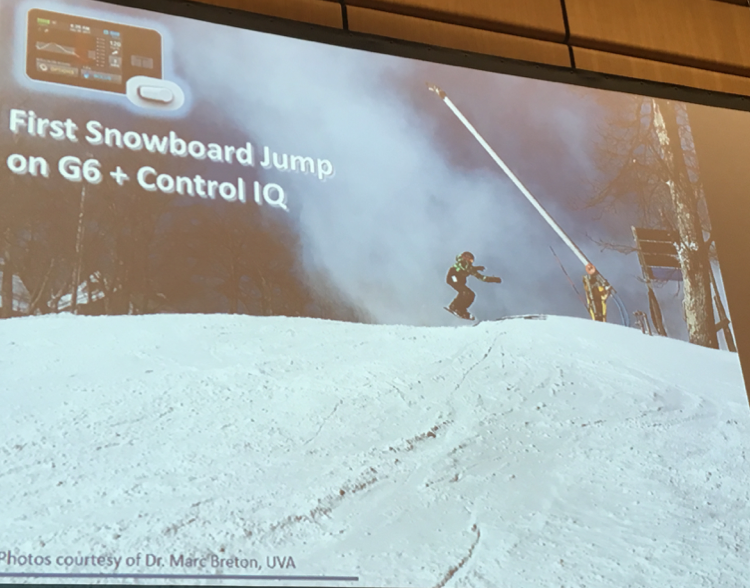 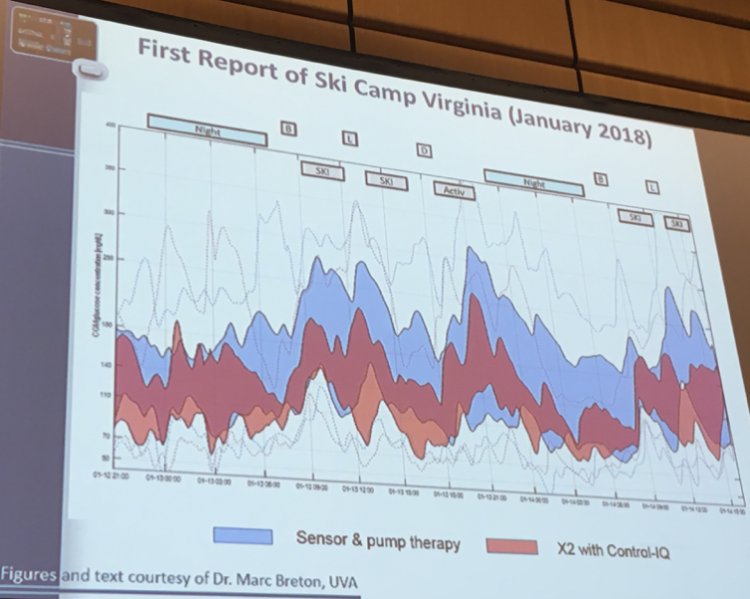 Tandem’s t:slim X2 mobile app is expected to launch in 2H18, the first update we’ve heard since Tandem’s ADA 2017 Media Day. Previously an end-of-2017 launch was hoped for, though presumably it was pushed back to wait for Basal-IQ to launch. The app will talk via Bluetooth to the X2 pump, wirelessly uploading data to t:connect, mirroring pump alerts, and integrating other information. In the future, there is obvious potential to control the pump, particularly for the t:sport product (see below). 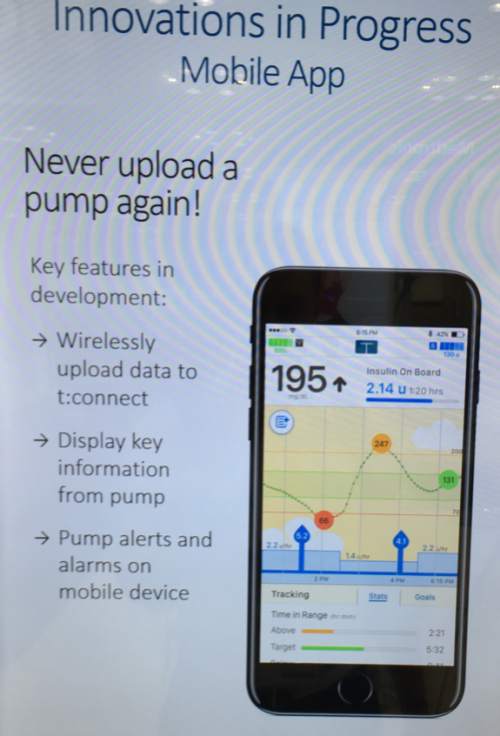 In the first development timeline ever, t:sport is moving ahead, Tandem’s patch pump concept with a short infusion set. Clinical trials are expected in 2019, with the goal of launching in the 2020-2021 time frame. The on-body component is about half the size of the current t:slim X2, and in new news, will integrate the Control-IQ hybrid closed loop algorithm (and presumably talk directly to Dexcom’s G6). Management shared plans today to use a low-cost 200-unit cartridge, include an on-pump bolus button (e.g., bolus through clothing), and maintain a rechargeable battery. A wireless handheld device or presumably a user’s own phone would control the pump. The product is in development for U100 insulin, but research will look into concentrated insulin – this would offer a more discreet alternative to the 480-unit t:flex (which has not sold very much) and help compete with Insulet’s Omnipod U200 and U500 devices with Lilly. Tandem is also exploring a slightly larger 300-unit cartridge for this device. This will be very interesting to follow, as it should offer competition to Insulet’s Omnipod Horizon and Roche’s Solo. On the other hand, the short infusion set means it’s not a true tubeless patch pump, leaving more pressure to excel on other aspects of the user experience. 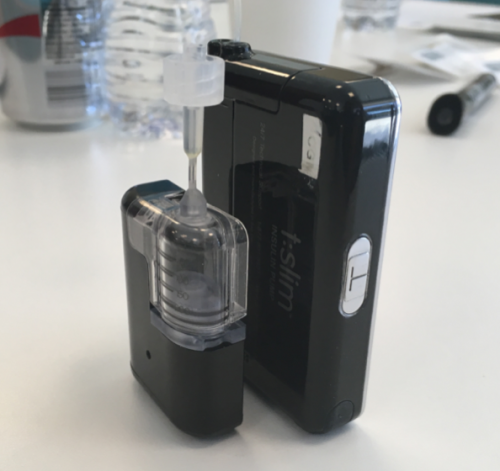