Senseonics 1Q18 – Revenue of $2.9M up 2% sequentially; “Optimistic” for “reveal” of Eversense at ADA; Plans to submit for iCGM classification via PMA supplement – May 11, 2018

The company finished the quarter with $61 million in cash and cash equivalents, increasing 67% from $37 million in 4Q17. The improved cash position was attributed to $52 million raised from convertible notes in January. Senseonics reported 1Q18 financial results today in a call led by CEO Dr. Tim Goodnow. Management was naturally buzzing with optimism following a unanimous positive FDA Advisory Committee vote in March in favor of the 90-day-wear Eversense CGM, on-body transmitter, and mobile app. Management seemed optimistic that it could be approved in time for ADA. We were also very excited to learn that Senseonics intends to submit a PMA supplement for iCGM classification following initial approval. Read on for our top highlights from the call.

Senseonics reported sales of $2.9 million, essentially flat (+2%) sequentially from $2.9 million in 4Q17. Year-over-year, sales nearly quintupled from an early base of ~$600,000 in 1Q17. Cash and cash equivalents totaled $61 million at the end of 1Q18, rising 67% sequentially from just $37 million at 2017’s end, thanks to $52 million raised from convertible notes in January. This extra cash will be key as Senseonics build a US commercial team ahead of the impending launch. Management attributed a higher net loss of $22.3 million (up from $16.3 million in 4Q17) to preparations for the US Eversense launch and a $4.8 million increase in the fair value of its liabilities. 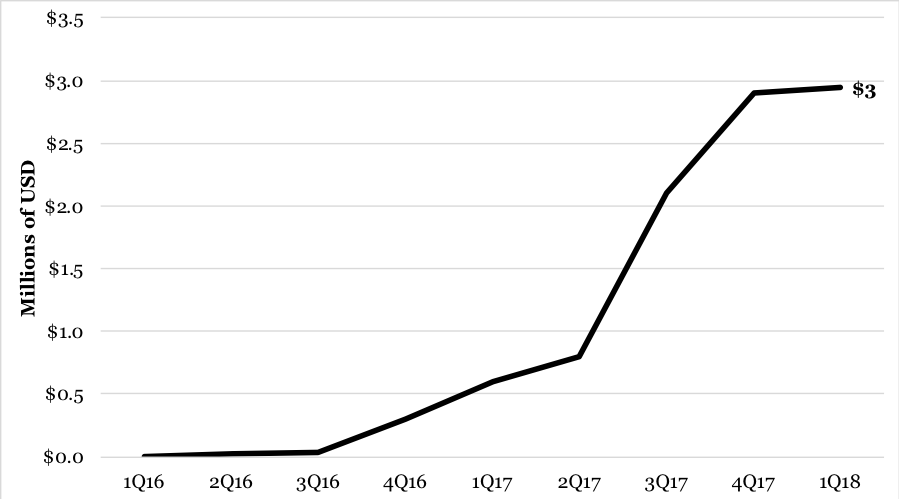 During prepared remarks, Dr. Goodnow remarked that sensor insertion rates rose sequentially by “nearly 40%.” This was a point of confusion in Q&A, but neither Dr. Goodnow nor VP Ms. Mirasol Panlilio offered a breakdown of new vs. existing (re-inserting) customers in Q&A. Ms. Panlilio said that the installed base growth rate wasn’t quite as high (as 40%), implying that re-insertions are still fairly common (we heard in 4Q17 that 77% of individuals had re-inserted following their first sensor). As of 4Q17, there were 2,000 Eversense users in 13 EU countries plus South Africa – Ms. Panlilio’s comment implies that there are somewhere between 2,000 and 2,800 Eversense users worldwide today.

3. Optimistic that Eversense Will be “Revealed” at ADA; Meetings with Major US Payers Ongoing; 14 Sales Reps in US to Double by EOY

Dr. Goodnow maintained that Senseonics is “on track” to support a US launch by mid-year. In fact, Mr. Gill noted he is “optimistic” that Eversense may be “revealed” at the ADA meeting in June: “Our intent is to be prepared for Eversense to be a headline at the conference. Potential events at the ADA in support of our product launch include presentations, specific exhibits, product theaters, initial HCP training, and lead generation.” “Comprehensive meetings” with major US payers are ongoing, and Mr. Gill remarked that he “continues to be pleased” by payer recognition regarding the value of Eversense. Indeed, he expressed confidence that current discussions are “paving the way” for Eversense reimbursement “as shortly as possible” through multiple channels.

Dr. Goodnow proudly highlighted the unanimous FDA Advisory Committee vote in favor of approving Senseonics’ Eversense 90-day CGM. He underscored the newest second-gen transmitter as “the only truly smart transmitter,” given it: (i) provides unique vibration alerts even when the phone is not nearby; (ii) can be removed without wasting the sensor; and (iii) can be worn with a gentle skin adhesive for comfortable long-term wear. He confidently claimed: “I truly believe Eversense will change how CGM will be used in the future.” He also noted the algorithm improvements enabling higher accuracy and hypoglycemia detection, and emphasized that Eversense has very strong accuracy relative to other CGMs (see picture below from the Ad Comm). Still, the most powerful component of the day, said Dr. Goodnow, was the “overwhelming passion, support, and validation” shared during the Open Public Hearing. To this end, Dr. Goodnow shared several testimonials from the OPH, underscoring the life-changing benefits of Eversense. VP of the US Region Mr. Mike Gill also referenced our testimonial on the current unmet need in CGM (see Adam Brown’s and Maeve Serino’s slides and talking points here and here). Mr. Gill also cited MGH’s Dr. Steven Russell, who commented that he has several patients waiting for Eversense, including those who have turned down currently-available CGM devices. As Mr. Gill stated, patients are “looking not for incremental changes, but exponential innovations like a sensor that lasts up to three months.” 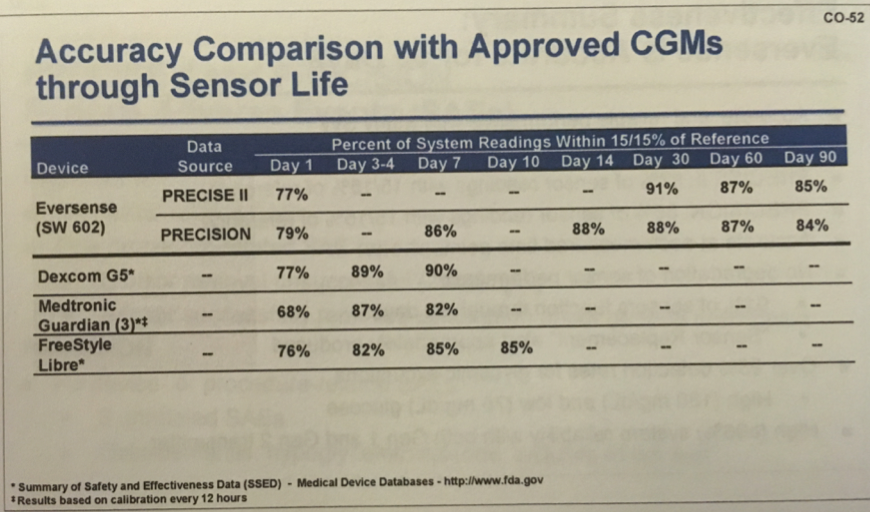 During prepared remarks, Dr. Goodnow declared Senseonics’ intent to submit a request for iCGM classification with the current, first-gen, 90-day Eversense system following initial FDA approval. Though the iCGM application will still follow the 510(k) pathway as established in the de novo decision for Dexcom’s G6, this decision clarifies the path that companies with previously PMA-approved sensors (Abbott, Medtronic) will follow to obtain an iCGM designation. It will be interesting to see if Senseonics gets this indication quickly! That Senseonics will pursue the reclassification to an iCGM is not surprising, since Eversense appears to meet the special controls (if PRECISE II and PRECISION studies are pooled) for accuracy. As a reminder, iCGM systems are down-regulated from a high-risk Class III (PMA) to a lower-risk class II devices (510(k) clearance). iCGMs are also approved with interoperability in mind, a big change that should enable faster iterative innovation, easier integration with pumps and software, and less regulatory burden for those that qualify.

The 180-day-wear Eversense XL is currently available in Sweden and the UK, with plans to achieve widespread availability in all 14 countries “this quarter.” Following the complete transition, the 90-day sensor will be retired (“sun-setted”) outside the US. Current efforts are focused on obtaining reimbursement, with a recent Stockholm hospital tender agreement serving as a major win in that department. Ms. Panlilio referenced “a lot of excitement” in Sweden and the UK for Eversense XL, underscoring that those in Sweden “want to convert immediately” upon learning of its availability. She briefly mentioned that Eversense XL is “starting next week” in a new market – given Dr. Goodnow’s reference to Italy as a “very attractive market” during the 4Q17 call, we might guess Italy is next. At ATTD, we learned that Eversense XL wouldn’t enter Germany until at least April, so it’s possible a German launch could also come soon.

There were no updates regarding the EU pivotal trial of the Roche-Senseonics-TypeZero 180-day hybrid closed loop system. Last we heard during the 4Q17 call, the study is slated to begin in 2H18. This timing is slightly delayed from DTM (1Q18). We weren’t able to find the trial on ClinicalTrials.gov. With Prof. Hans de Vries moving to Dr. Lutz Heinemann’s Profil Institute, we wonder if he will remain the PI on the study, or if someone else will take over the helm.