An article published recently in Diabetes Care reports major trends in the real-world use of different diabetes therapy classes in the US. Most notably, over the past decade (2005-2016), (i) metformin has become a more popular prescription for first-line therapy (growing from 60% to 77%), and (ii) there’s been a gradual diversification of second-line therapy prescriptions, away from sulfonylureas toward newer agents like DPP-4 inhibitors, GLP-1 agonists, and SGLT-2 inhibitors, though SUs remain the most commonly prescribed type 2 diabetes treatment after metformin.

The increase in metformin as first-line has come largely at the expense of TZDs, with prescription rates falling from 11% in 2005 to 1% in 2016. We imagine this was likely driven by the FDA black box warning for congestive heart failure on rosiglitazone and pioglitazone, as well as other safety concerns surrounding the TZD class such as bone fractures and bladder cancer. Metformin also seemed to replace some first-line sulfonylurea prescriptions between 2005-2016 (which fell from 20% to 8%) – we wish we could celebrate this, but very unfortunately, sulfonylureas continue to be a mainstay as second-line diabetes therapy (down from 60% to 46% by 2016, but still far more common as second-line treatment than DPP-4 agents at 20%, insulin at 17%, GLP-1 agonists or SGLT-2 inhibitors at 7% each, or TZDs at 4%). The SU class comes with an unfavorable side-effect profile of weight gain, hypoglycemia risk, beta cell burnout, and possible CV harm. Many thought leaders, including Dr. Jay Skyler, have expressed disdain for this drug class, and yet sulfonylureas remain in play due to their low cost (and the inescapable fact that cost determines care for the vast majority of people with diabetes). Moreover, though we are heartened to see the uptick in SGLT-2 and GLP-1 prescriptions (both <1% in 2005, when Byetta was just-approved and SGLT-2 inhibitors were nowhere near the market yet), we find their current second-line prescription share of 7% each to be quite low, given the very compelling clinical benefits they offer – more potent glucose-lowering, weight loss, low hypoglycemia risk, and possible renal and cardioprotection.

In light of this and the well-deserved clinical enthusiasm surrounding these newer agents, we were saddened to learn that only 4% and 7% of patients in the study had ever been prescribed an SGLT-2 inhibitor or a GLP-1 agonist, respectively, at any point in their diabetes care. This pales in comparison to overall rates of prescription for other major diabetes therapies such as metformin (79%), SUs (35%), insulin (26%), DPP-4 inhibitors (18%), and TZDs (11%). That said, in the past 12 months, two advanced diabetes drugs have received new CV indications from the FDA – Lilly/BI’s SGLT-2 Jardiance and Novo Nordisk’s GLP-1 Victoza – and J&J has filed an sNDA to make Invokana the third amidst these ranks. The ADA recommends Jardiance or Victoza for people with type 2 diabetes at high CV risk in its 2017 Standards of Care. All this is to say – perhaps there is hope for accelerated uptake of these advanced therapy classes in the years ahead (the present data only goes through 2016, before these label updates/new ADA guidelines), especially since we know how much real-world HCPs rely on treatment algorithms and product labels to inform their practice. 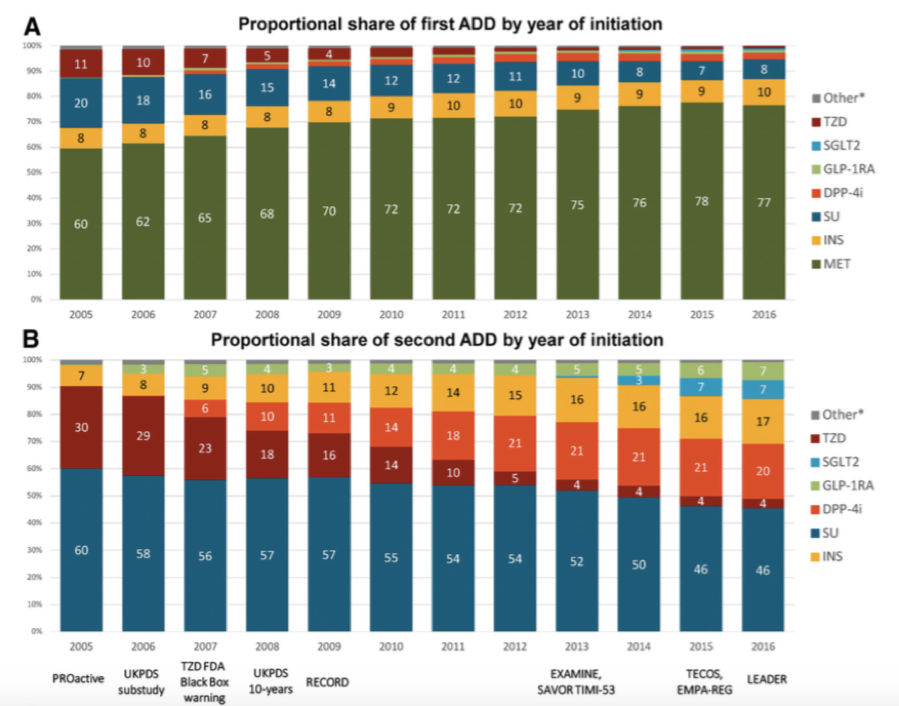