The FDA has released briefing documents for this Thursday’s Advisory Committee for Senseonics’s Eversense 90-day implantable CGM, on-body transmitter, and mobile app. We include links to the documents immediately below, followed by highlights related to the voting questions, panelists, FDA concerns, new data and studies, product details, and questions.

**There were also a number of Senseonics-generated materials – some of which we used to inform our analysis below – but they have since been taken down.

Advisory committees are always tough to call, but we’d expect a positive vote on Thursday, given: (i) the voting panel’s diabetes experience; (ii) strong panel overlap with the positive Dexcom G5 non-adjunctive meeting; (iii) Eversense’s strong accuracy and safety data (both in trials and overseas); and (iv) the conservative submission for 90-day wear, adjunctive labeling, and two calibrations per day.

As a reminder, the Eversense system was filed with the 55% smaller, water resistant transmitter; direct-to-phone (receiverless) communication; an updated, improved algorithm not tested in the US pivotal study; and two minor changes to product design (sensor end cap and insertion tool). Given that the forward-thinking FDA has recently approved a receiver-less CGM (Medtronic’s Guardian Connect) and changed the entire establishment of CGM regulation by authorizing Dexcom’s factory-calibrated G6 for marketing today as an “integrated CGM” down-classified to 510(k), we don’t believe Senseonics’s changes will represent huge impediments.

1. Panel Will be Asked to Vote on Safety, Effectiveness, and Benefit:Risk

The questions asked of the panel are identical to those asked at the Advisory Panel meeting regarding a non-adjunctive claim for Dexcom’s G5 CGM: Is Eversense safe, effective, and do the benefits outweigh the potential risks (see exact wording below). Specifically, the briefing docs suggest that FDA seeks input on accuracy in the early wear period (i.e., <14 days following implant), the amount of accuracy data available compared to the total sensor lifetime, and whether the design changes made post-clinical evaluation have been adequately validated. See highlight three for our thoughts.

1. Is there reasonable assurance that the Senseonics Eversense Continuous Glucose Monitoring System is safe for the proposed indications for use?

2. Is there reasonable assurance that the Senseonics Eversense Continuous Glucose Monitoring System is effective for the proposed indications for use?

The panel is very enriched with diabetes experience and CGM advocates, which we assume will work in Senseonics’ favor. Drs. Andrew Bremer (the Chair), George Grunberger, and Kathleen Wynn are all steeped in diabetes technology and/or the beyond-A1c movement – they will likely welcome the opportunity to expand CGM uptake with a new, accurate product that boasts a very differentiated form factor. CDC Diabetes Branch Chief of Epidemiology and Statistics, Dr. Edward Gregg, is another well-known panelist. Notably, all five panelists were also members of the Advisory Panel for the Dexcom G5 non-adjunctive claim, and all voted “yes” across the board on what we would argue was a tougher decision – removing CGM’s training wheels (BGM confirmation) was a much bigger step, in our view, than approving an implantable device that has been shown to sense glucose safely and with excellent accuracy. Particularly favorable is that Chair Dr. Bremer and his NIH team have already supported an AID project involving the 180-day Senseonics CGM system (through the EU arm of the the NIH-funded IDCL study). We expect the panel will ask tough questions, but ultimately vote that Eversense is safe, effective, and has a compelling benefit:risk tradeoff.

The executive summary suggests that FDA would like the following four main concerns addressed: (i) post-insertion accuracy (<14 days); (ii) the relatively low percentage of reference accuracy comparisons given 90-day wear; (iii) the system’s novelty from other CGMs; and (iv) four major design changes made to the system following the US clinical studies. We’re fairly optimistic and consider these to be tame concerns for an FDA panel meeting, but panel discussions are always impossible to call. 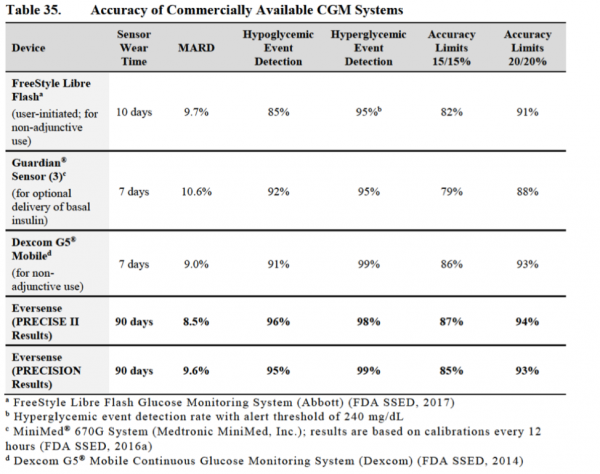 Eversense accuracy and safety have been demonstrated in both clinical and real-world settings with the PRECISE II US pivotal study, the PRECISE 180-day EU pivotal study, a real-world European registry, and a supplemental PRECISION study (which was published for the first time, to our knowledge, in these supporting documents). The Sponsor Executive Summary document also included an integrated safety analysis using pooled data from all three clinical studies, finding severe adverse event incidence to be just 0.5%. Senseonics has proposed post-market study to collect effectiveness and safety data in the US and intends to use time-in-range as the primary effectiveness endpoint. Read on for our key takeaways from the studies.

Since PRECISE II (the US pivotal) only compared Eversense accuracy to YSI on days 1, 30, 60, and 90, there were questions about sensor accuracy within the first 14 days after device startup; Senseonics conducted a supplemental study (PRECISION) that demonstrated strong accuracy on days 1, 7, and 14 (MARD 11.6%, 9.8%, and 9.0% vs. YSI, respectively). Adults (n=35) with type 1 or 2 diabetes (70% type 1) were inserted with Eversense sensors at three US sites by healthcare providers who had previous experience with the system. Eight patients received one sensor and the remaining 27 received two sensors, one in each arm. An overall MARD of 9.6% vs. YSI was achieved based on 15,170 matched pair readings. 85% of sensor readings were within 15 mg/dl for reference values £80 mg/dl or within 15% for reference values >80 mg/dl. Importantly, accuracy met clinically acceptable standards starting on day one, with 79% of sensor readings falling within 15 mg/dl or 15%. MARD vs. YSI on day one was 11.6% and improved substantially by day seven to 9.8% and to 9.0% by day 14. Similarly, the percentage of readings within 15 mg/dl or 15% also improved to 86% by day seven. The lowest MARD (8.7%) was recorded on day 60, with a slight increase to 9.7% recorded on day 90. We believe these data will be very compelling for Advisory Panel members, who will be asked to give their take on Eversense’s accuracy in early use. As noted above, these accuracy data are on par with non-adjunctive CGM, and Senseonics is going for a more conservative label. 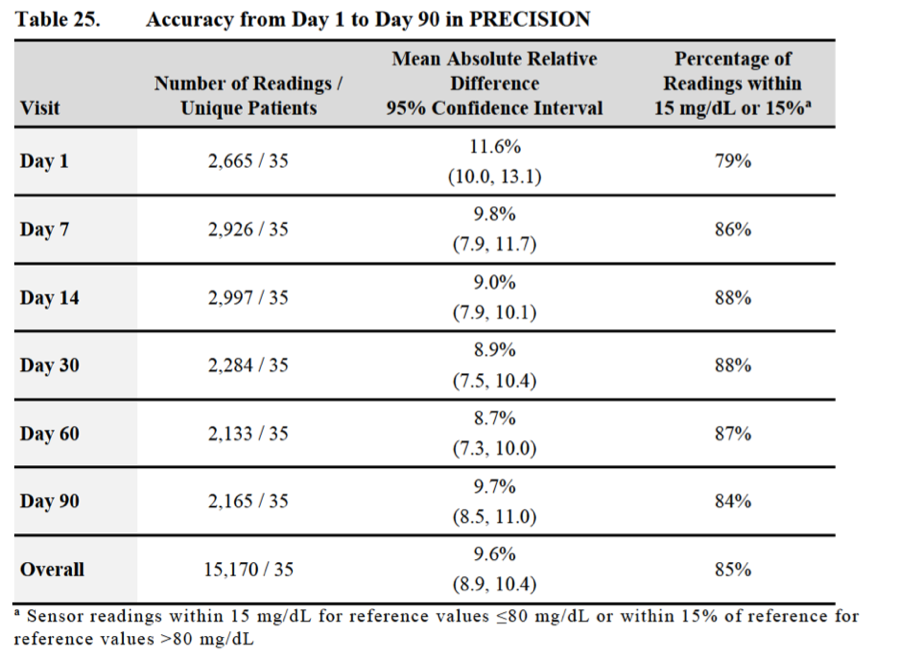 An integrated analysis using pooled data from all three clinical trials of Eversense (PRECISE II, PRECISION, and PRECISE) is the broadest review of all safety data collected to date, with over 22,500 patient-days of sensor exposure. The incidence of device- or insertion/removal procedure-related severe adverse events in the integrated analysis was a miniscule 0.5% (one out of 206 patients). The one serious adverse event occurred in PRECISE II when a surgeon put a patient under general anesthesia as opposed to the prescribed local lidocaine application (per CMO Dr. Lynne Kelley at ATTD) – this should be addressable through education and still represents quite a low rate. There were a total of 41 device or insertion/removal-related adverse events in 26 patients, translating to an incidence rate of 12.6%. All were transient and none were found to be medically serious.

6. Real-World Data from European Registry (n=1,686) Finds No SAEs with Eversense; 151 Have Discontinued Use (85 After 1st Removal Due to Reimbursement Issues)

As of February 2, 2018, 1,686 patients have enrolled in Senseonics’s European patient registry at 350 sites across 14 countries, receiving a total of 2,386 sensor insertions under real-world conditions. Most are still on their first sensor, and reimbursement has been the biggest barrier to continued use, so far. To date, there haven’t been any concerning safety signals or risks associated with long-term use in the registry.

The Sponsor Executive Summary included plans for a US post-approval study collecting data on repeat sensor insertions over two years in 175 patients, comprising 350 patient-years. The primary effectiveness endpoint will be time-in-range (70-180 mg/dl) at 12 months compared to the first month post-first sensor insertion – nice! The primary safety endpoint will be the rate of device- and insertion/removal-related severe adverse events during the 12 months post-first sensor insertion, with the aim to be no greater than 7%. The study also plans to assess the effectiveness of physician training, patient-reported outcomes, and overall rate of adverse events over two years.

Future Questions for Senseonics, FDA, Payers, and the Market to Consider

Q: How will Eversense be priced relative to the competition? On the 4Q17 call, CEO Dr. Goodnow suggested that US pricing will remain “very close to where the market [for full featured CGMs] is,” which he estimates to be ~$10 per day.

Q: How strong will reimbursement be in the US out of the gates? Overseas, coverage drop-off was cited as a driver of attrition, though conversations with major US payers have reportedly been “fairly robust and good,” as they particularly recognize Eversense’s potential to boost adherence. VP of the US region Mr. Mike Gill expects that the “vast majority of covered lives” will have payer coverage over the next couple of years.

Q: Will Eversense primarily steal share or expand the market? Thus far in Europe, 20%-25% of customers have been new to CGM, meaning most new customers are former Abbott, Dexcom, or Medtronic users. In 2Q17, 50% of Eversense users were previously on Libre. We are hopeful that this system, which may overcome barriers to device uptake and with a unique form factor, will expand the market.

Q: Could Senseonics pivot to a class II pathway and receive marketing permission for an “integrated” Eversense CGM, similar to Dexcom’s G6? How far is the sensor from meeting FDA’s new “special controls” announced with the G6 clearance?

Q: When will we see a 180-day Eversense XL submission in the US? A clinical trial with XL will begin enrolling in the US this summer. Might a gen two sensor lasting a full year leapfrog XL in the US?

Q: When will Senseonics pursue a pediatric indication? A Canadian study with 30 pediatrics has wrapped up and may be presented in full at ADA. At ATTD, longevity data and consensus error grid analysis both looked solid.

Q: When will Eversense Now be filed in the US? How much of a difference-maker will this be for the pediatric population?

Q: One-calibration data is solid – 9.5% MARD in the US 90-day pivotal – will Senseonics pursue this indication? Or will it wait for factory calibration in a second-gen sensor (management has commented on this project publicly since May 2017)?

Q: When will Senseonics pursue a non-adjunctive (insulin-dosing) claim? In early 2017, management said it hopes for a non-adjunctive label claim soon after approval and that it has partnered with UVA to generate simulation data.