In this piece, we assess the state of the diabetes/obesity fields going into 2018. We look back on 2017 in diabetes therapy, diabetes technology, big picture topics, and obesity to note scientific strides and surprises, to celebrate progress and take stock of remaining challenges, and to identify pressing questions for the year ahead. Within each section, you’ll find major themes, a list of highly-read reports (top 10 for the year!), what we got right/expected, what we got wrong/didn’t expect, key questions for 2018, and updates on what’s coming in 2018.

By and large, this Reflections piece is our favorite to write all year – and that’s up against the 945 other reports we’ve published since January 1, 2017! (If you’re interested, this “2017” filtered search on the CC Knowledge Base will let you scroll through every report we published this year.)

It’s an exciting time for the field, and for the first time in quite a long time, we sense real optimism as science advances, business/reimbursement models evolve, and diabetes care becomes more holistic – How do we think beyond glucose? How do we make patients’ lives easier in big and small ways? How can we rethink traditional drug delivery, care delivery, business models, and incentives? What new data streams can unlock significant value, enhance patient safety, make providers’ lives easier, and make care more continuous? This year saw progress and announcements on all those fronts.

We owe a lot of this optimism to CVOTs, which have identified diabetes therapies that make a difference on meaningful hard outcomes, not just A1c. This year, CANVAS showed cardioprotection for a second SGLT-2 inhibitor (Invokana) and DEVOTE revealed a significant hypoglycemia benefit with a newer basal insulin (Tresiba). These clinical findings are actually making their way into patient care: FDA added a CV indication to the Victoza label in August, J&J has filed for Invokana’s CV indication (decision expected late next year), and in 1Q18, FDA could add a hypoglycemia claim to the Tresiba label. This last move would be revolutionary, hopefully setting a precedent wherein FDA acknowledges hypoglycemia as a valuable beyond-A1c outcome.

Powering the future of beyond-A1c outcomes will be continuous glucose data, which also had a pivotal year. This once-nascent technology has matured to a point of national reimbursement in several countries (Australia, France, Germany, UK, Japan), avoiding fingersticks entirely (FreeStyle Libre), reaching people of a wider variety of ages and therapies (G5 Medicare, MDI users), improving very costly outcomes (CONCEPTT, Belgium data), and finding its way onto major smartphones and now smartwatches (iOS, Android, Apple Watch, Fitbit). The data from connected, constantly-streaming CGM – as well as BGM, smart pens, and pumps – will power a revolution in how patients and healthcare providers manage diabetes, especially for those on intensive insulin therapy. There is now an avalanche of momentum to gather data where we haven’t had it – How much insulin are people taking, and how much should they be taking based on their patterns and habits? It’s worth noting how quickly these ideas have taken hold and how fast it has moved. In our 2012 Reflections piece, the top five tech stories of the year were the launch of Dexcom’s G4, Insulet’s second-gen Omnipod cleared by FDA, launch of Tandem’s original t:slim, FDA submission of Medtronic’s MiniMed 530G (Veo), and FDA’s final guidance on the artificial pancreas. Whoa – not a single device with connectivity, and not a single mention in that report of “Smart pens” or injection titration. This year, we saw the first hybrid closed loop system come on the US market (MiniMed 670G), 20+ companies working to build smart pens and/or insulin titration, and a whole new era of remote coaching driven by connected devices.

But with this optimism comes the same slew of challenges we’ve seen in our 2016, 2015, 2014, 2013, and 2012 Reflections pieces: Access/affordability remains a major roadblock in getting advanced diabetes drugs and devices into patient hands. This is something we must address alongside the scientific advances, the industry developments, and the regulatory progress – if patients cannot pay for advances therapies, they won’t make a bit of difference. With all the remarkable data showing cardioprotection, renal protection, glucose-lowering, and weight loss from GLP-1 agonists and SGLT-2 inhibitors, why do these advanced therapies account for only ~14% of second-line diabetes prescriptions in the US? CGM, for all its benefits, still reaches a small minority of people with type 1 diabetes at the very best US centers (~24% penetration in the T1D Exchange).

The field must improve reimbursement for these safer, more effective drugs and devices, and to this end we need a compelling evidence base for short- and long-term cost-savings. Industry has started to come forward with pricing transparency reports, and we’re noticing early signs of a pricing evolution: Novo Nordisk has priced Fiasp on par with NovoLog, for example, and Merck/Pfizer has priced Steglatro much lower than existing SGLT-2 options; notably, the combination SGLT-2/DPP-4 Steglujan has a list price that is actually on par with standalone Jardiance. As well, Abbott’s FreeStyle Libre came to the US with very strong pharmacy pricing, studies of CGM are showing benefits on very costly outcomes, and next-gen CGMs (e.g., Dexcom/Verily) have a design mandate to be less costly. Will this focus trickle down to patients? Some of it already has (see Merck/Pfizer’s Steglujan and Novo Nordisk’s Fiasp) and we believe there is progress on manufacturing leaders working with various stakehoders. Other questions include how can  enhance transparency around PBMs, and also ensure that formularies don’t restrict patient choice? These questions are now inescapable, and the answers will be critical for new products to make a meaningful dent in the ever-growing diabetes epidemic – now 425 million globally as of IDF’s 2017 Atlas.

Here’s to a 2018 that sees tremendous gains in access, alongside continued advances in therapies and technologies.

A Call for Standardization of CVOT Design

DEVOTE Leads to Hypoglycemia Claim for Basal Insulin Tresiba – Precedent-Setting in the Regulatory World, a Key Contribution to the Beyond-A1c Movement

A Disappointing Year for Type 1 Cures and Prevention; Does this Signal a Shift of Investment Toward Closed Loop?

The list below covers late-stage pipeline products with expected milestones in 2018. We acknowledge that this list may not be 100% complete, though we’ve tried to be as comprehensive as possible based on the most recent public updates. If you notice anything missing, please write us.

US CGM Competition Heating Up On Products and Distribution – What Will The Market Look Like In 2018? Who Has the Edge On Different Features? 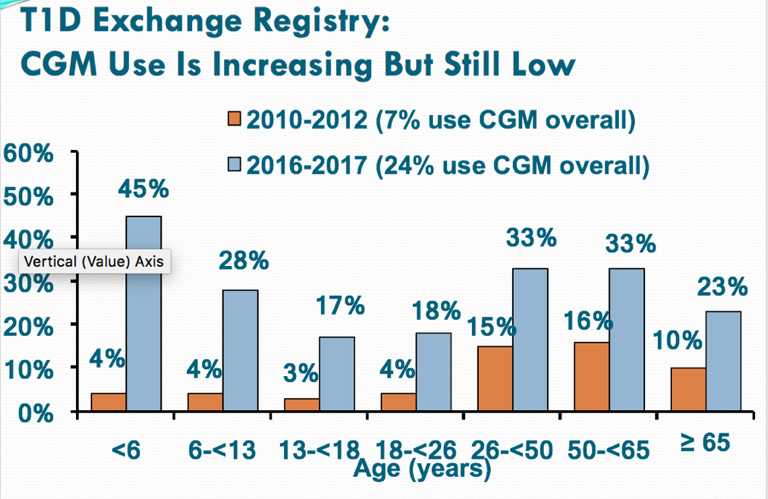 The numbers below represent search interest relative to the highest point on the chart for the given region and time. A value of 100 is the peak popularity for the term. A value of 50 means that the term is half as popular. A score of 0 means the term was less than 1% as popular as the peak.

Smart Pens/Caps and Insulin Dose Titration – Now 20+ Companies, On the Cusp of a Commercial Market?

Below, we enclose the pipeline products we are aware of, though we acknowledge this list is likely not 100% complete. We have done our best to be as comprehensive as possible based on the most recent public updates we’ve heard.

Major disappointment as CMS decides not to reimburse digital diabetes prevention programs. Is there hope?

The Movement for Person-First, Non-Stigmatizing Language Picks Up Steam in Diabetes & Obesity

Soda Tax Movement Presses On; Some Wins, Some Losses

Obesity Rates Hit 40% Among Adults, 19% Among Youth in the US

A Year of High-Profile Obesity Partnerships

Tackling Obesity – and Diabetes – in Adolescents

The list below covers late-stage pipeline products with expected milestones in 2018. We acknowledge that this list may not be 100% complete, though we’ve tried to be as comprehensive as possible based on the most recent public updates. If you notice anything missing, please write us.