During the first panel of the day, Dr. Susan Beane (Healthfirst), Ms. Noosheen Hashemi (January.ai), Ms. Rachel Sánchez-Madhur (One Drop), and Ms. Susan Tilenius (Vida Health) embarked on a wide-ranging discussion on technology and diabetes care. DiabetesMine founder Amy Tenderich moderated the panel and represented the payer perspective as the Executive Medical Director for  Healthfirst, a New York HMO that has contracts with Cecelia Health and Livongo for diabetes management. Ms. Sanchez-Madhur represented both the digital health startup perspective, as SVP of Product at One Drop, and also the patient perspective, as someone with diabetes. Finally, Ms. Hashemi and Ms. Telinius brought their perspectives as leaders in digital technology and founders and CEOs at their companies, January.ai and Vida Health, respectively. The four female panelists offered thoughtful insights into the importance of integrating considerations for personalization, patient empowerment, and accessibility.

DiabetesMine dedicated significant time and attention on Thursday to the voices of traditionally under-represented populations, specifically Black, indigenous, and people of color (BIPOC) in diabetes. The afternoon sessions kicked off with quantitative and qualitative results from the Diabetes Mine BIPOC & Diabetes Technology survey (check out a powerful five-minute video put together by DiabetesMine here). The survey took place in September 2020 and collected responses from 207 BIPOC individuals, over the age of 15, who either have diabetes or cares for someone with diabetes. As a convenience sample, the speakers stressed that the survey responses are not statistically representative, but still, the responses provide powerful insights into the experiences of BIPOC living with diabetes. Of respondents, 91% reported using insulin with 9% of caregivers for people with diabetes using insulin. Additionally, from a gender perspective, disproportionately more respondents – 74% – were female. 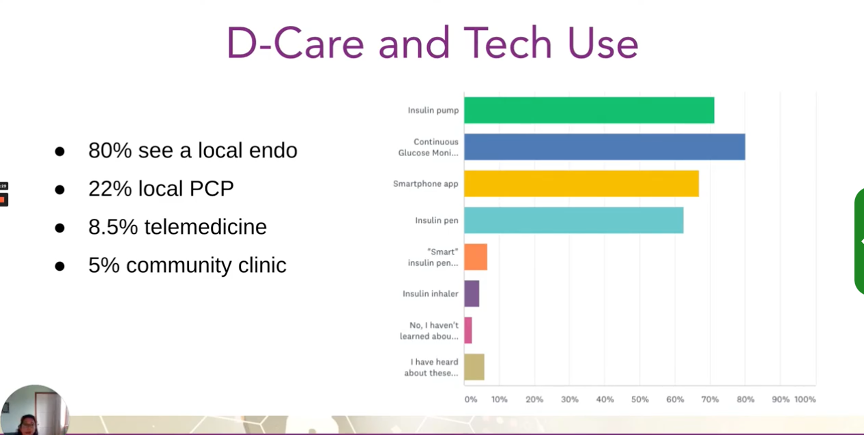 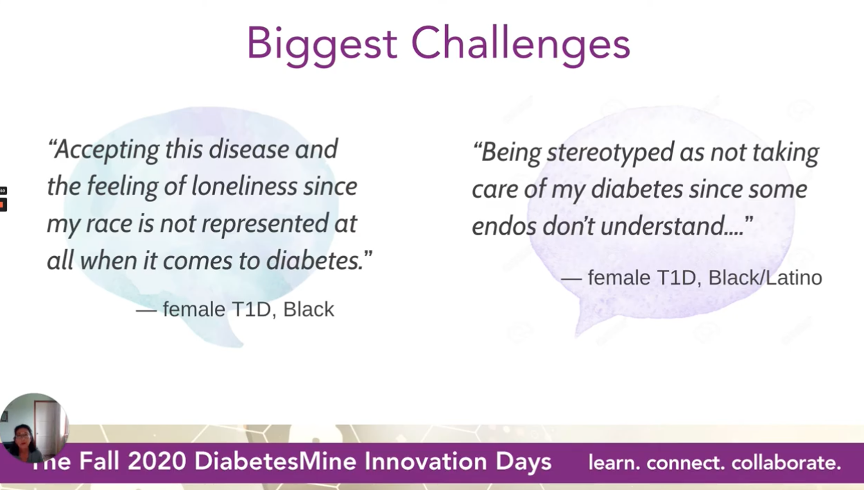 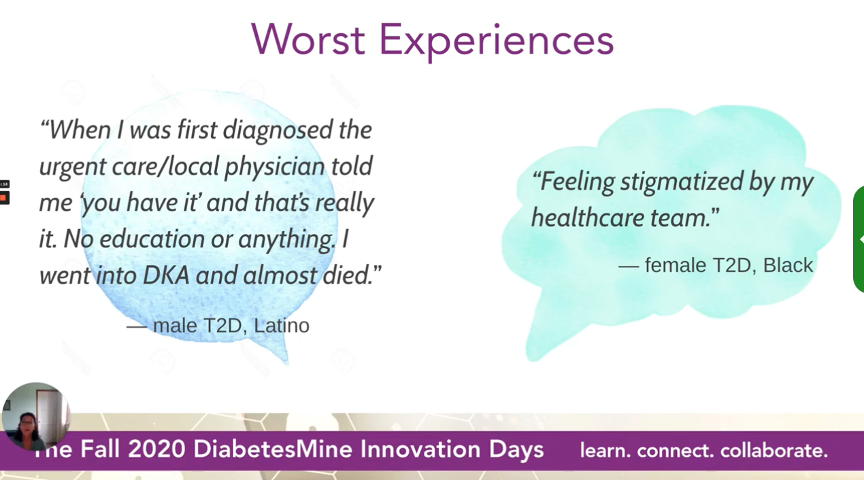 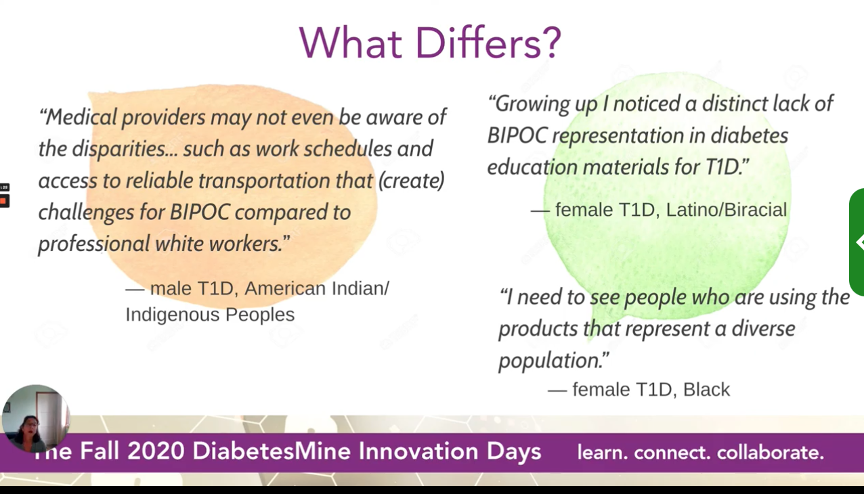 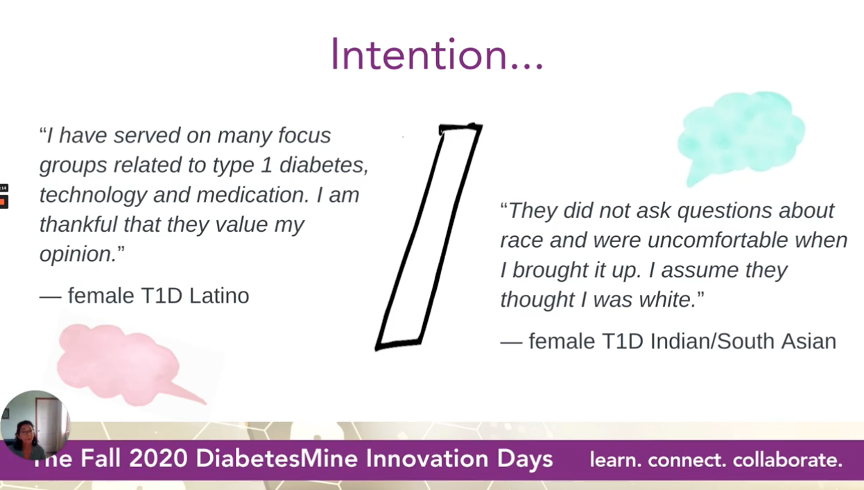 Following the BIPOC panel, pediatric endocrinologist Dr. Brynn Marks (Children’s National Hospital) provided an overview of racial diversity (or lack thereof) in landmark diabetes technology studies. In the landmark iDCL3 trial – the adult pivotal for Tandem/Dexcom’s Control-IQ – 89% of participants were White. Additionally, over half of participants in that trial had households over $100,000 (62%) and nearly all were privately insured (93%). That study was presented at ADA 2019 and published in NEJM. In the DCLP5 trial – the pediatric pivotal for Control-IQ – 81% of participants were White, 8% were Hispanic or Latino, 2% were Asian, and 0% were Black. That study was presented at ATTD 2020 and also published in NEJM. In the pivotal for Medtronic’s MiniMed 670G (presented at ADA 2016 and published in DT&T), there were no details on racial/ethnic makeup of the sample. Regardless, the lack of representation in these trials makes it difficult to accurately generalize results to minority groups – Dr. Marks recalled a study presented at ISPAD last month that found lower rates of CGM initiation and higher rates of CGM discontinuation in Black and Hispanic children, relative to white children.

During Day 1’s opening presentation, Jen Goldsack, the co-founder and executive director of the Digital Medicine Society, discussed the importance of balancing the power and risks of digital health and medical technology. This issue has becoming increasingly important as technology’s role in healthcare has grown with healthcare’s monumental shift toward remote patient monitoring and telehealth. Just in recent months, three of the biggest five companies in the world (Amazon, Alphabet, and Apple) announced new health monitoring products, (Amazon Halo, Alphabet’s pending acquisition of Fitbit, and Apple Watch 6). Ms. Goldsack launched the Digital Medicine Society (DiMe) in May 2019, because she and others believed in the power of technology but wanted to ensure that it is a tool for good and not a weapon: “DiMe exists to advance the safe, effective, equitable, and ethical use of digital products to optimize human health.” The Digital Medicine Society “sits at the intersection of two communities: healthcare and technology” and includes over 1,600 members from 43 countries with members from regulatory and government bodies (e.g., FDA, NIH, Veteran Affairs), industry (e.g., Dexcom, BD, Pfizer, Novartis, Roche, Biogen, AstraZeneca), associations (e.g., Digital Therapeutics Alliance, Biohacking Village); academia (Yale, UC San Diego, Scripps, Duke, Northumbria University (in Newcastle upon Tyne), UNC, and patient groups (e.g., Savvy Coop). Patients are invited to join the society as well, and patient perspectives are central to their organization’s work. “We take a three-tiered approach to patient involvement: (i) our membership is open to patients, and they have equal voices and equal membership; (ii) in our research, we start with the patient voice and focus a portion of our research directly on patient engagement; and (iii) we have formal partnerships with patient organizations like Savvy Coop.” More broadly, the organization focuses on research, communication and education, and community building with over 26 publications since founding last year, eight public comments submitted to the federal government, and 47 sponsors collecting digital endpoints (~20% of which are related to diabetes) – see the full list of digital endpoints here.