Orexigen recently provided its 3Q17 update in a call led by CEO Mr. Mike Narachi. Quarterly revenue for obesity drug Contrave (naltrexone/bupropion extended-release) nearly doubled YOY but fell 19% sequentially to $19 million. This sequential drop came against the difficult comparison of an impressive series of sequential gains: +23% in 2Q17, +38% in 1Q17, and +44% in 4Q16. Total volume (TRx) for Contrave grew 26% YOY in 3Q17 to ~208,000 total filled prescriptions, though this represents a decline from ~234,00o prescriptions in 2Q17. US sales in 3Q17 comprised the lion’s share of Contrave revenue at 94%, up from 78% in 1Q17 and 86% in 2Q17, rising 85% YOY but falling 14% sequentially to $18 million. Outside the US, sales fell 59% sequentially to $1 million, comprising 6% of franchise revenue. With double-digit YOY growth for three consecutive quarters now (+36% in 1Q17, +90% in 2Q17, and +97% in 3Q17), Contrave represents a bright spot in the obesity market (joining Saxenda), and we hope the product continues to do better commercially, after several quarters of YOY decline in 2016. In explaining the relatively subdued sequential performance for the Contrave business, management noted that fall is a seasonally weak period for weight management drugs – we aren’t really sure about this and are guessing (this is speculation) that a stronger 2Q17 resulted from a bit “lumpy” sales rather than quite as much strength as we had thought. Overall, however, we were glad to hear management maintain quite an optimistic outlook for Contrave’s sales trajectory and we hope this was apt. Additionally, Orexigen’s slides highlighted a recent patent decision reaffirming exclusivity for Contrave through 2030, following an Abbreviated New Drug Application (ANDA) filing by Actavis Pharmaceuticals to market a generic version of the product. 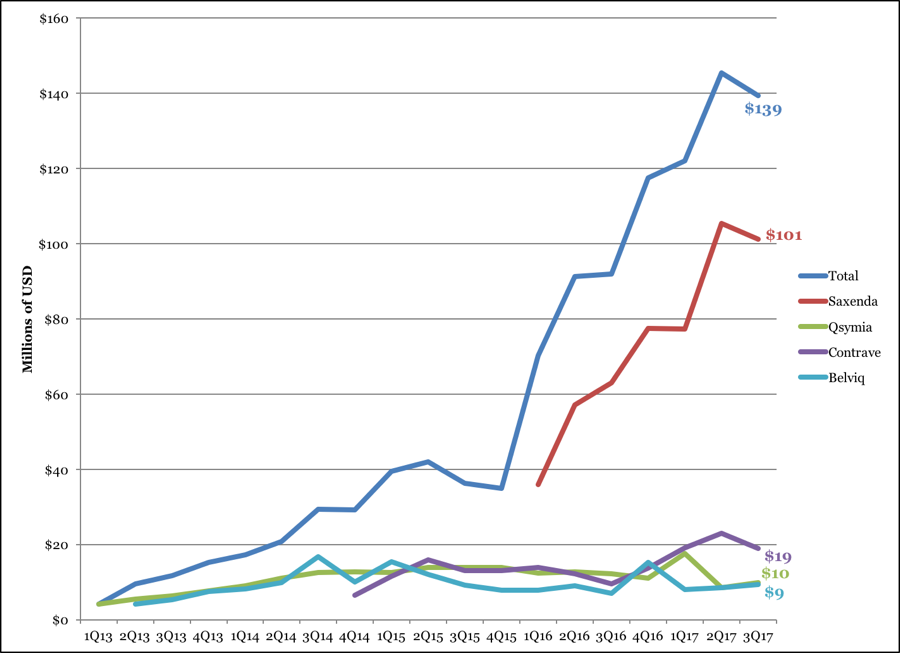 A: When you're looking at the new writer data, you're only looking at unique doctors who have prescribed for the first time. So, the 100,000 doctors that I mentioned that have already written a prescription for Contrave are no longer available: they're not in the denominator. So, over the life cycle of a product, you'd expect that to continue to decline. The prescription base is written by the entire universe of doctors who are prescribing Contrave.

A: I think both of those are pretty consistent. The slight decline may have been driven by some of the mix we've seen in terms of the proportion of our business that are using savings cards versus not, but all-in-all we're very pleased with the general trends that we've driven in terms of driving revenue per unit. In fact, as I mentioned in my prepared remarks, it's above our guided range, so we're continuing to monitor that and we're really pleased with how that's playing out.