Today, Medtronic announced the long-awaited international launch of the MiniMed 640G system with predictive low glucose management (“SmartGuard”). The system is now available in Australia, and launches in “additional markets” are expected over the next several months (we assume the major EU markets). The timing was on the quicker side of the “early 2015” guidance given in December when the 640G user evaluations were completed, though about 18 months delayed from the initial expectation to launch in Summer 2013. Medtronic’s press release, YouTube Video, and the company’s Australian website shared more specifics on the new pump platform, Enhanced Enlite CGM (MARD: 13.6% calibrated 3-4 times daily), and new Bayer Contour Next Link 2.4 meter than we’ve ever before heard. We also got a first glimpse at some of the direct-to-patient marketing, including some compelling patient ambassador videos – the focus is on an intelligent, safer, and easier to use pump. The messaging is summarized below.

In the US, Medtronic has an ongoing pivotal study of the MiniMed 640G/Enlite 3 sensor (n=84), which is now expected to conclude at the end of April (per ClinicalTrials.gov) – this is a four-month delay from the previous expectation to wrap it up last month (December). Per Medtronic’s presentation at JPM 2015, a US launch of the MiniMed 640G is expected by April 2016 (FY16). To hit this deadline, a PMA submission needs to follow the study’s completion – quite quickly! The timing would imply an FDA review of less than one year, a potentially tall order given the number of changes with this pump (SmartGuard, new pump platform, new Enlite 3 sensor) although this FDA is quite ambitious on the device front. Indeed, we did write last May that Medtronic was working hard with the FDA to quickly bring this pump to the US market, so perhaps a sub-12-month review is possible.

Medtronic’s presentation at JPM 2015 also gave us insight into the timing on the MiniMed 670G hybrid closed-loop system – launches are expected by April 2017 in the US and April 2018 in the EU. A lot has to go right for the company to hit this US timeline, which implies a pivotal study, regulatory review, and launch in two years. Few specifics have been shared on the MiniMed 670G algorithm, though we assume it will be a rather conservative treat-to-range algorithm.

More details on the 640G’s feature and marketing are below, along with a review of the automated insulin delivery commercial landscape.

1. SmartGuard (predictive low glucose management): The defining feature of the MiniMed 640G is of course the predictive suspend feature, which suspends insulin delivery with a 30-minute prediction horizon and resumes insulin delivery once glucose levels recover. We learned today that SmartGuard allows patients to set multiple low limits throughout the day, along with an option to choose the times of day or night to enable the feature. (The low limit range is 50-90 mg/dl.) Notably, patients can also choose whether they want to be notified during these events or not. This is outstanding customization and we’re very glad to see this is possible – striking the right balance of alarms is tough and varies significantly from patient-to patient.

2. The international launch of the MiniMed 640G includes the Enlite Enhanced sensor (“Enlite 2”) – it has a MARD of 13.6% when calibrated 3-4 times daily, the same labeling as the original Enlite. This is the first accuracy information we can ever recall hearing on the product, and it was somewhat surprising to see the accuracy is the same as the Enlite – Enlite 2 has an 80% reduction in implanted size and a new electrode pattern to improve consistency. With those improvements, we had expected an uptick in accuracy. The Enlite 2 sensor originally launched in Europe at ATTD 2014. It is also a six-day wear CGM.

3. Remote bolus from the Contour Next Link 2.4 meter: This feature is promoted quite heavily in the marketing materials and video testimonials, given the discretion benefits of bolusing right from the meter without having to pull the pump out. We were big fans of the Contour Next Link meter in our test drive of the MiniMed 530G, and it’s terrific to see Medtronic has added the capability for remote bolusing. Diehard fans of the Animas OneTouch Ping, especially parents, love this feature, and we think it will be well received. Similar to the previous gen, the meter automatically transmits blood glucose results into the pump’s Bolus Wizard, calibrates the Enhanced Enlite sensor, and has integrated CareLink USB upload capabilities.

4. Waterproof: The MiniMed 640G is waterproof in up to 12 feet of water for 24 hours at a time. This is the same labeling as on the Animas OneTouch Ping, and better than the OmniPod’s “watertight” rating of 25 feet for 60 minutes. Pumps destroyed by water were another major criticism of the previous Paradigm generation – we salute Medtronic for innovating on this front and working to bring patients what they wanted.

5. Full-color, light-adjusting screen: The MiniMed 640G screen is unquestionably an improvement over the harder to read gray scale screens of the Paradigm line. This should make readability easier during the day and night. We do wonder about the battery tradeoff and assume this addition will require more frequent battery changes. The MiniMed 640G will use a AA battery, an uptick from the AAA battery of the Paradigm line.

6. Improved user interface: The MiniMed 640G has a simpler menu that allows for “easy navigation with less button pushing.” We are most excited to see insulin on board information on the home screen. The pump has a four-way navigation arrow and a back button. Medtronic has also shifted to a vertical portrait orientation designed for both right and left-handed users. The pump does not have Bluetooth, Wi-Fi, or cellular connectivity.

7. More robust on-device reports: The MiniMed 640G has a Sensor Glucose Review feature, which displays CGM history information based on high and low limits. We are glad to see a time-in-range pie-chart in this menu, something we believe every CGM device should provide! Abbott’s FreeStyle Libre also provides such a graph.

8. In Australia, the MiniMed 640G will have the same reimbursement as the Veo. Therefore, if a patient has the appropriate level of private health insurance, the cost of the insulin pump presumably will be covered. There is no information on upgrade programs.

11. Medtronic has some compelling taglines to accompany the launch of the MiniMed 640G. We look forward to seeing how the pump fares in the EU and US markets vs. other products, as well as how other companies talk about it.

13. As we noted in our 2014+2015 Reflections piece, Medtronic has made the biggest public commitment to automating insulin delivery of all the players in the field. Animas, Asante, Insulet, Roche, and Tandem have yet to express a strong goal to automating insulin delivery – while some have telegraphed interest (e.g., Asante), discussed R&D efforts (e.g., Roche) or even done small studies (e.g., Animas), no company has jumped into the field as clearly as Medtronic. We assume there are internal efforts at many of the companies on this front, but there is nothing of note to report publicly. Of course, Medtronic has an unmatched R&D budget (~$141 million for Diabetes, per the 2014 Analyst Day) and infrastructure (975 sales reps), making it a tough competitor and in a good position to develop and commercialize an expensive new technology. And of course, it’s the only company with a pump and CGM in-house, though Roche may steadily emerge on this front. As a CGM supplier, Dexcom has collaborated with everyone who is interested, though without a pump, cannot automate insulin delivery on its own.

14. Meanwhile, we continue to wonder about the path to market for academically developed technologies, such as those from MGH/BU, UVA, Cambridge, and the DREAM group. From one perspective, the established pump companies could license the academic algorithms and build Dexcom-integrated systems – the advantages of this approach are numerous, given the needed experience in regulatory submissions, manufacturing, insurance/reimbursement, sales reps, customer service/support. Alternatively, a startup could take the academic technology and bring it to market. This brings potential agility advantages, though the learning curve may be high on the aforementioned fronts. It’s certainly never been a more exciting time in automated insulin delivery, and there’s no question patients benefit from more options – we hope these academic systems do find a way to make it to market.

15. And of course, it’s hard to know what powerhouse trio Jeffrey Brewer, Bryan Mazlish, and Lane Desborough will do at their new startup, SmartLoop. As we reported in December, the company will focus on leveraging technology and automation to improve the lives of people with type 1 diabetes. It’s pretty stealth mode for now, but we believe the brain trust has big things in store. SmartLoop’s Lane Desborough - then Product Strategist at Medtronic - led the team responsible for the technology development of the Predictive Low Glucose Management algorithm.

Q: How do the pump size dimensions compare to the MiniMed 530G?

Q: In what other countries will the 640G launch in the next few months?

Q: What is the US timeline for a PMA submission?

Appendix: Pictures of the MiniMed 640G 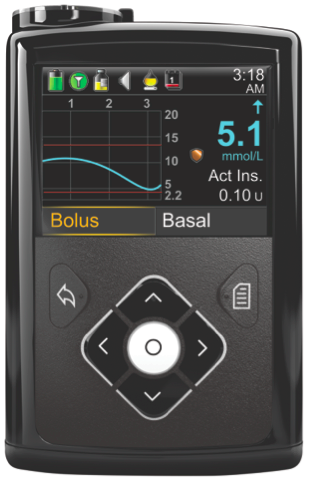 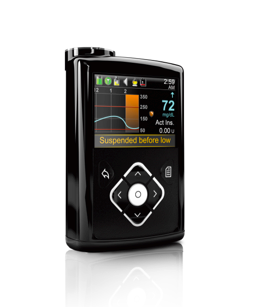