GSK provided its 2Q17 update in a call this morning led by CEO Ms. Emma Walmsley. The major headline on the diabetes front was that the company will withdraw support for GLP-1 agonist Tanzeum (albiglutide), which posted £23 million ($30 million) revenue in 2Q17, down 21% YOY as reported (29% in constant currencies). This double-digit decline occurred from an already-low base of £29 million ($42 million) in 2Q16. Sequentially, sales fell 18% from £28 million ($35 million) in 1Q17, marking a second consecutive quarter of sequential loss. GSK plans to eventually exit Tanzeum entirely, and this move is part of new CEO Ms. Walmsley’s plan to restructure the pharmaceutical portfolio to focus on HIV, respiratory, and infectious diseases. No details on the timeline or logistics of this Tanzeum withdrawal were provided, but management mentioned they will cease manufacturing, complete clinical studies as agreed with regulators, and work with HCPs to transition patients to alternative treatments.

Tanzeum revenue in 2Q17 was almost entirely comprised of US sales at £22 million ($29 million) vs. £1 million ($1 million) in ex-US sales. For comparison, Lilly’s Trulicity (dulaglutide) launched around the same time as Tanzeum and posted $480 million in global sales for 2Q17, more than doubling YOY from $201 million in 2Q16. By our calculations, Tanzeum captured only 2% of the $1.4 billion GLP-1 agonist market in 1Q17, and only 3% of the nearly $5 billion GLP-1 agonist market in 2016. Tanzeum’s post-launch growth has never been striking, and quarterly sales peaked at £38 million ($47 million) in 4Q16 (revenue did show two-fold YOY growth in early quarters on the market, but from a very low base). During Q&A, management expressed an acute awareness that GSK hasn’t been able to carry the GLP-1 agonist forward to commercial success, the suggestion being that the company should have “called it much earlier.” You can read a transcript of this below.

As we learned in Lilly’s 2Q17 update this week, total US prescriptions (TRx) for the class grew 25% YOY from 2Q16. In the full year 2016, pooled GLP-1 agonist sales rose a remarkable 25% YOY to ~$5 billion, up from $3.9 billion in 2015, when the class grew 21% YOY. Tanzeum’s small share of the market by value is indication that the product faces tough in-class competition, and we imagine this competition can only intensify with the addition of Novo Nordisk’s once-weekly semaglutide and Intarcia’s ITCA 650 (though both candidates are still pending FDA approval). On the other hand, only ~5% of people with type 2 diabetes in the US were on a GLP-1 agonist in 2013, according to a Diabetes Care article. It is one of our fondest wishes for more patients to access this highly-effective class of therapies with glucose-lowering, weight loss, and other benefits (including possible cardioprotection), and we do see plenty of room for multiple products to be commercially successful, though we also understand that the bar for diabetes therapies is possibly higher now than ever. GSK’s CVOT for Tanzeum, HARMONY, is expected to complete in March 2018 according to ClinicalTrials.gov.

Q: On Tanzeum, what do you think was done wrong? What happened there, in terms of developing and taking it to market? I understand most observers were probably not viewing Tanzeum as the strongest product in its class.

A: We went through a rather interesting and different development path for Tanzeum, which I think we won’t do again. The way we did it was outside normal governance. The simple answer is that it wasn’t called early enough when the data told us that this product wasn’t going to be commercially successful in our hands. I think we should have called it much earlier. I think that was actually evident after some of the early trial readouts, and I think at that point, we should have called it. Stopped it. 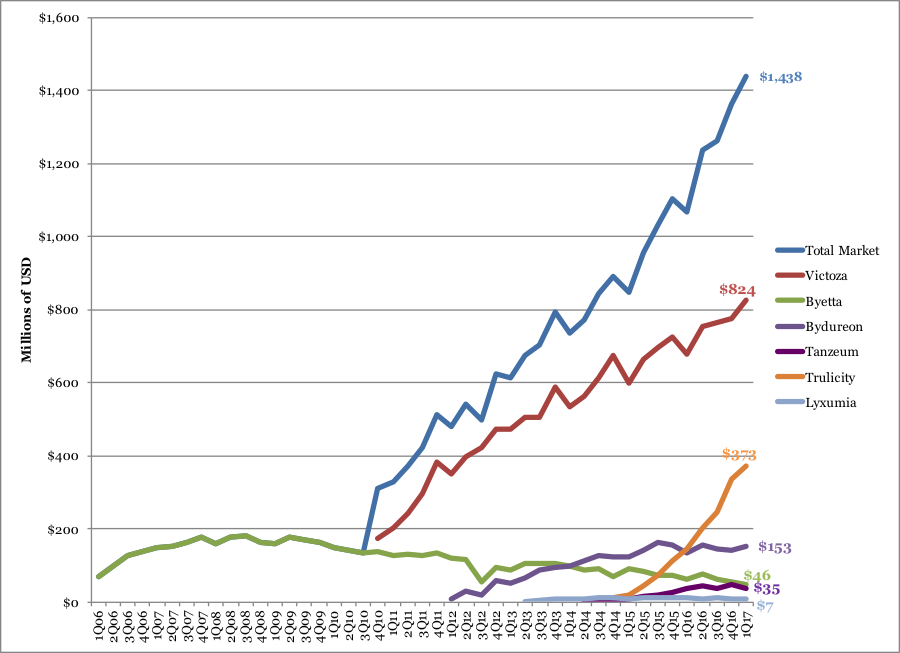