We have returned from a packed Friends for Life conference brimming with energy around diabetes technology and the progress on more user-centric, radically convenient product designs. Nowhere was this more apparent than in talks from Beta Bionics and Bigfoot, who both showed their takes on where automated insulin delivery needs to go. See these and more highlights below!

Beta Bionics CEO Ed Damiano shared an updated study timeline for the iLet: an insulin-only pivotal study to begin in 2H19, with an insulin-only FDA approval expected in 2H20 (adults and pediatrics); and (ii) an insulin-glucagon pivotal study start in late 2019/early 2020 and approval targeted for 2022 (with Zealand dasiglucagon). The insulin-only study timing has slipped slightly from the prior April 2019 planned start, though 2020 is the key, as many systems are targeting a launch at that time. Of course, the bihormonal timing could also change meaningfully, depending on guidance from the FDA’s CDER division on Zealand’s dasiglucagon. Dr. Damiano also announced that the FDA has approved an IDE to use Senseonics’s Eversense in the integrated iLet device’s home-use bridging studies (running from now until October), in addition to Dexcom. This is great news and very quick following the initial iLet device FDA IDE approval in May. The press release nicely emphasizes the company’s commitment to interoperability and patient choice, as it’s the only closed-loop system now compatible with two companies’ CGMs – at launch, the plan is both Dexcom G6 and Senseonics’ Eversense. Added Dr. Damiano in the talk, “We’re trying to build a platform that allows people to have a meaningful choice. We now have a system that can give you choice: single hormone, dual hormone, three different insulins (Fiasp, Humalog, Novolog), and two sensors.” We love it!  The first dosing in adults with the iLet using the Dexcom CGM and Novo Nordisk’s Fiasp insulin in the prefilled PumpCart (!) began earlier this month at Stanford and MGH (n-36); children will be dosed with the iLet/Dexcom CGM starting this month; and the first adults will use the iLet/Senseonics Eversense CGM beginning in August at MGH. Notably, the iLet is the only clinical trial ongoing right now testing Fiasp in the prefilled PumpCart – wow! Dr. Damiano had a working prototype of the Gen 4 iLet, which looks outstanding and has meaningfully improved on size, weight, touchscreen, and user experience relative to the current Gen 3 device – see pictures below. The tagline is, “Carry your glucose metabolism in your pocket” – very much harkening to the original iPod’s tagline to “Carry 1,000 songs in your pocket.” Dr. Damiano was wearing both iLet devices on his body, including one driven by a Senseonics’ Eversense CGM that Dr. Steven Russell inserted into his arm – what a guy! Other highlights below include pooled Bionic Pancreas data in adults (outpatient studies so far vs. T1D Exchange outcomes) and encouraging first data from ongoing tests of the Gen 3 iLet. 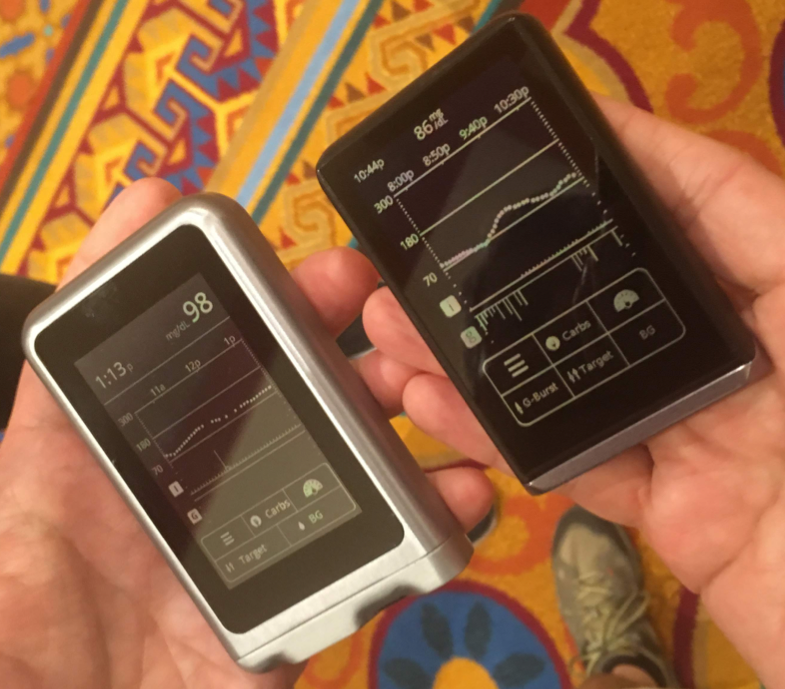 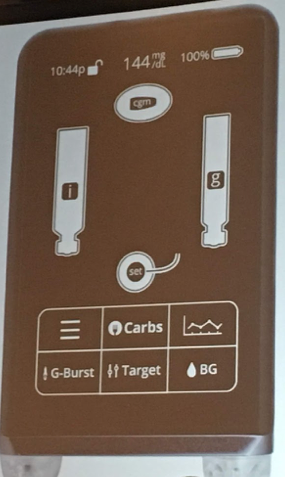 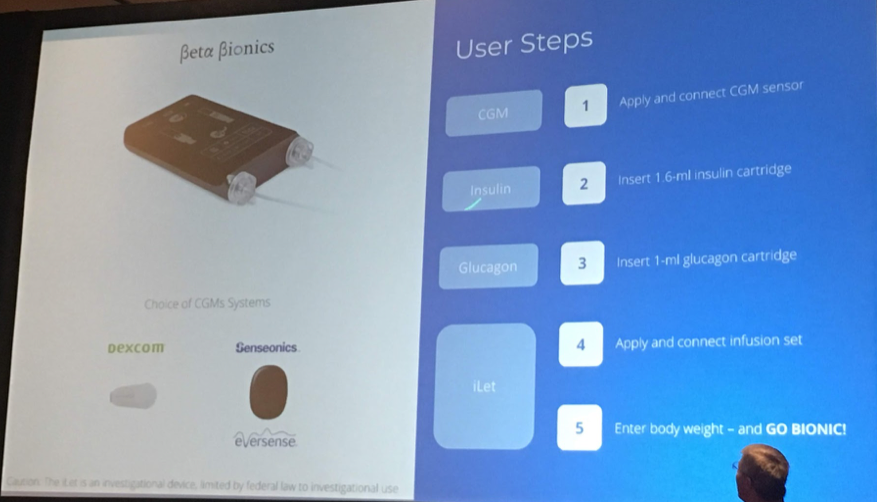 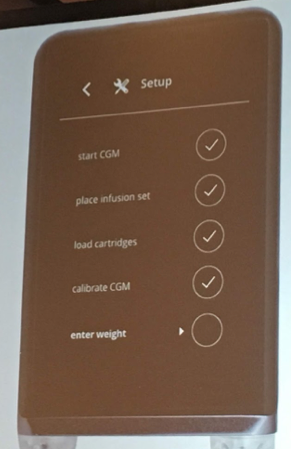 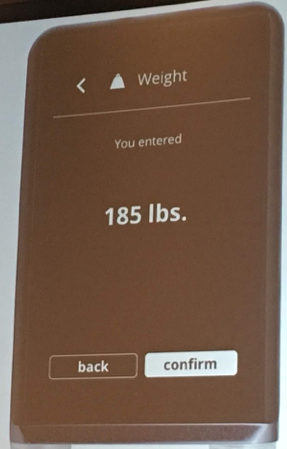 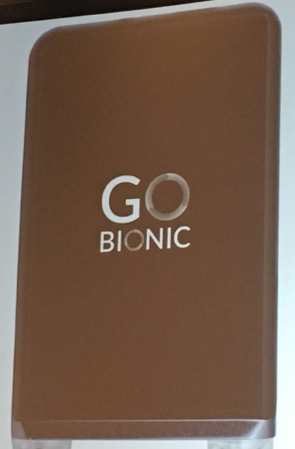 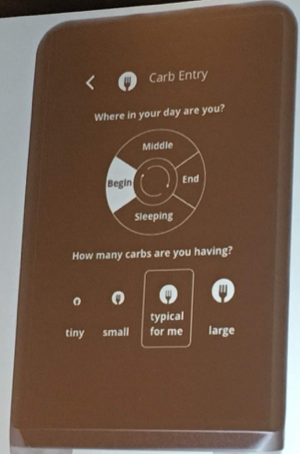 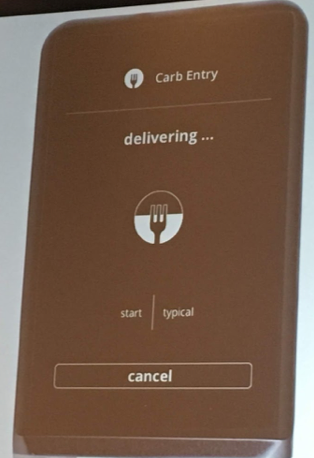 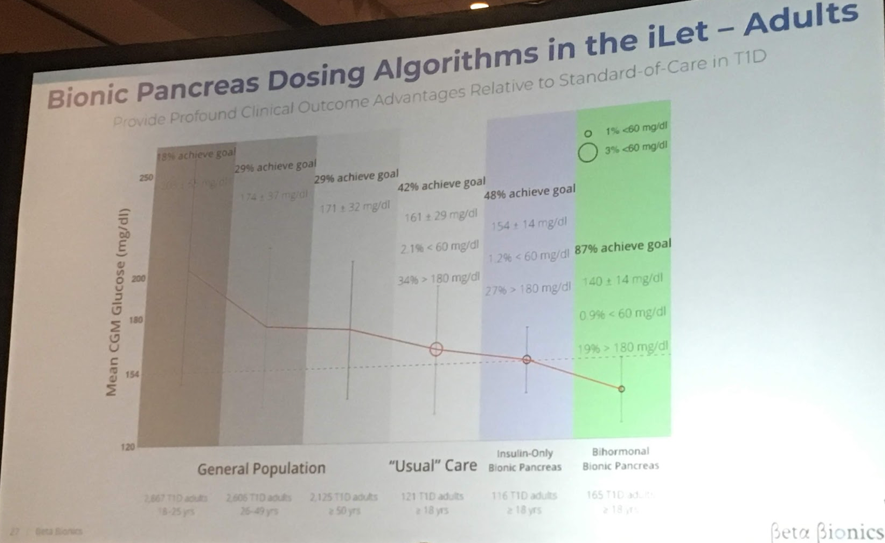 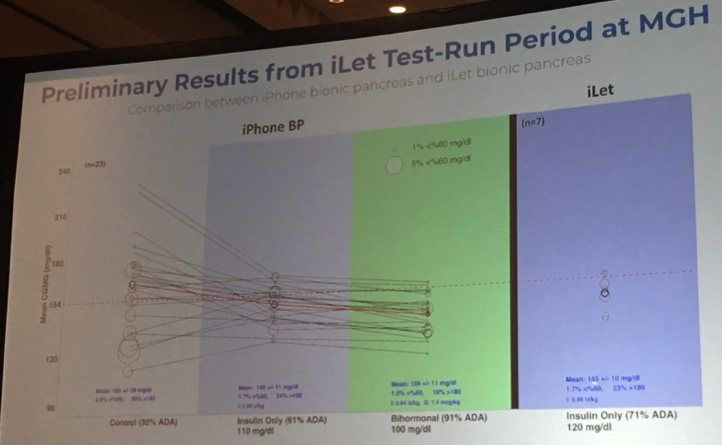 Bigfoot CEO Jeffrey Brewer made his first ever FFL appearance, sharing the Bigfoot story and some never before-seen product portfolio screenshots. He said a pivotal of the Loop system will start in 2Q19 for 14+ year-olds – more specific timing than previously shared (“2019” and “early 2019”) – with a launch ambitiously maintained for 2020. (The company has only run one clinical feasibility study so far with Dexcom CGM; see comments on simulation modeling below.) Bigfoot’s slide design implied a Loop “phased pivotal” might actually initiate in 2018, though that was not stated. The Inject system to titrate basal/bolus insulin for MDI users is also expected to launch in 2020; no pivotal timing was shared. Mr. Brewer said the next-gen Abbott FreeStyle Libre no-calibration CGM with Bluetooth is coming “sooner than people realize.” Whoa – we can’t wait to hear more about its feature set relative to the current Libre! (Will it launch as a standalone mobile CGM prior to Bigfoot’s Loop/Inject?) Interestingly, the Inject insulin dose capture cap (acquired from Timesulin) now includes a screen, which has not been shown in recent talks. Mr. Brewer also showed a very expansive portfolio of Bigfoot offerings, ranging from BGM and a smart cap for basal-only type 2s all the way to the pump-based Loop system with FreeStyle Libre CGM – clearly the company aims to go broad and the AgaMatrix Bluetooth BGM is also going to be part of its offering. (No timing was shared on these other products, which are presumably going to come after Loop and Inject.) We enjoyed a mockup of the monthly Bigfoot supplies packaging, which was all color-coded and looked extremely consumer friendly – it reminded us of PillPack, but for diabetes supplies. The whole system retains the goal of being so easy a PCP could prescribe it, and Bigfoot clearly has the clinician experience top of mind. In Q&A, Mr. Brewer highlighted that the price of the 670G is the “high-water mark of what any insurance company will ever pay for automated insulin delivery. Everything in the future will have to cost less. We’re building a business that will do that.” He even said Medtronic is having to discount the 670G in order to get payers to cover it. See many cool slides and our favorite quotes below. 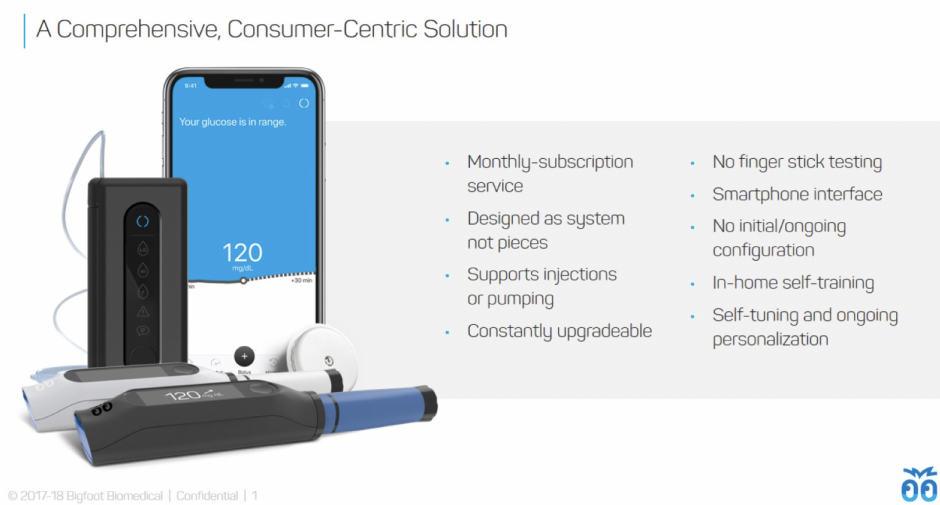 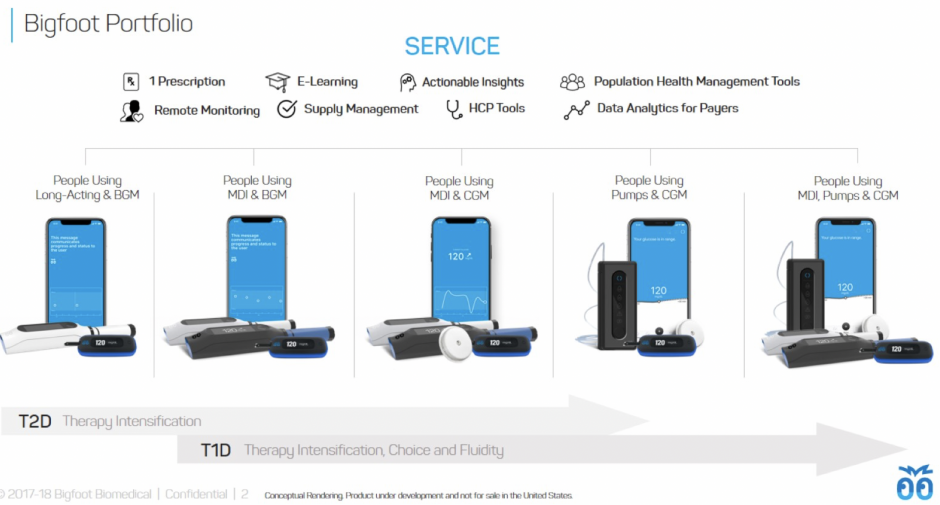 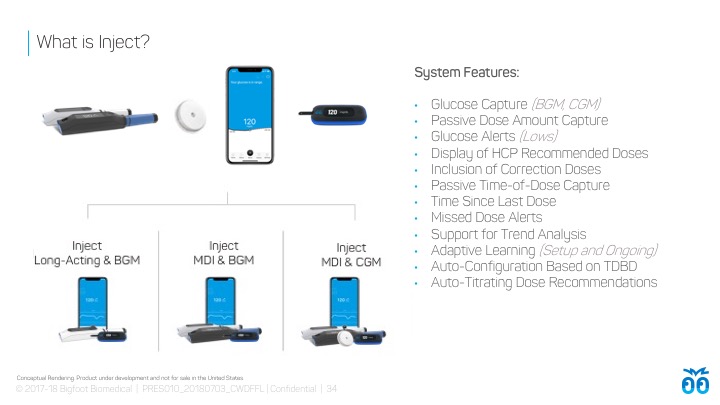 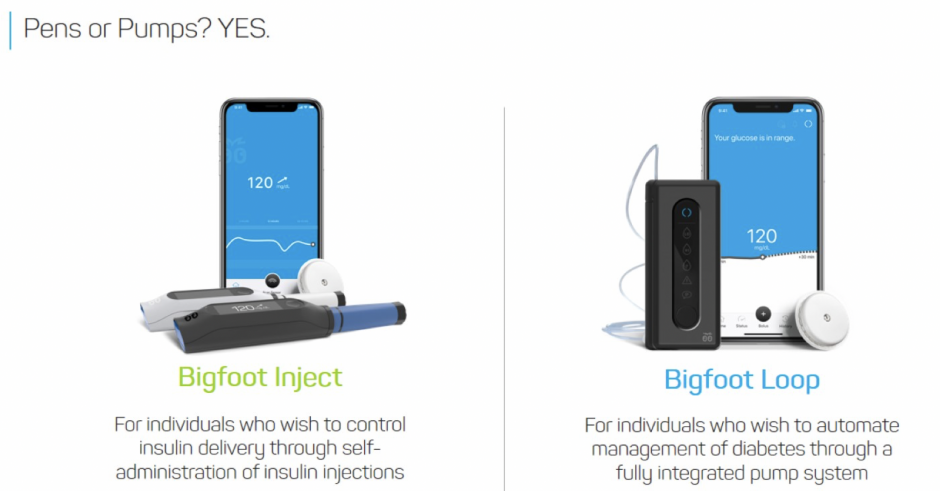 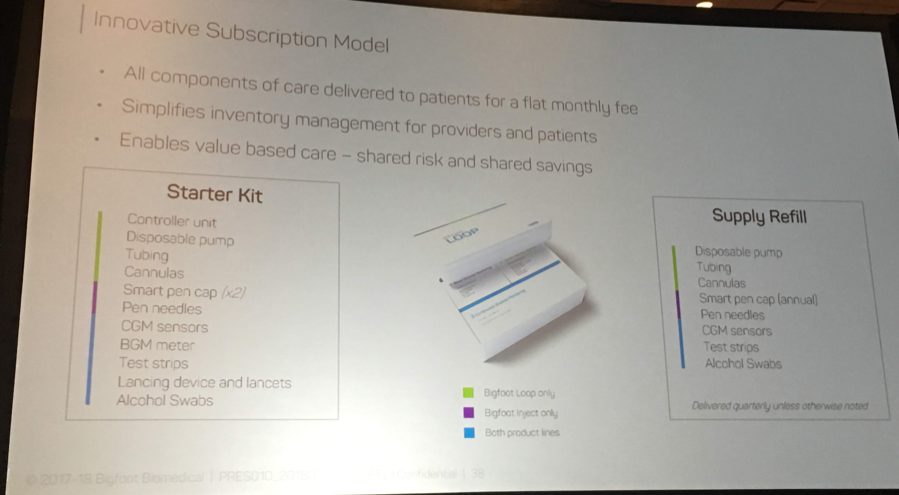 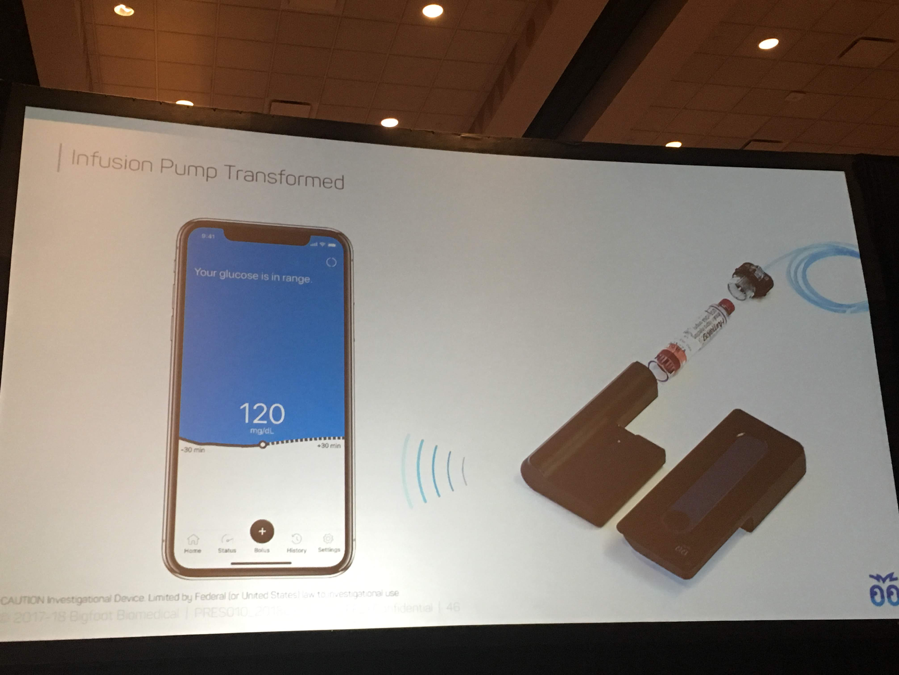 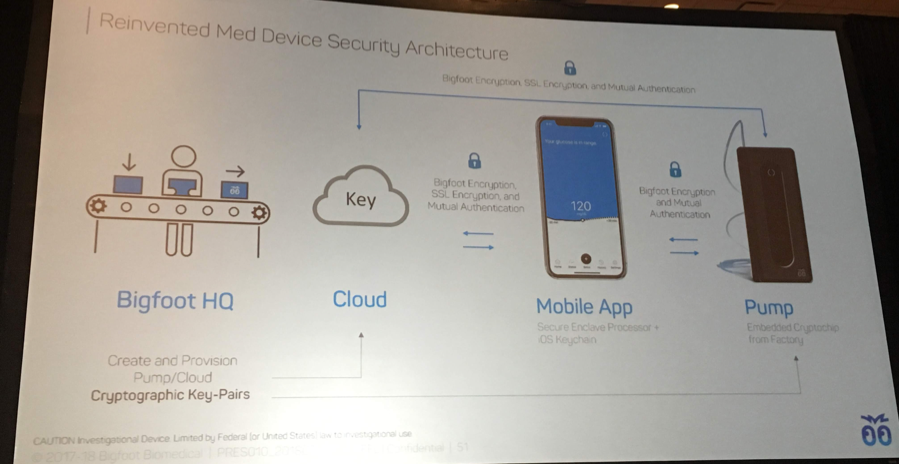 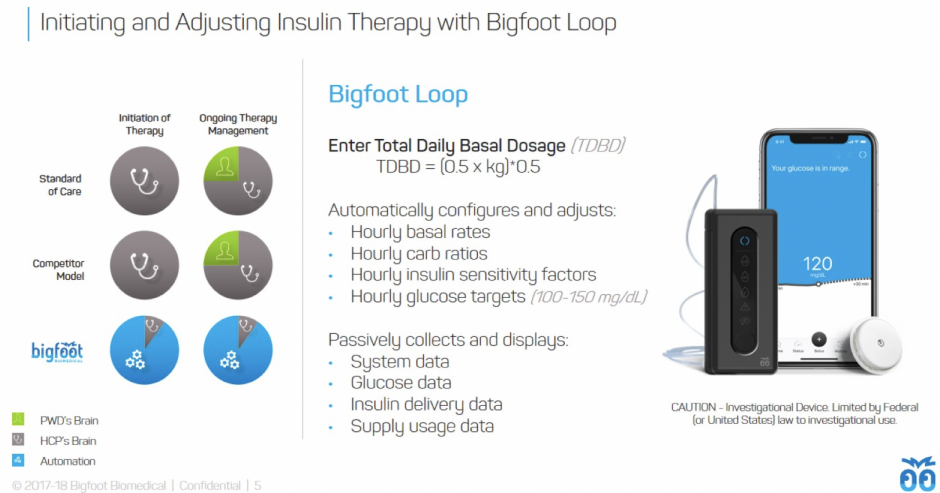 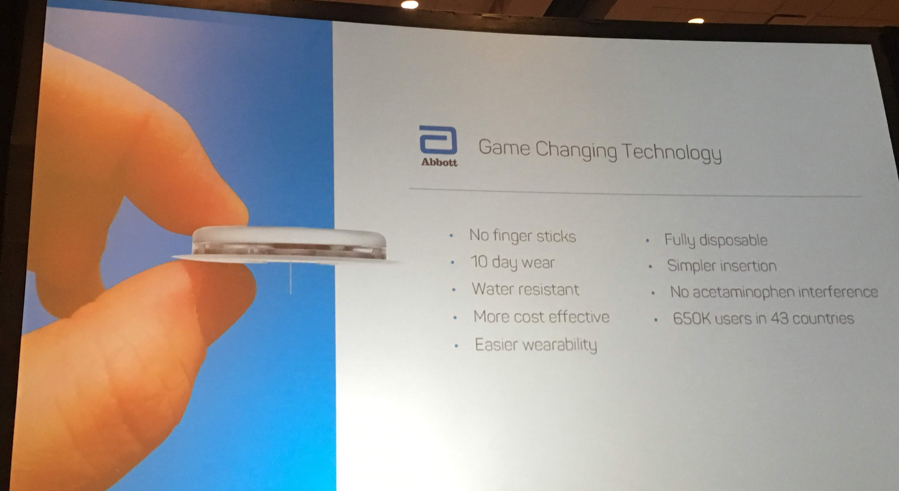 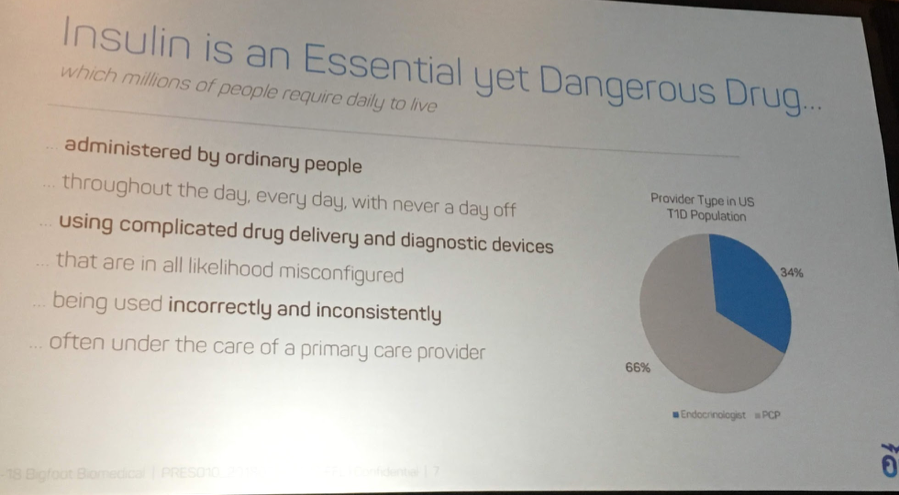 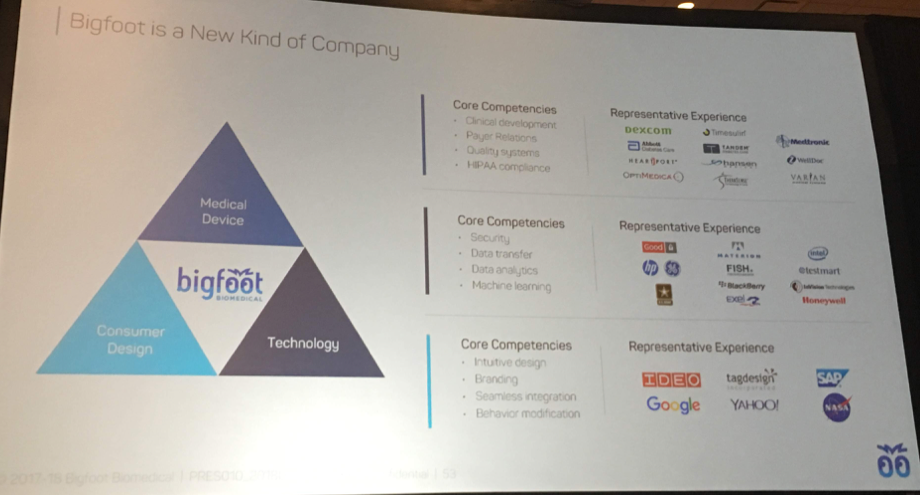 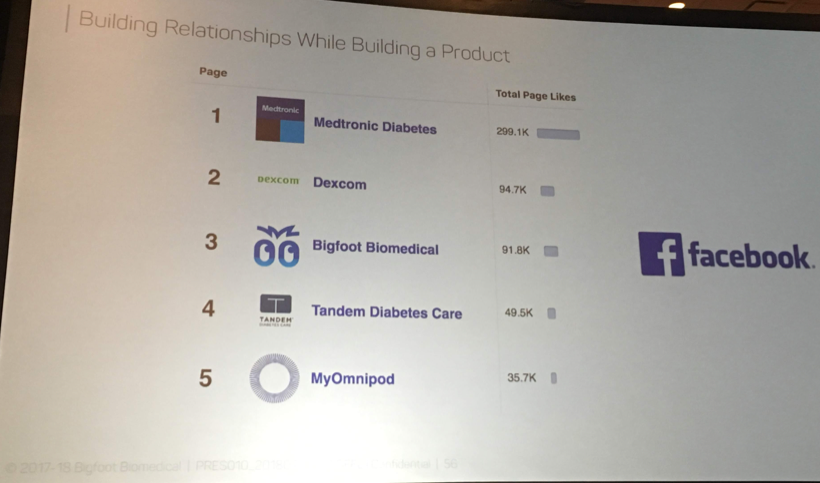 Stanford’s Dr Korey Hood did a deep dive on the psychology of diabetes devices and closed loop, including barriers to adoption, patient and clinician hopes/expectations for AID (many recent papers) and “rules of engagement” sharing CGM data. The papers are linked below, which could have big implications as the field grows to reach broader populations – especially teenagers, where device adoption remains lowest and diabetes distress remains high.

In a sweeping overview of type 1 diabetes prevention, University of Florida’s Dr. Desmond Schatz covered what has been learned in the past 10 years and why he’s optimistic about the future – download a PDF of his slides here. Despite 71 completed trials and 35 ongoing to prevent or intervene in type 1 diabetes over the past 10 years, little tangible progress has been made in terms of a cure or delay of disease onset. Harkening back to optimistic inventor Thomas Edison, Dr. Schatz summarized it well, “I have not failed. I’ve just found 10,000 ways that won’t work.” Dr. Schatz noted the heterogenous nature of type 1, little knowledge about mechanisms (“Is type 1 really a primary autoimmune disease?” – whoa), animal model-to-human translation issues, and little success of immune interventions so far. He questioned what has been the driver(s) of low success: Wrong approach? Wrong combination? Wrong time? (Or maybe all three…) Nevertheless, Dr. Schatz is hopeful we’re entering a new era, referencing TrialNet’s study of low-dose ATG (Sanofi’s Thymoglobulin for kidney transplant immunosuppression), which demonstrated significant c-peptide attenuation and reduced A1c at one year in a presentation at ADA 2018. “Low-dose ATG, alone or in combination, should be considered as a potential means of preventing T1D.” Notably, the one-year data was just published online in this month’s Diabetes Care (Haller et al.), and two-year data will be completed this fall. Moving forward, Dr. Schatz proposed that prospective type 1 diabetes prevention therapies need to address all three components of the immune system (innate, adaptive, regulatory) and improve beta cell health – aggressive combination and primary prevention strategies may be the most attractive avenues. To finish, Dr. Schatz gave a call to action, refreshing his ADA 2016 talk on bringing diabetes to 212 degrees – “We need YOU to participate.” Preventing type 1 diabetes – the gateway to a cure, in Dr. Schatz’s view –  remains a long road ahead, but his enthusiasm gives us hope that the field has many irons in the fire. Following ADA 2017’s mixed/bleak results for this field, the ATG results seem promising and our competitive landscape suggests a lot more interest is in the field! See some of our favorite slides from this talk below, and download the PDF here. 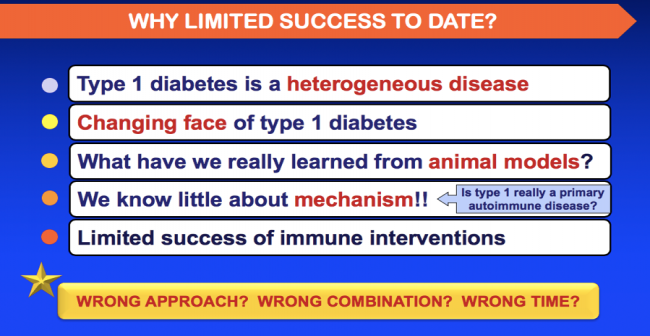 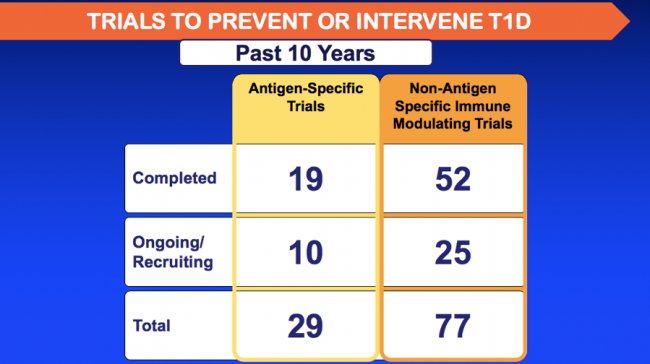 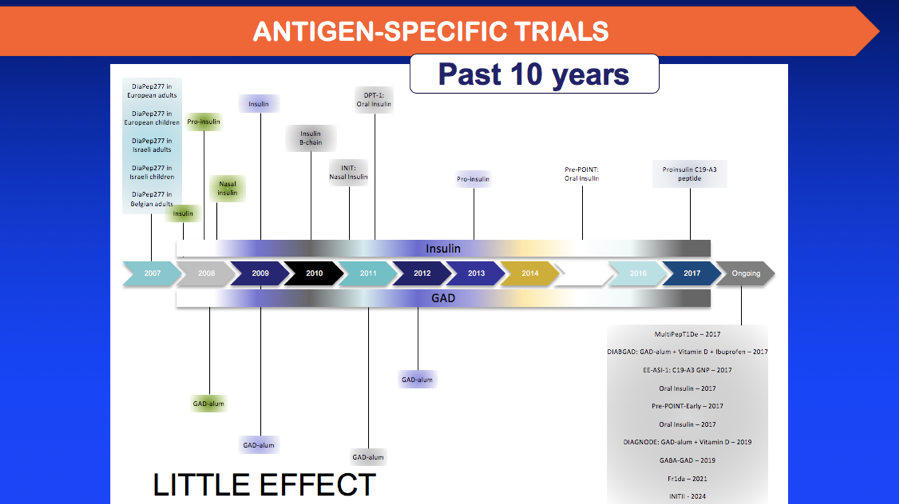 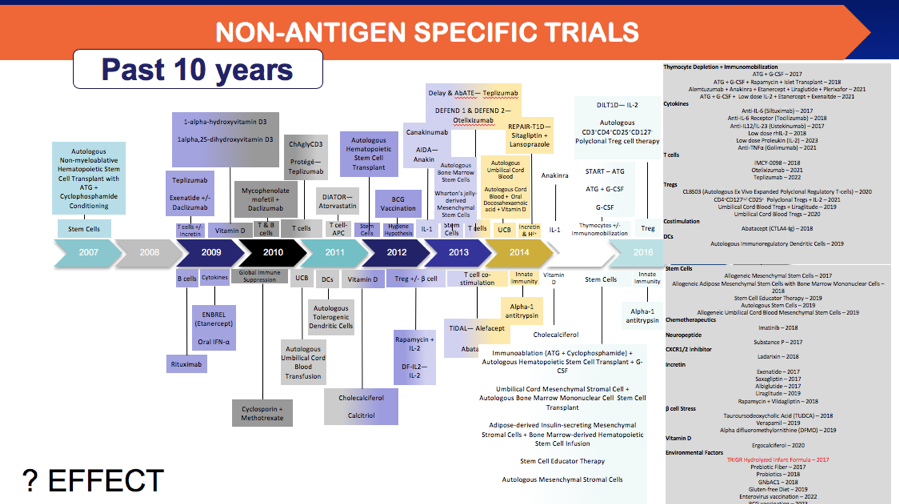 diaTribe held a fascinating panel discussion with the insightful Dr. Bruce Buckingham (Stanford), Dr. Des Schatz (UFL), Scott Johnson (mySugr), and Erik Shoger (dQ&A). Watch the Facebook video of the discussion here, which touches on best practices for coping with diabetes in families, how Drs. Schatz and Buckingham approach appointments (~45 minutes is what they typically spend with each patient/family!), what has most recently made the biggest different in their patients/their own lives, and more. All emphasized how behavioral type 1 diabetes is, even with all the technology and data patients now have access to. Dr. Schatz noted that he only looks at glucose data with ~10 minutes left in the appointment; otherwise, it dominates the discussion (often in a negative way). Wow! We’ll update this report with quotable quotes, though the full panel discussion is definitely worth listening to!

6. Adam Brown on What’s New in Diabetes Technology, Bright Spots & Landmines, and Advice to for Teens with Diabetes

Adam gave three presentations at Friends for Life this year – two to adults (diabetes tech and Bright Spots & Landmines) and one to the teenagers. See links to slides below and videos of the adults presentations!