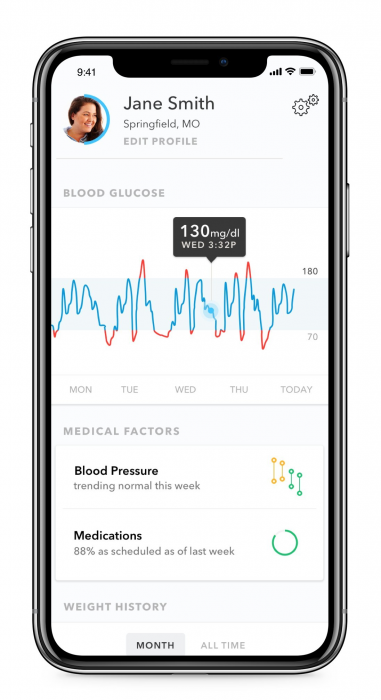 Abbott and Omada have developed a “tailored experience” for Omada’s eligible type 2 participants – a picture of the combined app (see above) was included in the press release. Eligible participants will have an online physician consultation, receive a prescription for CGM, and have FreeStyle Libre and a connected weight scale mailed to them as part of a welcome kit – very similar to the welcome kit that Onduo offers. We are not sure how many people will be eligible for the program through employers and health plans, but Omada does have an impressive 275,000+ members across all its programs (mostly diabetes prevention – we do not know how many people are in its newer type 2 program). Data from FreeStyle Libre will be accessible to Omada’s CDE coaches through Omada’s app, flowing in from the separate FreeStyle LibreLink app (i.e., users will need to engage with two apps). Using CGM data, Omada’s CDEs will be able to provide recommendations through in-app chat. Users will also have in-app educational lessons, a peer support group (a nice differentiator), and an action plan – all already part of Omada’s diabetes management program and exciting value-add over standalone CGM data alone. Abbott SVP of Diabetes Care Mr. Jared Watkin was quoted in the press release, expressing excitement for “giving people with type 2 diabetes actionable information that leads to better health.”

For Abbott, the partnership with Omada brings a strong digital health/coaching offering to leverage FreeStyle Libre data in type 2 diabetes. Omada has proven itself over many years –in terms of compelling, user-centered design, prevention outcomes, business model, scalability, fundraising – and the addition of FreeStyle Libre should enhance its programming. Last year, Abbott announced a partnership with Livongo to bring FreeStyle Libre Pro to eligible Livongo members at select on-site clinics, though we have heard nothing on this since the announcement. (Livongo’s website does show someone wearing FreeStyle Libre.) People with diagnosed type 2 diabetes are of course a huge potential market for CGM (>20 million diagnosed in the US), though the business model remains a big question here – what is the right frequency of wear to balance better outcomes vs. additional cost? Omada’s program will be a convenient place for Abbott to (i) develop new models of wear and business cases for people with type 2 diabetes; (ii) to add digital education and coaching based on CGM data; and (iii) to gather real-world outcomes data to help expand coverage of CGM in type 2 diabetes. The partnership presumably opens up potential for Abbott and Omada to develop co-branded CGM and coaching bundles.

Q: How many people with type 2 diabetes will actually be able to receive FreeStyle Libre via Omada's program? Could it eventually extend to people with prediabetes?

Q: What is the length of the deal? What are the financial terms? Who pays whom? What were the terms behind FreeStyle Libre exclusivity?

Q: How many participants has Omada treated through its type 2 diabetes management program launched in June 2018? Did it notice many users wearing FreeStyle Libre?

Q: How will Omada’s CDEs utilize data from FreeStyle Libre? How often will they look at the data? What sorts of education will be available for patients to: (i) understand and interpret their data (e.g., time-in-range, highs, lows, GMI); (ii) to run personal experiments (e.g., eating different meals and foods and observing the impact); and (iii) creating lasting behavior changes? Will users be able to take photos of meals and pair that data with CGM traces?

Q: How will this change pricing (if at all) for Omada’s employer and health plan clients? How will pricing of the Omada/Abbott FreeStyle Libre offering compare to Onduo (Sanofi/Verily/Dexcom), Livongo, One Drop, and Virta’s connected care offerings?

Q: Will Omada build a team of in-house HCPs for prescribing CGM? To what extent will this resemble Onduo and Virta?

Q: What is the status of Abbott’s partnership with Livongo to use FreeStyle Libre Pro in Livongo for Diabetes members (announced in 2018)?