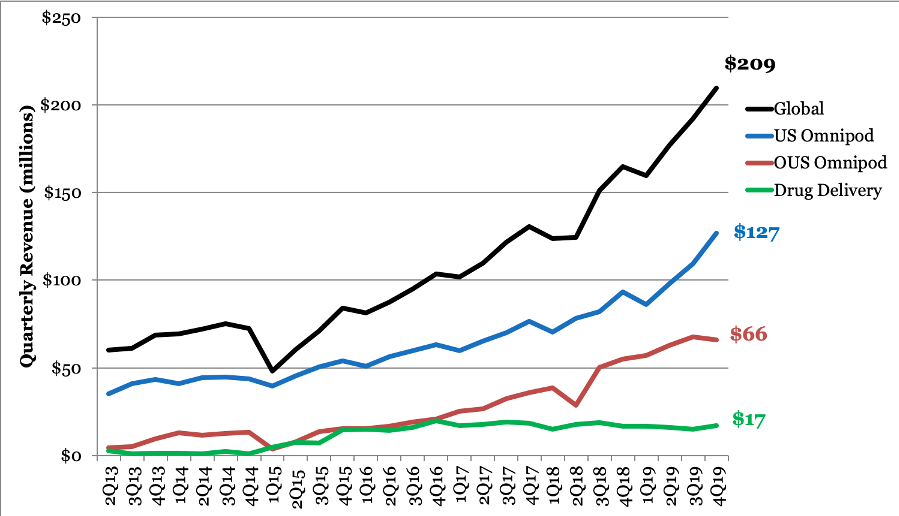 Insulet reported record global revenue of $209 million in 4Q19, rising 27% YOY on a tough comparison to 26% growth in 4Q18. Sequentially, sales rose a robust 9% from the previous record of $192 million set in 3Q19. US Omnipod sales drove three-quarters of revenue growth in the quarter, rising 36% YOY to $127 million. This is the highest share of growth driven by US Omnipod sales since 2Q18. The 27% YOY growth in 4Q19 is the company’s sixth consecutive quarter of >20% growth, impressive consistency! CEO Shacey Petrovic reported “over 80%” of new users coming from MDI, a slight increase from the 80% figure that’s been shared historically.

Insulet recorded its sixth consecutive quarter of profitability, with net income totaling $5 million. For the full year 2019, Insulet reported a net income of $12 million, up from $3 million in 2018 and a net loss of $27 million in 2017. Gross margin stayed about even (down 0.1%) with 3Q19 at 64%, though lower from 66% in 2Q19 and 67% in 1Q19 – that’s unsurprising in our view given DASH as an “extra” that patients need to cart around (and that needs to be manufactured). Mr. McMillan noted that US manufacturing costs were “higher than in Q4 than planned,” though this was partially offset by increasing volume (and net margin) through the higher revenue pharmacy channel. Full year gross margin was 65%, down 0.6% from 2018, impacted by investments in Insulet’s US manufacturing lines. Insulet ended 4Q19 with $435 million in cash, down from $637 million at the end of 3Q19. As a reminder, in 3Q19, Insulet completed an $800 million convertible note raise in the quarter; most of the proceeds were used to re-purchase existing notes. Another $210 million was spent this quarter to re-purchase the remaining notes (due in 2021). Insulet got the new notes (due in 2026) at a very attractive interest rate – just 0.375% - compared to the prior notes that were due in 2021 at 1.25% interest. Mr. McMillan must be busy.

After Insulet’s first highly automated manufacturing line came online in 2Q19, the company is now ramping up production. A second line is now installed, with “sellable product” expected by “mid-year.” A third line is also planned to come online in 2020, with sellable product “next year.” The new automated lines are part of a $200+ million investment to move Insulet’s global headquarters to Acton, MA. The new lines will drive redundancy in the supply chain and are expected to be “a key driver” to Insulet ultimately reaching its 2021 goal of 70%+ gross margins. We wonder what price will do over this time as well as access programs.

Now in its third quarter of availability, Omnipod Dash made up a majority (“approximately 55%”) of new patient adds, up from ~50% in 3Q19 and “more than one-third” in 2Q19. This is a pretty impressive rate of adoption and good news for Insulet as Dash generates higher revenue per user. Dash growth continues to be “in line” with pharmacy access.

2. International Rollout Begun in UK and Netherlands; Broader Rollout in Europe and Canada in 2020

Omnipod Dash began launch in the UK and Netherlands at the end of December, and rollout across Europe and Canada is expected this year. No specific countries or timelines were given, but in the past, Insulet has said they will focus first on current geographies. Of note, Insulet is also planning to launch Omnipod in five new markets in Europe and the Middle East later this year. None of these launches are expected to “add meaningful revenue” in 2020. While management said that Insulet’s European business is already doing quite well, we do note that currency as well as challenging comparisons slowed the growth in 4Q19 – while launching Dash will likely help boost sales somewhat, Horizon will be the real key.

Following the announcement at JPM that the pivotal for Horizon began at the “end of December,” Ms. Petrovic shared that “about 8,000 patient wearing days” have been collected. Over the course of the three-month, n=240 trial, “about 21,000” days are expected to be collected, meaning the trial is ~38% complete. The trial includes participants 6-70 years old and pre-pivotal data will be presented at ADA 2020. Data from the pivotal is expected “later this summer” and will be shared “either in publication or at a conference later this year.” So far, Ms. Petrovic characterized feedback as “frankly, emotional, and gratifying.”

Insulet continues to support Omnipod integration with Tidepool Loop – the vision of an interoperable AID app accessible through the Apple App Store and compatible with many ACE pumps and iCGMs. Insulet was the first Tidepool Loop partner, and Omnipod Dash’s interoperable ACE Pump designation (FDA cleared in September) was a critical step towards this vision. At ADA in June, both Dexcom (G6 iCGM) and Medtronic (future ACE Pump and iCGM) signed on to integrate with the app.

3. Lilly U500 and U200 Omnipods On Hold; Bandwidth Re-Directed Towards “More Attractive Opportunities”

In the first update on concentrated insulin Omnipods, Ms. Petrovic shared during prepared remarks that Insulet is choosing to focus on other opportunities. Specifically, Insulet is choosing to prioritize its limited bandwidth on “AID development efforts with our sensor partners” – presumably, getting Horizon integrated with FreeStyle Libre 2 will take some major work on both sides. During Q&A, Ms. Petrovic emphasized that there was no issue with “the data itself or product itself” with concentrated insulins, but rather a result of shifting priorities: “It is about essentially having to make the tough choices as a leadership team that we have to make. I think a great thing about Insulet is that we are in a position to have multiple growth opportunities and programs and potential steps that we can take in front of us, and our job is to make those tough decisions and prioritize the ones that we think are going to drive the most value for the organization.” We were surprised to hear this since type 2 is clearly a priority – there has been something odd about lack of movement on this front for so long.