Tidepool will submit Loop to FDA, the DIY iPhone app for automated insulin delivery; a paradigm shift for the field? – October 8, 2018

This morning, Tidepool announced plans to eventually submit Loop – the do-it-yourself (DIY), open source automated insulin delivery (AID) app for iPhone – to the FDA. The non-profit’s goal is to make Loop available as an officially supported, FDA-regulated product, rather than the current DIY app that works with out-of-warranty Medtronic pumps, Dexcom’s G4/G5/G6 CGM, and Medtronic’s older Enlite CGM. Tidepool aims to make Loop broadly available on the iOS App Store, compatible with commercially available, in-warranty, interoperable, integrated insulin pumps (iPumps) and CGMs (iCGMs). The current thinking is to submit Loop under a de novo iAlgorithm/iController pathway, allowing users to download it and run AID on their smartphone with interoperable devices. (See April’s JDRF/HCT Interoperability Workshop for more on this lingo.)

This news has major implications for the future of automated insulin delivery, including for patient choice (ability to mix-and-match AID components, bolus from phone), for how companies choose to develop AID products (build AID systems in-house/partnership vs. supply interoperable components that work with Loop), and for the regulatory path in AID (iController, dosing direct from the iPhone/Watch).

The refreshingly candid blog post does not give a timeline to launch an FDA-regulated Tidepool Loop app, though we asked CEO Howard Look directly if a launch in “~2-4 years” is feasible. He shared the following, which we appreciate as a very responsible view that is wary of “over-promising”:

“It would be premature and irresponsible to set precise expectations for a date. Demonstrating safety, usability, and efficacy are going to be paramount for this to be successful. That said, I hope it is sooner than your estimates. We have a big head start, because Loop exists today and is being used by likely over 1,000 people. The FDA is supportive of using real world evidence of existing Loopers to show safety and efficacy.” We aren’t sure whether he means sooner than the more ambitious two-year estimate or the conservative four-year estimate.

Indeed, Tidepool has already made some significant moves on the safety/efficacy, regulatory, and interoperability fronts:

True to its founding, Tidepool plans to share everything it does openly, including all of interactions with the FDA, its quality system, Loop’s source code, and its project plans – see its documents page here. This is incredibly valuable! “We hope that this will help other companies and projects going forward,” asserted Mr. Look, and indeed, the interactions seem like they could be incredibly valuable for the field.

We see today’s news as an enormously positive development for the entire diabetes technology field and for people with diabetes. This marks the first real move towards FDA regulation and commercialization of a DIY open-source AID algorithm, with many significant competitive implications highlighted below. This also could represent a disruptor to the established path of launching and commercializing AID, with major strategic consequences for companies. 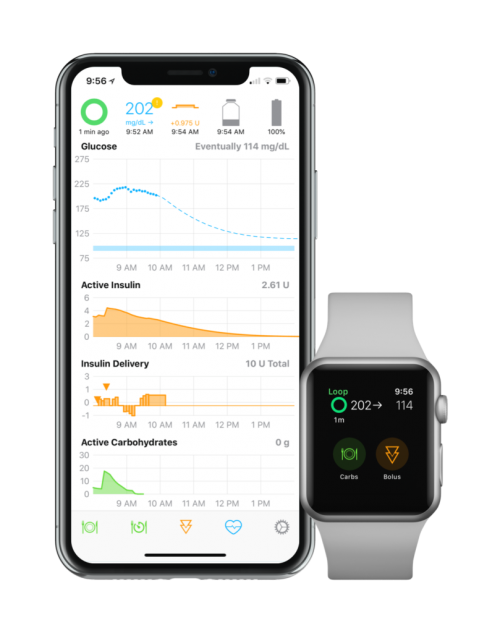 The data below shares Adam’s CGM results from the 90 days immediately prior to using Loop in fall 2016 (left) and the most recent 90 days (right). It’s critical to note here that with Adam’s low-carb eating, Loop has driven little benefit during the day (Kelly points out there is not too much room for improvement!); nighttime is where the biggest benefit has been. Overall, Adam and Kelly note that Loop is substantially less diabetes effort, guessing, and stress relative to what they were doing pre-Loop – in short, it delivers better outcomes with less work. The plots below for Adam show a tightening in all CGM values at all time points with Loop, though this does not show up in overall standard deviation. Adam’s time-in-range (70-140 mg/dl) has improved by one-hour/day on Loop, though this undersells the true quality of life benefit he has experienced. Depending on the open-loop period compared, the benefit has been more like 3-4 extra hours per day in range with less hypoglycemia. Adam was in the hospital for five days last month with a ruptured appendix, where he wore Loop and it worked flawlessly. As well, many patients can see even more improvement because like Kelly their starting Time in Range is much lower than Adam’s!

Immediately Prior to Loop (July-October 2016):

What Could Tidepool Loop Mean for Industry?