Kicking off another earnings season, J&J provided its 2Q18 update this morning in a call led by CEO Mr. Alex Gorsky and newly-appointed CFO Mr. Joseph Wolk. Click for the press release and presentation slides. Read on below for major highlights on the therapy side as well as the device side.

Worldwide sales of SGLT-2 inhibitor Invokana (canagliflozin) dove 27% YOY to $215 million, which reflects the lowest quarterly revenue for the franchise since 2014. This was an easy YOY comparison, as sales fell 23% YOY in 2Q17 to $295 million. In fact, 2Q18 marks the sixth consecutive quarter of double-digit decline for Invokana, Invokamet, and Invokamet XR (fixed-dose combinations with metformin). Sequentially, global franchise revenue fell 13% from $248 million in 1Q18; this was another easy comparison, as sales dropped 7% sequentially between 4Q17 and 1Q18. By geography, US Invokana sales totaled $169 million in 2Q18 (another low point since 2014), diving 34% YOY from $256 million in 2Q17. Sequentially, US revenue dropped 17% from $204 million in 1Q18. Meanwhile, OUS sales of canagliflozin products totaled $46 million, rising 18% YOY from $39 million in 2Q17 and climbing 5% sequentially from $44 million in 1Q18. This performance continues trends we’ve seen over the past ~two years, with the Invokana business struggling in the US while OUS revenue holds steady or grows slightly. It follows that J&J management continues to blame pricing pressure, which is particularly strong around diabetes drugs in the US. 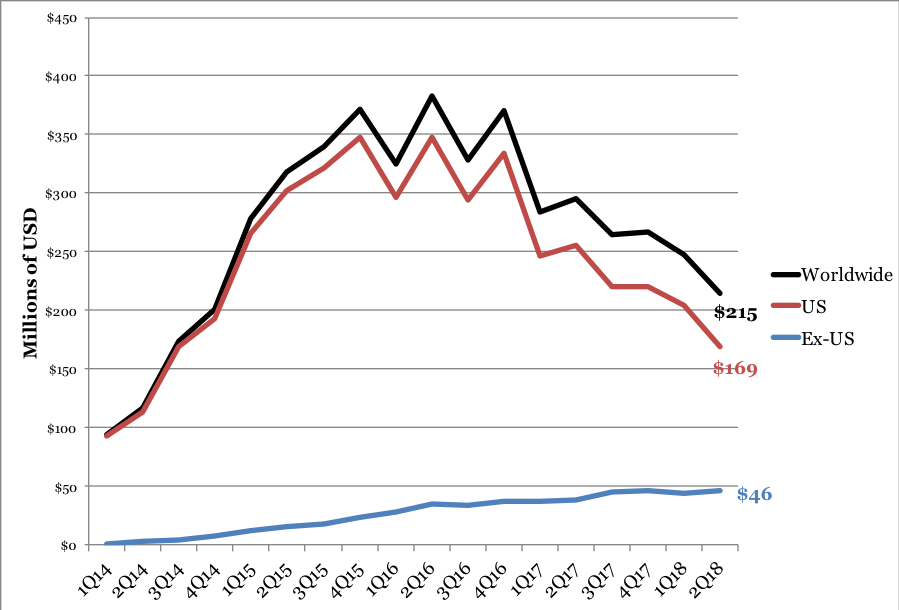 2. Invokana Shows Renal Protection in CREDENCE! Trial Stopped Early Due to Clear Demonstration of Efficacy; Surprisingly, No Commentary from J&J

In tremendously exciting news, the CREDENCE renal outcomes trial for Invokana was stopped early this week because of a clear demonstration of efficacy (update: see full results and WCN presentation from April 2019) – we were a bit surprised and disappointed not to hear anything on this from J&J. In the past, management has pointed to CREDENCE as an upcoming bright spot, one that could favorably tip the benefit/risk profile for Invokana. This is the first major renal outcomes study to report for an SGLT-2 inhibitor (while the renal data was positive in CANVAS and EMPA-REG, everything related to the kidneys was a secondary outcome in these earlier CVOTs), and it could give J&J a head start over other SGLT-2 manufacturers in promoting renal benefit (most thought leaders seem to believe renal protection is a class effect). We’d love to know what J&J’s plans are for getting CREDENCE data on the label; when will they file with FDA, and what indication will they seek? Presumably, the company has saved on clinical trial costs by ending CREDENCE ~one year ahead of schedule (the trial was expected to complete in June 2019, according to ClinicalTrials.gov). This is a huge win – and opportunity – for J&J. Amputation concerns have dominated the conversation around Invokana since last year, when FDA issued a black box warning on all canagliflozin products (in May) and CANVAS confirmed this amputation signal (at ADA in June). J&J now has more evidence to focus attention on Invokana’s CV/renal protective effects. Even if lower limb amputation is a risk inherent to the canagliflozin molecule, it’s important to keep in mind that the overall rate of amputations was low in CANVAS and it’s low in the real world, meaning the positives outweigh the negatives and patients could still benefit immensely from Invokana. We hope management’s silence doesn’t imply a weaker company commitment to diabetes, and we won’t read too much into this since we understand J&J has many products and different business segments to discuss on its earnings calls. That said, we have previously noticed some signs of wavering focus on diabetes: During Pharmaceutical Business Review Day, CEO Mr. Alex Gorsky underscored that Invokana is a “very small piece,” comprising only ~4% of total pharmaceutical sales. During J&J’s 2Q17 update, Mr. Gorsky assured that the company “remains very interested, and wants to make sure patients continue to have options in type 2 diabetes,” but then added, in the same breath, “we also recognize the competitive nature of the category.” These statements don’t exactly inspire confidence... Nevertheless, we remain optimistic about Invokana’s future growth prospects following this early stop to CREDENCE. We look forward to seeing full results from the outcomes trial (no timing has been shared). Hopefully, Invokana will have a new CV indication on its label by year-end as well, and the one-two punch of CV and renal protection could boost volume and sales.

3. No Updates on Diabetes, Obesity, NASH Pipeline or Partnerships

J&J’s early-stage pipeline features two GLP-1/glucagon dual agonists, a CB1 inverse agonist, and a PYY agonist, though none of these candidates came up on today’s call. A phase 2 trial of the company’s more advanced GLP-1/glucagon dual agonist, JNJ-64565111, was launched in April 2018, and aims to enroll 440 patients with obesity. The study’s primary outcome is percent change in body weight over 26 weeks of treatment (three doses of the study drug vs. placebo vs. Novo Nordisk’s GLP-1 agonist Saxenda), and it’s expected to complete in March 2019 according to ClinicalTrials.gov. In our view, this phase 2 trial represents a strong sign of J&J’s commitment to obesity as a therapeutic area; the company has also invested substantially in the Janssen Human Microbiome Institute, which is searching for earlier intervention opportunities in treating type 2 diabetes, prediabetes, and gestational diabetes (there’s a core obesity component to the Institute’s work as well). No active studies for the other three candidates in the table below appear on ClinicalTrials.gov. In collaboration with UCSF, JDRF, and others, Janssen’s Disease Interception Accelerator (DIA) initiative is working to identify biomarkers for type 1 and gestational diabetes. Again, there was no mention of this in any of J&J’s prepared materials, but it is a good sign of the company’s ongoing commitment to diabetes and to metabolic disease more broadly.

The table below reflects the latest updates, as far as we are aware, on Janssen’s diabetes/obesity pipeline products.

Global LifeScan/Animas sales of $355 million declined 16% YOY as reported and 18% operationally. The challenging performance also came on an easy comparison to 2Q17, when sales of $421 million decreased 10% operationally YOY. Global LifeScan/Animas revenue has now declined or remained flat for 25 straight quarters (~six years). Revenue increased 5% sequentially, albeit from a record-low base of $339 million in 1Q18. As we’ve come to expect, the slide deck (slide #11) cited Animas pump discontinuation last October, BGM price declines in the US, and category and share softness in EMEA as contributors to the poor performance. J&J reported a $3 million diabetes asset impairment in net earnings. This business has faced a perfect storm of industry trends (rising CGM penetration, falling price for BGM), and did not deliver on enough innovation to stem the tide (automated insulin delivery, digital/human coaching and feedback, insulin titration, etc.). Can Platinum Equity turn LifeScan around as a privately held company? 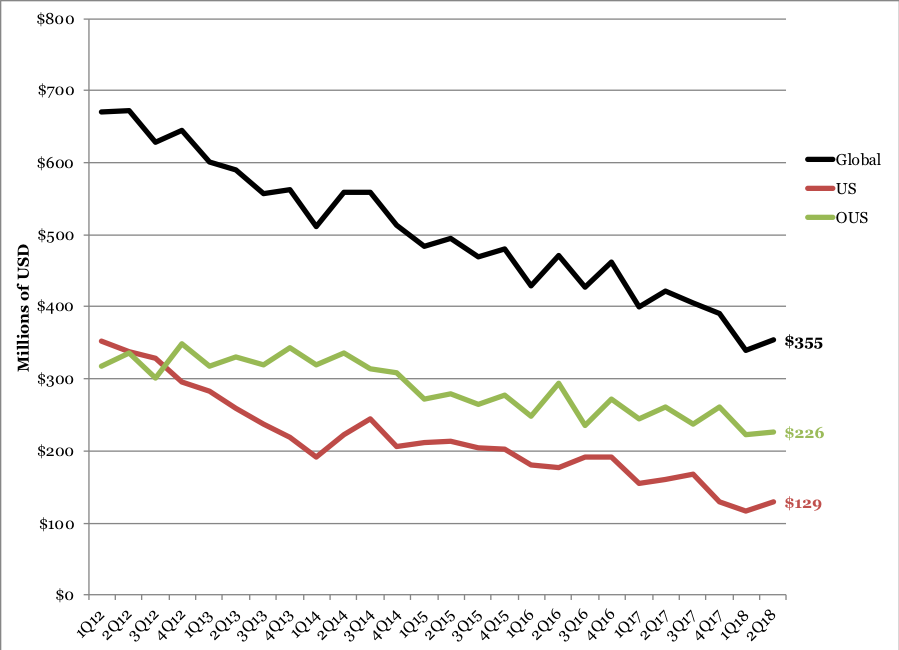 US revenue of $129 million decreased 19% YOY on an easy comparison to a 10% decline in 2Q17. US sales have now declined YOY for 13 consecutive quarters, including five straight quarters with a double-digit decline. As noted above, the entire business has been hard hit, but the US has played a bigger role (nearly double) in the worldwide business’s absolute decline over the past seven years. Sequentially, US sales increased 10% in 2Q18, albeit from a record-low base of $117 million in 1Q18.

International sales of $226 million fell 13% YOY as reported and 16% operationally on an easy comparison to 2Q17, when sales declined 11%as reported and 10% operationally. International revenue has now declined YOY for all but one of the past 16 quarters (four years) – the lone exception being 2Q16, when sales grew 5% on a very easy YOY comparison. Revenue increased 2% sequentially from a record low base of $222 million in 1Q18.

1. No Mention of CeQur’s Acquisition of Calibra Finesse (OneTouch Via) Announced Hours Before the Call (US Launch in Mid-2019)

There was no mention of CeQur’s acquisition of Calibra Finesse (OneTouch Via) from J&J, announced three hours before the call this morning – see our detailed report. CeQur reported the news in a press release, with no corresponding acknowledgment in J&J’s press release, slide deck, prepared remarks, or Q&A. Acquiring the three-day-wear, bolus-only (2-unit), 510(k)-cleared, super slim disposable insulin patch device is a huge win for CeQur, and we’re delighted to see that this highly-anticipated product will finally make it into patients’ hands. A US launch under a new name is expected in mid-2019 via pharmacy distribution (another big positive) and with CeQur’s own US sales force. The Calibra device is already FDA-cleared with a very broad label: subcutaneous bolus insulin delivery in adults requiring insulin – meaning both type 1s and type 2s are likely to use it. CeQur will immediately begin transferring manufacturing equipment from the existing OneTouch Via plant in Puerto Rico to a “world-class” undisclosed contract manufacturer. No new FDA submission is needed, and J&J has already done some legwork with payers. Positive data was presented at ADA 2018, showing a robust 1.6% A1c reduction from baseline (n=278, 62 sites) that was similar to insulin pens (-1.7%), but with stronger patient and healthcare provider preference for Calibra. Financial details were not disclosed, although our team is speculating that CeQur paid J&J between $5 million and $20 million for Calibra.

2. LifeScan-Platinum Transaction to Complete by End of 2018; No Further Details Provided

The sole mention of Platinum Equity’s acquisition of LifeScan came during Mr. Gorsky’s prepared remarks, when he confirmed that the transaction is expected to complete “by the end of this year.” The agreement was briefly mentioned in the press release, but no further details were provided. The proposed ~$2.1 billion offer was first announced in March and later accepted in June. As of March, J&J Diabetes Care President Ms. Valerie Asbury was slated to continue leading LifeScan, with the goal of creating “a global standalone business… for continued investment in growth and innovation.” Presumably, Platinum Equity’s ultimate plan is to turn the LifeScan business around and sell it at a higher premium, although we can’t be sure. We wonder what Platinum will do with the business and how will it compare to what Panasonic/KKR has done with Ascensia. Read our deep dive of the offer here, including our thoughts on Platinum Equity, a leading private investment firm with a portfolio of 30+ operating companies and 200+ acquisitions since 1995. Platinum does not have much healthcare experience, which could be an asset or a handicap, depending on one’s take on where traditional glucose monitoring is going…