The company shipped 84 pumps in 1Q18, up 45% sequentially from 58 in 4Q17. In line with sales growth, pump shipments grew 121% YOY on an easy comparison to just 38 shipments in 1Q17. Notably, this marks the first positive YOY shipment growth observed since 4Q16. 916 pumps have shipped cumulatively since the launch in 2014.

In a long-awaited update following FDA submission in November 2016, Cellnovo spoke with the FDA in 1Q18 and opted to push back its 510(k) filing to Fall 2018. While this latest delay to US market entry isn’t a great sign and will presumably relegate launch to 2019 at the earliest, Cellnovo will update the filing to include the new Cellnovo System with Android (CE Marked in December, launched in January). In this system, the pump communicates via Bluetooth with an Android-operating handset, facilitating improved interoperability with CGM and AID. Given the company’s always-precarious cash position, slow FDA progress, and still-limited scale in Europe, launching in the US alone seems highly ambitious at this stage. Will Cellnovo find a partner?

As in past quarters, Cellnovo cited limited insulin cartridge production capacity with partner Flex as reason for restricted sales, but is “on track” to produce to demand in Q2. If this manufacturing saga truly does end before July, it will come over a 18 months following the initial hope to wrap up by the end of 2016. We previously estimated that capacity will be elevated from supporting 400 patients in a year to just under 5,000. The company believes unmet demand is “strong,” so we’ll be interested to see how much sales/shipments ramp once cartridge manufacturing is in place.

Cellnovo ended 1Q18 with €9.5 million (~$11.7 million) in cash, reflecting a ~€3.5 million cash burn from 4Q17. That leaves roughly ~two to three quarters of cash at the 1Q burn rate, though Cellnovo has yet to draw from a €20 million loan agreement made with the European Investment Bank in July 2017.

Prototypes are still in development, but Cellnovo expects its first in-human, three-day clinical AID trial in collaboration with TypeZero to begin in June. It would not be a surprise to see this delayed. The next step will be preparation for CE marking filing, presumably meaning a larger pivotal study. According to the press release, the integration phase by TypeZero was completed in 1Q18, although we have yet to learn what CGM is being used for the system (presumably Dexcom). As a reminder, Cellnovo’s pump is involved in two other potential AID systems, Diabeloop and PEPPER. At CES in January, Diabeloop told us it aims to launch this year in France, the Netherlands, and Sweden using either the Cellnovo or Kaleido (ViCentra) patch pump. 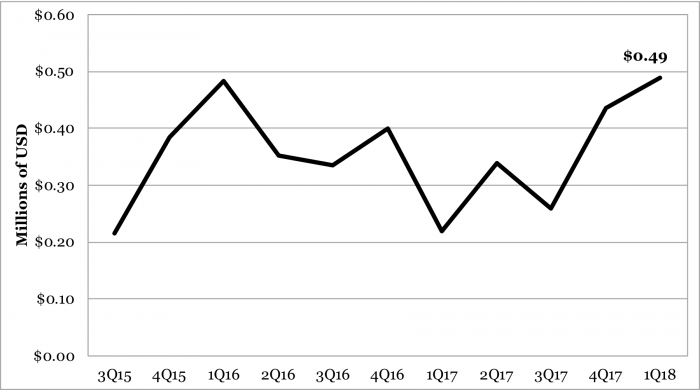