Early this morning, Abbott CEO Mr. Miles White led the company’s 3Q15 financial update. Below, we bring you our top financial and pipeline highlights from the call, followed by Q&A.

1. Global Diabetes Care sales totaled $275 million in 3Q15, down 8% as reported and up a mild 1% operationally year-over-year (YOY) against an easy. This was the third consecutive quarter of sales below $280 million, a trend not seen since 2005. Sales fell 1% sequentially from $278 million in 2Q15. Mr. White remarked in Q&A that the global Diabetes Care business will “surprise people” moving forward.

2. US Diabetes Care revenue of $98 million declined 4% YOY on an easy comparison (sales fell 16% in 3Q14). Sales have come in under $100 million in four of the past seven quarters; prior to 1Q14, sales had never fallen sub-$100 million in the past decade. Sequential sales did grow 5% against very a low base of $93 million in 2Q15 - the lowest ever in our financial model that dates back to 2004 when Abbott Diabetes Care bought TheraSense for $1.2 billion.

4. Pooled global revenue from Abbott and J&J totaled $748 million in 3Q15, down 13% relative to pooled revenue in 3Q14 ($858 million) which itself had been a decline. While recent currency headwinds have certainly not helped, continued pricing pressure and ongoing low-cost competition undoubtedly represent reasons for this market that appears to continue to be in freefall  – pooled revenues have fallen for 14 consecutive quarters. The peak of the blood glucose monitoring market was in 2011 – that year, pooled revenue for the third quarter for J&J and Abbott totaled nearly $1.0 billon.

5. CEO Mr. Miles White has great expectations” for the future of FreeStyle Libre. The company is “well along” a capacity expansion, though supply constraints persist and this is the first quarter we have felt we’re really getting the runaround – management has been saying it’s getting better for some time. Presumably the challenges reflect at least some uncertainty around the extent of manufacturing challenges (building a factory calibrated sensor at scale) as well as unexpectedly high demand. Notably, “it won’t be long” until FreeStyle Libre sales figures are reported – we’re glad to hear that, at least. We assume that could unofficially signal the end of the capacity constraints though it’s hard to say given that constraints could re-emerge from stronger than expected US demand.

6. Management continued its silence on the US timing of the consumer version of FreeStyle Libre (pivotal study complete). As a reminder, the blinded Pro version was submitted to FDA in 2Q15, and we assume an approval is still on track for 2016.

7. Though not mentioned on the call, Abbott has completed a study to expand FreeStyle Libre’s EU indication to pediatric patients. We assume parents can currently buy FreeStyle Libre for their kids online, so perhaps this is more for future reimbursement or healthcare provider confidence.

8. Abbott has not updated either of its two six-month outcomes studies for FreeStyle Libre reimbursement since June. REPLACE (n=210 type 2s on MDI, A1c>7.5%) and IMPACT (n=225 type 1s on MDI or pumps, A1c <7.5%) are both listed as “ongoing and not currently recruiting” participants.

9. Abbott has begun recruiting for a study of FreeStyle Libre Pro in the UK. The trial is examining time-in-range based on different frequency of FreeStyle Libre Pro wear. We assume this study could inform best practices for providers and payers, who might wonder, “How often should someone wear a blinded sensor to get maximum benefit?” A great question indeed!

10. There were no additional pipeline updates on FreeStyle Libre or other Abbott meters.

1. Global Diabetes Care sales totaled $275 million in 3Q15, down 8% as reported and up 1% operationally year-over-year (YOY). It tough to read into this “growth” considering the easy comparison to 3Q14 when sales fell 5% as reported and 6% operationally. For context, this was the eighth consecutive quarter of reported declines (since 4Q14). Performance was at the very low-end of management’s guidance from 1Q15 (low-to-mid single-digit operational improvement). It was equally disappointing to see global sales fall below $300 million again (see Figure 1 below). This was the third consecutive quarter of sales below $280 million (a trend not seen since 2005), and sales have been under the $300 million mark in five of the past seven quarters. Sequential sales fell 1% from an already low base ($278 million) in 2Q15. 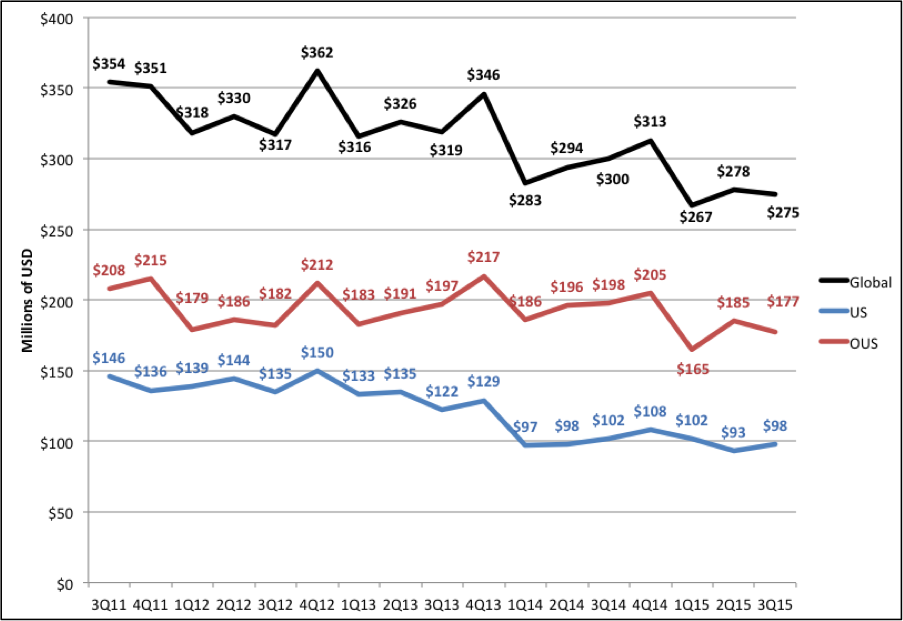 2. US Diabetes Care sales declined 4% YOY, totaling just $98 million in 3Q15. The quarterly performance ties the third lowest ever recorded for Abbott’s US business in our financial model (which stretches back over a decade). This, too, came on an easy comparison to a 16% sales decline in 3Q14.

3. International Diabetes Care revenue totaled $177 million, declining 11% as reported but growing 4% operationally, driven by sales of FreeStyle Libre. The comparison was modest at best (for this BGM environment), with revenue in 3Q14 growing 1% as reported and 2% operationally. As noted above, the reported financials do reflect the significant strengthening of the US dollar (negative 15% currency impact), and management emphasized that currency impacts are diluting international performance across all of Abbott’s businesses. Most people – from C-level execs to analysts on the call – seem to be taking a measured, wait and see approach for now.

4. Pooled global revenue for Abbott and J&J totaled $748 million in 3Q15, down 13% relative to pooled revenue in 3Q14 ($858 million) – that’s more than a $100 million drop! While some of the weakness to currency headwinds, that obviously cannot explain the entire drop – pooled sales for the two companies have now fallen for 14 (!) consecutive quarters, going far beyond the recent strengthening of the dollar. Presumably ongoing pricing pressure and ever-increasing low-cost competition explain the rest. 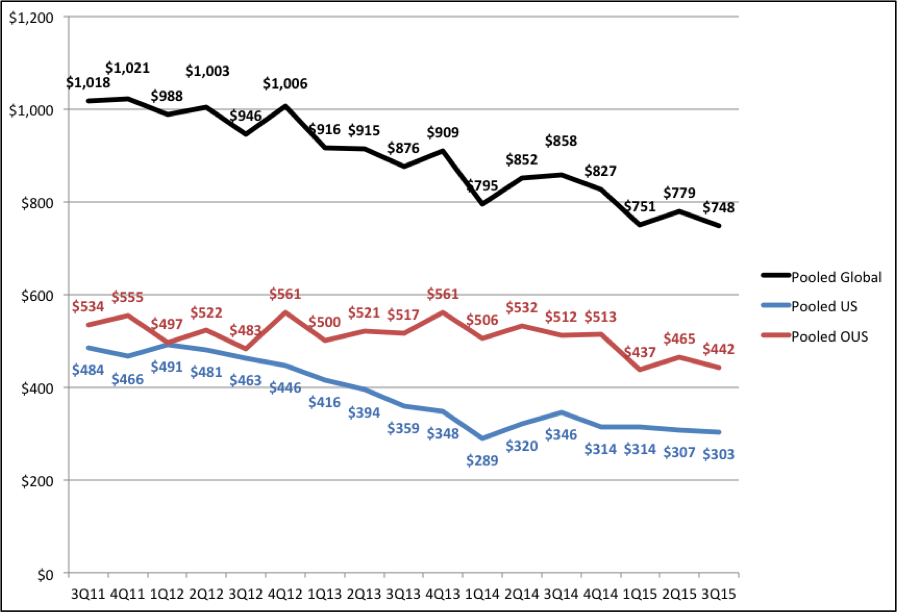 5. Abbott CEO Mr. Miles White shared significant optimism on FreeStyle Libre and commented on his “great expectations” for the future. Unfortunately, capacity constraints are still holding EU sales back. Mr. White said in Q&A that the company is “well along” an expansion. Obviously big demand is driving the shortage, though we wonder if manufacturing challenges are also responsible – how hard is it to scale manufacturing of a factory calibrated sensor? Per Mr. White, the company is close to meeting this demand, and once supply is unconstrained, we will be very curious to see what sales look like.

6. Management continued its silence on the US timing of the consumer version of FreeStyle Libre (pivotal study complete). The blinded Pro version was submitted to FDA in 2Q15, and we assume an approval is still on track for 2016. The company’s US pilot study of the Pro– which began recruiting type 2 participants in April (n=132) – did wrap up in August and results have not yet been posted.

7. Abbott has completed a study to expand FreeStyle Libre’s EU indication to pediatric patients. Study results have not been posted, and there is no official submission timeline. We assume it is currently possible to buy FreeStyle Libre online (no prescription is needed) and use it in children, so it’s hard to believe this will dramatically enhance sales (unless we’re missing something!). Perhaps this is for future reimbursement or simply broad confidence that it works in kids. Abbott VP Mr. Jared Watkins called a pediatric claim “a priority” at EASD 2014 over one year ago.

8. Abbott has not updated the two six-month FreeStyle Libre reimbursement studies since June. REPLACE (n=210 type 2s on MDI, A1c>7.5%) and IMPACT (n=225 type 1s on MDI or pumps, A1c <7.5%) are listed as “ongoing and not currently recruiting” participants. Completion was slated for December 2015 and September 2015, respectively. The goal of the type 2 study is to show a change in A1c at six months, while the type 1 study seeks to reduce time spent in hypoglycemia at six months. Both trials will compare FreeStyle Libre to standard SMBG. Reimbursement is critical around the globe and especially in Europe, where patients are less accustomed to paying out of pocket for healthcare.

9. Abbott has begun recruiting for a study of the FreeStyle Libre Pro in the UK. The study is examining time-in-range based on different frequency of FreeStyle Libre Pro wear. We assume this study could inform best practices for providers and payers, who might wonder, “How often should someone wear a blinded sensor to get maximum benefit?”

10. There were no additional pipeline updates on FreeStyle Libre or other Abbott meters. Abbott’s newest BGM (the FreeStyle Precision Neo) launched in April 2015. Management has alluded in the past to expanding the Flash Glucose Monitoring category to other areas, and the Pro version is the first of these. We wonder if a continuous version of FreeStyle Libre will ever be developed, though that could increase the cost, potentially increase the on-body size, and go against some of the principles that governed the original design of FreeStyle Libre. The other key area for expansion, as noted above, is connectivity. Could Abbott build the reader into a smartphone app? Could the reader improve in touchscreen design or add Bluetooth to talk to a phone app?

Q: Could you talk about your view on the sustainability of the Medical Devices business?

A: … I think there are some pretty solid good franchises out here because we positioned ourselves in the markets and market segments where the growth is. And part of that's emerging markets, and part of it's particular business segments where there's clear growth. I think we're going to see some of our businesses, like Diabetes Care, surprise people with some growth. I've got great expectations for FreeStyle Libre. As I mentioned, our capacity expansion there is well along. It won't be long before we'll be able to release sales of that product, which has been hampered by our capacity to produce. I think there are a number of things that will sustain growth for us, so I'm pleased with that. It's the things we can't control – like currencies and so forth – that are of greater concern. But we all have that problem and we're all facing it the same way.