See more on our top three highlights below, along with Adocia’s expected upcoming milestones: 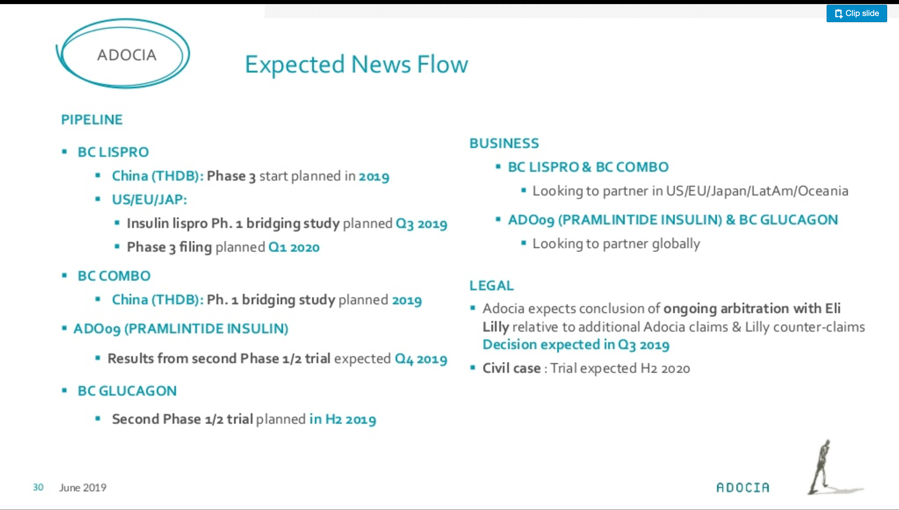 With positive phase 1 results announced in April, a 3-week phase 1b trial on the safety and efficacy of ADO09 in patients with type 1 is underway with results expected in 4Q19. Adocia characterized these phase 1 results as “excellent” in its press release. ADO09 is Adocia’s second pramlintide insulin candidate, with A21G human insulin replacing traditional human insulin in the co-formulation. The phase 1b trial was initiated in June 2019, and the primary outcome is the comparison between post-meal glucose profiles after bolus of ADO09 versus Novo Nordisk’s rapid acting insulin NovoLog. All participants will be given standardized mixed meals at the end of a 24-day long multiple daily injection of either compound. Phase 1 results shared in 1Q19 showed a statistically significant 85% reduction of blood glucose excursion over the first 2-hours post-meal vs. Humalog (p<0.0001). While Adocia’s first BioChaperone Pramlintide Insulin (7.5 U human insulin/45 µg pramlintide) showed a 97% reduction in the same outcome vs. Humalog in September 2018, the company has prioritized ADO09 to progress in the pipeline because of its faster than expected development plan. In their 1Q19 statement, Adocia mentioned that a 3-week phase 1/2 trial was deferred to begin in 2H19 from a projected 2Q19 start time slated when results were initially released.

2. BioChaperone Lispro Studies Starting in China, No Reference on Status in US/EU; No Update on BC Combo, iLet Closed-Loop, or Obesity Pipeline

No mention was made of BC Lispro’s phase 2 bridging studies after a delay was announced in 1Q19. However, Adocia and Tonghua Dongbao (THDB) are currently working on qualification requirements to start phase 3 trials in China and other territories. Originally, a phase 2 bridging study of ultra-rapid-acting BC Lispro was expected to begin in 2Q19 to prepare for phase 3 filing in the US/EU in 4Q19. This study to confirm the manufacturing quality of active pharmaceutical ingredients (APIs) was further delayed to 3Q19 in 1Q19. Adocia’s 1H19 report gave no mention on the current status of this phase 2 trial in the US and EU, and instead, only offered updates on the beginnings of the phase 3 trial in China.

The table below reflects the latest status, as far as we are aware, of Adocia’s diabetes/obesity-related pipeline products. Items highlighted in yellow indicate notable changes to the pipeline in recent months.