Senseonics reported 1Q20 financial results this afternoon on a call led by CEO Tim Goodnow and CFO Nick Tressler. See below for our top highlights. 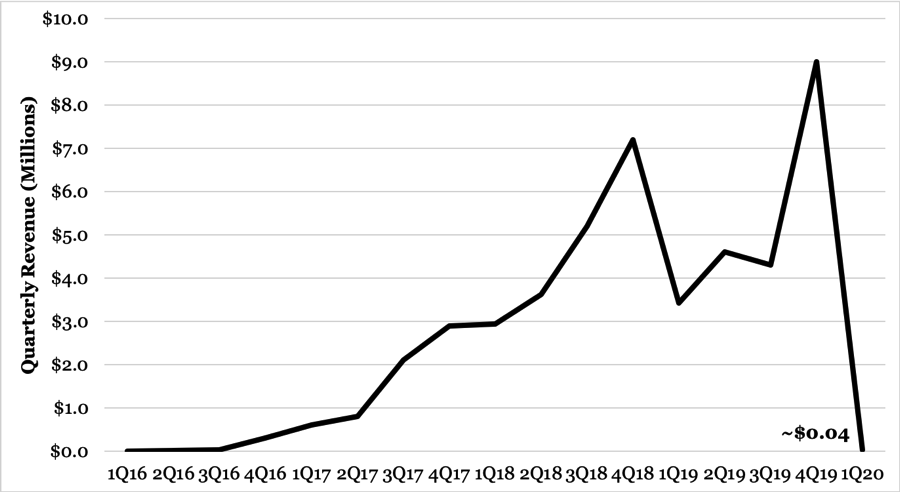 Senseonics reported global revenue of “$36,000” in 1Q20, declining 99% YOY from $3.4 million in 1Q19. The ~$36,000 in revenue is the company’s worst quarter of sales since 2Q16, Senseonics’ second ever quarter as a public company. A sales drop-off was certainly expected as Senseonics reported on its 4Q19 update that its international distributor Roche had considerable building in Eversense inventory and likely wouldn’t order new inventory in 1Q20; today, Senseonics reported just ~$12,000 in international revenue (i.e., orders from Roche). International sales of ~$12,000 represent a 99% YOY decline from $2.6 million in 1Q19. Of course, as with many distribution agreements, order timing can be choppy and vary greatly from quarter to quarter. Senseonics is expecting OUS sales to recover slightly in the remainder of the year, though still with significant impact from COVID-19-related shutdowns.

Senseonics continues to see momentum on the reimbursement front with total US covered lives reaching 171 million in the quarter. Recent significant wins include Cigna in February and several Blue Cross Blue Shield plans in May (the 171 million covered lives figure was accurate at the end of March and wouldn’t include coverage expansions in April or May). Additionally, Senseonics’ 1Q20 press release and CEO Tim Goodnow expressed optimism around Medicare. Mr. Goodnow stated that “six of seven MACs [Medicare Administrative Contractors]” have made positive determinations on Eversense coverage with access to the implantable CGM “in the same way as … for other CGMs.” Additionally, four of these MACs have made Eversense “immediately available” and Senseonics expects the rest to follow. During Q&A, Mr. Goodnow shared that all seven MACs would put total covered lives “close to 200 million,” putting the company well on track for its 2020 goal of >250 million covered lives. Lastly, Mr. Goodnow that the first insertions of Eversense for Medicare patients had occurred in the quarter.

3. ~$30 million in cash at end of April, enough to complete review of “strategic alternatives”; employee workforce cut by ~60%

As reported in March, Senseonics was forced to terminate a loan agreement with Solar Capital after breaching a loan covenant. Repayment of that debt, interest, and fees totaled $48.5 million and put the company in a difficult financial situation. As a result, the company hired financial and legal advisors to help explore “strategic options,” including potential sale of the company. Just a few days later, Senseonics also announced suspension of sales to new US patients and providers. At the end of 1Q20 (March 31, 2020), Senseonics had just ~$19 million in cash. In late April, the company entered a loan agreement with Highbridge Capital and received a $5.8 million loan from the Coronavirus Aid, Relief, and Economic Security Act (“CARES Act”). During prepared remarks, Mr. Tressler noted that Senseonics had ~$30.1 million in cash at the end of April. He also shared that this would be enough runway to get the company through its “review of strategic alternatives and beyond.”

As expected, the pivotal study for 180-day PROMISE study for Eversense XL has completed. Eversense XL will be submitted to the FDA “later this summer” and in addition to doubling the wear time to 180-days, the number of fingersticks calibrations will be cut in half from 2 per day to 1 per day. Mr. Goodnow also hinted at “other improvements,” including changes to the Eversense app’s user interface, but declined to specify any further. As we’ve seen with some early success in Europe, where Eversense XL is already available, we believe a 180-day product could drive a step-function change in uptake in the US market, especially given some of the groundwork with payers, prescribers, and patients already laid by the 90-day Eversense product.

During Q&A, Mr. Goodnow reaffirmed plans for a full-year (360-day) Eversense sensor in 2021. While he noted the company’s reorganization may push the launch out “a quarter or so” from the original timeline of “early 2021,” the company is still expecting to have a 360-day sensor launched in 2021. Later on, one analyst asked Mr. Goodnow whether Senseonics might see a sales inflection with the 180-day sensor or whether that might come with the launch of a 360-day implantable product. Mr. Goodnow replied that sales would likely see “continued improvement with each elongation.”