2. As in 2Q16 (F1Q16), the company did not break out sales for Actos (pioglitazone) – we expect sales and prescriptions of the TZD agent have continued to fall. That said, we’ve heard interesting positive endorsements of pioglitazone from many diabetes thought leaders at recent conferences, including Drs. Silvio Inzucchi, Jay Skyler, Robert Eckel, George Bakris, and Robert Ratner.

3. On the pipeline front, a Nesina/metformin fixed-dose combination was approved in Japan in September 2016, and the company also has an Altos-partnered drug for gastroparesis (ATC-1906) in phase 1.

Nesina (alogliptin) sales grew 12% year-over-year (YOY) as reported but fell 7% in constant currencies to $114 million (11.6 billion JPY). Sequentially, sales of the DPP-4 inhibitor dropped 13% from a base of $123 million (13.3 billion JPY) in 2Q16. By geography, the drug did well in Europe/Canada – revenue nearly doubling YOY in constant currencies to $14 million (1.4 billion JPY) – and in emerging markets, where revenue rose a remarkable 68% YOY operationally to $13 million (1.3 billion JPY). On the other hand, sales were sluggish in Japan and the US, Takeda’s largest diabetes markets. In Japan, revenue declined 3% YOY as reported and 19% operationally to $75 million (7.7 billion JPY). In the US, revenue declined 15% YOY operationally to $12 million (1.2 billion JPY). While 3Q16 was a challenging quarter for Nesina, other agents in the DPP-4 inhibitor class had stronger performances: (i) Merck’s Januvia (sitagliptin) franchise experienced an essentially flat quarter against a very tough comparison; (ii) Lilly/BI’s Tradjenta (linagliptin) franchise grew 22% YOY in constant currencies; and (iii) Novartis’ Galvus (vildagliptin) rose 6% YOY in constant currencies. We’ll be back with a whole class analysis on DPP-4 inhibitors after AZ reports Onglyza (saxagliptin) franchise sales on November 10. Since there was no mention of diabetes during the call itself, we haven’t heard management’s take on the near-future for Nesina, but we’d be curious to learn more about the company’s strategy. DPP-4 inhibitors continue to be extremely useful diabetes drugs – these products showed class growth in 1Q and 2Q16, and their favorable safety and tolerability profile makes them agents of choice for many patients, including the elderly and individuals with renal impairment. The graph below depicts trends in Nesina sales since 4Q10. 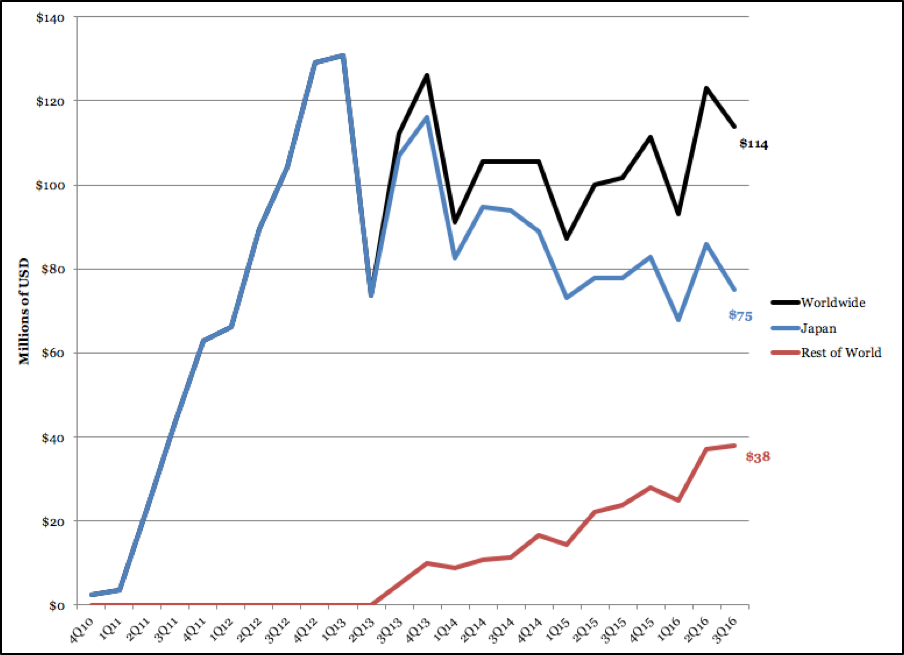 As in 2Q16 (F1Q16), the company did not break out sales for Actos (pioglitazone), indicating waning sales and prescriptions of the TZD agent. Takeda ceased reporting ex-Japan Actos sales in 4Q15, followed by the decision in 2Q16 not to break out Actos revenue for any region. This was not entirely surprising to us, as Lilly similarly stopped breaking out Actos sales in 1Q16 and as there have been several significant high-profile safety controversies related to the agent and the TZD class as a whole (from bladder cancer, to heart failure, to bone fractures). The drug also lost patent exclusivity in 2012. Moreover, Actos seems to be difficult to prescribe, contributing to and exacerbating negative perceptions of the agent among HCPs. We’re not so quick to write-off pioglitazone, especially because of its now-generic status and the all-important low-cost feature that comes with that. We’ve heard positive endorsements of pioglitazone from many diabetes thought leaders of late, and we wonder if the uptick in discussion might signal a renewed popularity for pioglitazone – that said, we’d expect most prescriptions would be for generic formulations.

On the pipeline front, a Nesina/metformin fixed-dose combination (FDC) was approved in Japan in September 2016, and the company also has an Altos-partnered drug for gastroparesis (ATC-1906) in phase 1. The FDC of alogliptin/metformin is approved in the US under brand name Kazano, and Takeda first submitted the combination to Japan’s regulatory agency in September 2015. We look forward to seeing if the FDC boosts sales for Takeda diabetes in Japan – we imagine it will have a definite positive impact, as combination products are driving DPP-4 inhibitor franchise growth and whole class growth. We’re also excited to see the company working on a treatment for gastroparesis, a common and often-overlooked diabetes complication with severe symptoms. The phase 1 candidate is very early-stage, of course, but Takeda hopefully has the resources to push the drug (an oral dopamine D2/D3 receptor antagonist) through clinical development, as gastroparesis begs for more research focus and viable therapies – we were pleased to see Allergan’s recent acquisition of Motus Therapeutics and its commitment to advance the gastroparesis candidate relamorelin in phase 3 following positive phase 2b results. Lastly, as a reminder, Takeda terminated a distribution agreement for obesity drug Contrave (naltrexone/bupropion extended-release) in early August of this year, transferring all responsibility for the product back to former-partner Orexigen.