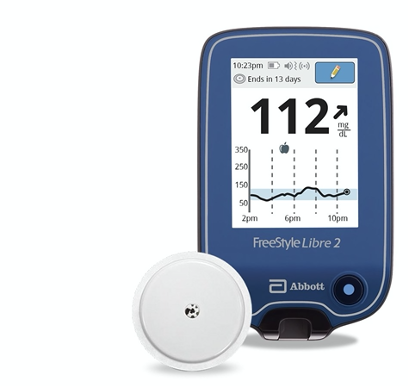 FreeStyle Libre 2 comes with a blue-colored reader (vs. a black-colored reader for FreeStyle Libre “1”), but otherwise appears more-or-less identical to the first-generation system. On the reader, users can toggle and specify alert thresholds, between 60-100 mg/dl for hypoglycemia alerts and 120-400 mg/dl for hyperglycemia alerts, in addition to alerts when signal between the sensor and reader is lost. Alerts can come via sound and/or vibration (user preference), prompting the user to scan their sensor to grab the real-time glucose value and trend. We’ve gotten to see the alarm set-up process for FreeStyle Libre 2 and it looks very intuitive and user-friendly.

Implications for Abbott and Competition

For Abbott, FreeStyle Libre 2 is only building on an already massively successful franchise that shows no signs of slowing down. FreeStyle Libre delivered $604 million in revenue in 1Q20 and now has a global user base of “over 2 million” people. In the US alone, we last estimated FreeStyle Libre’s user base at ~650,000 (a conservative estimate). With the addition of real-time alarms, improved accuracy, and device interoperability all with no changes to form factor or cost, we can only imagine more positive drivers for the already-upward trajectory for the FreeStyle Libre franchise.

In the table below, we’ve summarized the key features of all four approved standalone CGMs in the US. The yellow highlight denotes which system(s) has the advantage on a particular category; of course, this is our opinion and some is subjective!