Merck reported its 1Q16 update in a call led by CEO Mr. Ken Frazier yesterday morning. Please see below for our top five highlights from the call, followed by Q&A.

2. During Q&A, management announced that the company has decided not to submit once-weekly DPP-4 inhibitor omarigliptin in the US or Europe due to “business reasons.” These include the potential for cannibalization of Januvia’s market share and the company’s desire to commit greater resources to the SGLT-2 inhibitor ertugliflozin and a potential Januvia/ertugliflozin combination. Presumably if there were a better payer environment in the EU, there would be more justification to submit omarigliptin there.

3. Merck noted that clinical data for its SGLT-2 inhibitor ertugliflozin are “beginning to emerge” and expressed continued enthusiasm for an ertugliflozin/Januvia combination.

4. Management also shared during Q&A that the Samsung-partnered biosimilar insulin glargine candidate (MK-1293) is filed in Europe and that data will be released later in the year; we also learned outside the call that the estimated primary completion date of Merck’s phase 1 trial (ClinicalTrials.gov Identifier: NCT02269735) on “smart” insulin candidate MK-2640 has moved back to May 2016.

1. The Januvia (sitagliptin) franchise grew 1% year-over-year (YOY) operationally and declined 2% sequentially in 1Q16 to $1.4 billion. Standalone Januvia sales grew 3% operationally YOY and declined 2% sequentially to $906 million and Janumet (sitagliptin/metformin) sales declined 1% operationally YOY and 4% sequentially to $506 million. Notably, 1Q16 marks the first quarter in which Janumet performed worse than Januvia did – an unusual development considering the growing popularity of combinations. We will be curious to see if this contributes to a longer-term trend of DPP-4 inhibitor combinations performing worse than their standalone counterparts. Geography-wise, much of the franchise’s growth was driven by US sales, which grew 9% YOY operationally and 9% sequentially to $775 million (Januvia at $549 million and Janumet at $226 million). Ex-US revenues declined 6% YOY operationally and 13% sequentially to $637 million (Januvia at $357 million and Janumet at $280 million). Management provided a bit more nuance on this in the call, noting that the franchise saw strong growth in Europe and Japan, which was offset by emerging markets, including a significant impact by sales in Venezuela. According to management, excluding Venezuela, franchise sales grew 5% as reported outside of the US. The company vaguely pointed to “turmoil happening” in the Venezuela market and while no further details were provided, we would speculate that country-specific pricing pressure is a part of the decline in sales. Overall, the company expressed confidence in Januvia’s position within the class, highlighting the product’s dominant market share, and expressed expectations of continued global growth in 2016. Please see below for graphs on the Januvia franchise’s trends. 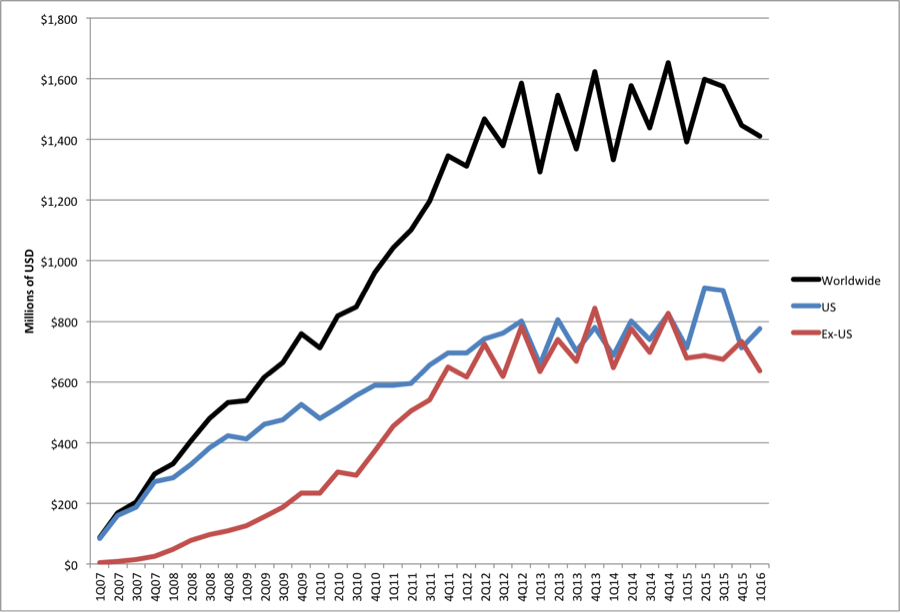 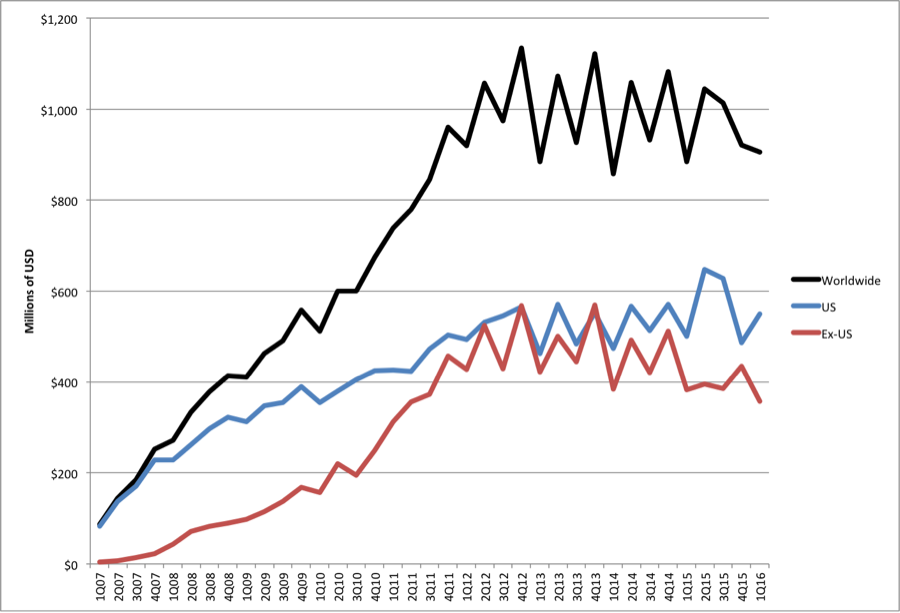 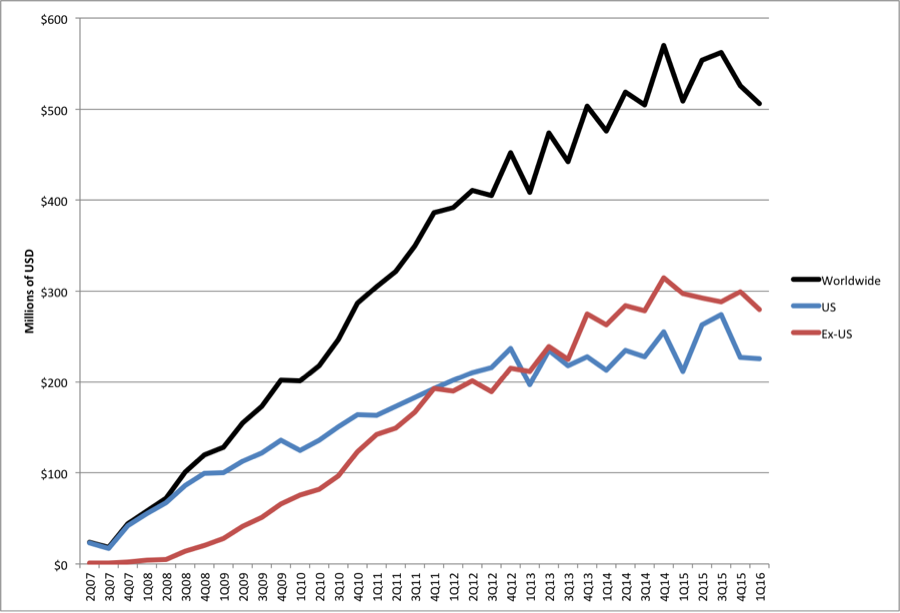 2. During Q&A, management announced that the company has decided not to submit once-weekly DPP-4 inhibitor omarigliptin in the US or Europe due to “business reasons.” Management emphasized that the decision was not driven by any safety or efficacy concerns, but rather two business reasons: (i) omarigliptin would “cannibalize” the company’s leading DPP-4 inhibitor market share; and (ii) the company decided to commit greater resources to the  SGLT-2 inhibitor ertugliflozin and potential Januvia/ertugliflozin combination instead of the once-weekly DPP-4 inhibitor, due to similar launch timing between the products. This came as a bit of a surprise to us, given that Merck had announced filing plans for omarigliptin in its 2Q15 update and omarigliptin’s recent approval in Japan in 3Q15. It was also not too long ago that the spotlight was on the candidate’s phase 3 results at both EASD 2015 and EASD 2014. Given the solid efficacy and potential adherence advantages of omarigliptin, we are disappointed to see the candidate discontinued, especially given how far omarigliptin made it through development. We wonder if Merck will consider licensing or partnering the candidate and suspect that more details on potential next steps may come later. This news once again highlights the rising bar for diabetes drugs and also points to the limited resources available in diabetes, even in a company like Merck that is heavily focused on the area. In our eyes, this business decision also demonstrates the growing appeal of the SGLT-2 inhibitor class, as management clearly deemed ertugliflozin to be the candidate with more potential moving forward. For more details from management on this decision, please see Q&A below.

3. Merck noted that clinical data for its SGLT-2 inhibitor ertugliflozin are “beginning to emerge” and expressed continued enthusiasm for a Januvia/ertugliflozin combination. During prepared remarks, management shared that these emerging clinical data will “support our comprehensive filing for this new molecular entity as both a single agent and in combination with Januvia or metformin by the end of the year.” While Merck did not provide specific details, Pfizer recently announced that phase 3 data on the candidate will be presented at ADA, with similar comments on filing timelines. Throughout Q&A, management repeatedly referred to a combination of Januvia and ertugliflozin as the company’s preferred project over omarigliptin (see highlight #2) and highlighted the combination as a promising one due to its dosing regimen. SGLT-2 inhibitors have clearly become a priority for Merck (likely due to the excitement around the class post-EMPA-REG OUTCOME that showed at least one SGLT-2 significantly reduced CVD risk) and we agree that it is a smart investment for the company, given its strong leadership in diabetes. In 1Q16, the SGLT-2 inhibitor class as a whole grew 42% YOY to $528 million compared to $373 million in 1Q15.

4. Management also shared during Q&A that the Samsung-partnered biosimilar insulin glargine candidate (MK-1293) is filed in Europe and that data will be released later in the year, although no further details were provided. We would expect that these data include the candidate’s phase 3 trials in both type 1 and type 2 diabetes, which were completed in November and March 2015, respectively. As a reminder, Merck announced its commitment to regulatory filings of the candidate in 3Q15; the announcement was vague, but we would expect regulatory filings in the US in addition to Europe. This represents an exciting milestone for one of the first three insulin glargine biosimilars (the other two being candidates from Lilly/BI and Biocon/Mylan). As a reminder, Lilly/BI’s insulin glargine formulation Basaglar/Abasaglar is on the market in Japan and several European countries and will launch in the US after December 15, 2016 as per the terms of Lilly’s patent lawsuit settlement with Sanofi. Biocon/Mylan’s biosimilar insulin glargine is expected to be submitted in the US and EU in 2H16.

5. The DPP-4 inhibitor class, excluding Takeda’s Nesina (alogliptin), grew 3% YOY to $2 billion in 1Q16. Januvia continues to lead the market by value, followed by Novartis’ Galvus (vildagliptin), though Lilly/BI’s Tradjenta (linagliptin) likely holds a greater share of the market than our calculations indicate as Lilly’s reported revenue only accounts for a fraction of total sales for the product. While the DPP-4 inhibitor class may be losing ground due to greater competition from the SGLT-2 and GLP-1 classes and pricing pressure, we believe that DPP-4 inhibitors’ strong safety/tolerability profile and perceived familiarity by HCPs will keep the class as a major player with Januvia as its frontrunner, as shown by 1Q16’s overall YOY growth. In addition, combinations with metformin and DPP-4 inhibitors will likely keep the class in demand, providing greater convenience and adherence. We will be back later with a full DPP-4 inhibitor class analysis after Takeda reports on May 10.

Q: On the emerging markets, we see the numbers in the press release. Can you give us a little more flavor on what's going on in the different areas of China, Latin America, and others? How is it doing ex-Venezuela? Eastern Europe looked tough. How much of this is currency? And how much of this is just underlying stuff?

A: If you exclude Venezuela, sales in emerging markets ex-foreign exchange were up about 5%. And we're seeing good growth in countries like China where we had about 11% growth outside of foreign exchange. And we're seeing good success in the areas of vaccines, our diabetes franchise, and so forth. Where the pressure was, primarily was Venezuela, but obviously there's some turmoil that's happening in some markets, particularly in the Middle East that have some impact. If you look at emerging markets over time, there's been a slight decline in growth. But we still expect there to be growth as we move forward into the future.

Q: On Januvia, were there any inventory changes?

In the US, we had 9% growth vs. prior year. But the best way to understand that is to look at underlying volume growth, which was about 5% vs. prior year. And therefore we did see some inventory movement of Januvia. It's important to note that just like last year, the quarters will fluctuate to some degree from one quarter to the next quarter. But overall, across the year, we expect growth for the Januvia franchise.

Q: Can you just comment on omarigliptin? I thought I had read that you're not going to be pursuing this in the US and Europe.

A: With regard to omarigliptin, for business reasons, we decided not to move forward submitting the applications in the United States or Europe, and it did not result from concerns on efficacy or safety. It was really for business reasons, for two primary reasons. Number one, we have a very high share of Januvia in those markets. So a lot of the product would have been cannibalizing our own DPP-4 share. We have a 75% share in the US and a 65% share globally. The second reason is we are excited about launching not just the monotherapy SGLT-2 but also the combination of an SGLT-2 with Januvia, which we would have anticipated would have been launched not too far after omarigliptin. And in order to focus more on growing Januvia, we felt that the SGLT-2 monotherapy, and more specifically the combo with Januvia, was a better place for us to focus.

And if I could just say, this was a very hard decision for us. Omarigliptin has very desirable properties as a once-weekly DPP-4 inhibitor, nearly superimposable over daily Januvia. But as we indicated, you know, these decisions have to be made by putting our resources against those things that matter most.

Q: I wonder if you can just give us an update on your insulin glargine program. We were maybe expecting to see your pivotal data coming up with that program perhaps later this year, so an update there would be useful.

A: So with respect to insulin glargine, you'll be seeing data later in the year. We’re filed in Europe and going through the process of gaining approval for that MK-1293 molecule. Probably not much more to add to that.

A: I would add that our teams work very closely identifying potential combinations and uses. And with regard to having to own them all, I don't think you have to, particularly if they can't be combined into a similar dosage form or have the same type of dosing regimen. And I get asked that all the time in diabetes for many years, where people said don't you have to have an insulin and a GLP-1 for Januvia to be successful? And we've shown that Januvia can be successful even if we don't have some of those combinations. It doesn't mean that we don't want a GLP-1 potentially or other types of diabetes medicines, but we look at those as their own opportunities. At the same time, the reason that we think that the combination of our SGLT-2 with Januvia can be successful is because you can put them into one tablet with the same dosing regimen. So that's the way we look at the combinations, and I think that our strategy is a good one.

-- by Melissa An, Sarah Odeh, and Kelly Close