Medtronic reported 4Q18 (F3Q19) financial results this morning in a call led by CEO Omar Ishrak. Diabetes is slide #10, and below you’ll find Q&A and summaries of other financial and pipeline happenings not mentioned above. We’ll expect to hear more on the 670G international launch and future pipeline at Medtronic’s symposia at ATTD this week. 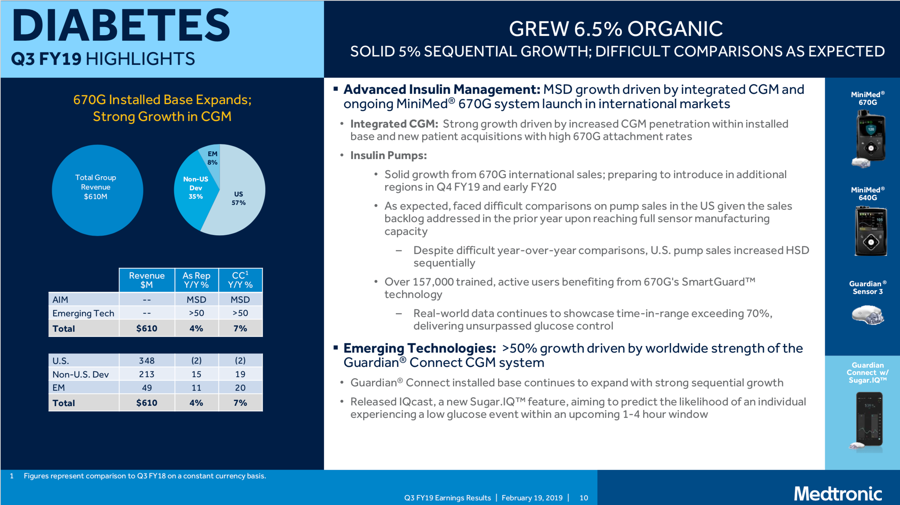 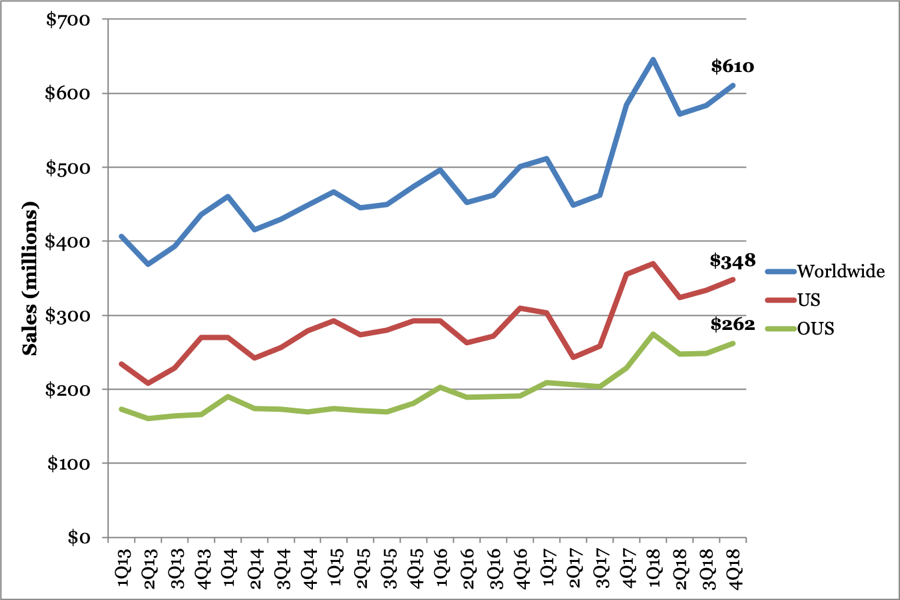 The below is taken mostly from Medtronic’s JPM presentation last month, with comments added based on any updates from today.

Q: I appreciate the fourth quarter commentary. How should we think about Diabetes heading into next (fiscal) year? Can this still be a high-single-digit growth business for Medtronic or should we start thinking more about mid-single digit as you anniversary the first wave of the 670G?

Hooman Hakami: Before talking about FY 2020, it's probably instructive to talk about the comps that we're dealing with in Q3, because this impacts Q3, it impacts Q4, and you've seen a deceleration in the year-over-year growth versus what we posted for the past four quarters. But we have indicated all year that we're coming up against of these more difficult comps.

And I'll just maybe call out a few of the critical ones. If you recall, in the back half of last year, we started to increase CGM capacity that allowed us to fulfill shipment, pent-up demand for both pumps and CGM that carried over from the first half of last year.

In addition, in Q3 of this year, we anniversaried Animas, and so all of the consumable revenue and all of the out-of-warranty conversions no longer provide a year-over-year benefit.

And then the third thing in Q3 of last year, we also had one of the last large commercial payers approve the reimbursement of 670G.

All of these three things distort the year-over-year performance in Q3, they’ll do so as well in Q4 and it's primarily a US dynamic. And maybe just to kind of point out some perspective, to give you a flavor for the impact of the comps – last quarter Diabetes delivered $583 million of revenue and we grew 27% (YOY). This quarter we're delivering $610 million of revenue which is 5% higher than was a quarter ago and our (YOY) growth rate is 6.5% and so hopefully that should give you a sense of the difficult comps. That's going to carry into Q4 and you heard the commentary from Karen for Q4, but from a growth rate standpoint, we absolutely expect Q4 to be the low point for Diabetes growth, we expect the comp dynamics to normalize, we expect the return to growth in Q1 of next year, and then for FY 2020 certainly the full year comp impact will normalize and we are very confident that Diabetes is going to grow above the corporate average as we indicated all along.

Q: I wanted to circle back to diabetes and touch on the breakthrough designation you got this morning for the Personalized Closed Loop. Can you talk about what the recently acquired Nutrino Health adds to this? When we might see data and approval of this in the US and outside the US? Is there new hardware involved on the CGM and pump side? And maybe touch on how this compares to where you think the competition is in next-generation systems?

Hooman Hakami: There's probably not enough time on this call to do personalized closed loop justice, but I'll give you a flavor for it. We really think that Personalized Closed Loop is going to be a system that truly paves the way for a true closed-loop system.

Now – and because of that – we don't feel that closing the loop is aspirational any longer. It's actually achievable. And if you really think about today's algorithms, they essentially behave the exact same way for every single patient even though every single patient is different.

Personalized Closed Loop changes all that. It's real-time system. It automates all facets of insulin delivery in a way that is personalized and adaptive to the user. In addition the system is going to provide unique insights to help the patient, help them with predictive diagnostics, which we think is going to dramatically simplify diabetes management. And so we really think this is going to be a transformative system. We're thrilled to have received breakthrough designation for it from the FDA.

As far as launch date goes and all of that, we just received the breakthrough designation. For competitive reasons, I think it would be premature to talk about launch dates, but what I will say – and you touched on this – is that we're investing heavily in Personalized Closed Loop.

Our acquisition of Nutrino was made with Personalized Closed Loop in mind. We are fully resourced from an R&D standpoint to drive this program as aggressively as possible and we're excited to share more details with you as we progress with the program. (Editor’s note – we had not previously felt that closing the loop was aspirational only.)

Hooman Hakami: Yea, so ADA 2020, I think, we will outline for you more details around Personalized Closed Loop for sure. And I think what you will see as we start to more articulate what the system is and what the capabilities are, you'll see that it will be completely differentiated with respect to what's out there today and what's also coming.