A paper recently published in Cell Metabolism – penned by Pennington Biomedical Research Center authors including current ADA Chief Scientific and Medical Officer and former head of Pennington Dr. Will Cefalu – demonstrated that a form of intermittent fasting in a small group of men with prediabetes (n=8) results in increased insulin sensitivity and beta-cell responsiveness, decreased blood pressure, and decreased appetite, even in the absence of weight loss. Despite the size of the trial, this was very encouraging to see.

Participants were randomized to either a control schedule (typical 12-hour feeding period) or an aggressive early time-restricted (eTRF) feeding protocol – the latter meant just a six-hour feeding period, meaning all food had to be eaten before 3 pm, with nothing after. The protocol was observed for five weeks, after which participants crossed over to the other regimen. Notably, both groups ate the same meals, though caloric quantity was customized to the needs of each participant to maintain body weight – this better isolated the temporal component of the eTRF intervention, which aims to align food intake to the time of day when metabolism is most active.

The authors write that this was the first human study of eTRF, though the method has protected against and even reversed progression of metabolic disease in mice with obesity and type 2 diabetes. This pilot certainly paves the way for larger trials, one of which will study eTRF in people with obesity (n=100) and includes secondary outcomes of fasting insulin levels, fasting blood glucose levels, and A1c. The trial is not yet recruiting, but we are eager to see whether fasting from 8pm to 12 pm the next day (a more typical 16:8 intermittent fasting approach that is much easier than eTRF) for 12 weeks improves cardiometabolic biomarkers. The two studies also differ in that the large RCT will measure weight loss as the primary outcome, while the small pilot was designed to validate weight loss-independent mechanisms of eTRF benefit.

Should larger trials read positive in people with obesity/prediabetes, eTRF could be another tool in the box against progression to diabetes, as well as to minimize glucose fluctuations in those who have diabetes. Perhaps it could even be administered through a Virta-like combination of nutritional coaching and continuous remote care. Fasting is easier to implement in those already eating low-carb/high-fat, and it can certainly help maintain nutritional ketosis for more hours/day. We’d like to see CGM used in trials like this though would not expect CGM to be used “real-time” in people taking on eTRF.

Similar to our questions about delaying or reversing diabetes in mice, we’re also curious about the potential for eTRF to reverse type 2 diabetes in humans. Further investigation into the molecular mechanisms behind these promising results could also lead to development of therapies that mimic the effects of eTRF to provide the same benefits without requiring quite such significant behavior change (which is certainly possible for some but probably isn’t a “population approach” though we’d be interested in how the authors feel about this). 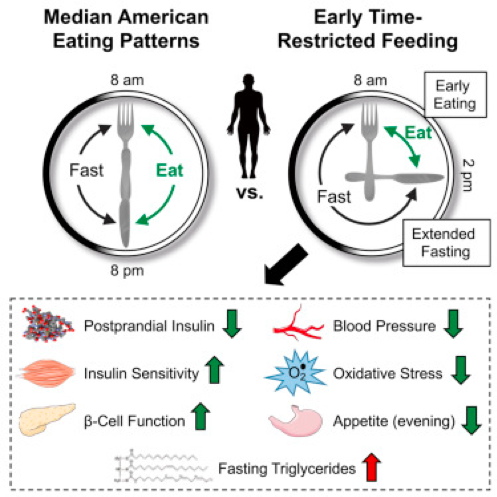