Early Wednesday morning, Roche CEO Mr. Severin Schwan led the company’s 1Q15 financial update. Below, we have for you our top highlights from the update followed by Q&A.

1. Global Diabetes Care revenue totaled 507 million CHF (~$539 million) in 1Q15, declining 6% as reported and growing 1% operationally year-over-year (YOY). Sequentially, worldwide sales fell 21% from 4Q14. This is the lowest quarterly revenue ever in our Roche model, which stretches back to 2004.

5. Roche has received FDA 510(k) clearance for its Accu-Chek Aviva Connect system (standalone meter + smartphone app + web portal). The system was submitted to the FDA in February 2015, reflecting a lightning fast FDA review of ~1 month. A US launch is slated for 2015.

6. Supplementary materials highlighted the 2015 worldwide launch of the Accu-Chek Active BGM. We’re not sure if the meter has been filed with the Agency.

7. There were no additional pipeline updates. Management did not comment on the development of Roche’s novel CGM or on the Solo MicroPump (Roche’s patch pump).

8. US sales of Lucentis (intravitreal ranibizumab) declined 3% YOY as reported and 9% in constant currencies to 394 million CHF (~$414 million) in 1Q15. Management highlighted the drug’s recent approval for diabetic retinopathy, which we expect may boost sales to some extent in the coming quarters.

1. Global Diabetes Care revenue totaled 507 million CHF (~$539 million) in 1Q15, declining 6% as reported and growing 1% operationally year-over-year (YOY). This is the lowest global revenue ever recorded in our Roche model, which stretches back to 2004. The  6% reported decline in 1Q15 came against flat performance in 1Q14. Operationally, the comparison was tougher (especially for the BGM business) to 1Q14, when sales grew 5%. This did mark the fifth consecutive quarter in which operational growth has been neutral or positive, indicating that the underlying business is growing very slightly in the face of a strengthening dollar. As a reminder, Roche was the only one of the Big Four BGM companies (J&J, Abbott, Bayer) that did not experience a double-digit YOY decline during some quarter in 2014. On the other hand, the company has not had a quarter with YOY growth above 3% since 1Q10, so a breakout quarter seems unlikely in the near-term future without a significant new product introduction or strategic change. Sequentially, worldwide sales fell 21% from 4Q14, in line with the ~17-26% sequential declines from 4Q to 1Q we’ve seen in the past three years. 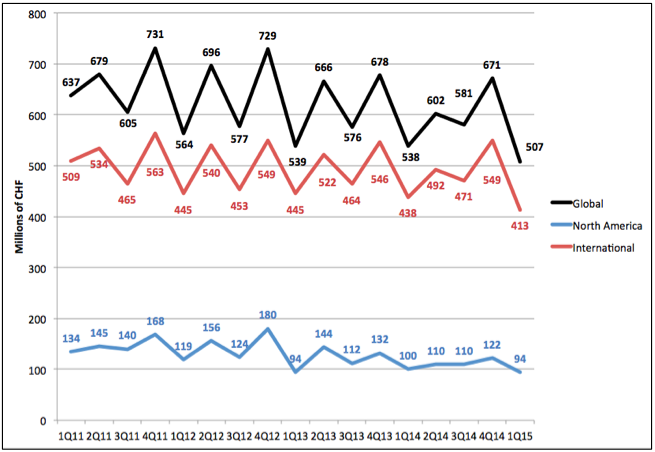 2. In North America, Diabetes Care revenue totaled 94 million CHF (~$100 million) in 1Q15, declining 6% as reported and down 11% operationally. This came against a tough comparison (again, especially for the BGM industry) as sales grew 6% as reported and 13% operationally YOY in 1Q14. In its prepared remarks, management did not comment at all on the North American business – the silence has been characteristic of recent Roche updates and is not surprising considering the consistent challenges. In the past 28 quarters (since 1Q08), Roche has recorded only four quarters of positive YOY reported growth in North America. Sequentially, sales fell 23% relative to 4Q14 – this is typical of the business’ seasonality, and actually the “best” sequential performance from 4Q to 1Q that Roche has seen since 4Q09-1Q10.

3. Outside North America, Diabetes Care sales totaled 413 million CHF (~$439 million) in 1Q15, falling 6% as reported YOY against an easy comparison (down 2%) in 1Q14. The performance breaks a string of two consecutive quarters of YOY growth for the business – the first time we had seen this pattern since 2010 (1Q – 2Q). Sequentially, sales declined a staggering 25% – this was not surprising given the high base as revenue tied an all-time high in 4Q14 (549 million CHF). As a reminder, Roche breaks out its non-North America revenue into two groups – Europe, Middle East, and Africa (EMEA) and Latin America, Asia-Pacific, and Japan (RoW). Sales were split roughly 67/33 between the two for sales outside of North America.

4. Combined global revenue for J&J, Roche, and Abbott totaled ~$1.3 billion, falling 7% relative to pooled revenue in 1Q15 (~$1.4 billion); offhand, we were hoping this would be a bit better, though the decline has been driven by the significant strengthening of the US dollar as opposed to US weakness – see below. The performance does come against an easy comparison as combined revenue declined 7% a year ago. Sequentially, global pooled revenues fell a staggering 18% relative to 4Q14 (when sales reached ~$1.5 billion). For context, J&J, Roche, and Abbott all fell 6% YOY, breaking a streak of three consecutive quarters in which Abbott had the weakest performance. On an operational basis, J&J (up 4% YOY) outperformed Abbott and Roche (up 1% YOY). As a note, it is difficult to make direct comparisons between J&J, Abbott, and Roche, given that each company’s Diabetes Care business includes a fraction of non-BGM revenue (J&J and Roche have global insulin delivery and Abbott has CGM and FGM outside of the US). We look forward to adding the last of the Big Four – Bayer – to this comparison when the company reports on April 30. 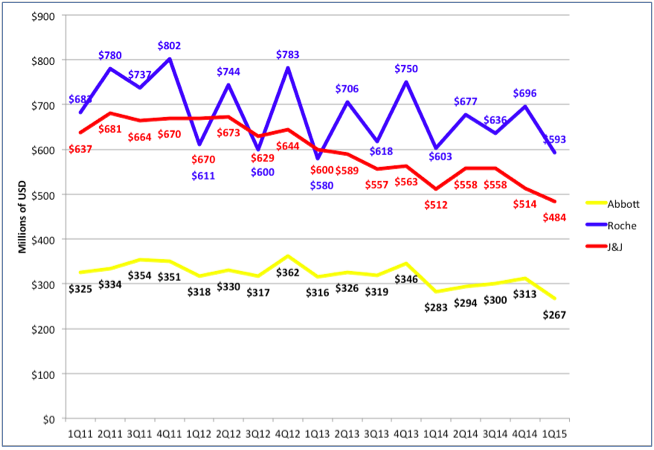 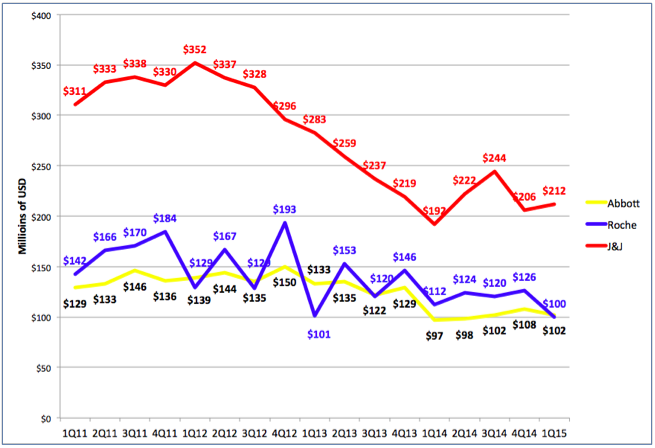 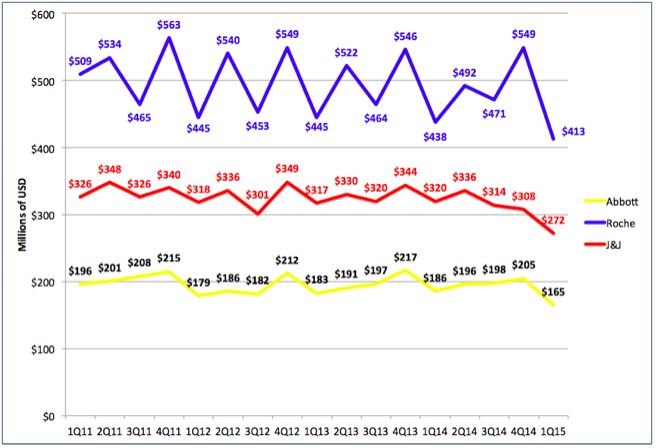 5. Though it was not mentioned during the update, Roche recently received FDA 510(k) clearance for its Accu-Chek Aviva Connect system (standalone meter + smartphone app + web portal). From the filing, the system seems to have been submitted to the FDA in February 2015, reflecting an impressively fast FDA review of just ~1 month. Notably, we have seen the length of previous FDA reviews vary from four months (iHealth Smart-Gluco Monitoring System) to 15 months (Philosys Gmate Smart) for similar smartphone/cloud-connected BGM. What appears to be record fast-processing time speaks to the FDA’s increasingly open approach to connected devices. Given the challenging BGM market, it is great to see Roche’s continued commitment to innovation. We applaud the company for really pushing the envelope on this front with three product launches in the past 12 months – very impressive, particularly given the pressure in the sector.

6. Just as they did in 4Q14, Roche’s supplementary materials (slide 162) also highlighted the 2015 launch of the Accu-Chek Active BGM (worldwide). As a reminder, 4Q14 marked the first time we had heard of the next-gen Active BGM. Once again, the slide deck provided few details on timeline or meter features (as is standard nowadays, the strips are no-coding). The first-gen Active BGM was launched in the EU in 2Q13 but never made it to the US market. Our search of the FDA database seemed to indicate that the meter has yet to be filed with the Agency; this would have to happen soon if a US launch is to be included in the 2015 “worldwide” launch.

7. There were no additional pipeline updates. Management did not comment on the development of Roche’s novel CGM, though at JPM 2015, acknowledged that the project is moving forward (“we feel we are in the race”). While hesitant to provide a strict timeline, we heard confirmation at JPM that commercialization is more than 12 months away. Roche plans to file the device in the EU before bringing it stateside (~18 months later), so we assume US commercialization would not occur before late-2017 at the earliest.

8. US sales of Lucentis (intravitreal ranibizumab) declined 3% YOY as reported and 9% in constant currencies to 394 million CHF (~$414 million) in 1Q15. Sequentially, sales declined 10% as reported. Management reiterated commentary from Roche’s 4Q14 update regarding the increased competition for Lucentis in diabetic macular edema (DME); the company also suggested that while the product’s overall market (which includes age-related macular degeneration as well as DME) has continued to expand, fewer patients have been switching from Avastin to branded medications than in past quarters. On the positive side, management highlighted Lucentis’ recent approval for diabetic retinopathy in patients with DME; that rollout is ongoing, and we expect the new indication will have a positive impact on sales in the next few quarters. The company suggested that the broad population of patients (those with both proliferative and non-proliferative retinopathy) enrolled in the diabetic retinopathy trials could be a useful differentiating factor for Lucentis; Bayer/Regeneron’s Eylea (intravitreal aflibercept), which received a diabetic retinopathy indication earlier this month, was only investigated in patients with non-proliferative retinopathy. As a reminder, Lucentis is marketed by Genentech in the US and by Novartis ex-US – see our Novartis 1Q15 report for an update on the drug’s international performance.

9. Roche’s GLP-1/GIP dual agonist RG7696 remains in phase 2 for type 2 diabetes. A phase 2 trial (n=105; ClinicalTrials.gov Identifier: NCT02205528) of the compound is currently recruiting participants. The 12-week study randomized patients with type 2 diabetes on background metformin to receive daily injections of RG7697, Novo Nordisk’s Victoza (liraglutide), or placebo. The RG7696 and placebo groups are double-blinded while the Victoza group is open-label. The primary endpoint is change in A1c from baseline at eight weeks; secondary endpoints include change in A1c, body weight, and fasting and post-prandial glucose at 12 weeks. Roche’s pipeline indicates that the first patient was dosed in 3Q14, and the trial is expected to complete in September.

Q: On slide 45, is there a reason you are treating Diabetes Care in a separate way than the rest of the Diagnostics business?