This morning, IDF published its eighth edition, 150-page Diabetes Atlas, and as we all feared, but expected, the pandemic has worsened in the past two years: By the Atlas’ estimates, there are now 425 million people in the world living with diabetes – that’s 1 in 11 adults ages 20-79 years old – a 2.4% increase from 415 million in 2015. More concerning, it has been estimated that half of these people, or 212.4 million, are undiagnosed. By 2045, IDF projects that we’ll be faced with a global burden of 629 million people with diabetes (1 in 10 adults). While this would still spell utter devastation for health systems and global productivity, it actually reflects an improvement from 2015, when researchers suggested that 642 million people could have diabetes by 2040. The prediction is now for 13 million fewer people, five years down the line. Perhaps this is a faint signal that we’re beginning to bend the curve (or will be able to), but clearly nowhere near enough and more likely, this reduction just reflects a change in methodology, which always seems to be moving around with IDF estimates. When we look at where we’ve been – there were ~30 million people diagnosed with diabetes globally in 1985, meaning we’ve seen 14x growth in the past 32 years – and where we are going, it becomes wholly apparent that we need to halt this train in its tracks by investing all-in on prevention.

From a financial point of view, an estimated one in eight global healthcare dollars ($727 billion, of which the US is responsible for 48%) went to diabetes in 2017. This is up from $673 billion in 2015, and just $232 billion in 2006 (more than tripling in 11 years). Our rough estimates show that, taking into account indirect costs, diabetes easily costs over $1 trillion. IDF conservatively projects that spending will reach $776 billion in 2045 – just ~7% growth, compared to 48% growth in global diabetes prevalence. In making the calculations, the authors assumed that mean expenditure per person and diabetes prevalence rate would remain constant.

With regards to mortality, the Atlas suggests that a person dies every eight seconds from diabetes (four million total in a year), actually an improvement from one every six seconds in 2015 – this may be chalked up to a global decrease in all-cause mortality though we’d think that it reflects just more methodology changes overall. Still, IDF President Dr. Shaukat Sadikot pointed out in a conversation with us last week that just because the overall number is not as bad as it used to be, the disparities in mortality rates between the US/Europe and the rest of the world are big causes for concern. Despite the decrease, diabetes is still a bigger killer than HIV/AIDS, tuberculosis, and malaria combined.

Unsurprisingly, China (114 million, +4% from 2015), India (73 million, +6% from 2015), and the US (30 million, +3% since 2015) sit atop the ranking for highest diabetes prevalence. By 2045, IDF projects 61 million new diabetes cases in India (+84% from 2017), and just six million in China (+5% from 2017) and the US (+20% from 2017). Our calculations show that India will have added the population of Denmark 11-times over in people with diabetes by the time 28 years have passed – this is a true disaster in progress. As for China and the US, we wonder if the projections might be an underestimate. JAMA reported in 2014 that 493 million Chinese adults have prediabetes, and nearly 90 million Americans have prediabetes as well – how in the world are these countries going to prevent a diabetes avalanche at this rate?

While India and China are without a doubt the biggest concerns in terms of population burden, 69% of people in Africa with diabetes are undiagnosed, compared to “just”38% in North America/the Caribbean. As a probable result, diabetes accounts for 77% of all deaths before the age of 60 in Africa. Africa is also expected to be a major driver of diabetes prevalence (+156% by 2045). On the whole, 90% of people with diabetes live in low- and middle-income counties, suggesting that an investment in poverty-alleviation is an investment in diabetes prevention.

IDF estimates that 352 million people – 7.3% of adults ages 20-79 years – have prediabetes as defined by the strict WHO definition of Impaired Glucose Tolerance (IGT). We trend past Atlas estimates below, which tend to vary and probably underreport the prevalence of prediabetes (as measured by fasting glucose and A1c). While the projection for people living with diabetes in 2045 increased, that for people living with IGT went up to 532 million from 481 million in 2015.

Thanks to Lilly, Merck (MSD, to be exact), and Novo Nordisk for sponsoring this venture. A recent press release announced that Merck and IDF will be teaming up further to focus on education and awareness-raising to facilitate prevention of type 2 diabetes. So far, the partnership includes a CME accredited, IDF-certified HCP course about prevention, as well as a joint awareness campaign to support women’s health today, World Diabetes Day.

At the Cities Changing Diabetes Summit in Houston last month, stakeholders from all over healthcare and policy (and all over the world!) committed to slashing obesity by a whopping 25% in cities so that diabetes rates go no higher than one in 10 (prevalence is one in 11 globally now). The Cities Changing Diabetes movement was implicated in this IDF report, which said that by 2045, cities will be home to ~75% of people with diabetes.

This data underscores the importance of prevention – we’re on the path to a truly unsustainable future. IDF concluded the report with a well-put call to action, asking that:

Certainly, we will not break through without meeting all three of these criteria, and learning from the things that do work well in prevention. Our hats are off to IDF for all of this work to bring to the surface every couple of years the unrelenting havoc that diabetes is wreaking on the world. As Dr. Sadikot writes in the foreword: “Diabetes is not a health crisis; it is a global societal catastrophe.” 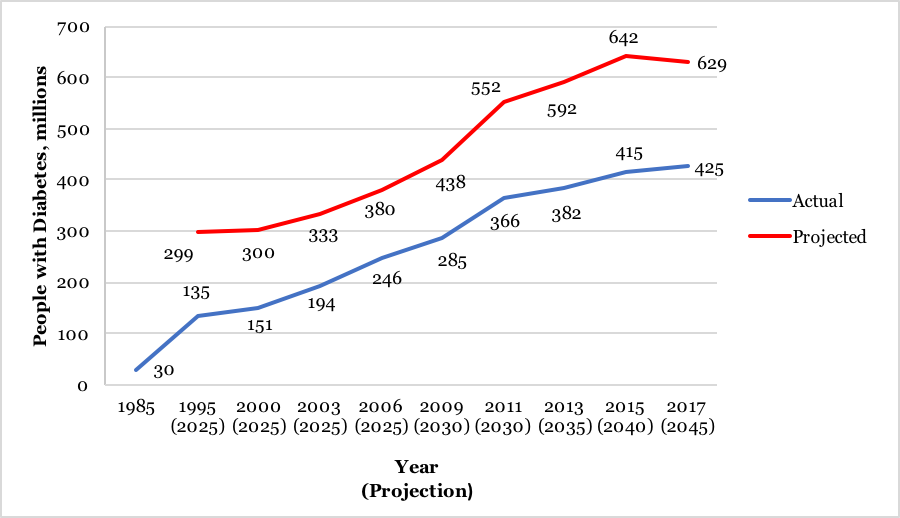 There are now an estimated 425 million people ages 20-79 with diabetes in the world, 10 million more (+2.4%) than in 2015. IDF estimates that there will be 629 million people living with this disease in 2045 (48% growth). On average, that equates to the diabetes load increasing by 7.3 million people each year – put that in the context of the past two years, where ~5 million people were added per year. Of course, the trend won’t actually be linear. On an ever-so-slightly encouraging note, the future prevalence estimation has actually decreased for the first time since we’ve been tracking: IDF previously guided for 642 million people with diabetes in 2040, and now they are projecting that there will be 629 million in 2045. That is the smallest of victories, and we’re not sure why, given the rising prevalence today, it went down. Perhaps epidemiologists have reason to believe that we can begin to bend the curve, though we undoubtedly have to do more, because preventing 13 million cases will do little in the grand scheme. Still, we’ll look at any decrease as favorable in today’s climate.

Figure 3: Mean Expenditure per Person with Diabetes by Region 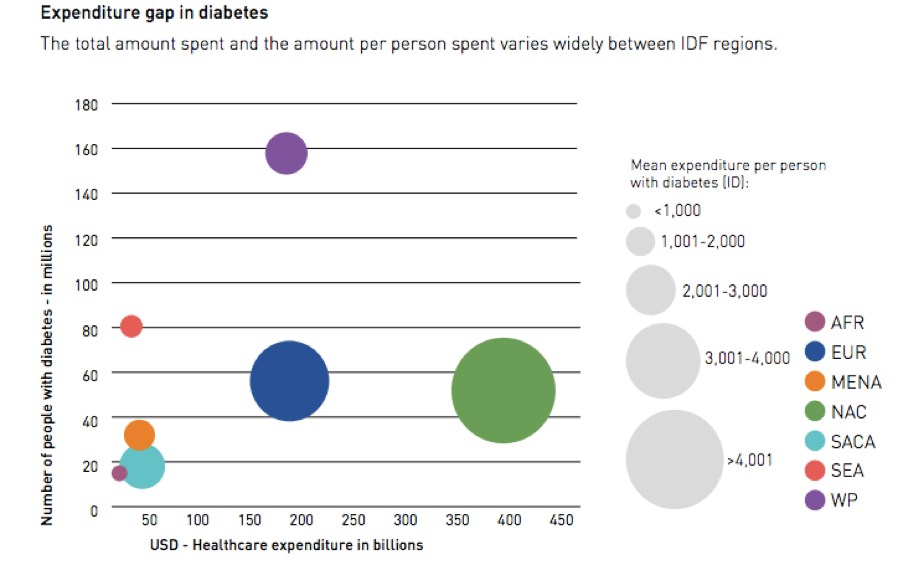 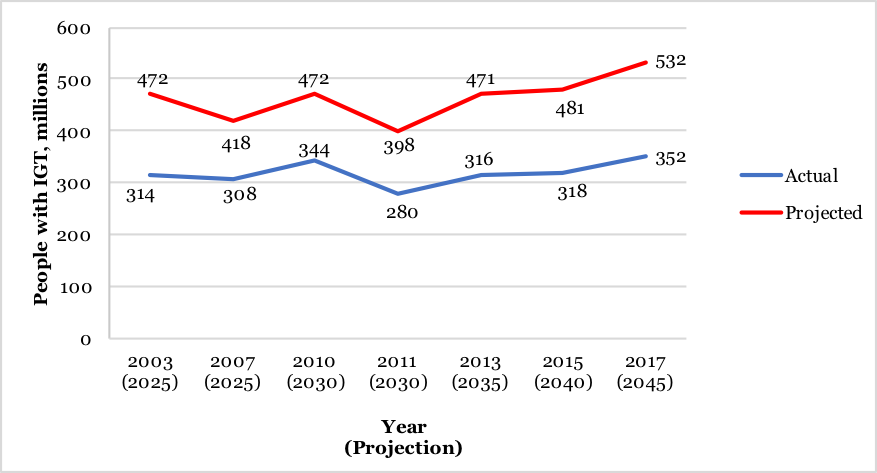 -- by Brian Levine and Kelly Close