This afternoon, Senseonics reported 2Q18 financial results in a call led by CEO Dr. Tim Goodnow. While it is early days, adoption seems to be ramping gradually in Europe and the US launch is underway following FDA approval in June. Read on for the top highlights from the call!

Senseonics reported record revenue of $3.6 million in 2Q18, up a strong 23% sequentially from $2.9 million in 1Q18. Sales quadrupled from 2Q17’s $0.8 million. Due to increasing Eversense adoption in the EU and “early commercial progress” in the US, management slightly increased 2018 guidance by $1 million on both ends of the range, forecasting full-year 2018 revenue of $19-$21 million – this represents triple 2017’s sales of $6 million. This also reflected a clear rise in optimism from the June call’s guidance for $18-20 million in sales (following FDA approval), when Dr. Goodnow said, “Anything more than that, I think would be a little too aggressive from where we sit today…” During Q&A, management emphasized that the guidance increase is anticipated to be driven by both US and EU performance. Still, Dr. Goodnow confirmed previous expectations for “modest” contributions from 2018 US Eversense sales. As he pointed out, while US Eversense patients inserted in August could return for reinsertions in November, any patients inserted in Q4 won’t be due for reinsertion until 2019. Given that Senseonics is still in the very early stages of its US launch, Dr. Goodnow explained that “it is just too early” to provide guidance for 2019. 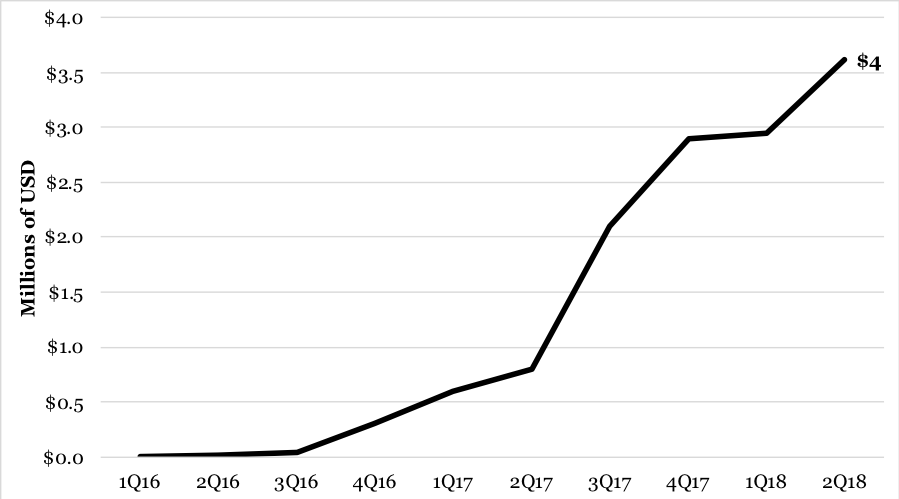 We estimate that the global installed base of Eversense users is currently between ~2,800-4,000 users, obviously driven by Europe right now. This figure is based on the end-of-Q1 estimate of 2,000-2,800 users and management’s comment that the installed base was up a robust 38% in the second quarter (we interpreted this as sequential growth). Insertion procedures grew 27% sequentially in the quarter, representing a slowdown from 40% sequential growth in Q1; that makes sense with more getting on the 180-day XL sensor. Indeed, the 180-day XL sensor is available in all OUS markets, and 70% of the base is already on it – the goal is to have all OUS patients converted to the longer-wear version by the end of 2018. XL has basically the same per-day pricing as the 90-day version, if not a little lower, according to management, and is still priced at parity with other real-time CGMs (estimated at $10-$12 per day, based on previous calls). Geographically, 75% of Q2 revenue came from Germany, Sweden, and Italy since they are all strong reimbursement markets (for example, 80% of lives are covered in Germany). To our surprise, distributor Roche has still yet to commercialize in France and other countries due to greater pricing pressures (per Dr. Goodnow). According to Abbott’s FreeStyle Libre press release announcing national French reimbursement, there are “hundreds of thousands” of type 1s and 2s who use insulin multiple times a day in France. Presumably the reimbursement discussions are taking some time in France, especially if FreeStyle Libre is the pricing comparator.

1. First US Insertions on July 31st (>80% from Dexcom); Avoiding Self CGM Insertions a Major Selling Point

Senseonics met its goal to have physicians insert the first US patients with Eversense on July 31st, commencing “National Eversense Freedom Week” with a focus on freedom from frequent CGM self-insertions. Though it’s one week into the launch, over 80% of these first US-based Eversense users were previously on Dexcom CGM (much higher than the ~20%-35% he’s previously cited regarding the European base). We’ll be watching this metric closely, as it would be a concern for Senseonics’ addressable market if it’s focused on former Dexcom/Libre users. US GM Mr. Mike Gill said, anecdotally, that a clinic visit for a G5 or Libre user is a branching point – providers tell them they can either upgrade to G6 (+three days of wear compared to G5) or stick with Libre (just FDA approved for 14-day wear), or switch to the 90-day Eversense – obviously this is a bit reductive on the features discussion, though we could see how the pitch might resonate with some. Earlier in the call, Mr. Gill told of a patient who “each week would be filled with anxiety knowing she would have to remove and insert another sensor.” Elimination of self-insertions and fewer insertions overall is clearly a selling point that this team will continue to hammer, also as they target the ~ six million individuals “on insulin alone or insulin and orals” – implicitly including type 2s – who have said “no” to other CGMs in the past.

As we reported yesterday, Senseonics has secured its first payer coverage for Eversense in the form of Horizon Blue Cross Blue Shield of New Jersey (BCBSNJ), which covers ~four million lives total. Mr. Gill confirmed on the call today that, though Senseonics looking to pioneer a wraparound, category III CPT bundle that would encompass both the supply cost as well as physician time, BCBSNJ has opted for now to go through DME providers along with the new CPT codes (0446T, 0447T, 0448T) for additional provider time associated with the procedures. According to management, payers have expressed a preference for the bundle – it was framed as more efficient, since the physician is the provider, rather than the DME company – but Senseonics is willing to support either approach. To that end, the company currently contracts with three “strategic fulfillment agents,” two of which fulfill DME orders and one of which is capable of providing sensors and supplies through the bundle. More strategic fulfillment agents are likely to come on board by the end of the year. How much of an advantage could this physician-focused reimbursement model be for Senseonics in the US CGM market? The big trend now is clearly pharmacy distribution, led by Abbott’s FreeStyle Libre, and potentially with Dexcom to follow given its 2Q18 remarks.

1. Single PMA Supplement for Non-Adjunctive Dosing and One Calibration Per Day to be Filed “Within a Month”; No Mention of iCGM Plans

In his prepared remarks, Dr. Goodnow announced plans to submit a single PMA supplement to the FDA “within a month” incorporating claims for non-adjunctive dosing and reduced calibration (one fingerstick/day). This timing could be viewed as a slight delay from Dr. Goodnow’s comments in June following FDA approval, when he anticipated filing the supplements with the Agency in the “next few weeks”; that said, given the initial approval six weeks ago, this is fairly rapid progress. On today’s call, Dr. Goodnow explained that Eversense’s “accuracy and performance have proven capable of the benchmark set by the Agency” for a non-adjunctive claim. Indeed, many at the FDA Advisory Committee (Adam included) noted that Eversense’s accuracy was well within the range of a non-adjunctive claim, so we don’t expect Senseonics will be met with much regulatory resistance. As for reduced calibration, we’ve already seen one calibration per day data demonstrating a very solid MARD of 9.5% in the PRECISE II pivotal study. Previously, we had heard that a second-gen Eversense with redundant glucose-sensing capabilities was intended to be factory-calibrated. However, it’s been over a year since we’ve received an update on this next-gen sensor, and today’s comments seem to imply that (at least for now) we’ll be seeing a one-cal per day version in the US first.

2. IDE Submission for 180-Day XL US Clinical Trial Expected in September, Ahead of Trial Beginning “In the Coming Months”; 365-Day Wear US Eversense Trial to Start in 1H19

During prepared remarks, Dr. Goodnow noted plans to submit an IDE for the Eversense XL in September, expecting a 180-day US clinical trial to begin “in the coming months.” This plan aligns with previous timing shared at Keystone for a US clinical trial to begin enrolling in mid-fall. Also at Keystone, we learned that the XL is expected to be approved in late 2019/early 2020, although we did not receive confirmation on today’s call. Given that the trial would run well into 2019, followed by a six-month FDA approval process, late 2019/early 2020 timing seems reasonable. In his prepared remarks, Dr. Goodnow also mentioned efforts to develop a one-year sensor, referencing “tremendous progress on the in-vivo stabilization out to the one-year timeframe.” He expects results “this fall” and anticipates the start of a 365-day trial in 1H19 (we assume in Europe). Dr. Goodnow expressed high confidence, claiming: “I now have every expectation that we’ll be looking at a one-year life of our highly accurate sensor within 2019.” We’d note, these remarks refer to a study-ready version of a sensor that we believe could be on the market in 2020 (assuming a one-year study followed by a six-month FDA review). At Keystone, a representative shared that the sensor itself will not require modifications; rather, the algorithm needs to be adjusted for extended wear. While 90-day sensor wear certainly offers substantial value-add to the seven-day, 10-day, and 14-day sensors currently on the market, we can only imagine the degree to which a one-year sensor could be paradigm shifting, especially with reduced calibration.

3. No Updates on iDCL Pivotal Trial with Roche/Senseonics/TypeZero or on Beta Bionics iLet Home-Use Studies

There were no updates regarding the EU pivotal trial of the Roche-Senseonics-TypeZero 180-day hybrid closed loop system, nor was there mention of the Beta Bionics iLet trials. At ADA, we learned that the NIH-funded iDCL pivotal trial is slated to begin testing patients in Europe in 3Q18, in line with Senseonics’ 4Q17 expectations to initiate the study in 2H18. At Friends For Life, Dr. Ed Damiano said the integrated iLet device’s home-use bridging studies (running from now until October) will begin testing Eversense in adults at MGH this month, in addition to ongoing studies Dexcom. The sole mention of these collaborations came during Q&A, when Dr. Goodnow responded to a direct question and confirmed partnership with Roche and Beta Bionics.

We were impressed by commentary from management on expanding the CGM segment. Both Dr. Goodnow and Mr. Gill acknowledged the benefits of multiple sensors on the market, emphasizing the ultimate goal of increasing patient access. See below for some notable quotes from the call.