IQVIA White Paper on Time in Range: Improving US Diabetes Population TIR to 70% Could Save At Least $2-$4 Billion Over Ten Years – November 7, 2019

Download; Up to $9.7 billion in cost savings for 80% TIR and 40% Reductions in Hypo; Uses IQVIA’s Core Diabetes Model to Assess Cost Savings; Why is it conservative?

Healthcare consulting company IQVIA published an exciting whitepaper today, “Advancing Glycemic Management in People with Diabetes,” focused on Time in Range (TIR). The 22-page paper describes the limitations of A1c, the benefits of measuring TIR with CGM, and estimated cost reductions if average TIR for people with diabetes in the US (type 1 and type 2) reached 70% or even 80%. The cost savings estimates range from $2.1-$9.7 billion over ten years (!), depending on the assumptions used within IQVIA’s Core Diabetes Model (read more below). Many of the assumptions are rightly acknowledged as conservative, leaving a lot of upside here to show even more meaningful, population-wide cost savings.

Momentum behind the “Beyond A1c” movement is at an all-time high – especially with the establishment of consensus TIR targets earlier this year – and we’re elated to see a move towards proving cost-effectiveness.

Cost Reductions if US Population Average TIR Reached 70% and 80% 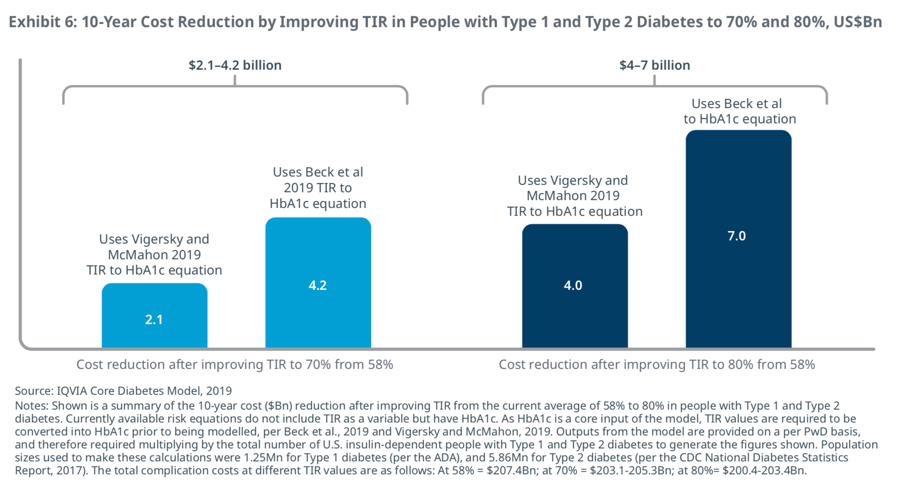 Using IQVIA’s Core Diabetes Model, IQVIA “conservatively” calculated cost reductions of $2.1-$4.2 billion over ten years if average population TIR reached 70%. These calculations were based on the assumption that the current average TIR for the US diabetes population is 58% - the authors rightly point out that this is the TIR seen in four large CGM studies, so it’s highly likely that average time in range is much lower than 58%. If average population TIR moved from 58% to 80%, the model estimates $4-$6.9 billion in total savings over ten years. Both of these cost reduction calculations came from improvements in complication rates. Further, if hypoglycemic events could be reduced by 40% in type 1s (often seen with CGM or AID), the paper estimated a further $2.8 billion in cost savings over ten years. Altogether, the model estimates that improving population TIR from 58% to 80% (type 1 and type 2), along with reducing rate of hypoglycemic events by 40% (type 1-only) could generate a total savings of $6.7-$9.7 billion over ten years! 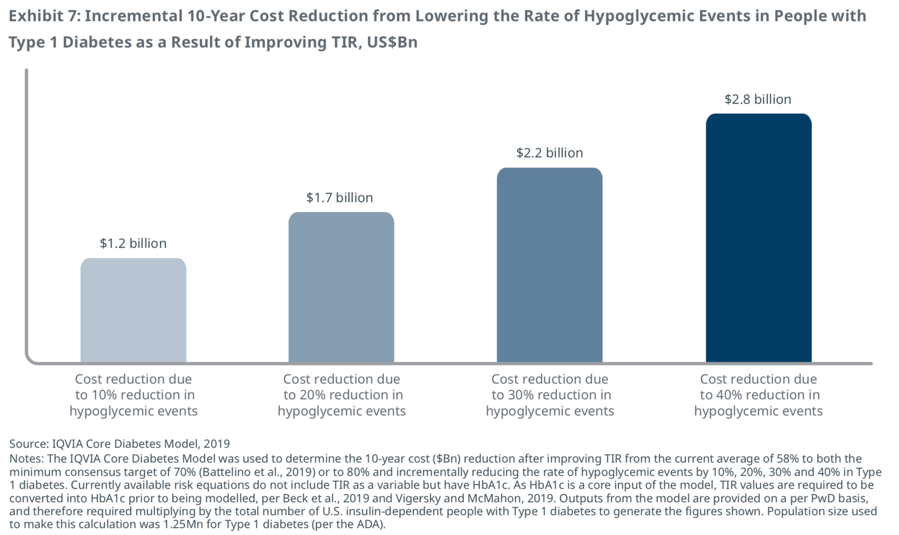 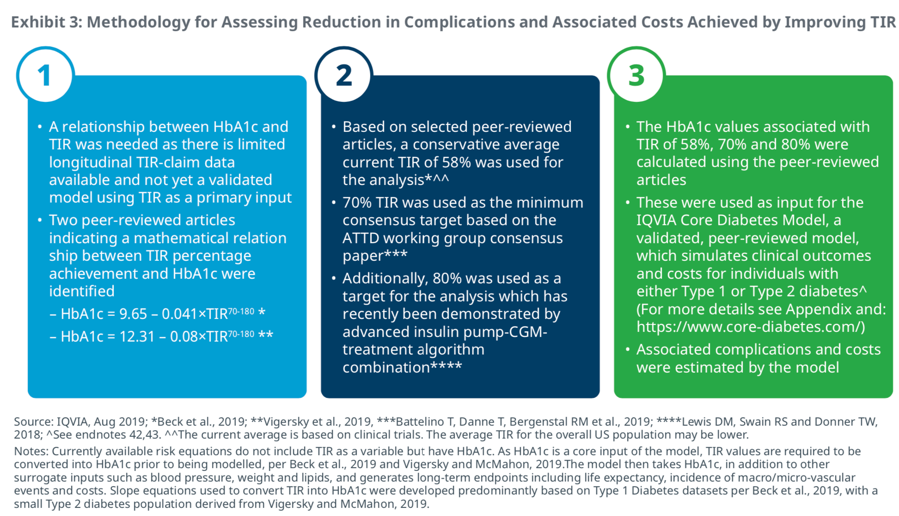 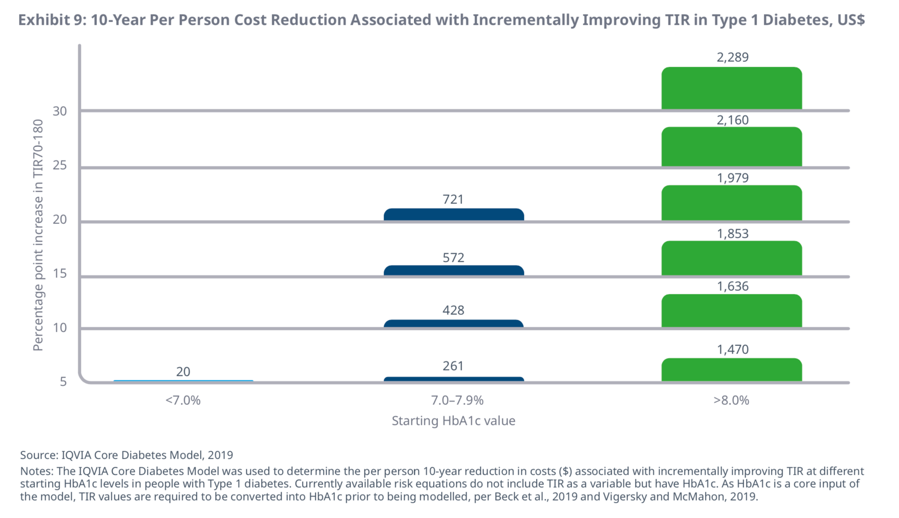 What is the Population’s Actual Time in Range Right Now?

The paper’s estimate of 58% for population TIR average came from Beck et al.’s 2019 review of four major CGM studies: JDRF CGM Trial (2008), DIAMOND (2017), REPLACE-BG (2017), and HypoDE (2018). The mean TIR across those four studies was 58%, though we would note that those studies were made up of mostly white (>90%), low baseline A1c participants (7.5%) and took place at top diabetes centers – in other words, the actual population average TIR is likely much lower than 58%. Given that improving glycemia for patients with higher A1cs and lower TIR generates greater cost savings, we think these cost reductions noted above could be severely underestimated – especially the impact of reducing extreme BGs >250 mg/dl and <54 mg/dl. All that said, this is a valuable, conservative starting point from which to build – especially once more healthcare claims data is available from CGM users. 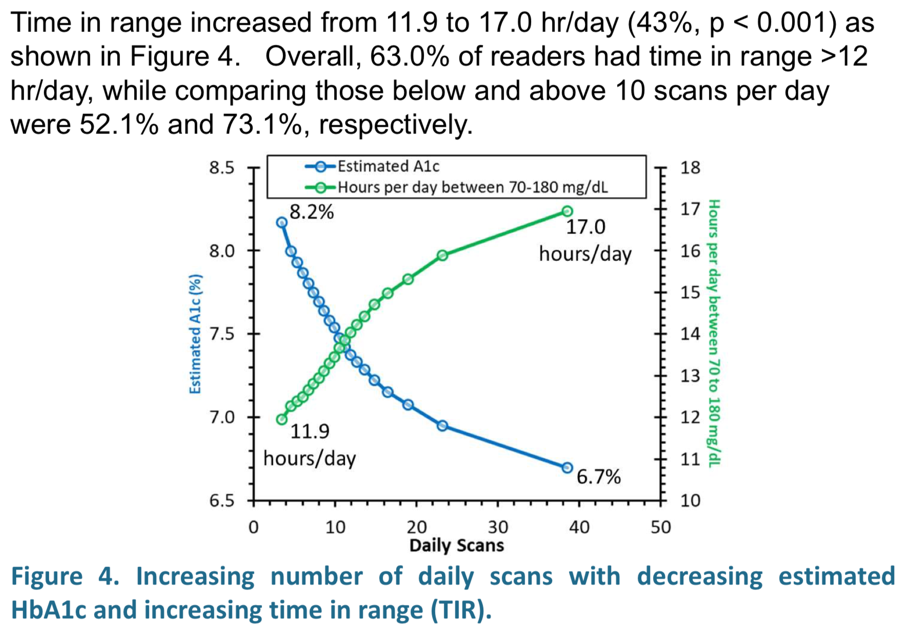 Approaches to Further Use of Time-in-Range

The paper, independently written by IQVIA with funding from Lilly, has eight pages on approaches to further the use of TIR at multiple levels, targeting healthcare policymakers, healthcare providers, and people with diabetes. The authors outline three “stages of maturity” for the use of TIR and key actions to help advance stages.