Valeritas just reported 3Q17 financial results in a press release and call led by CEO Mr. John Timberlake yesterday. Revenue for the quarter totaled $5.1 million, the second time passing the $5 million mark after a five-quarter lull, and growing 4% YOY from 3Q16 and 6% sequentially from 2Q17. Mr. Timberlake pointed out that this is the first quarter since 1Q16 in which both YOY and sequential growth was positive, despite adverse effects of Hurricanes Harvey and Irma in >12% of territories (estimated one weeks-worth of new patient starts and some refill prescriptions lost). Management still guides for full-year revenue to reach $20 million, entailing ≥$5.5 million in 4Q revenue (+15% YOY), and for acceleration in 2018, thanks to (i) the promise of the capital-efficient sales and marketing model (details below); (ii) an expanded direct-to-patient ad campaign (which providers asked for to make it easier to transfer patients!); and (iii) a 40% larger sales force to start 2018 vs. 1Q17 (~48 based sales reps to start 2018). Cash now sits at $34 million, down from $42 million in August – based on an estimated ~$8 million/quarter cash burn, Valeritas has runway through mid-2018. In September, the company also announced a common stock purchase agreement with Aspire Capital Fund, wherein the investor agreed to purchase up to $20 million in stock, whenever Valeritas desires over the next 30 months (none had been sold as of September 30). On the pipeline, management noted “great progress” continuing to work on both the V-Go Link (specific emphasis on development without increasing cost) and pre-filled, though no timing was shared. Similarly, plans to take V-Go international are still in development, as management continues to receive interest from potential distributors in multiple countries, including outside of the EU – again, no timing was speculated. Valeritas has a product that generates strong outcomes, a strong pipeline, and interest overseas – when will we see this business begin to ramp? The patch pump category in general is moving slowly, with an absence of public launch strategy for J&J’s OneTouch Via and CeQur’s PaQ, a delay for BD’s type 2 patch pump, and Insulet’s U500 Omnipod with Lilly set to launch in 2019. 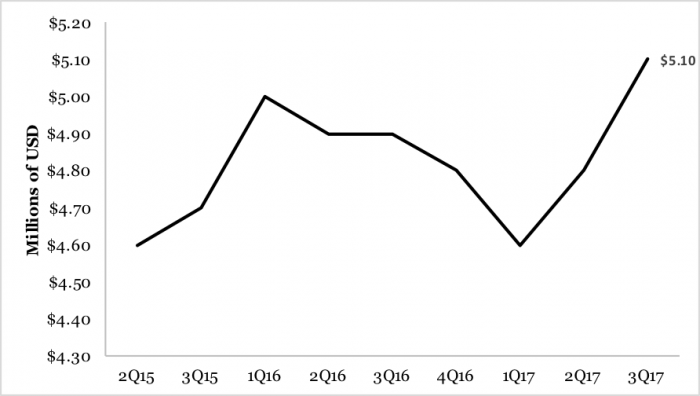