Insulet reported record 3Q17 financial results today in a call led by CEO Patrick Sullivan, CFO Michael Levitz, and President Shacey Petrovic. The company is firing on all cylinders (sales, margins, pipeline) and believes its 2021 targets are on track: $1 billion in revenue, gross margins of 70%, and above market profitability. From our view, the margins and profitability will be the most challenging and a lot will have to go right to more than double quarterly revenue. Highlights below!

Worldwide sales of $122 million grew 28% YOY in 3Q17, reaching a record high for the second straight quarter (exceeding 2Q17’s $110 million) and significantly exceeding guidance ($112-$116 million, translating to an 18-22% revenue increase). Sales also came against a challenging comparison to 3Q16’s very strong 34% YOY growth. Revenue rose 11% sequentially from the previous record in 2Q17. All three business lines contributed, though most of the beat came from OUS Omnipod. The chart below shows the business is accelerating – 28% YOY growth is the largest Insulet has seen in a year. 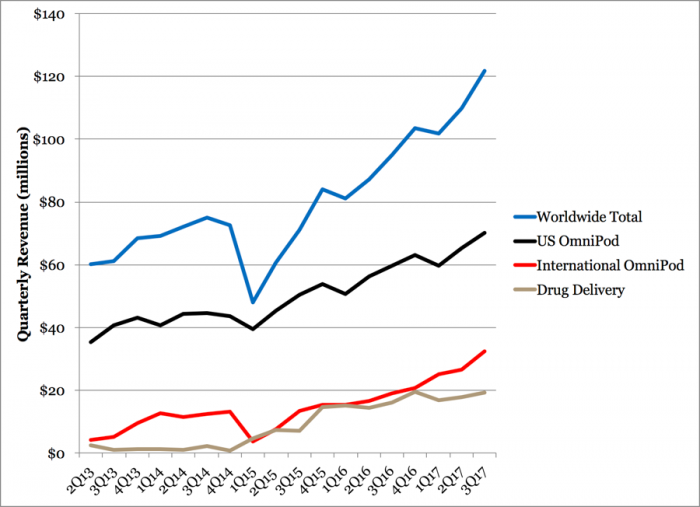 Record US Omnipod sales of $70 million grew 17% YOY and 7% sequentially in 3Q17, slightly exceeding guidance ($67-$69 million). The US installed base again grew 15% YOY in 3Q17, in line with 2017 expectations. Notably, Insulet does not expect a major impact from Animas’ exit – Ms. Petrovic noted in Q&A that pumpers are not Insulet’s target market. We love this market expanding focus although we believe that for many Animas customers, Insulet could be an excellent choice, particularly given the strong move toward the closed loop, the Dexcom CGM partnership, and the high-quality product.

International Omnipod sales of $33 million hit an all-time high for the sixth straight quarter, increasing 70% YOY, providing 50% of Insulet’s 3Q17 growth, and beating guidance substantially ($27-$28 million). The international installed base grew over 60% YOY in 2Q17, indicating the Ypsomed termination announcement has not slowed momentum. The YOY comparison was also quite challenging (+42% in 3Q16), making the growth even more notable. Sales rose 22% sequentially from the previous high in 2Q17. Omnipod momentum remains particularly strong in France, which is still ~1/3 of international patients. Overall, it is an excellent sign for Insulet that the international business continues to do well; clearly, the incentives in place as part of the mid-2018 Ypsomed expiration are working.

Sales guidance was raised significantly for the second straight quarter: 2017 revenue is now expected to grow ~25% YOY to $456-$459 million, a major ~$13 million increase at the midpoint from the previous guidance ($440-$450 million). Management cited the “exceptional” international Omnipod demand, alongside “strong” US demand. 4Q17 sales are expected to grow 20% YOY to $123-$126 million – +15% in the US ($71.5-$73.5 million), +61% outside the US ($33-$34 million), and -6% for drug delivery ($18.5 million, due to shipment timing to Amgen). These all seem reasonable and less conservative than past guidances this year (management has increased guidance each quarter – the 2017 guidance was originally fairly conservative).

Preparations are underway to go direct in Europe in mid-2018, following the Ypsomed agreement’s expiration on June 30, 2018. Management called it a “tremendous opportunity,” driving a ~50% revenue increase over what Insulet currently receives from Ypsomed. Insulet’s overall gross margin will rise a remarkable four percentage points (with half coming in 2018). This received a lot of air time today for the second straight call, a sign of how meaningful it will be to Insulet. The team is investing a lot in building the infrastructure now, and many investor questions focused on the operating expense impact. We think this is a very smart move for Insulet, given the business upside and ability to get closer to customers.

Gross margin reached 60.5% in 3Q17, a record for Insulet and a meaningful improvement from 58.7% in 3Q16. Net loss was $2.2 million in 3Q17, a 27% improvement from $3 million in 3Q16. Insulet still expects to be sustainably EBIT positive beginning next year, with a 2021 target maintained for gross margins of 70%. We do hope to see the drive to profitability intensify given that the company is in its 17th year.

The Bluetooth-enabled Omnipod Dash PDM (locked down Android phone) and pod will be submitted to the FDA “around the end of this year,” with a limited market release expected in mid-2018. The major hardware upgrade just completed its summative human factors study. The submission timing is in line with the previous plan for “4Q17,” though today’s broader language (“around the end of this year”) does leave room for the submission to spill into early 2018. (No analysts addressed this in Q&A.) This product will be critical for driving US growth in 2018 and laying the groundwork for subsequent innovation with Horizon and U200/U500. We’ve been very impressed with the user experience screenshots we’ve seen this year – see our detailed coverage of Dash from the ADA booth and Insulet’s product theater in San Diego.

The Omnipod Horizon automated glucose control system is in its third IDE study (five-day hotel trial), with a launch expected by “end of 2019” or “early 2020.” This was positioned as “no change” in Q&A, but it is definitely broader than the “2019” launch expectation we last heard at AADE and in 1Q17 (2Q17 did not give an update). Management later clarified Horizon is “two years out,” which would indeed put it in late 2019. We assume things are still in flux right now, particularly given the timing on Dash and perhaps on Dexcom’s G6. Notably, no Horizon pivotal timing was shared today – previous remarks from ADA and 1Q17 called for a “2018” pivotal. An impressive 118 patients have been studied on Horizon, quick progress! Insulet has had multiple FDA pre-submissions already – hopefully a good sign for the regulatory path ahead, and certainly pulling a page out of Medtronic’s book for the MiniMed 670G. Still, there is a lot more to execute on here, and pegging a firm launch date at this point is obviously impossible.