Medtronic reported 3Q18 (F2Q19) financial results this morning in a call led by CEO Omar Ishrak. Diabetes is slide #11, and the call’s diabetes highlights and Q&A are enclosed below. 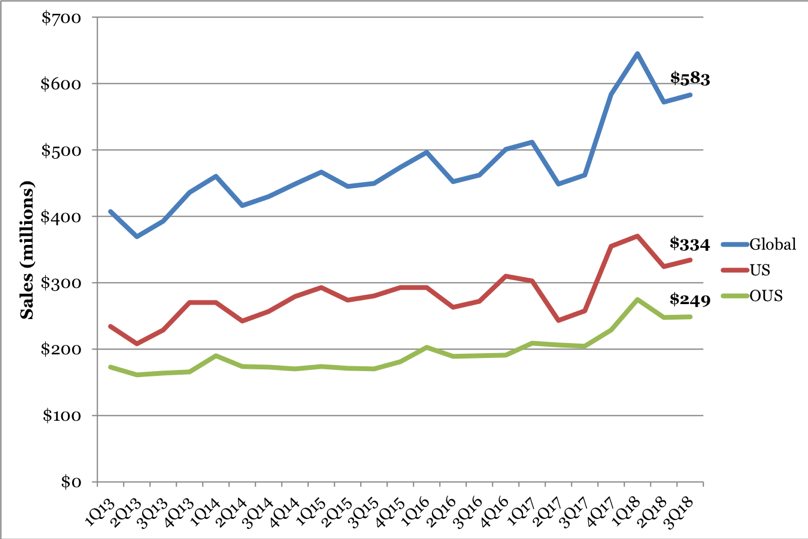 “Revenue from CGM now exceeds our pump revenue and is establishing a consistent, long-term and dependable revenue stream for our diabetes group.” This comment (under-emphasized) from CEO Omar Ishrak was the biggest highlight of the call in our view – it signals a rapid shift as Medtronic has moved closer to a CGM company that happens to sell pumps, rather than the other way around. While this has been a strategic goal for some time now, the sales crossover is a big-time milestone. Medtronic could not share specifics with us, though it’s clear our last update from the company (mid-2017) – CGM at ~25% of global sales – is now very outdated. (That would back out to ~$146 million in CGM sales vs. ~$437 million for the rest of the business.) We assume CGM sales are now well-north of 30% and perhaps even over 40% of the global business now – it is never exactly clear what Medtronic is counting under what category (some time ago, part of each pump was valued as CGM). All in all, this move might put Medtronic CGM at a ~$200 million quarterly run rate (or perhaps more), with pump sales under that and the remaining diabetes revenue from other areas (e.g., Diabeter). Medtronic could not comment on these estimates, and we’re the first to note that the revenue recognition assumptions here can get confusing – e.g., when Medtronic sells a 670G system, what is “counted” in CGM vs. pump revenue? Still, the takeaway is clear: Medtronic has built a significant ~$800 million/year business in CGM and is seeing growth via both sensor-augmented pumps and the standalone Guardian Connect. For context, Abbott’s FreeStyle Libre seems poised to break $1 billion in 2018 sales (see its 3Q18) and Dexcom expects ~$975 million in sales in 2018 (see its 3Q18) – we also think there’s certainly some chance for that business to outperform even more, though the $975 million itself reflects a fantastic annual performance – or outperformance!

In line with the EASD update, Medtronic has launched the MiniMed 670G in “several” European countries, with more international launches to come in the next six months. The specific countries were not shared, though at EASD, initial launch countries were Belgium, Denmark, Finland, Italy, Netherlands, Slovenia, Spain, Sweden, Switzerland, and UK/Ireland. Management noted that “initial user feedback has been very positive” outside the US. It’s not clear how many of the >135,000 active users are from the US vs. OUS, though we imagine it’s still <10,000 users Europe at this point (e.g., as of August, the US had over 97,000 users alone). Last month’s Health Canada approval for 670G was not mentioned, though we assume the launch expectation for “fall 2018” (i.e., by mid-December) still stands. In both Europe and Canada, Medtronic is first-to-market with hybrid closed loop, with Diabeloop poised to be second-to-market starting in France in early 2019.

Notably, Medtronic’s next-gen “advanced hybrid closed-loop system” with automated correction boluses is now expected to launch in FY20, implying availability in April 2019-April 2020. This is a meaningful ~one-year acceleration in timing from the June 2018 Analyst Meeting, which called for a launch of this next-gen system “beyond” FY20 (i.e., after April 2020). The timing is consistent, however, with the FY20 launch plan for a Bluetooth-enabled pump and a mobile display app, which it sounds like this pump will add (see Q&A comment below). It’s unclear when in the FY20 window Medtronic will launch this product, which is critical from a competitive perspective – Tandem expects to bring its no-fingerstick hybrid closed loop with automatic bolusing (Control-IQ/G6) to the US in summer 2019, which is not very far away if the timing holds. We imagine Control-IQ will launch ahead of Medtronic’s Advanced HCL, as Tandem’s pivotal trial is fully enrolled (see 3Q18). In Q&A, Mr. Hakami said three feasibility studies of advanced HCL have been done. The NIH-funded FLAIR trial – comparing advanced HCL to the 670G – has an updated start date of March 30, 2019, with completion expected by December 31, 2019. The ClinicalTrials.gov page also lists FDA as a collaborator, which could imply FLAIR will serve as the Advanced HCL pivotal. Indeed, the crossover trial will enroll n=112 participants at seven big-name centers with three months on each system. Medtronic’s goal remains to deliver >80% time-in-range with this product, in line with Dr. Fran Kaufman’s commentary from Keystone. This will finally bring to market the DreaMed fuzzy logic algorithm combined with the 670G’s basal modulation.

2. Sugar.IQ Hypoglycemia Prediction: On Track to Launch by April 2019

In line with the Analyst Meeting, the long-awaited Sugar.IQ hypoglycemia prediction feature is expected to launch by April 2019 (“in the back half of this fiscal year”). The four-hour prediction feature is designed for the companion app for Guardian Connect users: “You are expected to experience a low within the next four hours.” This hypoglycemia prediction has long been a big – and cool! – selling pitch of Medtronic/IBM’s Sugar.IQ, but is running almost two years behind the 2016 Analyst Day hope to launch by “summer 2017.” It will be fascinating to see how much of a value-add this feature is for its standalone CGM – Medtronic has previously claimed ~90% hypoglycemia prediction accuracy, though notification fatigue and continued Sugar.IQ engagement will be key to watch. Of course, for those at high risk of severe hypoglycemia, this could make a very meaningful difference.

Though not mentioned on the call, the diabetes slide said a Guardian Connect CGM app for Android will be available between now and April 2019 (“H2 FY19”). To date, the standalone CGM app has only been on Apple iOS, a competitive disadvantage relative to Android apps for FreeStyle Libre, G5/G6, and Eversense.

No timing was shared on Medtronic’s next-gen CGM sensors, though the company continues to move towards non-adjunctive labeling, iCGM labeling, reduced need for calibration, smaller and longer-lasting, and using IBM Watson to enhance personalized insights. From our view, Medtronic is ahead of the competition on analytics, but well behind on form factor and factory calibration. In Q&A, Mr. Hakami said the next-gen CGM timing is on schedule with the 2018 Analyst Meeting expectations:

Q: There's been a lot of noise on two of your key product lines in the market this quarter both in diabetes from some competitors about the timing of your next-generation pump and then in this spinal cord stim market about what the true growth on a volume basis is there. You put up great results in both, so can you talk about the sustainability of the spinal cord stim market growth and then comment on reiteration of the fiscal year 2020 for your next-generation pump?

Hooman Hakami (EVP, Diabetes Group): On Diabetes, your question about our advanced hybrid closed loop systems, there's been no change to the timing of that product versus what we said at Analyst Day and also at ADA. We know who is communicating this information and it’s just incorrect. There's no changes from the timeline and it's just as simple as that. I'd say beyond those timelines we’re just really excited by what this technology and what this product promises to bring. We’ve done a lot of work, we've got three feasibility studies done, those feasibility studies indicate a time and range that is close to 80%. To put that in context, the person without diabetes has a time-in-range of 85%, so we're really excited about that. And we take a look and compare our performance against published data from what’s out there on competitive systems, our nearest competitor is going to have a time-in-range that's less than what we have with our 670G system and with a higher targeted glucose range. So timelines are holding. We're making great progress, and we’re excited about what this system's going to be able to do.

Omar Ishrak (CEO): Let me also add that we are very excited about these two segments. We're going to own these segments, and I am personally engaged with both of these groups on a very regular basis. I'm interested in it, and I'm very confident that we will not only introduce these products, as we talked about, with the features that we talked about, but we will lead in these markets.

Q: It looks like the implied second-half guidance for Diabetes is mid-single digits. I know it’s high-single digits for the third quarter but a little lower in the fourth quarter just on an implied basis. Is that how we should think about Diabetes going forward? And is there any update on the Harmony Sensor timeline? And what's the regulatory pathway for Harmony and 690G? I heard the fiscal 2020 launch.

Mr. Hakami: As far as the back half goes, you heard that we’re reiterating from Karen the fact that we expect to grow for the full year low-to-mid-teens. This obviously translates to an applied deceleration of growth from what we've seen over the past four quarters. There's no doubt about that. But let me just remind you that, if you go back to last year, during the first half of last year, we had CGM capacity constraints that prevented us from not only meeting full CGM demand, but also pump and integrated CGM system demand. Then, we started to increase that capacity in Q3 of last year, and we’re at full capacity in Q4. And so we had a lot of pent-up demand. We had some backorders. And so that revenue catch-up that basically came in the back half of last year is impacting our comps for the back half of this year.

The other dynamic I'd point out is Animas. We are anniversary-ing two out of the three revenue components in Q3 of this year. So all of the consumables revenues, all of the out-of-warrantee conversions are really going to no longer provide a year-over-year benefit. Now, that's just commentary on comps, but if you take a look at it, there's going to be these quarterly fluctuations. We're really excited about the opportunity that we have here. We talked about our pipeline, Advanced Hybrid Closed Loop in FY 2020, which we're committed to delivering. This is a multiyear growth opportunity for us, for the company. And we intend to innovate and to lead.

Now very quickly from a CGM perspective, what you’re going to see from us are sensors that are going to come out with non-adjunctive labeling, iCGM standard. And then following that, what we're going to achieve are smaller sensors, longer-life sensors with continued accuracy that also feed in cognitive capability into it. And so as far as the sensor pipeline goes, there's really been no change versus what we've said at either the Analyst Day or ADA, and the teams are executing against the plan that we laid out.