Ypsomed announced financial results for the first half of fiscal year 2020 (April 1, 2019 to September 30, 2019) on a call led by CEO Mr. Simon Michel. See all our top highlights below.

Overall Ypsomed sales of CHF 191 million (~$193 million) declined 26% YOY, driven by a 51% YOY decline in Diabetes Care revenue. Diabetes Care revenue totaled CHF 92 million (~$93 million), down 51% YOY on a tough comparison to 28% YOY growth in F1H19. As a reminder, Ypsomed’s distribution agreement with Insulet delivered CHF 101 million (~$102 million) in revenue during F1H19, including a $50 million exit fee paid by Insulet to Ypsomed with the expiration of agreement. Removing the Omnipod-related revenue from F1H19, revenue from Ypsomed’s continuing operations in Diabetes Care actually rose a solid 14% YOY. Ypsomed is still seeing some revenue from Omnipod as Ypsomed-owned DiaExpert is Insulet’s distribution partner in Germany; that channel generated sales growth of CHF 11 million for Ypsomed in F1H20. The Delivery Systems business grew a robust 34% to CHF 91 million on an easy comparison to 9% growth in F1H19. 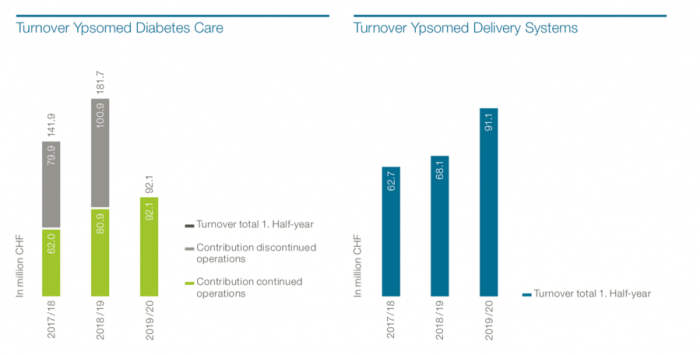 2. Arbitration Proceedings with Insulet to Continue Until 2021 for CHF 45 Million in Expected Compensation

Ypsomed initiated arbitration proceedings against Insulet in December 2018. Insulet was expected to transfer CHF 50 million (~$50 million) to Ypsomed as compensation for establishing Insulet’s European distribution structure. This expected income was booked by Ypsomed already, but Insulet has only paid Ypsomed ~$5 million so far. The arbitration is expected to last until 2021 for the collection of an expected balance ~$45 million. As part of the arbitration, Insulet issued a counterclaim for $19.7 million, citing “insufficient sales efforts” (per Ypsomed’s update). Insulet has not talked about this on recent earnings calls.

1. YpsoPump to Launch “Mid-2021” in US with CGM Partner; YpsoPump SmartLoop (Hybrid Closed Loop) Trial to Begin by End of Year

In a major update to YpsoPump’s US timeline, the company now expects to submit its tubed pump to the FDA by the end of the 2020 (Calendar), with expected approval in “mid-2021.” That timeline is in line with Ypsomed’s May update, though the touchscreen durable pump was originally filed with the FDA back at the end of May 2018, with launch in “summer 2019.” Of course, the pump landscape has changed meaningfully in 2019 with the creation of the ACE Pump indication – both Tandem’s t:slim X2 in February and Insulet’s Omnipod Dash in September. Notably, Mr. Michel stated that Ypsomed is collaborating with “one of the two [US] CGM companies” to create a more compelling product. Presumably this is either Dexcom or Abbott but there was no information on this. He pointed to Tandem, in particular, as a company that was really pushing the envelope with CGM integration and emphasized the need for YpsoPump to have CGM partners to help compete in the US market.

Though briefly mentioned on the call, there were no notable updates on Ypsomed’s tubeless patch pump. Per the FY19 Annual Report, design implementation of the YpsoPod patch pump was expected to have completed by F1H20 – it’s possible that has not happened, as given no update. In the last update, the device was expected to launch in late 2022/2023, though this timeline is quite far out and will undoubtedly change. The device aims to be distinct from Insulet’s fully disposable, tubeless Omnipod and “similar to [Roche’s] Solo.” Manufacturing patch pumps at scale and obtaining regulatory approval is no easy task (e.g., BD’s much-delayed type 2 patch pump), so we’ll be eager to see if Ypsomed can execute on this. 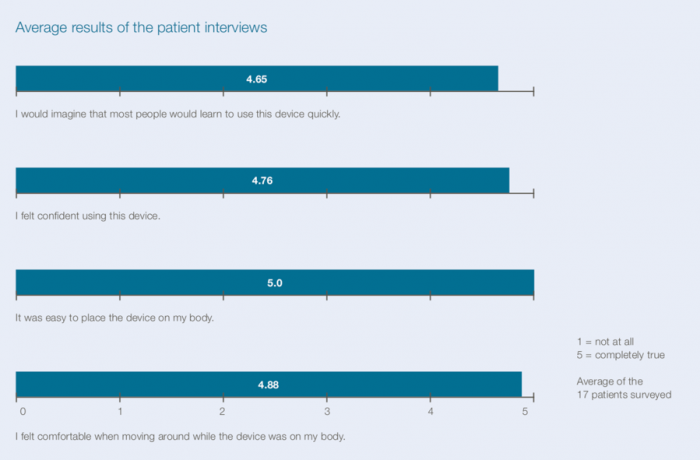