Tandem’s 2Q18 sales of $34 million rose an impressive 60% year-over-year (YOY), albeit vs. an easy comparison to a 7% decline in sales in 2Q17. Sales rose a strong 25% sequentially from an already-robust 1Q18, a terrific sign of momentum entering 2H18 as Basal-IQ with Dexcom G6 integration launches in August. This represented the second-highest sales in Tandem’s history, only shy of the blowout record $40 million in 4Q17. Tandem also handily crossed $30 million this quarter, only the second time it has ever crossed this milestone (the other being 4Q17). Pump sales came in at $21 million (62% of total sales), with supply sales of $13 million comprising the remainder; both grew in line with overall revenue, a positive sign. Given 5,447 pumps shipped, this also implies Tandem is receiving just under $4,000 per pump. 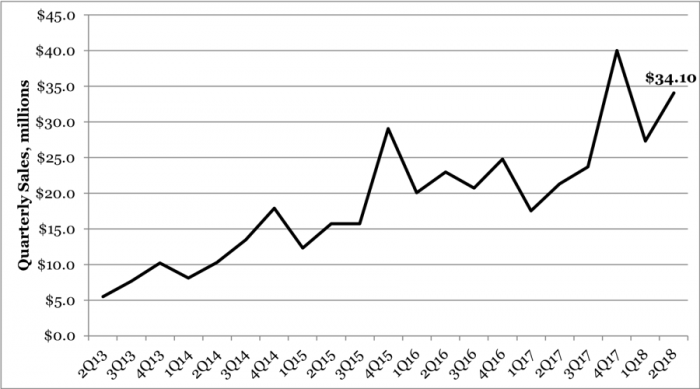 Tandem shipped 5,447 pumps in 2Q18, a 59% YOY gain from 3,427 pumps shipped in 2Q17. This brings the estimated “active installed base” to over 66,000 users (pumps shipped in the last four years), and total pumps since inception to over 78,000. In line with sales, pump shipments increased 23% sequentially from 1Q17. Consistent with 4Q17 and 1Q18, “about half” of Tandem’s organic new customers (i.e., non-renewal) came from MDI, a great sign for expanding the market – this is down from 60% a year ago, when Tandem was not converting so many current pump customers, presumably mainly Medtronic. Tandem estimates it has a 12% pump market share in the US, implying a US pump market of ~550,000 users (assuming Tandem is using the more conservative installed base figure of 66,000). 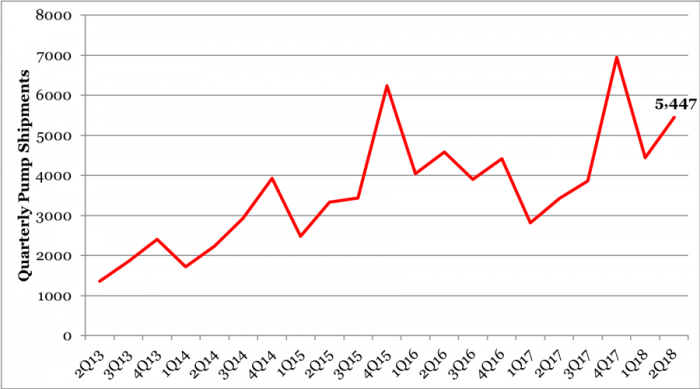 In a meaningful vote of confidence entering 2H18, Tandem has raised its 2018 sales guidance ~6% to $140-$148 million, an $8 million boost from the previous $132-$140 million. This translates to expected 2018 growth of 30%-38% YOY, up markedly from the previous expectation for 26% YOY growth. The confidence stems from “enthusiasm” for Basal-IQ (pipeline not quantified) and what Tandem expects for renewals and growth in infusion set sales. Tandem expects the usual seasonal trend, with more sales in 2H18 and especially in Q4. For context, Tandem’s 1H18 sales are ~43% of the way to the new guidance’s midpoint, meaning this is not conservative guidance – it does need to execute well on Basal-IQ’s launch to hit this. Tandem is well ahead of where it was in 2017 – when only 38% of its sales came in 1H17 – however, it had a rough start to 2017 and picked things up meaningfully in 2H17. The new guidance range reflects “only modest expectations for OUS sales” this year, in line with previous comments. We think the guidance is definitely achievable given Basal-IQ and no major competitive products expected from Medtronic or Insulet in 2H18. (Dash is only in limited market release in 2H18.)

Tandem’s cash position continues to improve: as of June 30, it had ~$97 million in cash and equivalents, up from $82 million at the end of 1Q18. This reflects additional warrants exercised in 2Q18 (+$22 million in proceeds, way ahead of schedule), minus net cash use of only $8 million in the quarter – wow! The business is also showing nice operating leverage – operating expenses increased 8% YOY compared to 60% YOY revenue growth, which is fantastic progress. Tandem continues to believe it has enough financial resources to get to cash-flow breakeven in 2H19. The latter rests on two main assumptions: (i) Tandem has an installed base of at least 80,000 customers ordering supplies on a consistent basis (it’s already over 66,000); and (ii) gross margins get to 55% (currently at 44%). The installed base number is very doable, given the pipeline (see below) and OUS entry, the current base of >66,000 customers, and growth guidance for the rest of this year alone. Better than expected revenue will also obviously help.

Following a CE Mark in April for the t:slim X2 pump with Dexcom G5 integration, an international launch is expected in the “upcoming months.” Management reiterated the previous “2H18” launch expectation, with “modest” OUS sales this year. Tandem has signed distributor contracts for Europe (UK, Spain, Italy, Scandinavia), Australia/New Zealand, and South Africa. There was no update on Health Canada approval, which was submitted in February. However, the 10-Q filing specifically mentions the 2H18 OU launch will include Canada. Tandem has never given OUS timing expectations on G6 integration, Basal-IQ, or Control-IQ.

6. Comments on the US Competitive Pump Environment

CEO Kim Blickenstaff and CFO Leigh Vosseller had multiple comments on the US pump environment, touching on Medtronic and the importance of the next 1-2 years for Tandem to capture share:

In line with the exciting FDA approval just before ADA, Tandem will begin shipping the t:slim X2 with Basal-IQ (predictive low glucose suspend) and Dexcom G6 integration in August. The August launch for users 6+ years will include new pumps shipped with the Basal-IQ algorithm and G6 integration, as well as a free home software update for in-warranty t:slim X2 users. Management highlighted this as the first pump compatible with FDA’s new iCGM pathway (Dexcom’s G6), a huge victory for Tandem and well ahead of the initial goal to separately add this before the end of the year. CEO Kim Blickenstaff also noted that for current users, Basal-IQ only has “one additional screen for users to learn,” and the online training typically takes only 30-45 minutes – nice! 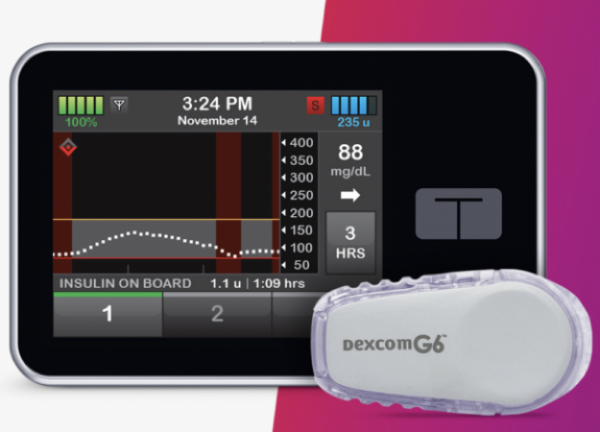 As noted in our ADA coverage, the pivotal study of Tandem’s second-gen AID system, Control-IQ, is now enrolling – ClinicalTrials.gov post here. A US launch of the hybrid closed loop with Dexcom’s G6/TypeZero algorithm (automatic correction boluses included!) is now expected in “summer 2019.” This is delayed from the previous goal to launch in “1H19,” though not too big. (Technically a June 21-30, 2019 launch would hit both “1H19” and “summer 2019,” though this seems less likely since the study is expected to wrap up in April.) Even if Control-IQ launches in late summer 2019 (e.g., August, just like Basal-IQ), it will very likely be the second hybrid closed loop on the US market – see our AID landscape here.