This morning, Dexcom announced long-awaited FDA approval of the G5 mobile app for Android devices. A US launch will commence this month on the most popular Android phones currently on the market, including “several” from Samsung (Galaxy, Note), Motorola (Nexus), and LG (G4, G5). Notably, Dexcom’s G5 app will also display data on Android Wear watches – nice! Today’s approval is on the early side of 1Q17 expectations for “mid-year” and just in time for ADA.

For Dexcom, this FDA review was fairly lengthy following the 3Q16 submission, which underscores how big of a deal it is to put a class III CGM app on Android – testing so many phone models is a big effort. FDA is also highly under-resourced, and Android is definitely less familiar territory for CGM. Unquestionably, it is a lot of work to develop, maintain, and build out CGM apps for one platform, let alone both iOS and Android and their ever-changing operating systems and growing list of devices. For context, G5 Mobile originally launched for Apple’s iOS in late 2015, meaning Android is coming to market ~1.5 years later.

This approval could significantly expand G5 mobile adoption: according to the oft-cited Kantar World Panel, Android accounted for 59% of smartphone sales in the US in 1Q17 vs. 39% for Apple’s iOS (see the cool data visualization here, which trends over time). This dominant market share is actually on the lower side over the past few years, as Android’s quarterly share of sales is regularly in the mid-60% range.

For Dexcom, we assume Android G5 is baked into 2017 revenue guidance expectations – sales of $710-$740 million, reflecting 25%-30% YOY growth – though it will be fascinating to see if this launch accelerates new patient growth. Have some users been waiting for Android G5 to start on CGM? Of course, it will also serve as a convenience win (and passive data upload victory) for current G5 receiver users that have Android phones.

Today’s news is also a regulatory milestone, as it makes G5 Mobile the first class III Android app in the US to display CGM data and communicate directly with a CGM transmitter. Android G5 launched outside the US earlier this year, and our first demo at ATTD showed a pretty identical user experience to the Apple iOS version. See the picture below from Dexcom’s UK website.

Finally, this is a clear win for Dexcom’s Verily partnership, giving it an approved Android app to drive passive data upload, analytics, and behavior change with real-time CGM. The first-gen Dexcom/Verily sensor is expected to launch by the end of 2018 and talk directly to smartphones via Bluetooth (14-day wear, factory calibrated, real-time, fully disposable, lower cost). Today’s approval de-risks some of that regulatory process, as we assume it will most certainly launch on Android. Obviously, Verily is the perfect partner for building outstanding Android apps to expand CGM adoption! We also wonder if Dexcom’s transmitter will be able to talk directly to Android Watches in the future (no smartphone nearby necessary), just as Apple announced this week will be possible on WatchOS4. 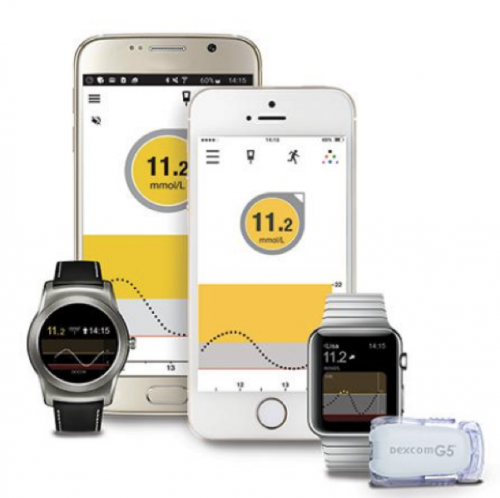 Q: To what extent will G5 Android expand adoption of Dexcom CGM? How many potential Dexcom CGM users will now get on G5 with this approval?

Q: Will G5 Android protect Dexcom against competition from Medtronic and Abbott?

Q: How will Verily and Dexcom build on this app with their first-gen sensor?